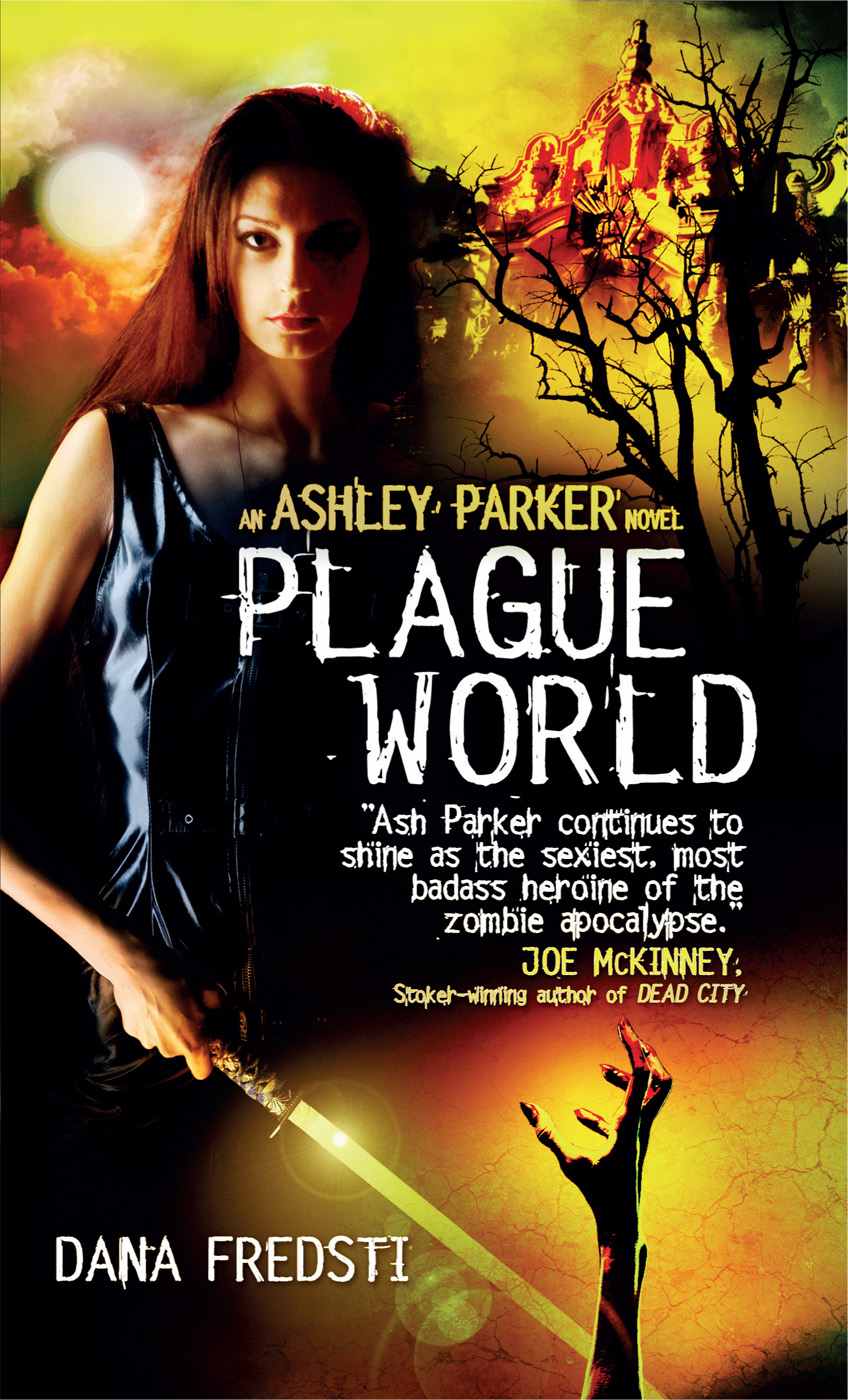 “Fast, furious, and fun:
Plague Nation
takes the promise of
Plague Town
and builds upon it, delivering bigger and better zombie mayhem.”

“If you like your heroines smart and sassy and kick ass capable, Ashley Parker has what you need. And
Plague Nation
is exactly what the zombie genre needed.”

“Snarky humor, lots of zombies (gore and all), and plenty of edge-of-your-seat action.”

One of the Top Ten Zombie Releases of 2012

“A gruesomely good read that has me panting for the next book in the series. As hard to put down as a swarm of zombies.

“In
Plague Town
, Dana Fredsti has created something truly unique in the world of horror fiction—a cool, hip zombie apocalypse novel. With crisp writing, a cast of memorable characters, and tons of undead combat action, it’s a zombie lover’s literary dream. When the dead rise, I’ll want the wild cards by my side.”

“Fredsti’s writing is razor sharp as her heroes fight off the horde while fighting their attraction for each other.”

“
Plague Town
is a fast-moving zombie tale that reads like a blast of energy. If you like zombie apocalypse stories, this is a must read!”

“Dana Fredsti has created a world as familiar as our own back yard and populated it with recognizable people we care about… and zombies.
Plague Town
will have you turning pages fast… and checking the locks on all the doors.”

RAY GARTON, author of LIVE GIRLS and SEX AND VIOLENCE IN HOLLYWOOD

“As adorable an end of the world as you’re liable to get… a brisk, witty ultraviolent romantic gurlventure…”

GINA MCQUEEN, author of OPPOSITE SEX and APOCALYPSE AS FOREPLAY

“More action than season two of
The Walking Dead
.”

“A diverting, entertaining zombie siege novel—complete with all the delicious, bone-crunching, blood-gushing awesomeness a zombie lover could ever want.”

“While
Plague Town
is a really fun and action-packed ride, one cannot dismiss the darkness at the center of it all. There are sections laced throughout written from the perspective of the innocent people as they are turning into zombies… an emotional core that grounds the novel and keeps it from being just a shallow action/horror romp.”

“If you love zombies, strong, sarcastic heroines with heart, and fight scenes that will knock your socks off, you’ll devour
Plague Town
!”

“If you like butt-kicking heroines with a fair dose of snark and humor, then you’re going to love Ashley.”

Murder For Hire: The Peruvian Pigeon

Dana Fredsti asserts the moral right to be identified as the author of this work.

Did you enjoy this book? We love to hear from our readers.
Please email us at
[email protected]
or write to us at Reader Feedback at the above address.

To receive advance information, news, competitions, and exclusive offers online, please sign up for the Titan newsletter on our website:
www.titanbooks.com

Stavros tried to tune out the hacking coughs, snuffles, snorts and other unpleasant sounds coming from the four passengers he’d picked up at Chelsea Physic Garden. Two women and two men, all wearing power suits and sharing what seemed to be a nasty cold.

Blow your nose, mate
, he thought as one of the men gave a snorting inhalation that sounded like a walrus.

He thought about raising the window that separated the driver and passenger portions of the town car, but it seemed a bit rude. It might be taken the wrong way, and one of these corporate types would no doubt complain. So he contented himself with surreptitiously pressing the pump on his ever-present hand sanitizer, tucked into one of the cup holders under the control panel.

There was something about these wankers in their suits, fresh out of their oh-so-important meetings, and the self-importance that pumped them up. It just set Stavros’s hackles on end. All the little slights and the condescension in their voices when they spoke to him… if they bothered to speak to him at all.

He didn’t regret skipping university. He didn’t have any desire to do more than he was doing, but every now and then he wished he had a degree that would allow him to slap one of these posers across their over-educated faces.

Another twenty minutes on the road and he’d be rid of them at Heathrow, so they could spread their germs in their own countries and not make an honest working man too sick to do his job.

Danny sat in the furthest seat in the back of the town car, huddled against the door in a ball of misery. He’d been sick before, but nothing compared to this—not even the four-day salmonella marathon he’d had in 2005. His body hurt inside and out; even his eyeballs felt as if they were going to crack in half if he blinked.

A line from the Haunted Mansion ride was stuck in his brain, something about hot and cold running chills… He had those, along with the sensation of boiling poison running through his veins and in his forehead.

He opened his eyes to see Jan from Digital Media, Holland Division, eying him with superficial concern. Jan was one of those uber-competitive guys who equated the failure of his peers with personal gain. He also made it more than obvious that he lusted after Nita from R&D Sweden, whom Danny had been seeing on the sly for the last year. Jan had made a few comments at the LP meeting, hinting that he knew about the relationship.

Jan smirked with an unattractive twist of his lips that he imagined made him look wry and sexy.

If he hadn’t felt so shitty, Danny would have flipped the asshole off. He closed his eyes instead, and drifted away on a wave of pain that faded into blackness.

Jan raised an eyebrow and smirked. Danny looked like shit. And he’d been the first to come down with the flu at the annual LP meeting, spreading it around quickly, judging from the coughs and sniffles of many fellow attendees. This was a flu bug that would get to see the world. Maybe Jan should start calling him Typhoid Danny, so no one forgot where it started.

Oh yes, the kind of thing that could dog a person throughout their career… and perhaps even shorten it.

Jan chuckled to himself, only to have the laugh cut off by a sudden tickling in the back of his throat and nose. He sneezed violently, barely catching it behind one hand. His smugness evaporated at the sight of blood mixed in with the spray of spittle on his palm.

And then Danny went into convulsions.

Stavros frowned as he heard yet more coughing from the back of the town car. Had they never heard of Hall’s?

The sharp note of concern in the man’s voice caught Stavros’s attention. He glanced back to see the lanky Dutch fellow in the back shaking his seatmate by one shoulder. Blood dribbled out of the man’s eyes, nose, and mouth, his features slack and lifeless.

Ellis Peters - George Felse 06 - Black Is The Colour Of My True Love's Heart by Ellis Peters
Moon White: Color Me Enchanted with Bonus Content by Carlson, Melody
Unprotected by Kristin Lee Johnson
The Touch of Bliss — A Sensual Reckoning (Muse of Shadow) by Alba, Caelyn
Game Over (The Baltimore Banners Book 2) by Lisa B. Kamps
Bind Our Loving Souls by April Marcom
Outlaw's Bride by Lori Copeland
Cole's Montana Bride (Sweet,clean Western Historical Romance)(Montana Ranchers and Brides Series Book 7) by Maya Stirling
Logan's Story: A Sand & Clay Prequel by Sarah Robinson
This Is How I Find Her by Sara Polsky