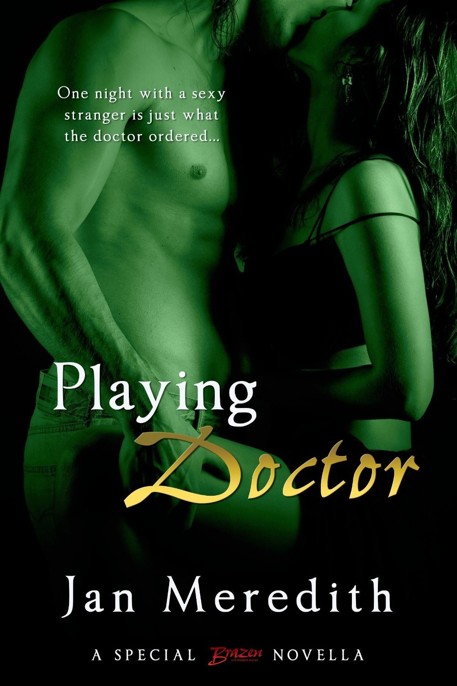 One night with a sexy stranger is just what the doctor ordered...

When a fellow RN predicts Beth Roberts will meet a tall, ripped, and totally lick-o-licious stranger who will fulfill her deepest desires, she laughs it off. Given her tragic love life, Beth has no desire to become involved again. But who could have predicted the doctor with the mischievous smile she meets at a wedding, or the chemistry sparking between them that threatens to break through her defenses?

Dr. Gabriel North spent two years blaming himself for his wife’s death. Having finally battled through the guilt and overcome his demons, he’s ready to move on. When he meets a sexy nurse at his friend’s wedding, the attraction is swift and strong, and he wastes no time in pressing his advantage. One night with the woman who makes him feel alive again isn’t enough, but gaining her trust is going to take more than medical school prepared him for…

If you love sexy romance, one-click these steamy Brazen releases…

His Risk to Take

Copyright © 2013 by Jan Meredith. All rights reserved, including the right to reproduce, distribute, or transmit in any form or by any means. For information regarding subsidiary rights, please contact the Publisher.

Brazen is an imprint of Entangled Publishing, LLC. For more information on our titles, visit
www.brazenbooks.com
.

This book is dedicated to the men in my life: my sons, Phillip and Justin for their faith and encouragement in anything I do, and Tommy, my husband, for watching so much TV alone, eating whatever I throw on his plate, and just being there for me. You guys are my life.

“One word frees us of all the weight and pain of life;
that word is love.”

Scooting her chair closer to the table, Beth Roberts bit back a grin and watched their server wind her way through the early morning diners. Connie was looking at her as though she’d turned down an all-night sextravaganza with Hugh Jackman.

“Okay, back up a minute.” Connie waved her hands as if clearing a chalkboard. The clatter of cutlery against plates and conversation from neighboring diners did little to drown the disbelief in her voice. “You’re driving up to Lexington to help your son do a wedding shoot, but Drew has made last-minute plans to tour the University of Kentucky and hang out with his friends the whole weekend.”

“So…you have a suite at the Hilton, compliments of the parents of the groom, for the entire weekend and you plan on spending it…
alone?”
Pushing her coffee to the side so their server could set her breakfast on the table, Connie shook her head. “There’s something definitely wrong with this scenario.”

“Yeah?” With a smile of thanks for the server, Beth unwrapped her silverware from the napkin. “And that would be…?”

“The part where you go back to the Hilton alone.”

Beth added a dollop of cream to her coffee and chased it with her spoon. She loved joining Connie for their weekly breakfast get-togethers at Cracker Barrel. Not only was she one of Beth’s top nurses at Ridgemount ER, she was also her dearest friend. There were no secrets between them. Theirs was a nothing-is-sacred, no-holds-barred friendship that had persevered since grade school.

When Beth became pregnant in her senior year of high school, Connie had stood as maid of honor at her wedding with Jamie. Three years later, when his unit deployed to Afghanistan, Connie had wept with her at the airport, and then held her hand when he returned a changed man, withdrawn and bitter. When Jamie’s anger eventually focused on Beth, turning abusive and claiming the life of their unborn child and later that night his own life as well, Connie was at her side when she’d laid them both to rest.

“You’re missing the point of the trip.” Beth drizzled maple syrup over her pancakes and sliced off a wedge with her fork. “This isn’t about me. It’s about Drew.” He had been so excited about his first paid freelance job, Beth had thought she’d have to peel him off the ceiling when, after shooting his teacher’s wedding, her maid of honor contacted him to do hers as well.

Connie gestured with her spoon. “I’m not missing anything. Drew’s a great kid and one hell of a photographer. I totally agree that this is a kick-ass opportunity for him, but there’s no reason this trip can’t be about you, too.”

Beth studied the bowl of opaque goo beside Connie’s plate. “How can anyone consider a dish called
grits
appetizing?”

“How can you call yourself southern and not like grits?” she countered.

“Just because I’m from Kentucky doesn’t mean I have to…don’t push that stuff over here. Stop it!”

Laughing, Connie shoveled a spoonful of grits into her mouth and swallowed. “Yum. Now, back to staying at the hotel by yourself…”

Beth sighed. The girl never gave up. “I’m perfectly fine with spending the weekend alone,” she said. “I’m going to enjoy a nice, relaxing evening sipping wine and soaking in the Jacuzzi until I’m limp as a noodle while Jace Everett croons
Bad Things
to me on my iPod. Then I have the staffing schedule to work on, resumes and applications to review for potential new hires…”

Connie snorted. “Well, that just sounds like tons of fun. I know that’s how I’d want to spend my weekend out of town.”

Sadly, having actually said it aloud, Beth had to agree. When Drew had told her of his plans to hang with the guys and check out the campus, the prospect of a weekend of peace and quiet with room service a phone call away had sounded like a dream come true. Now, the more she thought about it, the less appealing it became.

After Jamie’s death, Beth had centered her existence on Drew and her job, determined to gather the shattered remnants of her life and move forward. Entering into another relationship with a man hadn’t factored into the plan. Now Drew was developing his own social life and making plans for college. In another year he would move out, and for the first time in her thirty-three years, Beth would be truly alone. Her heart hurt a little at the thought. Pre-empty-nest syndrome setting in? Maybe, but over the past few months she had come to understand the quote,
you don’t have to be alone to be lonely.
Lately she had been feeling a little…antsy. Kind of…restless.

There. She’d said it. Well, not out loud, but even the self-acknowledgment was liberating.

She missed sex. Everything about it—the rush of discovering mutual attraction, flirting, the push-pull dance of will-we-or-won’t-we, the brush of bodies as boundaries are tested and established, then carefully breached.

And kissing. Oh, God, she loved the feel of a man’s mouth against her lips, on her skin. She and Jamie had shared a healthy, vigorous sex life. Until he returned home from the Army. Then everything had changed.

Sharing the revelation with Connie, however, was out of the question. Her friend was just waiting, ready to pounce at the opportunity to reintroduce Beth to the dating scene. She would get to it, but in her own way, and in her own sweet time.

Connie, her sleek brown hair pulled back in a ponytail that would inevitably end up off-center before the end of her shift, drummed her fingers on the tabletop. “Your plan has potential, but is sadly flawed, my friend. It lacks imagination and has no spark, no sex. Now, if it were my plan, I would hook up with one of the groomsmen…”

Beth’s jaw dropped. It didn’t take a GPS to see where Connie was going with this. “Please tell me you’re not suggesting that I…have a one night stand with a stranger.”

“I’m not suggesting anything of the sort. Did I not say, if it were
my
plan?”

Beth sat back in her chair and held up a hand for peace. Once Connie bit into a subject, she hung onto it like a bull terrier. “Then by all means, please continue.”

“Thank you,” Connie gave Beth a queenly nod. “Now, where was I before I was so rudely interrupted? Oh, yeah…I would hook up with one of the groomsmen and take him back to the Hilton where he’d do bad things to me in the Jacuzzi until
he
was limp as a noodle. And forget
sipping
wine.” Warming to the subject, Connie closed her eyes as if visualizing the scene. “I would lick it out of his belly button—a perfect innie.” She made a little circle with her index finger.

Connie painted a vividly appealing picture, and Beth had no problem taking the scene a bit further. That fine line of silken hair just below his navel would tempt her. She would follow it with her tongue, straight down to his…

Beth jolted back to reality as a nearby toddler banged on a highchair and made his or her wishes known. While her friend’s sexy scenario held a definite appeal, Beth felt obligated and just ornery enough to inject a little reality into fantasy.

“Eeewww!” Connie opened one aggrieved eye and aimed it at Beth. “There is no belly button lint on this man. And let’s ditch the noodle part, too, because there is nothing
limp
in this fantasy, either. I would lick the wine off his big…throbbing…” she waggled her brows, “
clock
.”

“Connie!” The witch. She’d known exactly what Beth had been thinking. She glanced around to see if any of the neighboring diners had heard her remark.

“Pfft.” Connie cocked her thumb toward the wooden partition separating the dining areas. From the other side, the toddler continued to wail and bang a spoon on the highchair tray. “No one can hear me over that. Besides, the kid said it first.”

The conversation paused when their server stopped at their table, topped off their coffee, and handed out their checks before moving on to the next table.

“Sounds like you’ve got this weekend all worked out.” Beth slid a tip for the server under the salt shaker. “Why don’t you go in my place, and I’ll pull your shifts in the ER?”

“No way. I’m not into cockblocking.”

A startled laugh escaped Beth’s throat. “I’m not sure a girl can even get cockblocked. Isn’t that a guy thing?”

“Semantics.” Connie shrugged. “The point is, there could and should be one involved. If only we could see into the future.” Squinting her eyes, she pressed her fingers to her temples and said, “I predict that you, Beth Roberts, will meet a tall, ripped, and totally lick-o-licious stranger who will fulfill your deepest desires…from across a crowded room.” She grinned. “And wouldn’t that be impressive?”

The McGilley Trilogy by B. J. Wane
Zombie Surf Commandos from Mars! by Tony Abbott
Grizzly by Will Collins
The Courage to Love Her Army Doc by Karin Baine
Riverwatch by Joseph Nassise
Last Call for Blackford Oakes by Buckley, William F.;
WILDER: A Rockstar Romance by Lux, Vivian
The Gryphon Project by Carrie Mac
Sensuous Stories by Keziah Hill
His Confession (By His Command #8) by Ana W. Fawkes