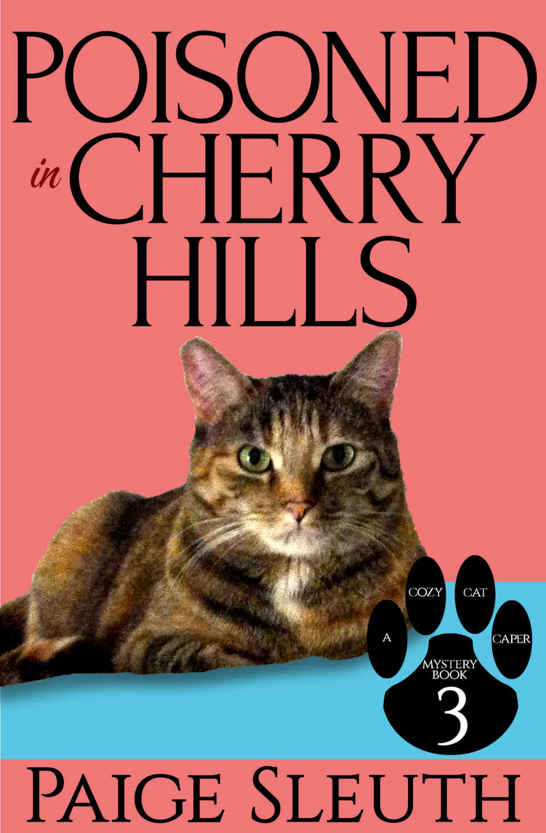 This book or portions of it (excluding brief quotations) may not be reproduced without prior written permission from the publisher/author.

This book is a work of fiction. Names, characters, businesses, places, events, and incidents are either products of the author’s imagination or used in a fictitious manner. Any resemblance to actual persons (living or dead), actual businesses, or actual events is purely coincidental.

This ebook is licensed for your personal enjoyment only. If this ebook copy was not purchased by or for you, please purchase your own copy before reading. Thank you for respecting this autho
r’
s work.

NOTE FROM THE AUTHOR

“Those two have trouble written all over them,” Imogene Little said, her mouth pinched as she looked across the adoption room set up as part of the Furry Friends Foster Families benefit dinner.

Katherine Harper’s gaze followed the direction of Imogene’s. Two twenty-something women, a redhead and a blonde, stood arguing in the cat corner. The redhead leaned in the blonde’s face, her cheeks flushed and her arms jerking about. A tabby in the cage behind her had stretched one paw as far as it would go through the bars in order to swat at her swinging ponytail.

“I hope their antics don’t get us booted from the Cherry Hills Hotel after they were nice enough to donate space for tonight’s event,” Imogene said. “Then they’ll never want to deal with 4F again.”

Two chihuahuas circled around the women’s feet, yapping as if to referee the disagreement. The dogs weren’t the only creatures who noticed the tension heating up on the other side of the room. Kat would be surprised if anyone in attendance hadn’t gotten wind of it. Several men in the nearby vicinity had even leaned against the walls as if settling in to watch a choreographed performance put on as part of the night’s entertainment.

“What are they arguing about?” Kat asked, hoping they were in a bidding war over one of the animals present. Between the dozen or so dogs, twenty cats, and one lone rabbit being showcased this evening, the more people who showed an interest in adopting one of the animals, the more of a success tonight’s event would be.

Kat turned toward her. “You know them?”

Imogene nodded. “Lucy Callahan and Heidi Smith have lived here since they were teenagers. Even then they didn’t get along. They both seem to go for the same type, and inevitably somebody’s heart ends up getting broken.”

Kat frowned at the mention of men. Sneaking a peek at the wall clock, she wondered where her own date was. Hopefully Andrew Milhone hadn’t gotten caught up at work. Being a police detective, he often kept erratic hours.

Of course, Kat had to remind herself, calling tonight’s outing a ‘date’ wasn’t entirely accurate. Although she had already elevated it to that level in her mind, she wasn’t sure whether Andrew shared her sentiments. For all she knew, in his mind they were just two childhood friends going out to support the homeless animals of Cherry Hills, Washington. Otherwise, wouldn’t he have called to let her know he’d be running late?

An angry shout redirected Kat’s attention to the problem developing across the room. “Should we intervene?” she asked Imogene.

“Other than asking them to leave, I’m not sure what we can do. We might have to let them battle it out for a while longer. But help me monitor the situation. The last thing we need is a brouhaha ruining tonight for everybody else.”

“I’ll keep an eye on them,” Kat assured her friend.

“Thank you.” Imogene took a step backward. “Well, I suppose I ought to go circulate like a good hostess. I’ll talk to you later.”

As Imogene wandered off, a large Labrador trotted up to Kat and stuck his head up her dress with enough force to send her wobbling in her stiletto heels. Thankfully, she regained her footing in time to keep from flashing the room, using the dog to steady herself.

“Sorry ’bout that,” a tall, thin brunette said, pulling on the leash attached to the dog’s collar while trying to maintain her hold on a sparkly clutch bag. She gave the leash another tug, but the dog gave no indication that he’d felt it. “I didn’t expect Champ to be such a handful.”

“He looked so despondent in his pen I thought I’d just walk him around for a little while to cheer him up. It turns out he’s walking me more than I am him.”

Kat tilted her head. “Are you thinking about adopting him?”

The woman hugged her purse a little tighter. “Oh, I don’t know. It’s such a big commitment, caring for another living creature.”

“It is,” Kat concurred, “but it can also be very rewarding.”

The woman regarded her. “Do you have any pets?”

“Yes, two cats.” Kat couldn’t help but smile as she thought of her beloved tortoiseshells. “They find new ways to amuse me every day.”

As if he was determined to prove that his entertainment value exceeded anything a cat could provide, Champ sat on his haunches and flapped his front paws, reminding Kat of a seal. Both women laughed as they watched him.

“Have you ever had a dog before?” Kat asked.

The woman shook her head, her shoulders sagging a little. “My fiancé never liked animals in the house.”

Kat didn’t say anything. From the way the woman choked on the word ‘fiancé,’ she figured he was no longer in the picture.

“I’m Tasha Taylor, by the way,” the woman said.

“Kat Harper.” Kat reached out to shake Tasha’s hand before remembering she already had her hands full.

“It’s nice to meet you.” Tasha wedged her clutch under one armpit in order to get a better grip on Champ’s leash. “Maybe I will look into adopting him. Now that I’m all by myself, it makes no sense to live in that big, empty house alone.”

Kat’s heart warmed at the thought of another animal finding a permanent home. “I’d be happy to help arrange the paperwork if you do decide to take him. I’m one of the 4F board members.”

A yell drew their attention to the other side of the room. Kat expected to see one of the over-exuberant canines in the center of the commotion, but instead she saw Lucy and Heidi. The redhead had her feet planted in a battle stance, her fists jammed on her hips as she leaned within an inch of the blonde’s face.

“I wonder what that’s about,” Tasha said.

Kat suppressed a groan. “Tasha, would you excuse me?”

Tasha didn’t look at her, her gaze transfixed on the scene across the room. “Sure. It was nice meeting you.”

Kat threaded her way through the room, squeezing by several dogs and more than several dinner attendees. The dogs jumped at her with enthusiasm, overstimulated by all the activity. The humans in attendance didn’t seem to be much better behaved, Kat observed as she watched the redhead shake her finger in front of the blonde’s nose. Kat held her breath, fully expecting the woman to get one of her knuckles bitten off.

Fortunately, Kat arrived before the women could escalate to physical violence. “Hi there,” she greeted, pretending she hadn’t just stepped into the middle of a heated argument. “I’m Kat Harper. I don’t believe we’ve met yet.”

The two women glowered at each other for a moment longer before the blonde broke eye contact. She turned toward Kat, although she didn’t return her smile. “Heidi Smith,” she said.

The other woman—who could only be Lucy Callahan—sneered. “Take my advice, Kat, and avoid Heidi at all costs.”

Kat had hoped her mere presence would turn the conversation to more neutral topics, but that apparently had been wishful thinking on her part. “Is there a problem here?” she asked, rotating her gaze between Lucy and Heidi.

Heidi folded her arms across her chest and jutted her chin in Lucy’s direction. “The only problem is her.”

Lucy scoffed. “Please. You’re the one who insists on following me around everywhere.” She looked pointedly around the room. “Isn’t there somewhere else you can go stand?”

“I’m only over here because this is where the cats are,” Heidi replied.

Heidi nodded. “If I find one that seems like a good fit.”

Lucy snorted. “She means she wants a black cat to go with her broom and witch’s hat. Halloween is only two months away, you know.”

Kat cleared her throat. “Well, we have almost twenty cats currently up for adoption. Perhaps we could discuss your lifestyle and temperament requirements to find you a good match.”

“Her lifestyle consists of poaching on other people’s boyfriends,” Lucy piped up. “In fact, I don’t believe you’ve ever managed to snag a man without stealing him from somebody else, have you, Heidi?”

Heidi ignored her, choosing instead to focus on Kat. “I’d be happy to discuss these animals with you before the night is over. Right now though, I need some fresh air.”

Kat forced her lips up into a smile. “I understand. Come find me when you’re ready.”

“Good riddance,” Lucy called out as Heidi walked away.

Kat watched Heidi retreat, noting the way she kept her shoulders folded inward as if shutting out her surroundings. Kat sensed a sadness about her and found herself torn between going after her to offer some comfort and staying put to keep Lucy from hunting her down and making her life more miserable. She didn’t know which of the women had started tonight’s hostilities or what exactly their man problems were, but, based on the short interaction she’d seen, Lucy seemed to be the instigator.

When Heidi disappeared from view, Kat twisted back around to give Lucy her full attention. The tabby that had been playing with Lucy’s ponytail earlier reached a paw through the bars again, prompting Kat to smile.

“It looks like you have an admirer,” she said.

Lucy visibly perked up, her eyes darting around the room.

“I mean behind you,” Kat clarified, pointing.

Lucy rotated around to peer at the tabby, her features softening a fraction. “That one is pretty cute.”

“All adoption fees are half off tonight,” Kat encouraged.

“Oh, that’s too bad.” Kat silently questioned why Lucy was hovering in the cat corner if that were the case. Had she chosen this spot only to pester Heidi?

“It sucks,” Lucy said. “But I’ve been thinking about moving. Maybe once I’ve found a new place I can come back for him, if he’s still available.”

Kat’s brain kicked into gear. She was determined to do what she could to find homes for the felines. “My building has vacancies, and they allow pets.”

Kat nodded. “I live in Cherry Hills Commons, and I know of at least three empty units at the moment. If you’re serious about moving, you shouldn’t have any problems renting one of them.”

Lucy tapped her chin. Any animosity she’d displayed earlier had completely disappeared now. “I’ll have to look into that. What’s the address?”

Kat gave it to her, then caught the tabby’s eye. She swore the feline winked.

Kat smiled. With any luck, the tabby would soon have a permanent home.

She only hoped Lucy was kinder to animals than she had been to Heidi Smith.

Slayers: Friends and Traitors by C. J. Hill
Lots of Love by Fiona Walker
Magnificent Guns of Seneca 6 by BERNARD SCHAFFER
The Fugitive by John Grisham
The Keeper of Lost Causes by Jussi Adler-Olsen
Murder at Mansfield Park by Lynn Shepherd
Troubles in the Brasses by Charlotte MacLeod
The Gentling by Ginna Gray
A Hint of Frost: Araneae Nation ( Book One) by Edwards, Hailey
Jennifer Lynn Barnes Anthology by Barnes, Jennifer Lynn