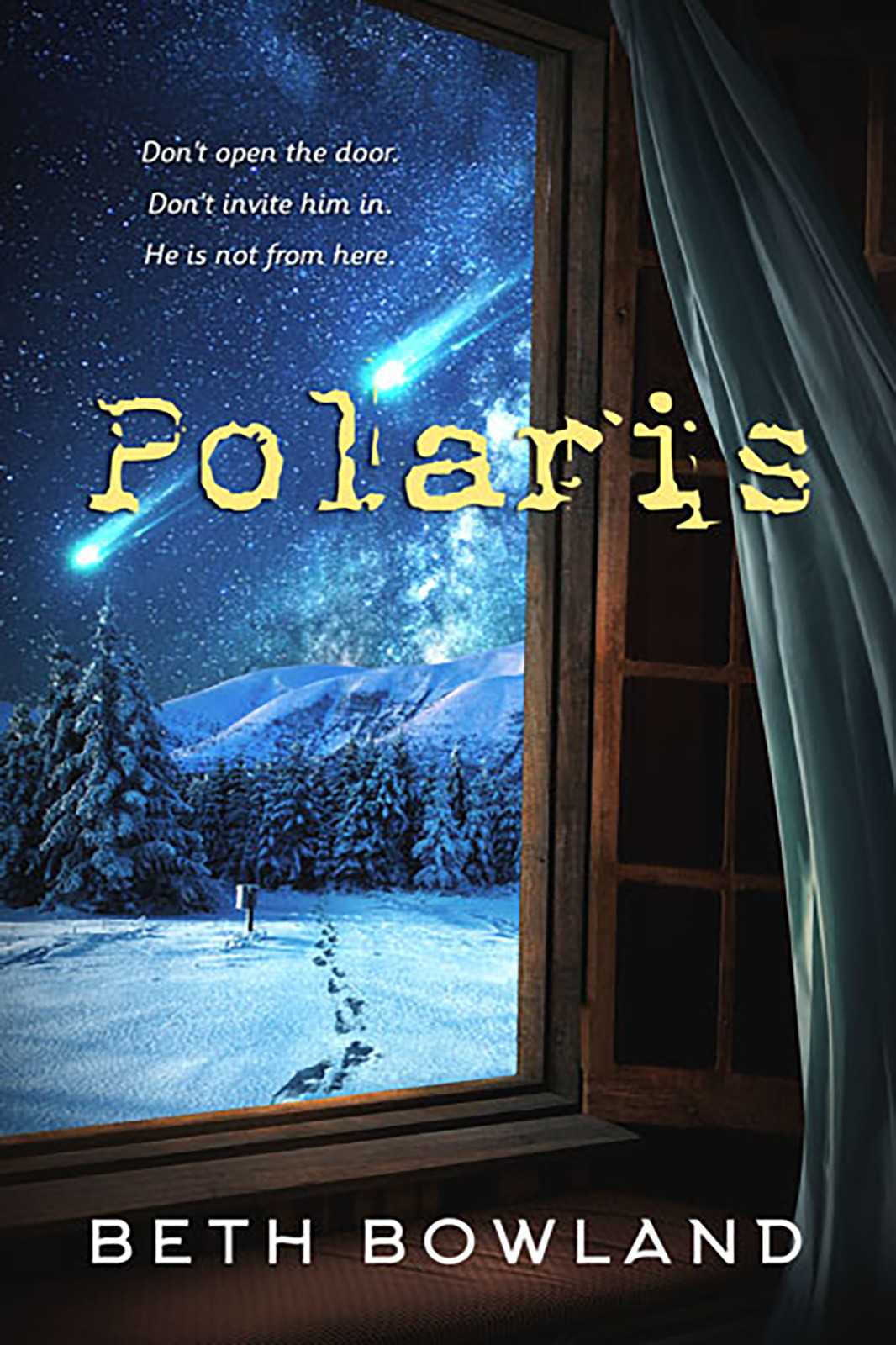 All rights reserved. Published in the United States of America by Month9Books, LLC.

To all the planetariums of the world who fill kids with wonder and awe.

The snow crunched beneath the visitor’s feet with each unsteady step he took into the deep drifts. He shivered as he pulled his shirt closer around his neck to prevent the icy wind from blowing more flurries down his back. He hated the cold, but he pressed on. His pants and shirt were a few sizes too big, as were the old black boots. Not surprising considering he’d removed them from a dumpster he’d passed while in town earlier.

The visitor traveled place to place, his anonymity protected by the aura this time cloaking him under the guise of a teenage boy. For over sixty years, he’d walked this path, doing what they told him, while silently loathing them for not giving him what he desired. He was a visitor on a mission to fulfill his fate. And this time, he’d get it right.

He continued along the road until he spotted a soft glow of light in the distance. The house sat toward the end of the long country road … alone, like the visitor. He approached the house and stopped at the bottom of the stairs. It was an old farmhouse with a large wraparound porch. Two large picture windows framed either side of the front door, covered in heavy velour draperies with just a peek of sheer fabric exposed down the center. The smell of burning wood drifted from the chimney in gray smoky clouds that stood out against the crisp black sky. The roof, pine trees, and bushes, shouldered a thick blanket of snow, unlike the porch that appeared to have had a recent shoveling.

The visitor ascended the stairs, pausing midway to examine his surroundings. After a deep breath, he continued up and rang the doorbell.

The front door flew open, and then a boy rushed past the visitor, wearing blue jeans and an oversized hoodie. On his feet he wore work boots.

“Did you see them?” the boy yelled as he slid across the porch. His boots made a scratchy, squeaky sound against the icy wood flooring. The boy stared at the sky. “They came from that direction.” He pointed. “I saw one of them.”

The visitor stood silently and watched the boy race back and forth across the length of the porch. The boy leaned over the banister seemingly to get a better view of the sky until a clump of snow fell from the roof and plopped onto his face.

“Nuts!” the boy muttered. He wiped his face with the sleeve of his hoodie. Then he stared at the visitor. “Hey, you’re not my friend, Parker. Who are you?” The boy stepped back slowly into the doorway.

The visitor allowed his eyes to scan the boy’s features. He was an average-looking boy with fair skin, sandy-brown hair, and a slender build. “You rushed out and didn’t give me a chance to say anything. My name is Nakal.”

“What are you doing out here? You lost or something?”

The boy shrugged and said, “Well, I’m not allowed to have people I don’t know inside when I’m here by myself,” he said as he reached behind his back for the door handle.

Nakal pulled his shirt up tighter around his neck and shivered. “I understand, but if I could just come in for a few minutes … I’m so cold and I don’t think I can walk any farther.”

“I guess I can’t let you freeze out here,” the boy said. “My name is Aaron. You can come in for a little while and warm up. But you gotta leave before Mom comes back or she’ll freak.”

Nakal nodded and followed the boy inside.

“You can have a seat near the fireplace. That should warm you up pretty fast,” said Aaron.

Nakal sat in the old recliner and took in his new surroundings. The house was cozy and nicely decorated in an old-fashioned way. It displayed the kind of warmth portrayed in the old Rockwell paintings he’d studied. He’d be comfortable there.

Aaron’s living room smelled like the metal workshop area at his middle school. He was not sure exactly what the odor was but he knew who it was coming from. He also knew his mother’s hypersensitive nose would not be pleased.

Aaron looked at Nakal, who reminded him of someone in his seventh grade class. Nakal’s ivory skin seemed to have an olive undertone—almost as if he was malnourished or ill— but he looked to be average height and weight. His dark eyes were expressionless, and there was a teardrop-shaped birthmark on the side of his neck.

Aaron’s attention was quickly diverted when a beeping sound came from the television.

The news station has been flooded with calls from panic-stricken viewers on the extraordinary meteor display this evening. Authorities are investigating and have confirmed that one of the meteors did impact somewhere along Old Country Road 1217. Further investigations will continue at daylight. Stay tuned for weather. A massive blizzard has shifted directions and is headed our way.

“Whoa!” Aaron danced around the room. “I knew it’d hit. I felt the entire house shake.”

Nakal didn’t respond, only continued to stare at the TV.

“You never answered my question.” Aaron sat in the chair across from Nakal. “Did you see it? I mean you had to have. It lit up the entire sky.”

“I think I saw
something
,
but I wasn’t really paying attention,” Nakal said, not removing his gaze from the TV.

Aaron crinkled his forehead, and as he prepared to ask his next question, his mother walked in the front door, causing him to jump.

His mother stopped in the doorway, attempting to balance several bags in her arms while closing the door with her foot. She noticed Nakal and shot her son a questioning gaze.

“Hey, Mom,” said Aaron. “Uh, this is Nakal. He was lost and ended up at our house. I didn’t think you’d mind me letting him in ‘cause it’s so cold outside. Nakal, this is my mother, Mrs. Martin.”

Aaron removed the bags from her arms. Before he could walk away, she grabbed him by the shirt and pulled him close to her.

“What did I tell you about allowing strangers inside the house?” Mrs. Martin’s voice was low and tense. Deep wrinkles crossed her forehead.

Aaron adjusted the bags in his arms and shrugged. “I know,” he whispered. “But he was freezing. What if I didn’t let him in and he froze on our front porch. I thought that would make you madder, so I let him in.”

She crinkled her nose and looked at Aaron.

Aaron immediately shook his head. “It’s not me,” he whispered. “It’s Nakal,” he said quickly before running the bags of groceries into the kitchen and returning, not wanting to miss anything.

Mrs. Martin removed her coat and placed it in the closet. “Nakal, where are your parents?” She sat on the couch.

Nakal pursed his lips together slightly before speaking. “I’m not sure. I just remember riding in the car for a bunch of days. Dad stopped the car so we could stretch our legs.” He paused to rub the side of his face. “Then I went behind a tree to use the bathroom, and that’s when I heard the car pull off. I just started walking, and I ended up here.”

Aaron’s mother sighed and kicked off her shoes. “What? You’re kidding me! They just left you? Have you tried calling them?” She pulled her cellphone from her purse. “I’m going to call the police. How old are you?”

“I’m thirteen. Um … my dad got a new cellphone before we left, and I never memorized the number.”

“You and Aaron are the same age,” she said as she punched the buttons on her cell and placed it against her ear. She shifted the position of her phone and looked at the screen. “No signal. It’s too late to drive back into town and the roads are getting slick. Well … ” she said to Aaron. “I suppose he can stay here tonight. But I’m going to keep trying to get a call to go through. If I can’t get the police to come out here, we’ll go to the police station first thing tomorrow morning to see if they can find his parents.”

“Okay.” Aaron went outside, grabbed the rest of the bags, and carried them into the kitchen.

“Nakal. Do you want something to eat?” Mrs. Martin asked as she followed Aaron.

The Syndicate by Brick
They Found Him Dead by Georgette Heyer
Theodore Boone: The Scandal by John Grisham
Sinful Liaisons by Samantha Holt
E.L. Doctorow by Welcome to Hard Times
Pains and Penalties: (A Geeks and Things Cozy Mystery Novella #1) (Geeks and Things Cozy Mysteries) by Sarah Biglow
Owned: An Alpha Anthology by Anthology
Full Circle by Susan Rogers Cooper
A Strong Hand by Catt Ford
Hawkmoon (The Hawkmoon Chronicles) by Unknown