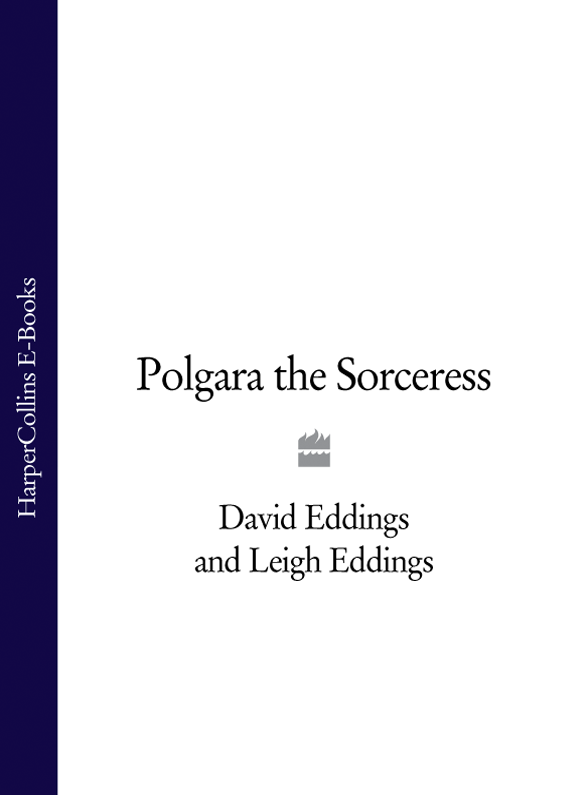 And finally, after fifteen years, this book is dedicated to our readers. It’s been a long journey, hasn’t it? It’s been quite a project for us, and your patience and enthusiasm have helped us more than you can imagine. Thank you for your fortitude, and we hope that what we’ve done pleases you.

KAIL, THE RIVAN WARDER,
objected strenuously when King Belgarion told him that he and his queen planned to make the journey to the northern end of the Vale of Aldur unattended, but Garion uncharacteristically put his foot down. ‘It’s a family gathering, Kail. Ce’Nedra and I don’t need a cluster of servants underfoot. They’d just be in the way.’

‘But it’s dangerous, your Majesty.’

‘I rather doubt that anything’ll turn up that I can’t handle, old friend,’ Garion told him. ‘We’re going alone.’ The Rivan Queen was a bit startled by the firmness in Garion’s voice.

Then there was the argument about fur. Queen Ce’Nedra was Tolnedran by birth and Dryad by heritage. Those backgrounds were both southern, and the notion of wearing animal skins made Ce’Nedra’s flesh creep. Garion, however, was at least partially Alorn, and he’d traveled extensively in the north in the winter-time. ‘You’re going to wear fur, Ce’Nedra,’ he adamantly told his tiny wife, ‘because if you don’t, we aren’t going anywhere until the weather warms up.’ Garion seldom delivered ultimatums to her, and Ce’Nedra was shrewd enough not to argue about the matter any further. She obediently dressed herself in Alorn fur garments, spoke at some length with the nurse who would oversee the royal children during her absence, and then she and her husband left the Isle of the Winds aboard the disreputable Captain Greldik’s dubious ship on the morning tide.

They purchased horses and supplies in Camaar and set out toward the east. The regularly spaced Tolnedran hostels along the highway to Muros provided adequate lodgings each night, but after Muros, they were largely on their own. The Rivan King, however, had spent a great deal of time living out in the open, and his little wife was forced to
concede that he was adequate when the time came to set up camp.

The Rivan Queen was realistic enough to know just how ridiculous she looked while gathering firewood in those camps. The bulky fur garments she wore gave her a roly-poly appearance, her flaming red hair streamed down her back, and because of her size she could only carry a few sticks at a time. The unwanted image of a red-haired beaver trudging through the snow came to her quite often.

The snow was deep in the Sendarian mountains, and it seemed to Ce’Nedra that her feet would never be warm again. She could not give her husband the satisfaction of admitting that, however. This trek was her idea, after all, and she’d have sooner died than admit that it might have been a mistake.

It was snowing lightly and was bitterly cold when they came down out of the mountains and rode south across the snowy plains of Algaria. Although it definitely went against the grain to confess it, even privately, Ce’Nedra was actually glad that her husband had been so insistent about fur clothing.

And then as a chill evening was settling over southern Algaria and when lowering clouds were spitting tiny pellets of snow, they topped a rise and saw the little valley on the northern edge of the Vale of Aldur where Poledra’s cottage and the surrounding outbuildings lay. The cottage had been there for eons, of course, but the barns and sheds were Durnik’s additions, and they gave the place the appearance of a Sendarian farmstead.

Ce’Nedra wasn’t really interested in comparative architecture at that point, however. All she really wanted to do was to get in out of the cold. ‘Do they know that we’re coming?’ she asked her husband, her breath steaming in the biting cold.

‘Yes,’ Garion replied. ‘I told Aunt Pol that we were on the way a couple of days ago.’

‘Sometimes you’re a very useful fellow to have around, your Majesty,’ Ce’Nedra smiled.

‘Your Majesty is
too
kind.’ His reply was a bit flippant.

‘Oh, Garion.’ They both laughed as they pushed on down the hill.

The cottage – they’d always called it that, though in actuality it was growing to be a fairly large house – nestled at the side of an ice-bound little stream, and the snow was piled up to the bottom of the windows. There was a kind of golden invitation about the way the soft lamplight spilled out across the snow, and the column of blue smoke from the central chimney rose straight up toward the threatening sky. The Rivan Queen definitely approved of that indication that warmth and comfort were no more than a quarter mile away.

And then the low door opened, and Durnik stepped out into the dooryard. ‘What kept you?’ he called up to them. ‘We were expecting you along about noon.’

‘We hit some deep snow,’ Garion called back. ‘It was slow going there for a while.’

‘Hurry on down, Garion. Let’s get Ce’Nedra in out of the cold.’ What a
dear
man he was!

Ce’Nedra and her husband rode into the snowy dooryard and swung down from their saddles.

‘Go inside, both of you,’ Durnik instructed. ‘I’ll see to your horses.’

‘I’ll help with that,’ Garion offered. ‘I can unsaddle a horse almost as well as you can, and I need to stretch my legs anyway.’ He took Ce’Nedra by the arm and guided her to the doorway. ‘I’ll be right back, Aunt Pol,’ he called inside. ‘I want to help Durnik with the horses.’

‘As you wish, dear,’ the Lady Polgara replied. Her voice was rich and filled with love. ‘Come in here, Ce’Nedra. Let’s get you warm.’

The Rivan Queen almost ran inside, hurled herself into the arms of Polgara the sorceress, and kissed her soundly.

‘You should feel my feet, Aunt Pol,’ Ce’Nedra replied with a little laugh. ‘How can you
stand
the winters here?’

‘I grew up here, dear, remember? I’m used to the weather.’

Ce’Nedra looked around. ‘Where are the twins?’

They’re down for their afternoon nap. We’ll get them up for supper. Let’s get you out of those furs and over to the fireplace. As soon as you warm up a little, I’ve got water heating, and you can have a nice hot bath.’

Part of the difficulty with Alorn fur garments lies in the fact that they don’t have buttons, so they’re customarily tied on. Undoing frozen knots can be quite a chore, particularly if one’s fingers are stiff with cold. And so it was that Ce’Nedra was almost forced to simply stand in the center of the room with her arms outstretched while Polgara removed her outer garments. Then, once the furs were off, the Rivan Queen went to the fireplace and stretched her hands out to the crackling flames.

‘Not too close, dear,’ Polgara warned. ‘Don’t burn yourself. How does a nice hot cup of tea sound?’

After Ce’Nedra had drunk her tea and soaked in a tub of steaming water for about a half-hour, she actually began to feel warm again. Then she dressed in a plain gown and returned to the kitchen to help feed the twins. Polgara’s children were a year old now, and they’d begun to walk – although not very well. They also seemed to have some difficulty managing their spoons, and quite a bit of their supper ended up on the floor. The twins had flaxen, curly hair, and they were absolutely adorable. Their vocabulary was very limited – at least in any language Ce’Nedra could understand. They talked to each other extensively in some strange tongue, however.

They’re speaking “twin”‘, Polgara explained. ‘It’s not uncommon. Each set of twins develops its own private language. Beldaran and I spoke to each other in “twin” until we were about five. It used to drive poor uncle Beldin wild.’

Ce’Nedra looked around. ‘Where are Garion and Durnik?’

‘Durnik’s made some more improvements,’ Polgara replied. ‘I’d imagine he’s showing them off. He’s added several rooms at the back of the cottage, so at least you and Garion won’t have to sleep in the loft.’ She carefully wiped
the chin of one of the twins. ‘Messy person,’ she chided gently. The child giggled. ‘Now then, what’s this all about, Ce’Nedra? Why did you make this trip in the dead of winter?’

‘Yes. It was characteristically long-winded, I thought.’

‘You won’t get any argument from me about that. How could he
possibly
have written that much down in under a year?’

‘Father has certain advantages, Ce’Nedra. If he’d actually had to
write
it, it’d probably have taken him much, much longer.’

‘Maybe
that’s
why he left so many things out.’

‘I don’t exactly follow you, dear.’ Polgara gently wiped the face of the second twin and then set them both down on the floor.

‘For someone who pretends to be a professional storyteller, he certainly did a third-rate job.’

‘He more or less covered everything that happened, I thought.’

‘There are some awfully large gaps in that story, Aunt Pol.’

‘Father
is
seven thousand years old, Ce’Nedra. In that long a time there were bound to be periods when nothing was happening.’

‘He didn’t go into anything that happened to
you
, though. He didn’t say very much about those years you spent at Vo Wacune or what you did in Gar og Nadrak or any of those other places. I want to know what
you
did.’

‘What on earth for?’

‘I want the
whole
story, Aunt Pol. He left so much out.’

‘You’re as bad as Garion was. He always used to badger my father for more details every time the Old Wolf told him a story.’ Polgara broke off abruptly. ‘Away from the fireplace!’ she said sharply to the twins.

They giggled, but they did as they were told. Ce’Nedra gathered that it was a game of sorts. ‘Anyway,’ she picked up the thread of her thought, ‘Belgarath sent some letters when he had those last few chapters delivered to Riva. The
letter he sent to me is what gave me the idea of coming here to talk with you. First he accused us all of getting together and bullying him into writing the history. He said that he knew there were gaps in the story, but he suggested that
you
could fill them in.’

‘How typical,’ Polgara murmured. ‘My father’s an expert at starting things and then tricking others into finishing them for him. Well, this time he’s out of luck. Forget it, Ce’Nedra. I don’t pretend to be a storyteller, and I’ve got better things to do with my time.’

Vicious Circle by Wilbur Smith
The Bones Will Speak by Carrie Stuart Parks
Faye's Spirit by Saskia Walker
Seeking Asylum by Mallory Kane
Infamous by Ace Atkins
Survival Paranoia (Survival series) by Glass, Kay
Sorceress Hunting (A Gargoyle and Sorceress Tale Book 3) by Lisa Blackwood
Across the Miles (The Not So Bad Boys of Rock #1) by Rhonda James
The Domino Killer by Neil White
A Lady's Point of View by Diamond, Jacqueline