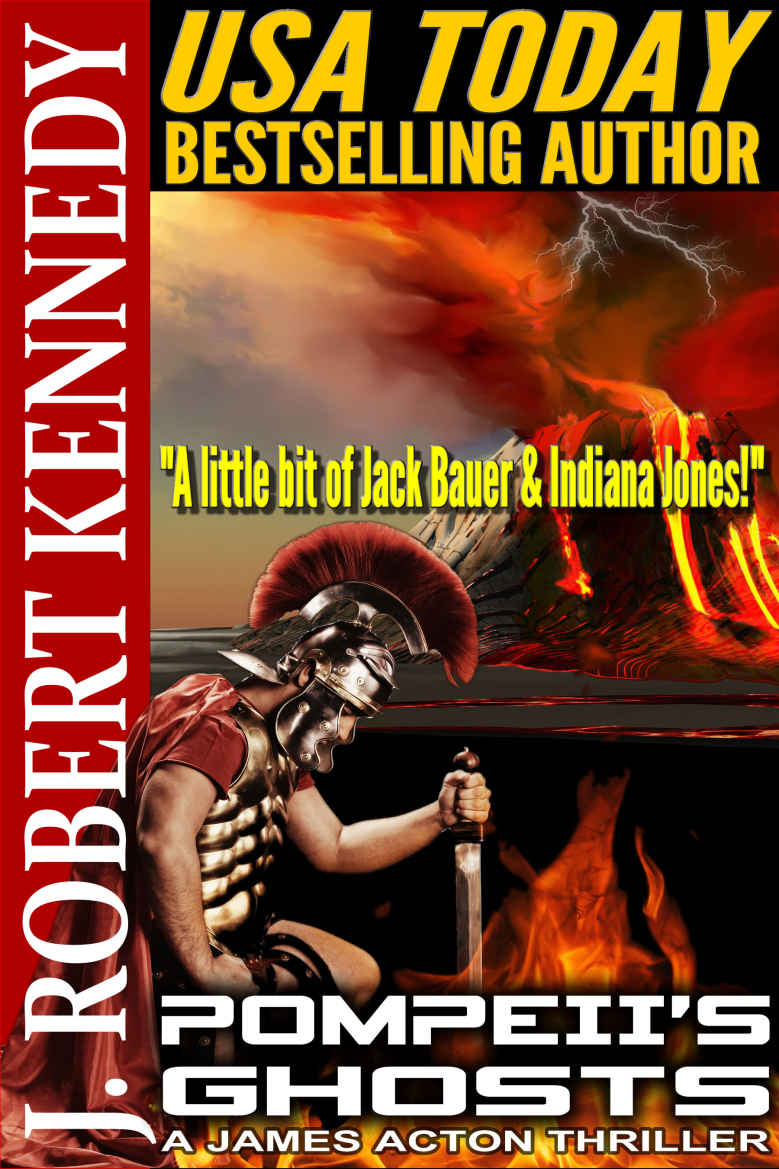 POMPEII IS ABOUT TO CLAIM ITS FINAL VICTIMS—TWO THOUSAND YEARS LATER!

Two thousand years ago Roman Emperor Vespasian tries to preserve an empire by hiding a massive treasure
in the quiet town of Pompeii should someone challenge his throne. Unbeknownst to him nature is about to unleash its wrath upon
the Empire during which the best and worst of Rome’s citizens will be revealed during a time when duty and honor were more
than words, they were ideals worth dying for.

Professor James Acton has just arrived in Egypt to visit his fiancée Professor Laura Palmer at her dig site when a
United Nations helicopter arrives carrying representatives with an urgent demand that they come to Eritrea to authenticate
an odd find that threatens to start a war—an ancient Roman vessel with over one billion dollars of gold in its hold.

It is a massive amount of wealth found in the world’s poorest region, and everyone wants it. Nobody can be trusted,
not even closest friends or even family. Greed, lust and heroism are the orders of the day as the citizens of Pompeii
try to survive nature’s fury, and James Acton tries to survive man’s greed while risking his own life to protect those around him.

USA Today bestselling author J. Robert Kennedy delivers the historical drama and modern day
action in Pompeii's Ghosts his fans have come to expect. Pompeii’s Ghosts
opens with a shocker that will keep you on the edge of your seat until the thrilling conclusion in a story torn from today’s headlines.

About the James Acton Thrillers

Though this book is part of the James Acton Thrillers series, it is written as a standalone novel and can be enjoyed without having read any
of the previous installments.

USA Today bestselling author J. Robert Kennedy has been ranked by Amazon as the #1 Bestselling Action Adventure
novelist based upon combined sales. He is the author of over twenty international bestsellers including the smash hit James Acton Thrillers series of which the first
installment,
The Protocol
, has been on the bestseller lists since its release, including occupying the number one spot for three months.
He lives with his wife and daughter and writes full-time.

"If you want fast and furious, if you can cope with a high body count,
most of all if you like to be hugely entertained, then you can't do much better than J Robert Kennedy."

Get a free eBook!

Get a free eBook by joining
The Insider's Club
and be notified when new books are released!

Find out more at
www.jrobertkennedy.com
.

Get a Free eBook!

Also by the Author

For the 276 who were kidnapped, and the over two million young
girls estimated to have been taken against their will and forced into the global sex trade.

“You could hear the shrieks of women, the wailing of infants, and the shouting of men;
some were calling their parents, others their children or their wives, trying to recognize them by
their voices. People bewailed their own fate or that of their relatives, and there were some who prayed
for death in their terror of dying. Many besought the aid of the gods, but still more imagined there were
no gods left, and that the universe was plunged into eternal darkness for evermore.”

“Above all, we should acknowledge that the collapse of the Soviet Union was the greatest
geopolitical catastrophe of the century. As for the Russian nation, it became a genuine drama. Tens of
millions of our co-citizens and co-patriots found themselves outside Russian territory. Moreover, the
epidemic of disintegration infected Russia itself.”

To Roman historians, the name “Pliny the Elder” is well known. A
prolific writer with an impressive résumé, much has been learned about life and
public administration in Ancient Rome thanks to him. His nephew, known as “Pliny
the Younger”, is equally well known amongst volcanologists due to his detailed
and horrific descriptions of the eruption of Mount Vesuvius, and the
destruction it wrought upon Pompeii and other surrounding towns. His
description was so memorable, he has been honored by history—forevermore shall
the most violent of eruptions, such as that of Mount Vesuvius, be known as
Plinian.

His
descriptions have been used throughout this novel to lend realism to the horror
that befell twenty thousand people, too many of their ghosts still haunting the
nearly perfectly preserved streets of Pompeii to this day.

Though
his letters to a friend years later are heavily relied upon, there is one
glaring inaccuracy in his accounts that must be challenged.

If Pliny
the Elder was overcome by the gasses from the volcano, why weren’t the others
with him as well? And if at least some of the others were able to breathe, what
could possibly have been so urgent that they would abandon him, rather than
take the few minutes to carry him to the waiting boats?

It is a
two thousand year old mystery that is about to be resolved.

“What in the name of the gods is that?”

The
ground shook with a rumble as if a beast contained under the marble floor was
struggling to escape, its groan vibrating through the house as those lounging
on the many cushions and silks jumped to their feet—some more spryly than
others—and furtively glanced about, wondering what to do, fear evident in their
eyes.

And immediately
identifying them as foreign to the area.

For
those who had lived near the Bay of Naples for some time, like Lucius Valerius
Corvus, knew exactly what it was—just another tremor, the shaking of the ground
a too often occurrence, though more frequent as of late. Instinctively he had placed
himself in an archway with a hand gripping the stone for balance at the first
hint, and now, as the ground beneath their feet settled, Valerius looked to his
Lord and Prefect, Gaius Plinius Secundus, to make certain he was okay, then to
their honored guest.

The man
who had asked the question.

Several
of the Praetorian Guard burst into the room, the centurion leading them rushing
to his Emperor’s side, bowing—and looking more rattled than his charge. “Are
you unharmed, Imperator?”

Emperor Titus
waved the man off, having quickly recovered from the scare, he himself never
thought of as a coward, having led many successful military campaigns, not the
least of which was the defeat of the Jewish Rebellion. A man to show fear he
was not, and in this case, all Valerius saw on his Emperor’s face was
curiosity.

And true
to form, he ignored his guard and looked at Plinius. “Does this happen often?”

Plinius nodded
as he motioned for everyone to sit back down. All waited for their Emperor to
do so first. Emperor Titus dropped onto the large cushions with the difficulty
age and a life in the military inevitably brought. Taking a long drink from his
goblet, draining it of the sweet wine it contained, he held up his cup and a
servant rushed from out of sight, filling it almost instantly.

Plinius sat,
as did the rest of the guests. “Too often, I’m afraid, sire. I fear another
earthquake as happened seventeen years ago. We continue to rebuild from it to
this day. To have another one I fear would break the will of those who
remained.”

“And
that mountain that continues to smoke?”

Plinius batted
the words away as he swallowed a fat grape. “It has done nothing in my lifetime
but threaten. It is like Helvidius. He rattled his saber but was harmless.”

Laughter
filled the room at the expense of the avowed enemy and critic of Emperor Vespasian,
Titus’ father who had died less than two months ago. The Emperor nodded, a
smile on his face for but a moment, his visage suddenly becoming serious. He
flicked his hand in the air in a dismissive manner. “Leave us. I wish to speak
alone with my dear Plinius.”

The room
quickly emptied, no one daring say a word, and Valerius, after making certain all
had left, turned to leave himself when his Emperor’s voice stopped him.

“I would
have you stay, as you are Plinius’ trusted man, and are fully aware of what I
want to speak to your master about.”

Valerius
bowed deeply but said nothing, instead sitting on the cushion pointed to by his
Emperor, halfway between his Prefect and his Caesar. As he made himself
comfortable, Emperor Titus’ voice lowered.

“I have
concerns, Plinius.”

“These
quakes. The safety of what is kept across the bay.”

Plinius
nodded, his face revealing little emotion, though Valerius knew he was about to
dismiss the Emperor’s fears but dared not trivialize them. “I understand your
concern, sire, and I can assure you I share them. This is why everything has
been stored underground, so should the walls collapse, nothing would be
revealed. If another quake such as that which struck us over a decade ago
should occur, the rubble would merely act to secure your concern even more
until your own people would be able to salvage it.” Plinius leaned forward
slightly. “And I pledge my life to defend it.”

Throw Away Teen by Shannon Kennedy
Eternal Hope (The Hope Series) by Rose, Frankie
The Game of Boys and Monsters by Rachel M. Wilson
Out of the Cold by Norah McClintock
The Supermodel's Best Friend (A Romantic Comedy) by Gretchen Galway
The Lord Of Misrule by House, Gregory
The Texan's Surprise Baby by Gina Wilkins
A Ghost at the Door by Michael Dobbs
18 - Monster Blood II by R.L. Stine - (ebook by Undead)
Consider Her Ways by John Wyndham