Pray for a Brave Heart 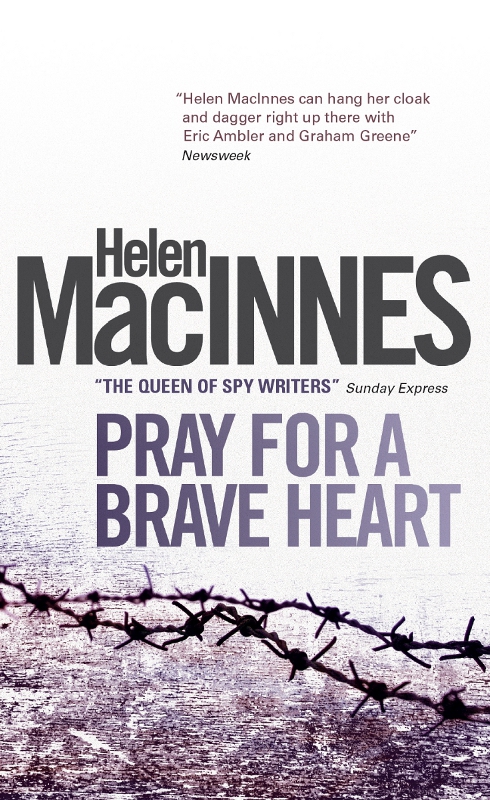 PRAY FOR A BRAVE HEART

AND AVAILABLE FROM TITAN BOOKS

Pray for a Brave Heart

Printed and bound in Great Britain by CPI Group Ltd.

What did you think of this book?

We love to hear from our readers. Please email us at:
[email protected]
, or write to us at the above address.

To receive advance information, news, competitions, and exclusive offers online, please sign up for the Titan newsletter on our website.

Pray for a brave heart, which does not fear death, which places a long life last among the gifts of nature, which has the power to endure any trials, rejects anger, discards desire…

If we have common sense, Chance, you are not divine: it is we who make you a goddess, yes, and place you in heaven.

On the narrow bed lay two uniforms, an army great-coat, a stack of khaki shirts and socks. The table, holding a neat small pile of civilian clothes, was jammed against one wall to give more space for an open trunk and a clutter of books on the floor. Letters and pencils and odd sheets of paper, stamps, bits and pieces of old erasers, pens broken and pens usable, had been emptied from the desk drawer on top of the blotter. The travelling clock, pushing its face through a tangle of ties and handkerchiefs, gave quiet warning that the evening was slipping away. But William Denning, sleeves rolled up, a smudge of dust streaking his brow, stood at the window and watched the street lights go on, bringing his last night in Berlin.

He was a quiet-faced man, with watchful grey eyes, even features, and brown hair trimmed close. His height was average, his body thin; but his shoulders were good and his tight army shirt (with captain’s insignia on its collar) stretched across firm
muscles. He looked like a capable man, self-disciplined, serious, older than his thirty-three years. At this moment, by himself, his face was relaxed. His eyes were amused. The usual firm line of his mouth had eased into a smile.

The hurrying people down in the street had hurried along there yesterday, would hurry tomorrow. They always seemed the same, as anonymous as the row of buildings opposite him. Buildings? Someone called them apartments, even called them home. “All right, all right,” he told the street, “I’m a stranger here, a stranger who lived four years with you. Go on, give me one kind word, one first and last kind word.” But the street was too busy. At least, he thought, it would be easy to say goodbye. He had been neither happy nor unhappy in this room: he had no deep memories of this place. Was this the best he could hope for, now?

He drew the curtains, switched on the reading lamp by his armchair, and poured himself some beer. Then he sat down, studying the art magazines. What about this lot on sculpture and architecture? Good illustrations, they’d probably come in useful, back numbers were always difficult to get; better pack them for New York. Now what about these others? Leave them, he decided, and tossed them lightly on to a growing pyramid of books and magazines in front of his chair.

Next, he reached for the books piled on the small table at his elbow. Those three were surplus weight: he threw them on to the pyramid. But these—no doubt about these, they’d go back home to America along with the magazines. He finished his beer, and began carrying his selection towards the trunk. He frowned down at the layer of shoes and books, already tightly packed. It was then that the door bell rang, briefly, gently.

Denning’s frown deepened and he glanced impatiently at his watch. But he dropped his load into the trunk, and opened the door. Outside, the landing was in darkness. What had happened to the lights? he wondered, and then stared at the figure which took a quick step from the darkness towards the open door. As Denning’s shoulders straightened, the stranger smiled, made a gesture of caution, and flicked his thumb against the drooping brim of his hat so that it snapped back to show his deep-set eyes and prominent brow. Just as quickly, he glanced back over the well of the staircase, seemed satisfied with the silent hallway beneath him, and slipped into the room.

Denning closed and locked the door. “Max! What are you doing in Berlin?”

“Just foot-loose as usual,” Max Meyer said, pulling off his black coat and then looking round for a free chair. “Charming bit of chaos you’ve got here, Bill. Taking an inventory?”

“So I see. Now, don’t start clearing a space for me—you’d better keep your system intact. Here’s a free spot, anyway.” He dropped his hat and coat on the floor. “Good to see you, Bill.”

“Two years, almost, since I was last here,” Meyer said, wandering across the room. “June, 1951, to be precise. What happens to time these days?” He picked up Denning’s empty glass and sniffed it. “Any more where this came from? I’ve a thirst I wouldn’t sell for twenty dollars.”

“The price used to be ten,” Bill Denning said, with a grin. He went to the cupboard and brought out all the remaining bottles of beer.

“Cost of living is rising.” Meyer sat down in the armchair with a sigh of relief and studied his flimsy shoes. “Can you imagine it, Bill?—Some people actually choose this kind of clothes, of their own free will.” He gestured with distaste to his sharp-shouldered, waist-nipped jacket, its grey colour too silvered, its pin-stripe black and emphatic. His blue shirt had horizontal stripes of white, cuffs too long, a deeply peaked collar stiffly angled around the tight knot of his black artificial satin tie. His chin was blue-shadowed. His dark hair needed cutting, but he kept it plastered back with plenty of brilliantine. Only the hawk-like, inquiring nose and fine brown eyes, now watching Denning with amusement, were recognisably Max Meyer. “Go on,” he said encouragingly.

“I didn’t say anything.”

“You didn’t have to.” Meyer took the offered glass of beer and propped his feet wearily on a pile of magazines. “Now stop jeering, and sympathise.”

“You look like a man who’d have a stolen car to help him get around.” Denning was studying Meyer’s clothes with interest.

“I have, actually. But tonight was definitely pedestrian. To you, Bill!” Meyer drank thankfully. “And continue packing. I like seeing other people work.”

“That’s part of your new character?” Denning brought over some more bottles of beer and stacked them near the armchair. “Interesting company you must be keeping these days, Major.”

“A half-colonel, my boy, and don’t you forget it.”

“A half-intelligent colonel? Congratulations. But be careful. Or you’ll end up as one of those damn-fool colonels we used to curse.” He enlarged a space on the floor with his foot—that was easier than clearing a chair piled with clean shirts—and sat
down with his back against a wall.

Meyer studied his friend.
“You
look fine, anyhow. And you stayed with Restitution of Property up to the last?”

“We recovered most of the Nazi loot. There are still a few outstanding items, though, I guess we’ll have to file them under
Failures.”

“Will we?” There was a sudden gleam in Meyer’s eyes. Then he began examining the white embroidered arrows on his black artificial silk socks, and was very silent.

“Recently, I’ve been doing some interrogation of displaced persons,” Denning went on. “I thought we might get some leads from them, but—” He watched Meyer, who seemed scarcely to be listening. I remember that look, Denning thought: Max is getting ready to tell me something important, in his own way, in his own time.

“I got more interested in people than in property,” Denning admitted. “What we need now is a new department—the Restitution of Lives.”

“And you’ve started restituting your own?” Meyer waved his hand vaguely towards the trunk.

“What’s wrong with that?”

“Nothing. Not a bad idea, not bad at all. And yet, you know, I’ve often wondered why you did stick with the old Restitution of Property when it became practically moribund.”

“Or you don’t like seeing crooks getting away with their crookery?”

Denning looked up in surprise. There had been an edge to Meyer’s usually soft, almost lazy voice.

Meyer said, his tone normal again, “I’ve always thought it was a pity you didn’t come into counter-intelligence with me a couple of years ago. We’d have made a damned good team. As we always did.”

Denning lit a cigarette. His cool grey eyes watched his friend with some amusement over the flame of his lighter.

“All right, all right,” Meyer said, sharing the amusement. “So you’re going to Switzerland for your terminal leave?” He pointed to the table which held civilian clothes. “Right?”

But Meyer kept right on. “What’s your first stop in Switzerland?”

“Are you serious? Basel? Why on earth Basel?”

“Yes, of course. Hans Holbein. Renaissance art was your field, wasn’t it?”

Denning said nothing at all. He was enjoying himself, watching Max and his manoeuvres. Max ought to have been a diplomat, he thought: that was certainly Max’s field, handling light remarks and delicate tangents with equal skill while he steadily pursued his own purpose.

Max Meyer cleared his throat. “Why don’t you go on packing while we talk? You’ve made me feel guilty, using up your last hours in Germany. You didn’t have a party all arranged for tonight, by any chance?”

Denning shook his head. “Don’t worry, I’m practically ready.” Then, suddenly, he found himself looking at Peggy’s photograph on the bureau. For a moment, he was no longer
in his room. He was four years back. In Princeton, working for a Fine Arts degree on the GI Bill. Living in the cramped little apartment that seemed a pretty fine place to him. And Peggy—Peggy getting ready for a special party while he waited, all dressed, nervous about the evening ahead at the Dean’s house, glancing at his watch, fifteen minutes to go and they were supposed to be sitting down to dinner. And Peggy coming out of the bedroom, her face powdered, her hair arranged, but without a stitch of clothing on. Peggy saying earnestly, “Now, Bill, darling, don’t look so worried. I’m practically ready!” “I’m practically ready,” he repeated to Meyer; and he looked away from the photograph. Yes, he thought, I can now remember Peggy: once, I couldn’t even trust myself to do that. He became aware that Max was watching him. “What is it, Max?” he asked defensively. “What is it you want me to do?”