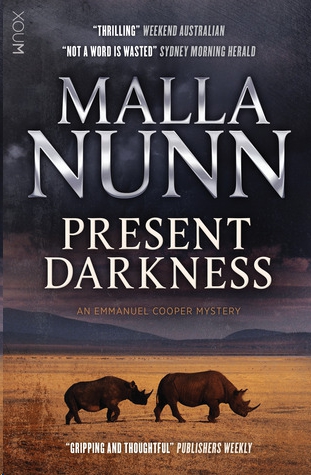 “Nunn teases out a complex tale of sexual depravity and family members prepared to protect even the worst of secrets in beautifully layered prose, but what makes
A Beautiful Place to Die
a debut to savor is the interplay between the cusp of social change and how then-socially accepted
values seem monstrous to the modern reader.”
—The Baltimore Sun

“Consistently engaging, with revelations right up until the very end.”
—Booklist

“With Malla Nunn’s debut,
A Beautiful Place to Die
, you can add apartheid-era South Africa to your global mystery passport.”
—Entertainment Weekly

“This skillfully constructed and involving debut—intended as the first in the Detective Emmanuel Cooper series—reveals the terrible toll of apartheid and belongs in all mystery collections.”
—Library Journal

“Nunn deftly moves between the sordid and the honorable; Cooper operates in a world of pornography, race-baiting, religious fanaticism and torture, yet there’s nobility in his attempt to understand what governs race relations in South Africa and to solve the murder of a repulsive but powerful member of the community. To do that, he must bridge divisions that whites in particular have a vigorous interest in maintaining. Nunn’s dexterous debut works well on many levels.”
—Kirkus Reviews

“Crime writers understand how place exposes character, but the best, like Nunn, explore the idea that place is also fate. Nunn sets her characters brilliantly within a complex psychological portrayal of a particular place and time.”
—Graeme Blundell, The Australian

“Nunn excels at the swift evocation of people and place … Not a word is wasted … Breath-catching … Unforgettable and a talent to watch.”
—The Sydney Morning Herald (Critics’ Choice Best Books of 2008)

“A terrific debut! Page-turning, clever and multi-layered in its portrayal
of the people and landscape of Apartheid South Africa. I loved it.”
—Minette Walters

“Nunn deftly balances suspense and deduction as she offers a revealing glimpse
into South African society under the segregation laws promulgated by the ruling National Party.”
—Publishers Weekly, starred review

“Casual and institutional racism form a fascinating backdrop for the action,
giving readers a feel for how apartheid actually looked and felt to those
on both sides of the color line.”
—Kirkus Reviews

“The plotting is complex and suspenseful and every scene conveys the sinister feel
of South Africa’s apartheid culture.”
—Mostly Fiction Book Reviews

“This is an outstanding series and gives a nuanced look at the various
avenues racial prejudice can travel down.”
—MTMB’s Mystery Book Blog

“A compellingly exciting read
…
This is a novel with a big conscience.”
—Petrona Book Reviews

“Compelling … a worthy tale, a great detective story and a side of
the apartheid as it began.”
—Hit the Road Jacq blog review

“A gritty detective novel that will entrance.”
—Booksie’s Blog

“Nunn has a brilliant ability to deliver a picture of a society at war with itself … You’ll find the pages turning themselves.”
—Thebookbag.co.uk

“Historical hindsight may make readers a bit more self-congratulatory about
recognizing the evils of apartheid, but it won’t help them see around the curves Nunn has plotted or rise above her insight into the enduring dilemmas of her
separate-and-unequal world.”
—Kirkus Reviews

“A disturbing book with a morally compelling hero.”
—Booklist

“An engrossing and compelling read … saturated with the feel of 1950s South
Africa.”
—Mike Nicol, author of the Revenge trilogy

“Nunn writes beautifully, with evocative, almost cinematic, descriptions of the
landscape and of Cooper’s tumultuous past.”
—Shelfawareness.com (starred review)

“The suspense is irresistible, and the mystery sustains itself well. This is a
wonderfully effective addition to Nunn’s already masterful series of novels.
—Historical Novel Society

All rights reserved. Without limiting the rights under copyright below, no part of this publication shall be reproduced, stored in or introduced into a retrieval system, or transmitted in any form or by any means (electronic, mechanical, photocopying, recording or otherwise), without the prior permission of both the copyright holder and the publisher.

For you, the reader

Friday night. A dirt lane on the outskirts of Yeoville, where cars came out of the city then disappeared in the direction of the four-way intersection that led to the suburbs. The girl paced out the number of steps between the mouth of the alley and the vacant lot at the far end. Some men liked to lay her down in an open field. Most preferred to position her against the wall of the dark lane itself. After the urgency left them, they got into their cars and drove back to the flat sprawl of Johannesburg suburbs; nice places, with names like Sandton, Bedfordview and Edenvale. The girl liked to feel the money in her hands for a moment before she took it to the darkest part of the alley, pulled out the loose brick she knew was there, and shoved the bills behind it.

Between men, she stood halfway down the alley—in the shadows, but easy to see if one knew where to look. Squeezed between high brick walls and strewn with crushed kaffir weeds, the lane was ideal for clients with ten minutes to spare between knocking off work and heading home.

The sweep of car headlights lit the walls of the lane at intermittent intervals. The moonlight was faint and partially blocked by the roofline of the adjacent building. She didn’t mind the gloom. It softened the hard line of her jaw and smoothed the acne scars on her right cheek. She liked the darkness. In the dark she was perfect.

The sound of feet crunching the dirt broke the quiet and the girl looked up. Car lights swept past, briefly illuminating the dirt strip. A white man stood at the end of the alley, just emerged from the vacant lot. He was tall, big across the shoulders, and still. He wasn’t so much standing in the alley as blocking it.

A chill travelled up the girl’s legs and into her belly.

“Sorry, hey. Bad timing.” Fear sharpened her performance and she sounded every inch a slum-born English prostitute working for coins. “I’m just finished for the night.”

He moved towards her: big and getting bigger. Sure-footed. In no hurry. The girl backed away, worn heels scraping the dirt. Cars passed on the main road.

“Okay, wait.” She glanced over her shoulder and calculated twenty steps to the safety of traffic and people, maybe twenty-two. “Wait. Let’s talk. We can work something out. What is it you want?”

On another night and with another client she might have joked, “All right. But it will cost you.”

Not this time. She turned and sprinted for the alley exit. Images of a roadside trench and the cold weight of the earth covering her naked body one shovel-load at a time flashed through her mind. Every drop of street cunning accumulated over the hard years told her that the big man would take her blood and her bones. But he would pay nothing for what he took.

Seventeen, sixteen, steps more to the main road. In truth, she lost count. It didn’t matter. The traffic was louder, the headlights brighter. She risked a look over her shoulder. The man sauntered the dirt lane with his hands thrust deep into his pockets. He couldn’t catch her at that pace. She was almost safe. Home now, quickly. Turn the handle, slip inside and lock the door.

She turned back and slammed hard into a wiry body. The impact knocked her off balance and breath rushed from her lungs. Her shoulder smacked the ground and dirt filled her mouth. She looked up, dazed. A second man crouched down and cupped a hand over her mouth. His palms smelled of raw sugar; such a sweet scent amid the stench of urine and kaffir weed in the laneway. Then realisation came quickly. There were two men in the alley and together, they’d netted her like a bird.