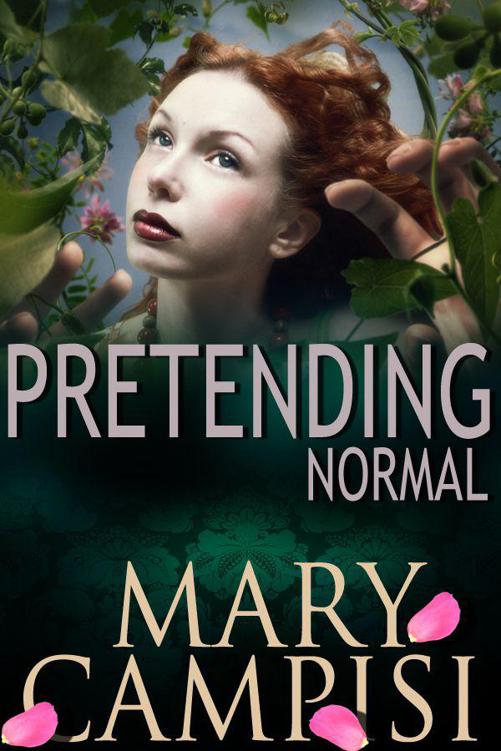 Pretending Normal
, formerly
Lies Imitating Life
, was a past quarter finalist in Ray Bradbury’s New Century New Writer Award contest. It was also a past semi-finalist in the Amazon Breakthrough Novel Award contest.

1976 Before
-Sara Polokovich wants out of Norwood, Pennsylvania, population 4,582, where the undertaker and the butcher are the same person. All she has to do is earn a scholarship. Just two more years… but until then, she pours over classics to strengthen her comprehension skills, reviews for the SAT, and continues to request college brochures from every school in the northeast.

Sara’s just buried her mother, her father drinks too much, and her kid sister won’t leave her alone. Why can’t her life be normal?
Even half-normal? Why does Frank, (she refuses to think of him as her father anymore), spend all of his time in the garage with that damn ‘57 Chevy? And why does he have to hide bottles all over the house; in the red metal cupboard in the garage, behind the faded orange curtain in the kitchen, under the sink in the bathroom?
Why can’t anybody talk about what’s happening?

As Sara struggles to free herself from a life of dysfunction and disease, she will learn the true depths of a parent’s love and the ultimate sacrifice given— and taken— in the name of that love.
Pretending Normal
follows Sara Polokovich’s coming of age as she discovers the truths about family with all of its flaws and weaknesses as the bond that holds one to another, in love, loyalty, even death.

Other Books by Mary Campisi:

To those who survived life with an alcoholic parent.

Almost two months have passed since I left and came to live here. I only went back to the old house once, to pack up some clothes and a few books. Aunt Irene said not to worry about bringing a lot of things with me. We’d buy what I needed, kind of like taking on a new identity. I know she wants to give me a fresh start, but I can’t erase fifteen years with a new bedspread and a different address.

My
old life is somewhere deep inside. A closet full of new clothes and a different zip code won’t make it go away. Some days I have to look in the mirror, touch my face, speak in my voice, to see that at least I’m in the same body; at least I haven’t disappeared altogether.

We buried my mother fifty-seven days ago in St. Augustine’s Cemetery. There’s no tombstone yet, but Father Torrence said she’ll have one before winter. I don’t care because I’m not going back. Why would I? To talk to a rectangle of grass covering a box stuffed with decaying body parts?

She’s not there anyway.
Helen Lenore Polokovich is in our backyard breathing life through her roses—the prizes she loved as much as Kay and me.
That’s
where I go to talk to her because I can see her, and I can hear her.
I can.

It was supposed to be a simple surgery, routine, she called it.
Many women my age have hysterectomies
, she said. Why wouldn’t we believe her? After all, she was a nurse. But she didn’t say anything about a
myocardial infarction.
I burned the word in my brain the second Dr. Borchard said it.

I’m sitting on my bed with a
Sears and Roebuck
catalog, planning my escape from this great metropolis of Norwood, Pennsylvania, population 4,582. Two more years. If I break it into very small chunks, I might get through it.

I
f I move to Hawaii, I won’t need a winter coat. Or snow boots. I will need a swimsuit though, lots of them. Bikinis. I flip through the
Sears and Roebuck
swimsuit section, find one in navy and white trim, another in hot pink, a third in black. In three months, when the new catalog comes out, its thin pages smooth and unwrinkled, I can pick all over again.

If I move to Hawaii, the only thing I’ll ever have to shovel is sand, white stuff, lots of it, sifting between my toes, sticking to my Coppertone calves.
I can sit on the beach and drink from a coconut, watch the sun fall into the ocean every night. That’s what the brochure says, doesn’t it? I yank open the top drawer of the nightstand, grab the pamphlet Aunt Irene gave me last spring and flip to page five. ‘Enjoy the beautiful stillness of a Hawaiian night, sipping exotic refreshments from a coconut as you watch the glorious ball of sun drift into the ocean.’ Close enough.

But I’ll be happy in Florida, too, in a big, white house with orange trees in the backyard.
Every morning I’ll pluck the oranges from their limbs and squeeze sweet juice into my glass. I might even think about Georgia—peaches and the Atlanta Braves. Maybe even North Carolina.

I push the brochures aside, scoot down on my pillow and heave a long sigh.
Hawaii. Florida. Georgia. North Carolina. Who am I kidding? I’ll settle for any place where the butcher and the undertaker aren’t the same person. Any place but Norwood. If you don’t get out, you get stuck working at the Beechmont Paper Mill or the A&P. Or, if you are lucky enough to escape to college and stupid enough to come back, you’ll get hired by Norwood General Hospital as a nurse, respiratory therapist, or lab technician.

Not me, though.
Two more years and I’m gone. Then I can order a Big Mac every night if I want to, or a Whopper—with fries, and a chocolate shake. Maybe I’ll pick a college based on the number of McDonalds and Burger Kings in the area, since Norwood has none. I laugh out loud. Mom would have had a fit.
He
would just call me a goddamn imbecile.

Who cares?
He’s
the goddamn imbecile, he’s the one who thinks he’s such a hot shot because he’s head foreman at the mill. He’s been there for thirty-three years; he should be
president
of the place by now. So what if he’s in charge of one hundred and three employees? So what if he knows how to operate every piece of machinery, knows all the supplier’s products, has his name on the door of a pathetic cubicle he calls an office? So what
?

Nina
Tegretti has been my best friend since second grade, when her father, Leo, moved his family from Buffalo to Norwood. Nina lives two streets over with her parents and two brothers in a dark green house that used to be a grocery store. She has an older sister named Maria who dropped out of Allenwood Community College and moved to Philadelphia five months ago after a huge blow-up with her father over curfew. Nina lets me read the letters Maria sends on flowery stationery that smells like baby powder.

It’s Saturday afternoon and Nina’s supposed to be confessing her sins to Father Torrence, like she does every third Saturday of the month.
But, today she’s skipping because as she says, ‘How many times can you say you lost your temper with your little brother?’

We’ve just come out of Benny’s Hot Dog Deluxe, where we’ve stuffed ourselves with Benny Deluxes, a basket of onion rings
, and cherry phosphates.

“Well, at least now I’ve got something real to confess,” Nina says as we work our way toward the alley that leads from Main Street to St. Augustine’s
Church.

“I guess you do.”
She means because she lied to her mother about going to confession. I haven’t been to confession since the pig roast when
he
made me lie for him. I’ve got a friend, Charlotte Lorenshine, who thinks spilling your guts to an adult, especially a priest, is just plain freaky. Of course, I don’t tell her about the Catholic teenage code and how we all just recycle the same sins. There’s the basic trinity;
I disobeyed, I argued
,
I lost.
Then all you do is insert and expand.
I disobeyed my mother and/or father/grandmother/grandfather, other person of authority. I argued with my mother and/or father/sister/brother. I lost my temper with my father/mother/sister/brother.

The only person I know who confesses to ‘impure’ thoughts is Conchetta Louise Andolotti, but what do you expect from someone who wears a rosary around her neck and has five statues of the Virgin Mary in her front yard?
Now that’s freaky. I only know about the impure thoughts because I saw the Confirmation letter she wrote herself. We were in ninth grade catechism and Sister Alice Joan made us write five ways we intended to improve our lives as we prepared to enter the adult Catholic community. It took me ten seconds, after all, how tough is it to add onto ‘I disobeyed, I argued, I lost’?

I really was going to try
to change my ways, even though I was ticked when Sister Alice Joan told us we didn’t get to pick new confirmation names. The one time in my life when I could be somebody different, and I had to get stuck reaffirming my own name. Sara Elizabeth, how boring is that?

And I say that’s the reason I didn’t make it two days past Confirmation before I was back
to disobeying, arguing, and losing. If only that witch nun had let ‘Raquel’ Polokovich stand in for Elizabeth, things would be different.

But look where I am now.

And there he is,
an eyeshot ahead of us, stumbling from The State Liquor Store, clutching a brown bag. I would know the broad shoulders and crew cut anywhere. “Let’s get out of here before he sees me.” We turn and run down the alley next to Benny’s.

“Is he okay?” Nina
pants after me.

“He’s fine,” I shout back.
That’s all we say until we come out on the next street, near St. Augustine’s Church. We suck in gulps of air and start home.

Nina doesn’t look at me when she asks,
“Was he drunk?”

“No.
He gets like that when he has to work a double.” Lie.

I am such a liar. I don’t even have to think about them anymore, they just fall right out of my mouth. Smooth. Easy. Last week, when our neighbor to the right, Mrs. Peterson, wanted to know why Frank was ‘making such a racket’ at eleven o’clock at night, I told her he lost his watch, the one Mom had given him on their first anniversary and he was tearing the garage apart trying to find it. What was I going to tell her,
the truth?
That he was really ripping the garage apart looking for a bottle? And when our neighbor to the left, Mr. Jedinski, spotted him staggering around the backyard a few nights ago? I told him it was because of a bad reaction to some medicine.

It could all still be okay, nobody will have to know. All he has to do is stay inside when he gets plastered.
Is it really that difficult?

Nina and I make small talk the rest of the way home
. Do I think pink and green go together? Am I going to hang out tonight? What time? Do I think that new guy from Pittsburgh, Peter Donnelly, is cute? Yes, maybe and definitely, especially the part about the new guy. We are on even ground again, relaxing, and I am feeling almost normal.

Tweaked by Katherine Holubitsky
Shared Too by Lily Harlem
Wicked Fix by Sarah Graves
Lethal Rage by Brent Pilkey
Something Has to Give by Maren Smith
Hot in the Saddle (Heroes in the Saddle Book 1) by Randi Alexander
And The Devil Will Drag You Under (1979) by Jack L. Chalker
Bedlam: The Further Secret Adventures of Charlotte Brontë by Laura Joh Rowland
Carry On by Rainbow Rowell
When They Come by Jason Sanchez