Read Prince for a Princess Online

Prince for a Princess 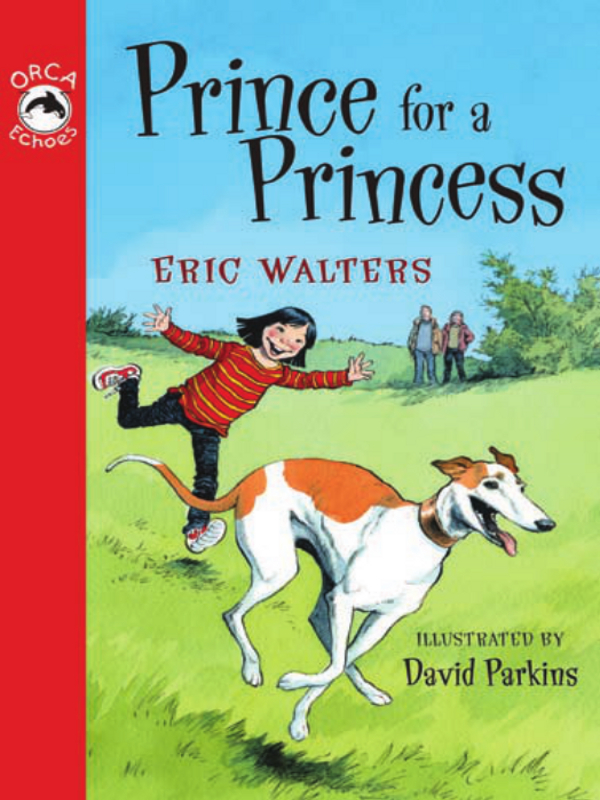 All rights reserved. No part of this publication may be reproduced or transmitted in
any form or by any means, electronic or mechanical, including photocopying,
recording or by any information storage and retrieval system now known or to be
invented, without permission in writing from the publisher.

Summary
: Christina and her family adopt Prince, a retired greyhound, but when he
escapes one day, they decide to adopt another dog to keep Prince company. 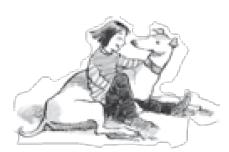 Christina walked hand in hand between her parents.
They swung her back and forth as they walked up
the gravel road. Christina was seven and a little old
to be swung. But she was small for her age, and it was
something they all loved to do.

They stopped in front of a barn. It had been a long drive out to the country. Christina was excited to be on a farm.

“Now, Christina,” her mother said, “before we go in, I want you to remember we're only here to
look
.”

“I know. Only to look,” Christina said, but she hoped for much more.

“We both know how much you want a dog,” her mother said.

“I don't think a horse would work in the city,” her father said.

“A little sister would be almost as good as a dog.”

“Let's look at the dogs,” her father said.

They walked into the barn. It was big and smelled fresh and clean. It was quiet inside except for some soft music. If this is a kennel, why isn't there any barking? thought Christina.

“Hello!” her father called out.

There was no answer. A little man appeared. He was wearing rubber boots and faded jeans. He waved and smiled as he came forward.

“Hi, I'm Bert. I'm glad you could make it. But I'm hoping you'll do more than just visit them. Maybe I could put you all to work? Come on!”

Before they could answer, Burt turned around. They followed him through a second door. The big room was filled with cages. There were dozens and
dozens
of cages on either side of a wide aisle. A set of eyes stared back at Christina from every cage.

“Your timing is perfect. It's time to turn the dogs out,” he said.

“Turn them out?” Christina's mother asked.

“To let them play in the exercise yard,” he said. “Children aren't the only ones that need to play!”

Bert opened up a cage, and a big dog popped his head out. 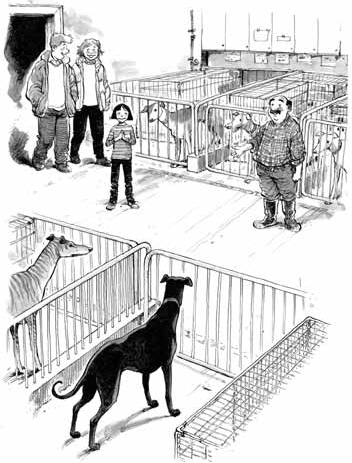 He clipped a leash onto its collar, and the dog trotted out. Bert greeted the dog like a close friend, dropping to one knee and petting him on the head. “How you doing, boy?” The dog pressed up against Bert.

Bert handed the leash to Christina. The dog was almost as tall as she was.

Christina's father took a step closer. “He certainly is big.”

“Bigger than most, smaller than some,” Bert said. “Don't be afraid.”

Bert chuckled. “I was talking to your parents. Now, bring him out to the yard,” he said, pointing at an open door. “You can take the leash off once you're outside.”

Christina and the dog trotted away.

“She wasn't afraid at all,” Bert said. “And neither of you should be either. Greyhounds are the gentlest dogs in the world.”

He opened a second cage and put a leash on another dog. He handed the leash to Christina's mother. She hesitated but took the leash and led the dog away. The family took turns leading the dogs out to the yard until all of them were outside.

There were thirty-six dogs in the yard.

“There are so many of them,” Christina's mother said.

“Are they all former racing dogs?” Christina's father asked.

“All of them,” Bert said. “They only race for a few years, and then they have to retire.”

“It's hard to believe they retire before most humans even start school,” Christina's father joked.

“For racing dogs, it's all about winning. Older dogs are just that little bit slower. When they retire, we have to find new homes for them.”

It was amazing to see all the dogs together. There was no barking or snarling or fighting. The dogs ran and pranced and played with Christina. Some of them ran big circles together, as if they were racing.

“It's wonderful to watch them run,” her mother said.

Bert nodded. “It is. It's like watching a painting in motion.”

“Why aren't they barking?” her mother asked.

“Greyhounds are pretty quiet. They'll occasionally bark or growl like all dogs do, but mostly they just
rooo
.”

“It's the sound a greyhound makes when it's happy. You'll hear it soon enough,” Bert said.

“They're all so beautiful. How does anybody ever choose one?” her father asked as Christina approached.

Bert smiled. “Well, you don't have to choose just
one
.”

“You mean we could have two or three?” Christina asked.

“Three is a bit much, but people often end up with two. The dogs aren't used to being alone,” Bert said. 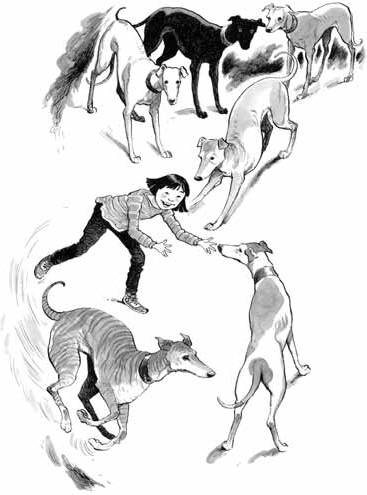 Her father put his hands in his pockets. “I don't think our house is big enough to hold two greyhounds.”