Read Princess on the Brink Online

Princess on the Brink 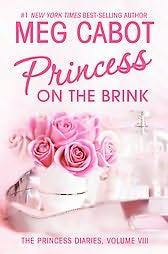 MEG CABOT
Princess
ON THE BRINK

For Abby, with love and thanks

“I suppose”—to Sara—“that you feel now that you are a princess again.” “I tried not to be anything else,” she answered in a low voice. “Even when I was coldest and hungriest. I tried
not
to be.”

OTHER BOOKS BY MEG CABOT

A Screenplay by Mia Thermopolis

INT/DAY—The Palm Court at the Plaza Hotel in New York City. A flat-chested girl with upside-down-yield-sign-shaped hair (fourteen-year-old MIA THERMOPOLIS) is sitting at an ornately set table across from a bald man (her father, PRINCE PHILLIPE). We can tell by MIA’s expression that her father is telling her something upsetting.

Oh, she has GOT to be kidding. Describe a room?
That
is our first assignment? DESCRIBE A ROOM? Does she have any idea how long I’ve been describing rooms creatively? I mean, I’ve described rooms in SPACE—for instance, in my
Battlestar Galactica
fan fic about Starbuck and Apollo finally Doing It.

You know what I can’t believe? I can’t believe she stuck me in Intro to Creative Writing. I should be in Intermediate at least. I mean, with my practice PSAT scores—which, okay, were about as low as they could be in math, but were GREAT in verbal—I should have tested into it.

And okay, the SATs don’t measure creativity (unless we’re supposed to believe that those people grading the essay part really read them).

But my verbal score alone should prove that I’m capable of describing a ROOM. Doesn’t she know I’ve moved on from describing rooms—and even from writing novels—to writing whole screenplays?

Because Lilly is totally right, there’s no other way I’m ever going to get a true representation of the story of my life onto the silver screen unless I write it myself. And Lilly directs it. I know it’s going to be tricky finding financing and all, but J.P. said he’d help. And he knows TONS of people in Hollywood. Just the other day he and his parents had dinner with Steven Spielberg’s cousin.

Why can’t Ms. Martinez see that by putting me in Intro to Creative Writing instead of Intermediate, where I belong, she is repressing my artistic growth? How is the blossom
of my creativity ever going to be able to bloom if no one WATERS it?

Describe a room. Okay, here’s a room for you, Ms. Martinez:

The four stone walls press narrowly against one another, glistening with moisture dripping from the low ceiling. The only light that filters in comes from the single tiny barred window near the ceiling. The only furnishings are a narrow cot with a thin mattress made of striped ticking, and a bucket. The purpose for the bucket is made obvious by the stench emanating from it. Is that what is attracting the rats that lurk in the shadowed corners, their pink noses quivering?

Mia, when I said describe a room, I meant describe a room you know well. While I’m certain dungeons like the one you’re describing do exist in your palace in Genovia, I highly doubt you’ve spent much time there. Furthermore, I happen to know from my membership in Amnesty International that Genovia is not on the watch list for inhuman treatment of prisoners, which leads to my next question: When is the last time the dungeons in your palace were even used? And I believe a man as forward thinking as your father would have installed a proper sewage system in the palace by now, making thee need for buckets for human waste obsolete.

Do you really think so, Tina? About my hair? Mom and I took Rocky to Astor Place Hairstylists yesterday for his first haircut, since it was the only place open, seeing as how it was Labor Day. He wouldn’t stop screaming bloody murder about it, so I volunteered to let them trim mine first, to show him it didn’t hurt. I have to admit, I was kind of startled when they got the clippers out!

I think it’s great. You look just like Audrey Hepburn in
Roman Holiday
! What did Michael say when he saw it????

I haven’t seen him since I got back from Genovia. We’re meeting at Number One Noodle Son tonight though. I can’t WAIT!!! He says he has something VERY IMPORTANT he needs to tell me, that he can’t tell me over the phone or IM.

What do you think it is???? And Number One Noodle Son? That’s a little out of his neighborhood, isn’t it? Isn’t he moved into the dorm yet?

No, not yet. Something about his housing. I think that’s
what he wants to tell me. Maybe he’s getting his own apartment or something.

OH MY GOD!!! Can you imagine if he had his own place???? No roommates to burst in on you. And his own kitchen!!! He could make you romantic dinners!!!!!

I don’t KNOW if that’s what it is. He was very vague about it on the phone.

He
better
be getting his own place. What does he think, you’re going to make out at his parents’ place, in front of Lilly…not to mention his MOM????

Ha. Although Michael’s mom probably wouldn’t even notice, she spends so much time up at Michael’s dad’s apartment.

Are the Drs. Moscovitz getting back together???

I hope so! Michael says they’ve started “dating.” Each other!

Well, that’s better than if they were dating other people, I guess. Still, they might as well just get back together, in that case. Save money on rent. God, I’m glad my parents just ignore each other, like a normal couple.

Totally. Speaking of hair, what do you think of Lilly’s highlights?

She says J.P. prefers blondes. I don’t know. I never thought LILLY would be someone who’d change how she looks for a GUY. J.P. must be a total sexual dynamo.

Well, he DID go to her place in Albany that weekend.

Yes, she does. But that’s okay. I AM a goody-two-shoes. I don’t even want to SEE It. Let alone Touch It. Could you imagine having one? I’d die. Do you think Lilly’s touched J.P.’s?

Because of that book my aunt gave me—you know,
Your Precious Gift
.

Oh, right. That one about how your virginity is a precious gift you should only give to the person you marry, because you can only give it once, and you don’t want to give it to someone who won’t value it.

Yeah. Only the book doesn’t say anything about what you’re supposed to do if after you marry the person you find out that he’s gay, something you might have known before you went to all the expense of a wedding if you hadn’t waited. But whatever. Boris saw thee book on my shelf and was worried I might be upset that Lilly had touched it before I did. Even though he’s still, you know. A virgin. It was just touching.

Did she touch it OVER or UNDER the pants?

I’m sorry, Tina. I know Boris is your boyfriend. But I am totally going to throw up now.

I know. Let’s face it, Mia. You and I are going to be the Last Virgins at Albert Einstein High.

Wow. That sounds like the title of a book.

You should totally write it!!!!
THE LAST VIRGINS
.

—Two girls cursed with Israeli-trained bodyguards, paid by their fathers to protect their daughters’ precious gifts…with their
lives
!

Oops, Sperry’s looking this way. I guess we should pay attention. Do you have any idea what she’s talking about?

Who cares? This is way more interesting.

I already told you! I think they full-on Did It!

You’re the one who’s known her since first grade or whatever. Only you would know the answer to that. But she IS blond now.

Hey! I’m blond! And I still have my Precious Gift!