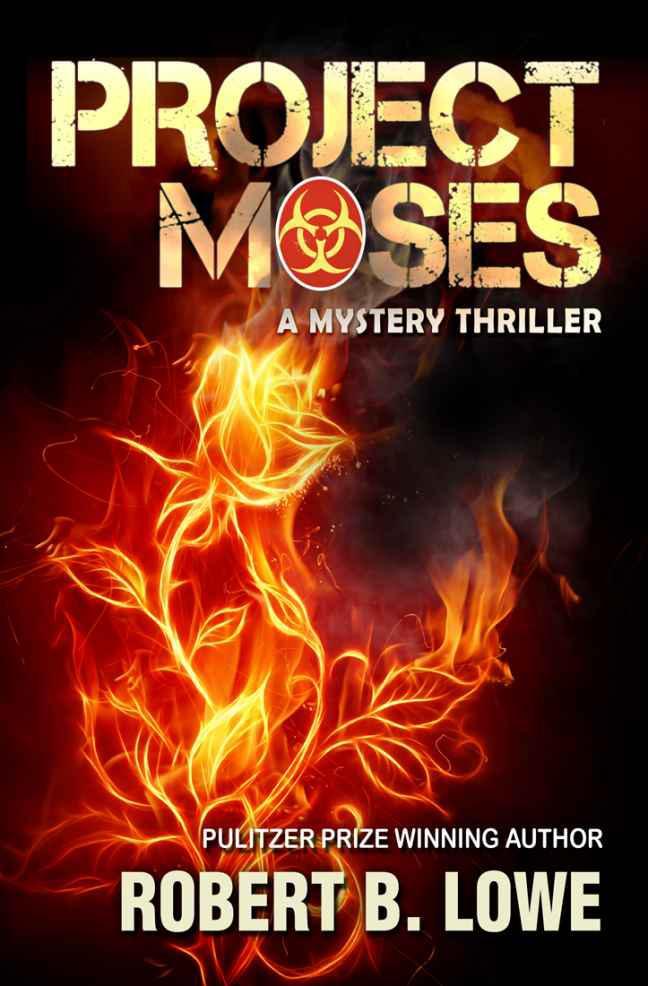 All rights reserved. Except as permitted under the U.S. Copyright Act of 1976, no part of this publication may be reproduced, distributed or transmitted in any form by any means, or stored in a database or retrieval system, without the prior written permission of the copyright owner.

The characters and events in this book are fictitious. Any similarity to real people, living or dead, is coincidental and not intended by the author.

Dedicated to Candace
With thanks for her encouragement and support

“And the LORD said unto Moses, Yet will I bring one plague more upon Pharaoh, and upon Egypt; afterwards he will let you go hence…”

TALL AND SLENDER with well-coiffed silver hair that touched her shoulders, Judge Miriam Gilbert was a handsome woman with sparkling blue eyes who still attracted admiring looks from men, even if the looks were somewhat less carnal than in the past.

At the age of 52, after a decade as a San Francisco Municipal Court Judge, Miriam Gilbert had long ago developed the most important quality required for a jurist charged with resolving the petty crimes and minor civil disputes that filled her courtroom – infinite patience.

But, she was struggling today to remain stoic behind the particle board and formica bench at the front of the courtroom. She watched the middle-aged juror twist her fat hands until the knuckles were red and swollen. The woman shifted uncomfortably in her seat as she scanned the people sitting around her in the jury box.

The juror was about Judge Gilbert’s age but the resemblance ended there. She wore a blue, vaguely nautical dress at least two sizes and 15 years too young for her. Her face was loose and malleable, shifting back and forth between fear and disdain as she looked at her fellow jurors.

Raising her hand like a child in class, the woman fought her sobs as she spoke through lips painted blood red.

“I am not crazy!” she said. She took two deep breaths. “They kept yelling and yelling at me. And I am
not
going to change my mind.”

“He is innocent!
That
one did not prove his case.” Her face trembling, the juror jabbed a lethal-looking fingernail at the prosecutor just beyond the jury box.

Orson Adams stared back at his accuser, removed his tortoise shell-rimmed glasses and frowned.

The muscles around Judge Gilbert’s left eye twitched slightly. She didn’t mind so much that the hung jury was going to waste four days of trial time devoted to a minor case. That was par for the course. What bothered her was a headache that had started about the time the bailiff knocked on the door to Judge Gilbert’s chambers and said: “They want to come out. I think they’ve run out of names to call each other.”

The judge cleared her throat, a signal that the histrionics and squabbling that had emanated from the jury box for the past ten minutes were over. She stared at the empty notepad in front of her for a few seconds before looking up.

“It is apparent to me that this jury will not reach a unanimous verdict,” she said. “They have deliberated for two days - as much time as it took for the state and the defense to present their cases. Therefore, I declare a mistrial.”

“The prosecution will inform the Court within one week whether the state intends to retry this case. I thank the jury for its efforts. I know it has taken much of your time to be here and that the last two days have not been easy.” Judge Gilbert made it a point to nod in the jury’s direction.

Then, she looked over at the defendant, an almost emaciated young man with dirty blond hair tied in a ponytail. He sat beside his attorney, a corpulent man wearing dark-blue pinstripes, pink tie and a forced smile that looked more like a snarl.

“Mr. Warrington will remain free on bond,” she said.

An hour later, the lawyers, jurors and courthouse staff had joined the evening traffic jam. With her black robe now hanging in the closet of her chambers, Judge Gilbert wore a long-sleeved white blouse and a pleated beige skirt as she settled behind her large desk stained yellow to bring out the wood grain through the heavily polished sheen. Behind her were volumes of California cases, bound in blue leather. A cup of Misty Mint tea sat on her right, hot and steaming. Next to it lay two capsules of Darvon painkiller. The headache was worse. It now seemed to fan outward from the center of her brain to her scalp.

Judge Gilbert looked over the assorted papers laying on her desk. She picked up a large envelope that she had opened in the morning. It was teal blue and embossed with a logo in darker blue along the left side that she had never seen before. It was a rising spiral with flowers and bunches of grapes hanging from it.

Judge Gilbert reached into the envelope and pulled out a yellow rose that had been pressed flat. She held it to her nose, inhaled and was rewarded with the aroma of cinnamon. She was reminded of hot apple cider and sweet potato pie.

She set the rose on the desk and grabbed her letter opener, a gift from a former law clerk. She inserted it under the flap of another envelope and tore it open with a satisfying rip. She skimmed the letter inside. Then, Judge Gilbert turned to the next envelope sitting in the tray on the corner of her desk.

The next morning the body of Judge Miriam Gilbert was still at her desk when her law clerk went into her chambers. Her head lay on the desktop, eyes staring at a blank wall. Her silver hair was stained brown where it lay in a puddle of cold tea.

ORSON ADAMS WAS more than a little miffed when he was assigned the Warrington case. After three years of prosecuting crime, he had enough seniority to avoid the dog shit cases. Here was a burglary with nothing actually taken, just forced entry with intent to steal. The fact that the case had ended in a hung jury that afternoon was the capper. What a colossal waste of his time.

Adams hadn’t handled a case in Municipal Court for a year. Being back there the past four days made him wonder if he was spinning his wheels as a prosecutor. He had progressed rapidly through the District Attorney’s office. Being one of a handful of black prosecutors in the office didn’t hurt. Still, maybe it was time to get out on his own. Spread his wings and go private. He could defend the scumbags he had been putting behind bars, pocket the big fees and buy a house in Tiburon.

Adams rounded the elevated indoor track at the Run N Racquet Club for the 33
rd
time. He was in excellent shape at 30 and, with his tailored suits, Adams cut a dashing figure in the DA’s office. He frowned again at the memory of the matronly juror who had blown the whole goddamn trial and blamed him…HIM for failing to prove the case.

“Bleeding heart hag,” he muttered to himself.

He should have guessed that the middle-aged juror might take a maternal, boys-will-be-boys attitude toward Warrington. The ages were right. During jury selection, Adams hadn’t even tried to inquire into whether the juror had any children. Adams had found that older women usually make great jurors for the prosecution. He wasn’t accustomed to worrying about them being on the jury unless they wore peace medallions or were former Berkeley radicals.

Adams finished his 44th and final lap and slowed to walk two more, just to warm down and keep the lactic acid from pooling in his legs. He stopped for a moment at the railing overlooking the racquetball courts.

Down below on Court One, surrounded by glass on two sides, a pair of attractive blonds wearing headbands and Spandex tights and tops in purples and pinks were grunting enthusiastically as they pounded a blue ball around the court.

The smaller woman was named Diana. She had a gorgeous body, buxom yet athletic. She was a fixture at the club and invariably attracted a crowd of male spectators as she and her playing partners sweated through their skintight outfits.

Adams made his way downstairs to the men’s locker room. He showered and stuffed his running clothes back into a Nike gym bag. He put his tie in his coat pocket and flung the jacket over his shoulder.

Adams walked in the breeze across the four lanes of Folsom Street. It was balmier than usual and the wind carried the faintest smell of the ocean. The scent made him hungry and his mind shifted to restaurants. Last night they had eaten Thai. Maybe Diana would like the new South of Market restaurant, the one that specialized in seafood cooked on a gigantic rotisserie imported from Naples or somewhere. How did they cook fish on that thing, anyway? Wire baskets?

When he heard the engine gunning behind him, Adams barely had time to turn his head before the black pickup slammed into him.

ENZO LEE STARED at the blank computer screen in front of him, focusing on the blinking cursor, a dash of amber that seemed to be whispering at him, “Come on…Come on…Come on…Come on…” He had been watching it for 20 minutes, through two tall cups of oily cafe au cafeteria, waiting for the words to flow into his fingertips, or at least materialize somewhere in his cerebral cortex where he could dredge them out. Nothing. A total blank.

He had lost it at some point in the past two days. It had been there when he covered the story about the unfortunate casket mix up involving the mayor’s deceased mother and a dead Saint Bernard: (
“San Franciscans long convinced that the city is run by a son of a bitch got further confirmation yesterday…”)
The words had been flowing for the article about the boxer who fought back from insect-borne Lyme disease: (
“Welterweight Marvin Grossman took a tickin’ but kept on lickin’…”
) And, Lee knew damn well he still had the touch when he wrote the piece about the mysterious sheep mutilations: (
“Picture Lambchop costarring in the Texas Chainsaw Massacre and you have some idea what’s been happening in Solano County…”
)