Read P.S. I Loathe You Online

P.S. I Loathe You 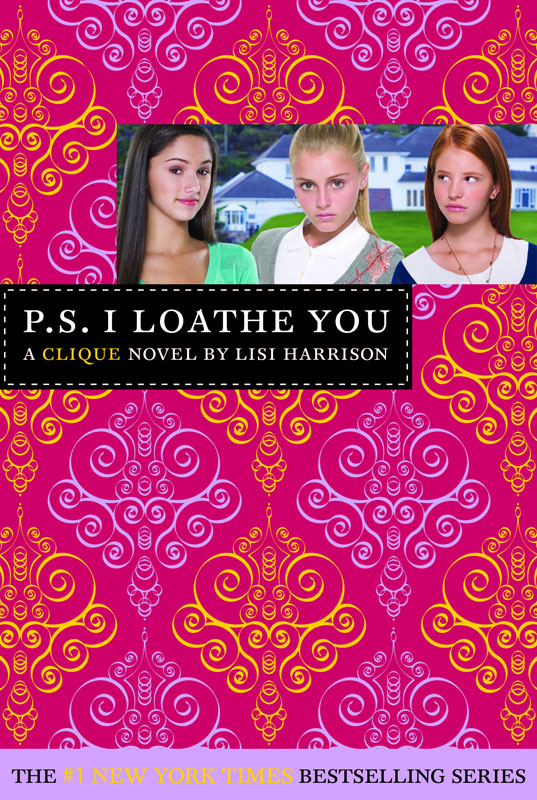 For more of your favorite series, go to
www.pickapoppy.com

Poppy is an imprint of Little, Brown Books for Young Readers.

CLIQUE® is a registered trademark of Alloy Media, LLC.

If you like THE CLIQUE, you may also enjoy:

The
Poseur
series by Rachel Maude

The
Secrets of My Hollywood Life
series by Jen Calonita

A plaguelike swarm of pigeons, the same milky color as the overcast sky, circled above the Pretty Committee. Their flapping wings sounded like the crisp snap of a magician’s cape. Their phlegmmy cooing reached a frenzied pitch. And they unleashed their watery white poo on the fuel-efficient cars below them with remarkable precision.

In movies, opening scenes like these often suggest something eerie is approaching. That a menacing force is gathering strength. That a curse is looming. That the natural order is being disrupted . . .

“Ehma—
Ewww
.” She stopped walking to wave a drifting feather away from her face.

Alicia, Dylan, and Kristen stopped too.

“This is so Briarwood’s fault.” Massie pinch-tightened her gold silk scarf, wiping her leather leggings clean of any bird essence.

“How’s this pigeon infestation
Briarwood’s
fault? What did
they
do?” Alicia adjusted her unsightly pink New York Yankees cap.

“Relax.” Massie cupped Alicia’s shoulder with more force than a shoulder-cupping called for. “I’m nawt saying it’s
Josh’s
fault. The only thing I blame him for is that hat.”

“Massie’s right.” Kristen twirled her shark-tooth necklace. “The kitchen scraps have more than doubled since the boys moved in.” She gestured to the wall of wide metal Dumpsters that lined the far side of the faculty parking lot. “It’s a dirty-bird buffet.”

Massie sighed, no longer in the mood for seventh-grade jokes. She had waited all weekend to make fun of the ex-crushes in their trailer classrooms and wanted to get there before Claire did. It was bad enough Claire had turned down carpool to double on Cam’s bike. For her to scoop the “Ex-Crushes Banished to Tiffany Box Trailers” story would be unbearable.

“Form-a-
tion
!” Massie thundered. An asphalt-pecking klatch of pigeons flapped their wings in panic and flew en masse to the far side of the lot.

The girls quickly lined up on either side of their alpha, awaiting further instruction from her purple Marc Jacobs Mouse flats. As soon as she lifted the left one off the pavement, they synchronized, then launched. Within seconds the Pretty Committee picked up speed, charging the parking lot like the Radio City Rockettes in a cutthroat game of Red Rover.

Destination: the two distant trailers behind the maple trees where the terrified birds had just landed.

The same trailers Principal Burns had tried to pawn off as “overflow facilities” when the Briarwood boys had crashed OCD. The same ones the Pretty Committee had been sent to—
with
the LBRs—thanks to a devious plan hatched by ex-Derrington and the other soccer boys. The
saaaame
ones Massie had made over into glam, supersize Tiffany boxes and eventually unloaded back onto the exes. Sure the trailers cleaned up well, but just like an LBR after a department-store makeover, one good scrub and they were back to their ghastly old selves again.

“I can’t wait to see how funny the wannabe-Beckham boys look in robin’s egg–blue classrooms with glitter-cotton walls, mirrored desks, and vanilla-scented room spray.” Massie grinned, the light breeze heightening the sensitivity of her Whitestripped teeth.

“They’ll still be Beckhams,” Kristen deadpanned. “Just Victorias instead of Davids.” She cackled.

“Point!” Alicia smacked the side-view mirror of a white Infiniti as they sailed past it.

Massie stopped suddenly. “Ew! Smell that?” She lifted her Chanel No. 19–scented wrist to her nose for relief. But the parmesan cheese/rotten lettuce/cat food stench emanating from the pigeon-infested Dumpsters could not be avoided.

Screeching to a halt, the others lifted their shirts to their noses and inhaled their powder-scented deodorants.

“Gawd.” Massie jammed her winter white Juicy Rock the Bag tote against her ribs, protecting it like a puppy in a hurricane. “If I wanted to go to school with trash I’d be at Abner Doubleday Day.”

“Ahhhh!” she yelped as the plastic top popped off. Latte splashed all over her white Joie henley dress. “Leeeeesh!”

“What did
I
do?” Alicia squealed.

“You body-checked me into Myner’s truck.” Dylan whipped the empty cup through his open window.

“Where was I
supposed
to go?” Alicia stomped her camel-colored Kate Spade flat against the asphalt. “
Someone
insisted we walk in formation.”

“Nothing.” Alicia steadied her swinging hair. “It’s just that walking side by side isn’t the best idea when you’re surrounded by cars covered in pigeon butt—”

“Can everyone puh-
lease
focus on
me
for a minute?” Dylan pulled the soaked brown cotton off her belly. “I look like I’m wearing used toilet paper.”

The girls burst out laughing.

“It’s the opposite of funny!” Dylan’s green eyes began to moisten.

Dylan lifted her sunglasses and peered inside. Kristen’s G-rated, mom-approved outfit was crumpled in a pathetic reject heap. As usual, she’d worn it out of her condo, and then Range Rover–replaced it with something sexier—generally handed down from one of the other girls. Today it was blue-and-black plaid wool short shorts, a gray V-neck bell-sleeve sweater, and knee-high black moccasins.

“What am I gonna to do with baggy navy cords and a white turtleneck?” Dylan handed the bag to Kristen. “Crash third-grade picture day?”

“Your call, Cottonelle.” Kristen hooked the Roxy over her shoulder.

A low-flying pigeon hovered above their heads, flapping its wings but not moving, like it was treading water.

“Ahhhhhh!” Dylan shouted at her shoulder. “I’ve been tagged!”

Students lazily making their way toward the BOCD main building turned and stared. Passing boys on their way to the overflow trailers snickered. The Pretty Committee burst into hysterics.

“Ahhhhh!” Alicia wailed. “It got me too!” She lifted her thigh and wiped her splotched gray Ralph Lauren skinny jeans on the door of a black Prius.

Massie grabbed a passing LBR by the arm, ripped the black, fake-Prada backpack off her shoulder, and held it over her own head.

The curly-headed blonde was too shocked to speak. Instead, she glared at Massie, her wide brown eyes begging for an explanation.

“
Buh-lieve
me.” Massie fart-waved her away with a dismissive shoo. “I’ll give it back once I’m inside.”

“Strike three!” Kristen shook her arm, but it was too late. The
fly-arrhea
had already seeped into the wool fibers of her gray sweater.

She reached for her bag. “Ineedmyclothesback.”

Dylan yanked it away. “You said
I
could wear them!”

“That was
before
I got hit!”

Dylan jumped back. “Sorry.” She hugged the quilted floral bag to her chest. “I need to pull a bag borrow-and-steal.”

Massie laughed from the safety of her Frauda canopy.

“No way!” Kristen gasped. “Those are
my
clothes!”

“You already
have
a crush,” Dylan pouted. “And he won’t be back at school for another week. So who cares what you wear?”

“Point.” Alicia lifted her finger in support of Dylan. “I have Josh, Claire has Cam, Massie has Dempsey, and you have Dune. Dylan is the only
C-minus
. She needs all the help she can get.”

Suddenly, everyone was silent, each girl wondering if
she
was the only one on the outside of the inside joke.

Massie’s dark eyebrows shot up. Her amber eyes widened. Her glossy lips parted. “C
minus
!
Crush
minus. Without crush.
Right
?”

Massie cocked her head and half smiled. “I knew I would too.”

“Fine, C-Minus, keep ’em,” Kristen muttered to Dylan. Then she rolled back her shoulders. “Who knows? This may be just what you need.”

“No, the
poo
.” Kristen giggled. “I heard getting pigeon-painted was good luck.”

“Funny.” Massie eyed the boys gathering at the end of the parking lot. “You don’t
look
so lucky.” She rolled back her shoulders and picked up her pace.

BOCD’s majestic brick building and its highly perfumed student body were well behind them. Now the overflowing trash bins were only steps away, and the parmesan cheese/rotten lettuce/cat food smell had become unbearable.

Massie dry-heaved. “Activate face cover in three . . . two . . . one . . . annnnd
go
!” She jammed her gold scarf into her nostrils then ushered the Pretty Committee past what resembled the set of
WALL*E
.