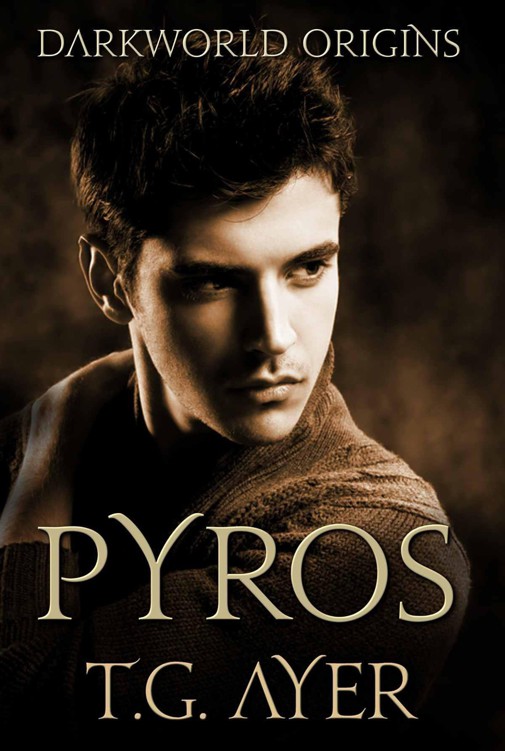 Find out more about T.G. Ayer at

All rights reserved. This book or any portion thereof may not be reproduced or used in any manner whatsoever without the express written permission of the author or publisher except for the use of brief quotations in critical articles or reviews.

This is a work of fiction. Names, places, businesses, characters and incidents either are the product of the author’s imagination or are used in a fictitious manner. Any resemblance to actual persons, living or dead, actual events or locales is purely coincidental.

This
eBook is licensed for your personal enjoyment only. This eBook may not be re-sold or given away to other people. If you would like to share this book with another person, please purchase an additional copy for each person. If you are reading this book and did not purchase it, or it was not purchased for your use only, then please return to Amazon.com and purchase your own copy. Thank you for respecting the hard work of this author.

Connect with Tee online at

The
DarkWorld Origins is a series of standalone short stories that will walk you through the origins of each character. Pyros is Logan Westin's story. I'd suggest you read Pyros either before or after Skin Deep to maintain the chronology of the story. If you wish to read Kailin & Logan’s story SKIN DEEP click the link and enjoy.

In the DarkWorld the things that go bump in the night are most likely true. And the problem is they are probably not sticking to bumping around in the night. They are everywhere. Your work colleagues, your teachers, even your friends. They’ve been living that way for a long time. And you haven’t noticed because they don’t want you to.

You’re much better off not asking any questions.

Somewhere outside of Chicago

It was supposed to be a special day.

Logan Westin's mother had promised to take him to his favorite diner. The one he loved to look at when they walked past on their way to the bus stop. Sometimes he'd slow down
, press his hands to the window and peer inside. Logan loved the look of the red-cushioned seats and the bright gleaming chrome.

Today was his chance to go inside and mother had said she'd get them strawberry milkshakes.

Logan was so excited he couldn't walk. He had to hop or run, do something more than just stroll along as if their destination wasn't a place that made him so excited he wanted to laugh out loud.

But Logan didn't laugh. Father wouldn't approve. And even though Father no longer lived with them, Logan knew he had to be careful. For Mother and for... For? Who else was he meant to protect?

Logan frowned and skidded to a stop in front of the diner. When he pushed the door open he inhaled the smells, and it all made him giddy with excitement. Coffee, and cooking meat and the polish from the black-and-white checkered linoleum beneath his feet. He pasted a huge grin on his face as he walked inside. Mother came next followed closely by a little girl whose laughter tickled his insides. She was as excited to be there as he was. They'd waited for so long.

When Logan turned to pull her pigtails he paused, stunned and confused. There was no one there. Even though her laughter still rang through the diner, the haunting sound so filled with happiness, so innocent and bubbly. He knew that voice. Knew if he reached out she'd hold his hand and her skin would be soft and smooth. Knew she'd grab his hand and pull him inside and accuse him of dragging his feet.

But there was nobody beside him.

Logan frowned
but when Mother put her hand on his shoulder he looked up at her smiling face and forgot his worries. She bent and told him to choose a booth, she'd get the milkshakes, and he nodded and raced to the one he wanted. As he approached the booth he saw a young couple in the next seat. They were holding hands and the girl was smiling, so happy, so bright, like the sunshine streaming in through the windows of the diner. The girl turned her head and saw Logan approach and she smiled wider and waved her fingers at him. The sun glinted off a pretty ring on her finger. The man shifted to the edge of his seat and twisted round to look at Logan. The sun shone on his blond hair making it look ablaze with light. The man grinned at him too and winked before sliding back into the booth.

Logan flushed at the attention the couple had given him. They were so nice. He felt his stomach twist as he wished, not for the first time, that his parents had a love like that. A love where they didn't argue, where his father didn't give his
mother black eyes and broken ribs. Logan slid into the leather seat and then the couple was forgotten as he grinned wider, looking through the window. This was almost the exact spot where he would stand and stare inside the diner. And here he was at last.

A movement beside him made him turn around. Mother was here. She placed the two milkshakes on the table, one in front of Logan and the other beside him. He stared at the second milkshake for a moment, a cloud of darkness filling his heart. He blinked and the glass was gone and Logan felt the loss of it like a kick in the gut. He sucked in a breath and looked up as Mother took a seat. She grinned just about as wide as Logan had.

And when she turned to face the window, the sun on her face, lighting up her red hair like living fire, Logan's heart swelled. Nobody in the world had a mother like his. She was the most special lady in the whole wide world. She closed her eyes and stayed still as the sun warmed her skin and she sighed.

And when she opened her eyes her smile disappeared and Logan's stomach hardened with fear. He knew that look. And when he turned to the window he knew what he would see.

He stood outside the window, his face filled with lines, his pale blue eyes dead and cold. He looked from Logan to Mother and sneered. Then he walked on and Logan prayed and prayed that he would keep walking.

But if anyone heard his prayer they also ignored it because his father stalked along the sidewalk and took the corner to the entrance, his spine stiff with anger. He shoved the door
open and came toward their booth. Mother scrambled from the seat and stood in front of the table, protecting them from Karl Westin.

"What do you mean, Patti? I just want to see 'em. It's a father's right. Birthdays are special." His tone was belligerent and demanding, and his eyes a touch cruel as they slid over Logan. He smiled but his yellow teeth made it look more like a grimace.

"Karl, please. You promised." His mother pleaded but as usual his father ignored her.

Logan swallowed. Something was wrong. Father had said kids.

Mother stepped closer to him, blocking his way. And as Father drew his arm back, Logan could see what was going to happened before it happened. His hand, tense and hard, high in the air, his hand curving down in an arc, the muscles in his arm and neck tight with fury, the sound of his hand as it met Mother's cheek. Logan felt a heat grow behind his eyes. Like anger welling up inside him. He forced his mind away from the heat, and brought his attention back just in time to see Father backhand Mother so hard a streak of blood appeared on her upper lip. The impact threw her sideways and her hip smacked against the side of the table. She held onto it, shaking her head, dizzy from the blow.

Logan's fingers curled into a fist. And heat simmered in his palm. Logan hissed with fear but the sound was swallowed by a wave of voices in the diner.

People were getting to their feet, upset at his father's behavior. But Karl Westin didn't care that he had an audience. He glared coldly at his wife and said, "Stay out of my way, Patti. I did what I had to do. I needed the money and I ain't sorry."

"What have you done?" Mother hobbled to her feet and came closer to Logan's seat. She held out her hand and Logan took it
grabbing on tightly. He scrambled out of the booth and stood at his mother's side. Her voice shook as she stood up to her husband. "You'd better leave this place, Karl."

"I ain't leaving without her. The deal is done."

Mother's fingers tightened around Logan's but he felt nothing. Nothing but the spasm of anger welling up through his body. What Father had said made him so very angry. He was scaring Mother. Threatening to take her? The thought made Logan sick to his stomach. Who?

But Logan couldn't think about that right now. All he could feel was the anger rising, the heat filling his body and his mind. He didn't hear the screams, didn't see the contorted faces. All he saw was his sneakers and the checkered tile floor of the diner.

All he could feel was the rise of heat in his body, the feeling that it would explode inside his head if he didn't get it out. And then he couldn't control it any longer.

He squeezed his mother's fingers shutting his eyes, gripping tight
. Fear spun his mind is blazing circles. He gasped for breath and then he shut his eyes afraid of what he would see. Heat gusted around him, wind scorching the tips of his hair. When he dared to open his eyes, the first thing he saw was a patch of melted checkered-tiled floor around a pair of sneakered feet. Black scorch marks blossomed from the sneakers.

Logan struggled to breathe, sobbing as smoke singed his lungs. He lifted his head and the sight that greeted him, the carnage that surrounded him
, stirred his gut and nausea rose. The image of a blackened restaurant marred his vision. His father stood before him, elbow lifted in front of his face. But he wasn't Father anymore. He was as black as night, his body steaming with heat, his face just a skull without features, without eyes. Logan glanced around and tears blurred his eyes. He blinked them away. Charred bodies sat unmoving at wrinkled and melted Formica tables, no longer their original bright blooming red. Even the ceiling above bore burn marks in a circular pattern.

In From the Cold by Deborah Ellis
Predator by Vonna Harper
Legend Beyond The Stars by S.E. Gilchrist
The Terran Representative by Monarch, Angus
The Soldier's Curse by Meg Keneally
New Olympus Saga (Book 4): The Ragnarok Alternative by Carella, C.J.
Gaffney, Patricia by Outlaw in Paradise
A Book of Memories by Peter Nadas
The White Dominican by Gustav Meyrink
Slumber by Samantha Young