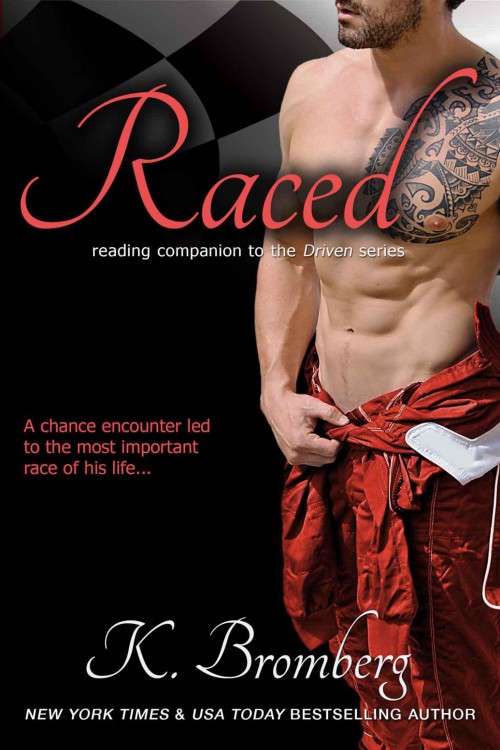 All Rights Reserved. In accordance with the U.S. Copyright Act of 1976, the scanning, uploading, and electronic sharing of any part of this book without the permission of the publisher or author constitute unlawful piracy and theft of the author’s intellectual property. If you would like to use material from this book (other than for review purposes), prior written permission must be obtained by contacting the publisher at
[email protected]
. Thank you for your support of the author’s rights.

FBI Anti-Piracy Warning: The unauthorized reproduction or distribution of a copyrighted work is illegal. Criminal copyright infringement, including infringement without monetary gain, in investigated by the FBI and is punishable by up to five years in federal prison and a fine of $250,000.

Copyediting by
Maxann Dobson of The Polished Pen

Except for the original material written by the author, all songs, song titles, and lyrics mentioned in the novel Driven are the property of the respective songwriters and copyright holders.

Other Works by K. Bromberg

Driven - Chapter Three and then some

Fueled - Between Chapter Five and Chapter 6

Fueled - Chapter Twenty-Two and a Half

Crashed - Chapter Forty-One and a Half

Other Works by
K. Bromberg

You are the
checkered
in my flag and complete my alphabet,
A to Z
.

You’ve given me the
rain to dance in
and the voice to
quack
with.

Your endless support, continued enthusiasm, and unwavering faith in my abilities overwhelm me on a daily basis.

This is the book I never intended to write, but you guys can be quite convincing … so this one is for you.

I race you. I book you. I chocolate you. I thank you.

When I started this journey, I had no intention of writing any part of these books in Colton’s point of view.
Rylee was my girl
. I knew how she thought, plotted out her motivation from one scene to the next, and understood her resistance yet draw to the egotistical mess of a man that is Colton Donavan.

Not once did I contemplate what Colton was thinking other than why he would push her away.

All of the books I’d been reading were from the first person female point of view. I connected with the heroine this way, related to her actions, and that’s what I set out to do for the readers when I wrote DRIVEN.

When DRIVEN was released, a blog commented in their review that they’d love to see some of the scenes through Colton’s eyes because he was so complex. I struggled with the criticism, not because it was invalid but rather quite the opposite. The reviewer was spot on in saying this, but hell, I’d never written from a guy’s perspective before. The thought scared the crap out of me.

I decided to challenge myself. I reached out to the blog and asked if they wanted a Colton point of view as an extra for their site. They accepted. And then I realized how lost I was because yes, I knew the dialogue that would take place, but not once did I ever question Colton’s thoughts.

So writing the scene was rough going at first. I had to find his internal voice, his personality. And after days of type, delete, type, delete,
repeat
, I was finally finished.

And it was in that moment I realized I loved Colton even more than I thought I did. I loved his tell-it-like-it-is nature, his sarcasm, and better understood the demons that haunted him. There was something so liberating writing the scene through his eyes. I loved the challenge, enjoyed figuring out how his mind worked, and loved stepping outside of the story and looking at it with fresh eyes and in a totally different perspective.

Feedback was positive on the scene when the blog posted it. I looked at FUELED, which was about eighty percent complete and all in Rylee’s point of view, and decided I needed to write some chapters from Colton’s perspective. After the ending of DRIVEN, I figured the only way to get him back in the good graces of readers was to tell that last chapter through his eyes. I wanted readers to understand him so they could forgive him a little more.

I sat down and wrote the prologue of FUELED in one sitting. That had never happened to me before. But when I was done, I knew I was going to be ripping apart eighty percent of the book I had completed so I could add in more of Colton’s voice.

In both FUELED and CRASHED, I was selective in the scenes I told from his perspective. I never wanted to give away too much or too little and always wanted his scenes to pack a punch, serve a purpose, but it never seemed like there were enough in the readers’ eyes. I was (and still am) messaged constantly, and asked what he was thinking in this or that scene. I debated the idea of rewriting the series through his eyes but thought maybe his humor, his draw, would lose its luster to readers. That they’d become bored with a story they knew all the ins-and-outs of already.

But I did think certain events would still hold merit if retold, so I asked you guys, my readers, which scenes those were. Not surprisingly, many of them were the same as the ones I wanted to write.

So here they are, the Colton Points of View. A few are revamped versions of ones you may have read previously on a blog, some are new chapters retold, and some are scenes you’ve never read before because we saw what Rylee was doing but never knew what Colton was doing.

I hope you enjoy them, I know I did writing them. It was fun getting back into his complex and humorous mind, experiencing him conquer his demons, and watching him learn how to race blindly off the track.

Many readers were curious what Colton thought during his first meeting with Rylee when she fell out of the storage closet. I was curious too; the problem was I had no idea. I didn’t even know why he was wandering backstage in the first place.

Sé que estás allí by Laura Brodie
The Expedition to the Baobab Tree by Wilma Stockenstrom
Born to Run by Bruce Springsteen
The Origin of Waves by Austin Clarke
Best Laid Plans by Prior, D.P.
The Man Plan by Tracy Anne Warren
11 Flying Solo - My Sister the Vampire by Sienna Mercer
The Julian Game by Adele Griffin
CONCEPTION (The Others) by McCarty, Sarah
Wandering Girl by Glenyse Ward