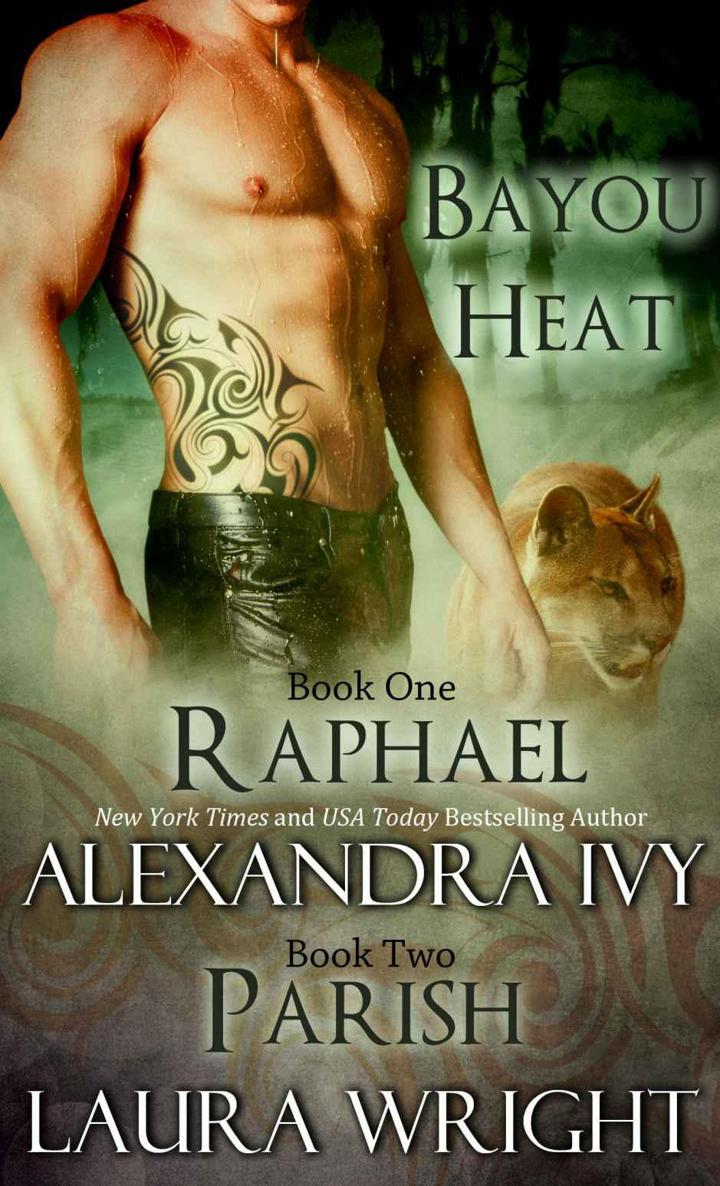 No part of this work may be reproduced in any fashion without the express, written consent of the copyright holder.

Bayou Heat
is a work of fiction. All characters and events portrayed herein are fictitious and are not based on any real persons living or dead.

Legend of the Pantera

To most people the Pantera, a mystical race of puma shifters who live in the depths of the Louisiana swamps, have become little more than a legend.

It was rumored that in the ancient past twin sisters, born of magic, had created a sacred land and claimed it as their own. From that land came creatures who were neither human or animal, but a mixture of the two.

They became faster and stronger than normal humans. Their senses were hyper-acute. And when surrounded by the magic of the Wildlands they were capable of shifting into pumas.

It was also whispered that they possessed other gifts. Telepathy, witchcraft, immortality and the ability to produce a musk that could enthrall mere mortals.

Mothers warned young girls never to roam alone near the swamps, convinced that they would be snatched by the Pantera, while young men were trained to avoid hunting anywhere near the protected Wildlands.

Not that the warnings were always successful.

What girl didn’t dream of being seduced by a gorgeous, mysterious stranger? And what young man didn’t want to try his skill against the most lethal predators?

As the years passed, however, the sightings of the Pantera became so rare that the rumors faded to myths.

Most believed the species had become extinct.

The words were still ringing in Ashe Pascal’s ears as the door to the trailer slammed behind her.

She grimaced as she gathered her clothes that littered the front porch and headed for her piece-of-shit clunker that was parked near the curb.

For once the drunken insults flung by her mother managed to hit a nerve.

Not that she was a whore. It wasn’t like she’d gotten paid for spreading her legs, was it?

Hell no, she’d spread them for free.

Or at least she assumed she had.

How else could she be pregnant? Immaculate conceptions might happen in the good book, but in the bayous of southern Louisiana women got knocked-up the good old-fashioned way.

A damned shame she couldn’t remember what happened.

If she had to pay the piper she should at least have enjoyed the dance.

With a shake of her head, she yanked open the door of her car and tossed her clothes on the cracked leather seat before climbing behind the driver’s wheel.

Shoving her key into the ignition, she breathed out a sigh of relief as the engine rattled to weary life. The way her pissy luck was running she’d expected the battery to be dead. Again.

She supposed there was an irony in the fact that she’d promised herself that she would start looking for a new car just as soon as she’d paid off her mother’s latest bar tab. She’d even driven to the bar to tell the owner that she was done being her mother’s personal banker.

And that’s when the trouble had started.

Barely aware that she’d shoved her car in gear, Ashe absently drove through the small town that hovered on the edge of the bayou, pulling to a halt across the street from the only bar in town.

The two story wooden building with a tin roof had at one time been painted a cheery yellow, but over the years it’d faded to a miserable mustard, with heavy green shutters that could offer protection during hurricane season. The entire structure was built on heavy stilts to keep the main floor off the ground. A necessary precaution in this area. The danger of flooding was a hundred percent, which no doubt explained why less than a few hundred people lived in the town.

She gave a humorless laugh at the neon sign that blinked in the thickening gloom.

It sounded like a hang-out for the local football team, or maybe a taxidermist’s shop.

Instead it was filled with a motley crew who she assumed came in from the oil fields, the shrimp boats and the dark shadows of the swamps. And of course, locals like her mother who were so desperate for a drink they were willing to ignore the thick air of aggression that filled the entire building.

The rest of the town avoided the place like the plague.

Including the pack of stray dogs that terrorized the rest of the town.

The Cougar’s Den was a cesspit of danger.

Her grim thoughts were abruptly interrupted as the humid spring breeze swept through her open window, tugging at her long, black curls and caressing her skin that remained a pale ivory no matter how much sun she got. Her eyes, as dark as a midnight sky, narrowed.

There was something in the breeze.

Something beyond the hint of azaleas, and newly bloomed roses from Old Lady La Vaux’s garden, and even the more distant smell of rotting vegetation that wafted from the swamps.

What the hell was that scent?

Yes. That’s what it was. A rich, intoxicating male musk.

Without warning, a flash of memory seared through her brain.

She was in the cramped barroom, trying to ignore the flat, unfriendly glares from the large group of men who were gathered around the pool tables at the back of the darkly paneled room.

One in particular had separated himself from the pack, staring at her as if she were a creature from another planet.

He was big. Six foot two at least. And powerful, with sleek, chiseled muscles beneath his tight white tee and black jeans.

In the dim light he looked like some exotic god.

His shoulder-length hair was thick and shimmered like molten gold in the dim light. His features were lean, stunningly beautiful. And his eyes…

They were the same gold as his hair, but flecked with hints of jade and in the darkness they glowed with an inner light.

She was no longer in the public room, but lying on a bed in a room upstairs.

It was dark and that aromatic male musk saturated the air.

A low, male voice whispered in her ear.

She groaned, her legs parting as she felt soft kisses blaze a trail down her quivering belly
.

“
You
.”
She clutched the soft quilt beneath her, her body on fire with need. It’d never been this way. Not this raw, frantic hunger that clawed through her with an addictive force
. “
I want you
.”

There was a low chuckle and she gasped at the feel of his hot breath against the sensitive skin of her inner thigh
.

Was the memory real? Or just her mind trying to sugarcoat the hideous truth?

With a low cry, she shoved the car back into gear and stomped her foot down on the accelerator.

There were no answers here.

What she needed was a hot meal and somewhere to sleep for the night.

Tomorrow she would worry about how she was going to take care of a baby when she could barely take care of herself.

Standing in the shadows beneath the bar, Raphael strained against the large man who kept him from charging after the sorry excuse for a car currently speeding away.

“Release me,” he growled, his eyes glowing with a luminous gold in the darkness.

“Goddammit, Raphael.” Bayon shared Rafael’s golden good looks although his hair was a shade paler and his eyes held more green. He was also built on bulkier lines. “Leash your damned animal and listen to me.”

Hard Evidence by Pamela Clare
Best Gay Erotica 2011 by Richard Labont&#233;
The Remorseful Day by Colin Dexter
Hellboy: The God Machine by Thomas E. Sniegoski
The Search for Artemis (The Chronicles of Landon Wicker) by Griffith, P. D.
Scandalized by a Scoundrel by Erin Knightley
Bless Me, Ultima by Rudolfo Anaya
Six Women of Salem by Marilynne K. Roach
Any Approaching Enemy: A Novel of the Napoleonic Wars by Jay Worrall
The Prophets of Eternal Fjord by Aitken, Martin, Leine, Kim