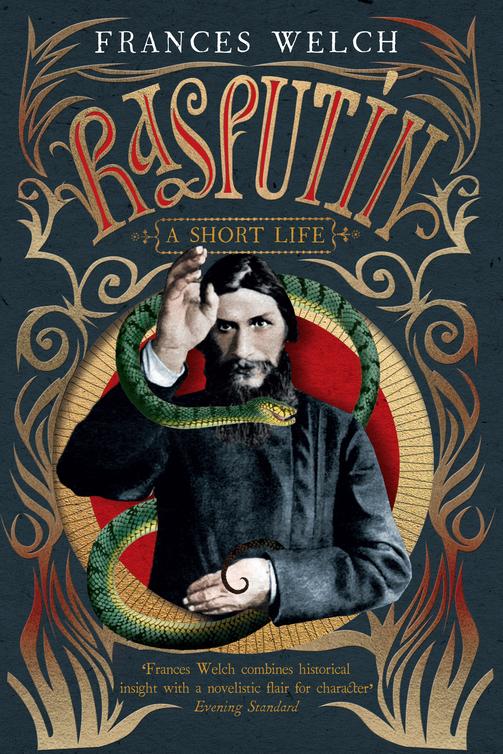 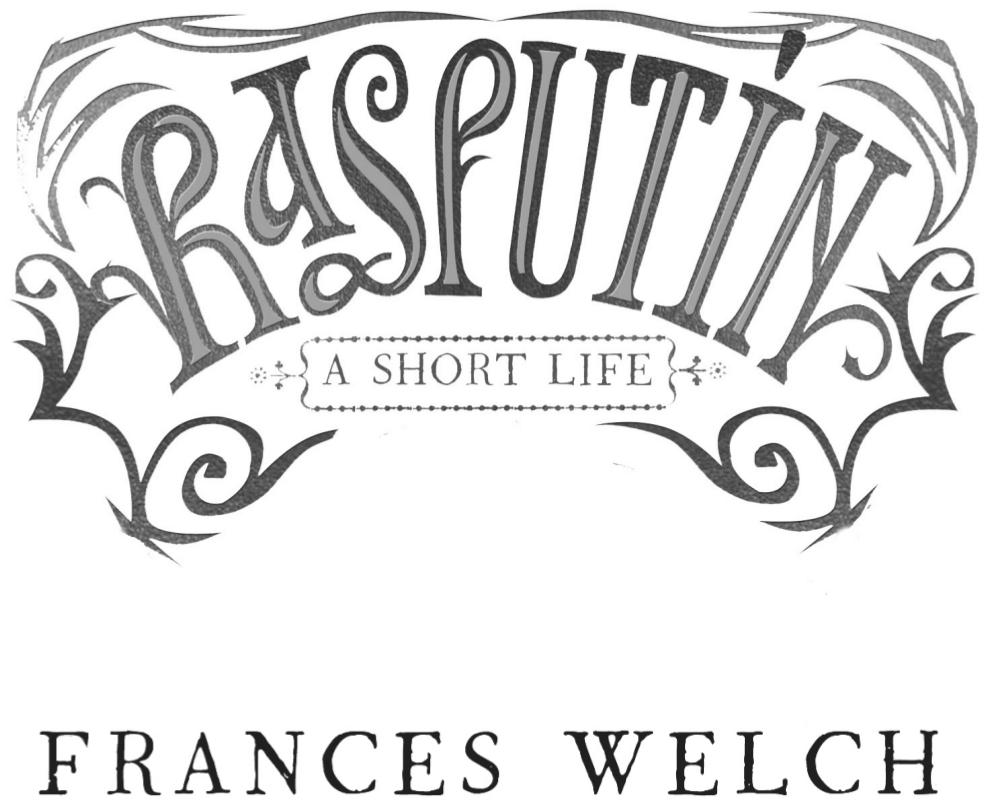 To my brother Nick 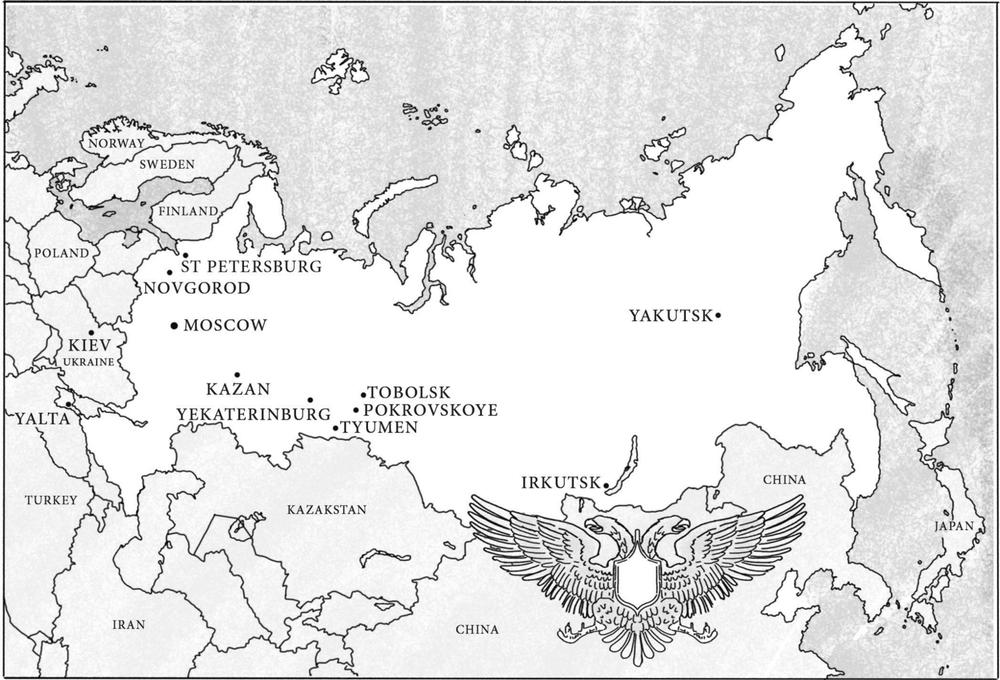 And listen to no prophet guiding them.

None but the fools believe in oracles,

Forsaking their own judgement. Those who know,

Know that such men can only come to grief.

Contents
âI Feel My End Is Near'

O
n Grigory Rasputin's last day alive the snow fell heavily upon St Petersburg. The sky at dawn had been dotted with what the Tsarina called picturesquely âwee pink clouds'. But the weather had then closed in, with severe frosts sending temperatures plummeting below freezing.

Rasputin's daughter Maria claimed that no living Russian could remember a harsher winter than that of 1916. The 18-year-old Maria found herself confined to her father's flat, where the fusty rooms steamed with fetid warmth and the pervasive smell was of cabbage and hot sheep's cheese.

The streets outside usually pullulated with her father's followers, the so-called âRasputinki'. Up to 400 had been known to gather before sunrise, waiting as long as three days to see him.

Grigory Rasputin's name was by this time known the length and breadth of Russia: he was the Siberian peasant âHoly Man' who had inveigled his way into the heart of the splendid pre-Revolutionary Court. His
mysterious rise had made him an object of hatred, fear and reverence.

His claims as a Holy Man, ridiculed and dismissed by some, were accepted, without question, by many who believed he had been sent by God. Devotees came in search of curious keepsakes: burnt rusks in scented hankies or soiled linen, limp with sweat. The most fervent took Rasputin's fingernail clippings, to be sewn into hemlines, despite one St Petersburg restaurant manager testifying that the Man of God's hands were âgrimy, with bitten, blackened nails'.

It was known that Grigory Rasputin had the ears of âthe Tsars', as he called the Tsar and Tsarina. He also had a reputation for being free with rudimentary petitions along the lines of âfix it, G'. So, alongside the devotees would be favour-seekers, filing through the lobby and up to the third floor, bearing lavish gifts: wine, carpets and even huge fish. Flowers were a favourite: âIdiots bring fresh flowers every day. They know I love them,' Rasputin would swagger ungraciously.

Some of the âRasputinki' arrived with wads of money, others were penniless and in need. Unable to count, Rasputin would bark: âCome on, fork it over,' before grabbing wads and redistributing them at random. One widow, who had lost sons in the war, was awarded 23,000 roubles. But most were not so lucky, despite Rasputin's regular, grand address to the queue: âI will help you all!'

On December 16, however, Maria Rasputin peered out of the window and noted that Gorokhovaya Street was empty.

In fact, there had been odd bursts of activity through the day, beginning with the drunken return of her father in the early hours. Rasputin was an uninhibited drinker and, within the preceding few days, had pulled off a restaurant's door bell and smashed a pane of glass in the door of his flat. His police security guards described him on such raucous returns variously as: âvery drunk', âcompletely drunk', âdead drunk' and âovercome with drink'. Maria had challenged her father about his drinking, but he was unabashed: âWhy shouldn't I drink? I am a man, like the others.' He considered wine âGod's own remedy.'

The Tsarina Alexandra, ever supportive of the man she referred to fondly either as âour Friend' or âGr', made only one reference to Rasputin's weakness, once describing him as âvery gay after dinner in the vestry, but not tipsy'.

Shortly after this particular return, the Man of God, known for his fakir-like shunning of sleep, was back on the street. A brief lie-down had set him up for his next trip, to his beloved âbanya', the bath-house, where he would have his genitals soaped by one of the âlittle ladies', as he called his women followers. Before succumbing to the soaping he would shout, confusingly: âDemons of lechery, get thee hence!' When his daughter remonstrated with him about women, he was equally unabashed. âIf Christ could speak with Mary Magdaleneâ¦', he would say, or, more graphically: âIt doesn't matter if you fornicate a little.'

These rousing sessions at the bath-house would be followed by brisk walks to the nearest church, during which he slapped his upper arms and rebuked Satan. At church, he would enjoy a well-earned prayer. As he said repeatedly: âWithout sin there is no repentance.' 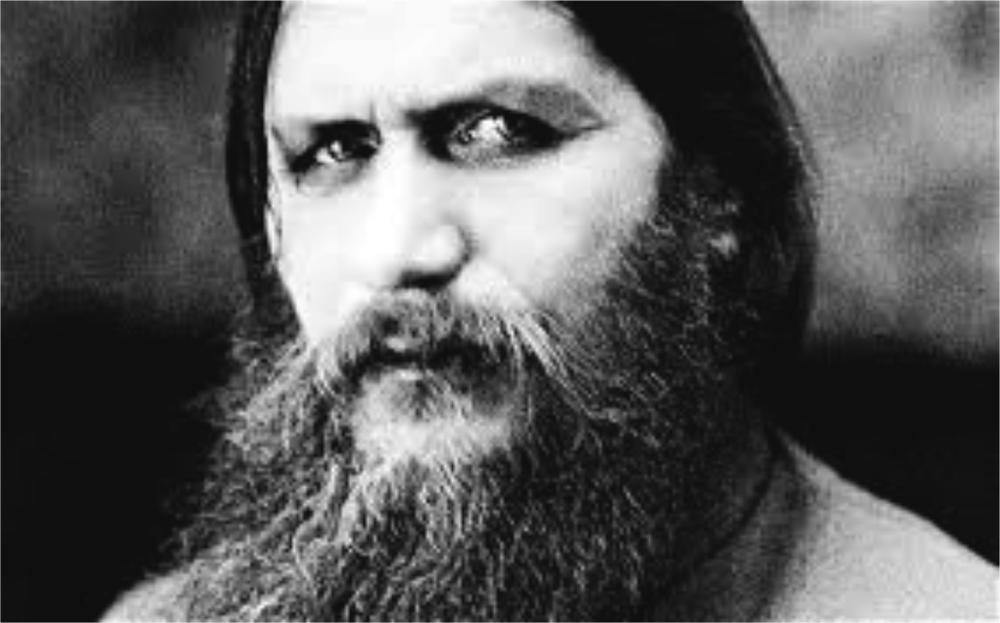 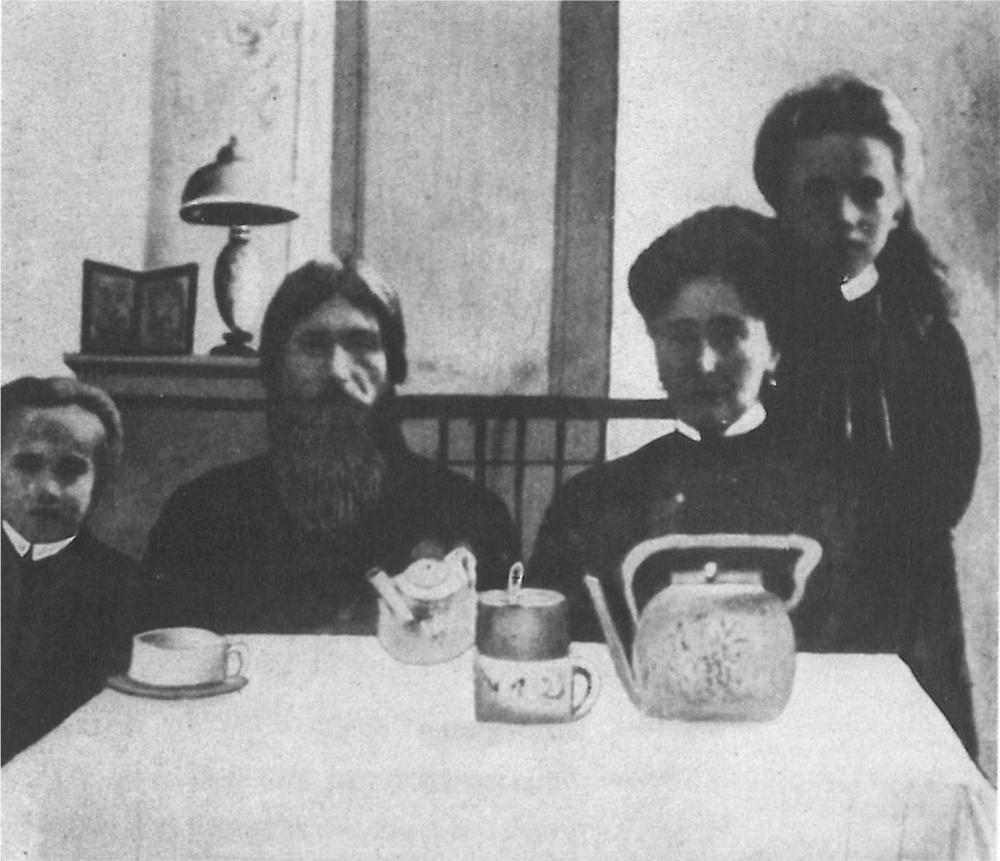 At tea with the Tsarina and two of the Grand Duchesses

In recent weeks Rasputin's movements had been more erratic than usual. He had grown wary of leaving Number 64. His privileged position at Court had made him enemies, and his innate, primitive paranoia had been fuelled by real threats. Within the last two and a half years at least ten attempts had been made on his life; he had been targeted and nearly hit by sledges, set upon by officers with sabres and stabbed, almost fatally, by a woman. In another incident, during the summer of 1915, a second woman had been leaving the flat when Rasputin had identified her, too, as a would-be assassin. Upon his command â âDrop what you have in your muff!' â a gun had clattered to the floor.

A month earlier, filled with morbid dread, he had written to his wife in Siberia, bidding farewell to his family. On parting from his son at the beginning of November, he had pronounced: âGoodbye, I will never see you again'. He had informed Maria gloomily: âI see a sort of black cloud over our St Petersburg house' and written her a letter, with the instruction: âDon't open it until I'm dead.' When Tsar Nicholas had asked for a blessing at their last meeting, a fortnight before, Rasputin had replied: âIt is you who should be blessing me.'

However, two days previously, on December 14, Rasputin had successfully ventured out to two of St Petersburg's grandest cathedrals. The Tsarina, whom he had seen four days earlier, described the outing ecstatically to her husband. As a granddaughter of Queen
Victoria, she had grown up speaking English and the Imperial couple communicated in English. But her writing style remained idiosyncratic: âOur Friend never goes out since ages, except to come here, but yesterday he walked in the streets with Munia [Maria Golovin, one of his most faithful and distinguished supporters] to the Kazan and St Isaacs & not one disagreeable look, people all quiet.'

On this last morning, the devoted Munia was with him again. She had braved blizzards to bring messages, including news of a successful petition: the dropping of a charge against Rasputin's secretary. The Tsarina had written peremptorily to her husband: âI beg you to write “discontinue the case” & send it to the Minister of Justiceâ¦ Otherwiseâ¦ there can be disagreeable talks.'

Over a full ten hours (midday to 10.00pm) Munia carried out chores for the man she called Father Grigory. In his egalitarian household, princesses and countesses might be found peeling potatoes and dishing out jellied fish, while servants relaxed at table. Munia, whose mother had been a maid to two empresses, helped other followers with their overshoes.

According to Munia, Rasputin seemed happier than he had been for a while, but still enigmatic: âHe was excited and said “Today I'm going”, though he wouldn't say where.' His good spirits remained, even after another visitor, an elderly woman, had quizzed him about the future of Russia and he had issued one of his gloomy but curiously accurate prophecies: âLittle mother, I feel my end is near. They'll kill me, and then the throne won't last three months.' Such confidences would have
been unusual; he preferred to keep older women at bay, snapping: âGet away, you old carcass!' or âI have no use for old goats!'

The freezing weather may have reduced the number of visitors. It did nothing to silence the telephone, which rang throughout the day. He had been woken that morning by a call from the Tsarina's closest friend, Anna Vyrubova. Rasputin received such routine calls from Anna or the Tsarina, or both, on a daily basis. There was nothing unusual about this last one.

According to the son of one of the Tsar's doctors, telephone calls from the Tsarina would be heralded by the âlugubrious voice' of a male operator: âYou are called from the apartments of Her Imperial Majesty.' With no specific name mentioned, the receiver of the call would be obliged, unsettlingly, to guess who was on the line. The main telephone at the Alexander Palace was in the Tsarina's mauve boudoir, wired up under a portrait of Marie Antoinette.

Rasputin had become an unexpected fan of the telephone. He would jump to, answering it himself and greeting the caller in a raspy voice, with a rich Siberian accent: âHere is Grishka.' In the peasant tradition, he usually referred to himself in the third person. He performed stark telephone cures. Once, when told that the sickly Tsarevich Alexis had an earache, he called the boy to the line: âYour ear doesn't hurt. Grishka is telling youâ¦ Sleep right now.' Fifteen minutes later the Palace rang to say the Tsarevich had fallen asleep.

In the last few weeks, however, the telephone had become a menace. His surprisingly long number â
646-46 â was widely known and he had begun to receive calls cursing him. His responses were of the âeye for an eye' variety. One caller said: âYour days are numbered,' to which he snapped back: âAs for you, you will shortly die like a dog.' The day before his death, he received a call from a woman: âCan you tell me where the funeral service for Rasputin will take place?' He replied: âYou'll be buried first!' On his last morning he was thrown, though only momentarily, by yet another anonymous call threatening his life.

During a brief lull in the snowfall that afternoon, he received a visit from the Tsarina's friend, Anna Vyrubova. She had come to ask his opinion about a pain in Alexis's leg. His reply was sanguine: âIt is not serious. Just keep the doctors away from him and he will be all right.' He offered a further, less accurate, prediction: âGrishka can tell you this much. Throughout the rest of his life Alexis will not be seriously ill again.'

Anna Vyrubova had brought an icon as a gift from the Tsarina. It was signed by the Tsar and Tsarina and their five children and came from the city of Novgorod where, a few days before, the Tsarina had visited an ancient prophetess. The prophetess, in mortifying chains despite her 107 years, had addressed the Tsarina flatteringly: âAnd you, the beautiful one, do not fear the heavy cross.' In fact, the formidable Tsarina had aged beyond her 44 years. Her facial expression was a daunting mix of hauteur and pain: the legacy of an already troubled life.