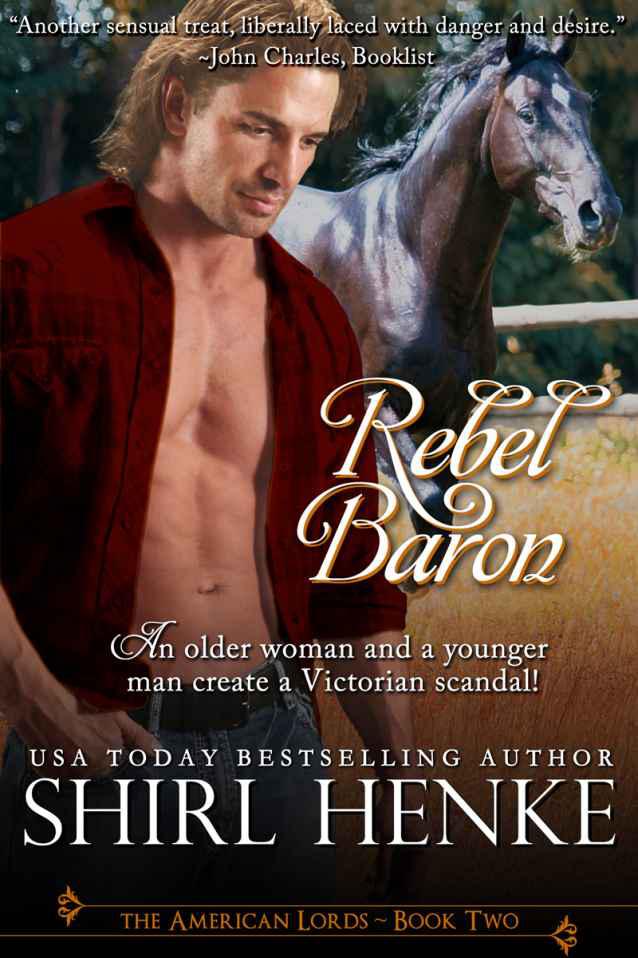 All rights reserved. No part of this ebook may be reproduced in any form or by any electronic means without the written permission of the publisher.

Other electronic works by Shirl Henke:

A FIRE IN THE BLOOD

“Billie Jo and the Valentine Crow”

LOVE A REBEL…LOVE A ROGUE

Brandon Shelby Caruthers stood before what had been the most elegant plantation house in Fayette County, Kentucky, one of the finest in all the vast Bluegrass Country. Where wisteria once vined lovingly on russet brick chimneys and gleaming white pillars supported a two-story white veranda, only blackened ash remained. His home lay in smoldering ruins.

The only things left standing were a few charred walls that even fire could not topple, but the paddocks for his prize thoroughbreds and the neat rows of cabins where the trainers and other farm workers lived had been put to the torch. Not even the dairy cellar or icehouse had been spared.

Once he had crested the rise at the edge of his property and saw the dense stand of burr oaks blackened by fire, he felt a gut-deep fear displacing hope. The dream of coming home to River Trails had kept him alive through the hellish months in a Yankee prison in Chicago, kept him walking until his feet were once again on Kentucky soil.

After being away at war for four years, he’d expected the whitewashed fences to be down, the fields trampled and muddy. Countless men, horses and wagons of Federals and Confederates alike had smashed everything. But some tiny compartment hidden deep in his heart had refused to relinquish the vision of River Trails’ magnificent Georgian outline silhouetted against the rolling fields. He'd envisioned it waking and sleeping, while he fought and especially when he lay rotting in prison.

He dismounted from the skeletal gelding he'd been given by a distant cousin in Louisville and started to walk around the well-worn brick path to the rear of the burned-out house. The place was utterly deserted. Nothing larger than the birds trilling in a stand of blue ash trees remained. Two years ago, his mother and sister had moved to Lexington where their Aunt Agatha lived. He was grateful neither of them had witnessed the destruction of their ancestral home.

Walking into the center of what had been a huge vegetable garden, he squatted down to scoop up a handful of dirt, inhaling the musky pungency when a voice broke the silence.

“You always were a fool over this place, but sniffing dirt is for blue tick hounds, not people,” the intruder drawled in a distinctive British accent.

Brand jumped up and whirled, opening his arms to envelop the slightly built man of mixed race who thumped his back as they embraced. “Sin—damn, man, I thought you were carried off by the Federals!”

Gideon Hercules St. John, who insisted his last name be given the proper English pronunciation, “Sinjin,” had worked hard during his fifty-odd years to live up to its first syllable. “In spite of the martial sound of my given names, the Federals found my stature, not to mention my age, less than imposing,” he replied, straightening up to his full five-foot height as they broke apart. “Also my attitude.”

His curly black hair was now liberally flecked with white and wrinkles creased his light brown face as he grinned at his friend and former employer. Returning the grin, Brand had never been so happy to see anyone in his life. “Twenty-five years in Kentucky and still you sound like an Englishman. That’s probably why the Yankees didn’t trust you. And, knowing you, you insisted on no less than captain's bars.”

Sin's dark eyes danced as he stroked his pencil-thin mustache. “Why, dear fellow, I'd never settle for less than colonel. General Kilpatrick did not take it well when I broached the subject.” He paused, studying Caruthers’s weary countenance. “Hell, Brand, I could scarcely chance encountering you on a battlefield. I would've had to shoot you.”

“And what makes you so sure I wouldn't have come out the winner?” Brand replied, falling easily into their old one-upmanship.

Sin snorted. “You rather conveniently forget that it was I who taught you to shoot. Besides, you lost the war, didn't you?”

“Yeah, we surely did, Sin…we surely did that. I always figured we would. But I didn't expect to lose Mama and Barbie…and then come home to this.”

“The cholera took hundreds of fine folks in the city, none finer than your mama, Brand. I spoke without thinking—”

“No, you only spoke the truth. You warned me not to go riding off with Morgan and leave River Trails unprotected.”

“You did what you felt you had to do.”

“I did what Reba wanted me to do.” There was a bitter edge to Caruthers's voice. “Did she marry her banker?”

Miss Reba Cunningham had been the most sought-after belle in Lexington and Brand’s fiancée before the war; but when the tide of battle turned against the South, she had broken their engagement and taken up with the son of a wealthy pro-Union family from Frankfort.

Sin nodded, knowing what a blow to Brandon Caruthers' pride that had been. “She and Earl Wilcox spoke their vows last spring, but gossip has it that their relationship is not precisely one of connubial bliss.”

Brand gave a mirthless laugh. “I should be grateful to the fool. He saved me from myself. I don't regret Reba anymore…but…”

“You couldn't have stopped Barbie even if you’d been here, Brand. She was young and fancied herself in love. One might even hope it will work out.”

“He's a riverboat gambler, for God's sake, Sin. What kind of life is that for a girl like my baby sister?”

“Barbara Caruthers is stronger than she looks. We each have to make our own mistakes, Brand,” Sin said gently.

“Like me joining the Rebs?” A faint trace of a grin played about his mouth, then vanished as he looked around him again.

“Mayhap I have just the medicine for your melancholy, old chap,” Sin replied. “Come along, now. There's a good fellow.”

As the two men walked through the spring bluegrass to a stand of blue ash trees, a soft whickering floated on the breeze. Brand’s long strides speeded up in response. Sin was forced to break into a trot to keep pace, coming up breathless as his friend gazed in rapt wonder at a coal-black stallion and two chestnut broodmares pacing nervously inside a small corral.

Brand walked around the rough-hewn wooden railing, approaching the stallion as if he were a ghost. The horse pawed the ground with excitement as his master stroked his muzzle. “Midnight Reiver, you beauty, you! I was sure you'd ended up in General Kilpatrick’s remuda. And your ladies are here, too!”

“Between them, the two armies managed to appropriate the rest of the livestock, but Mathias and I hid your favorites in the canebrakes by the river each time soldiers approached. “The lad's off gathering firewood. He'll be about soon and thrilled to see you've returned unscathed.” Mathias was a thirteen-year-old mulatto who had worked for Sin as a stable boy before the war.

“I owe you both more than I can ever repay,” Brand said, his throat tightening with emotion.

“Tut,” Sin replied, his dark eyes gleaming. “You'll repay us and remake the Caruthers fortune in the process. The house and outbuildings are gone, but you still own the land. And, the finest race horse in the Bluegrass. The track in Lexington's still open. As well as lots of others across the state. Even Cincinnati has been known to hold a horse race or two.”

“And place a bet or two?” Already Brand's mind was whirling with the possibilities for racing Midnight Reiver, standing him to stud and breeding the two prime mares he already owned.

The men discussed plans as they strolled to the cleverly hidden cabin where Sin had survived the incessant marauding of Northern and Southern armies. Inside the rude shelter, St. John broke out a jug of corn whiskey and they shared the contents, taking turns sipping with the heavy container slung over the shoulder the way Brand's father had taught them.

“We can do this, Sin. We can rebuild River Trails better than ever. Damn the Federals and the Confederates both to hell if we won't!”

“I thought you and Abigail Warring were going for a ride in Hyde Park,” Miranda Auburn said to her daughter Lorilee. Smoothing back a tendril of dark red hair that had worked its way free of the tight cluster of braids at her crown, she walked over to the window where her only child stood silhouetted in the pale light straining through the curtains. The heavy forest-green brocade valance and side draperies made a perfect foil for the seventeen-year-old's pale golden beauty. Every time Miranda looked at Lori she could scarcely believe that a plain wren like herself had given birth to such delicate perfection.

Lori’s pale lips trembled as she turned toward her mother with a forced smile. “Oh, we decided the weather was too beastly for riding out.”

Miranda studied the girl. In spite of being occupied much of the time with business matters, she knew her daughter well. “It is a bit rainy and damp, but our new Victoria would keep you nice and dry with the top pulled up.” In fact, Lorilee had begged her mother for the expensive new slipper carriage with its collapsible top for just such exigencies as rainy days. Miranda knew there was a good reason her daughter was not showing off her new toy. “What is it, dearheart?”

The misery was apparent in Lori's eyes, but she continued smiling in spite of it. “I fear Abbie has had a better offer. Her footman came half past the hour to deliver this.” She handed her mother a small piece of expensive stationery with the Easterham crest embossed on it.