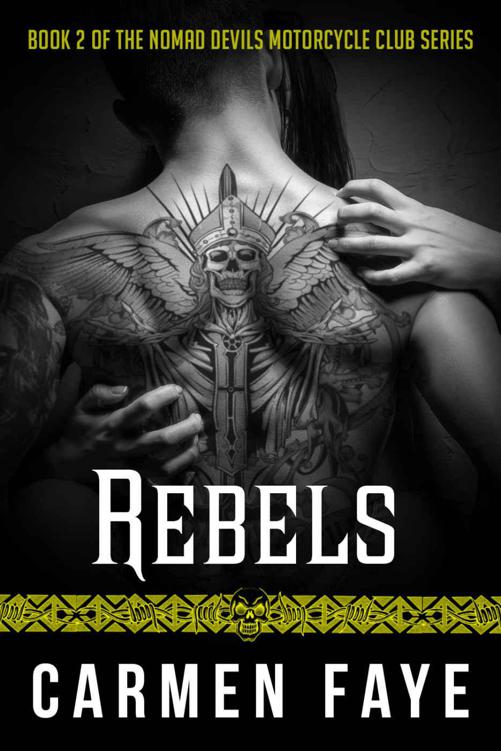 This is a work of fiction. Any names, characters, places, and incidents are products of the author's imagination or are used fictitiously and are not to be construed as real. Any resemblance to actual events, locales, organizations, or persons--living or dead--is entirely coincidental.

Rebels copyright @ 2014 by Carmen Faye. All rights reserved. No part of this book may be used or reproduced in any manner whatsoever without written permission except in the case of brief quotations embedded in critical articles or reviews.

“Can you tell us what happened?” the voice softened a bit to ask the question, but Melissa Fuller could sense the hostility underneath.

She may be new to the area, but she wasn’t new to the ATF. She was a damned good agent and that meant being able to read what wasn’t being said. In this case, it was disbelief.

It’d been a couple of weeks since she returned to the office, and Logan was still having her questioned. His hope, as he told her, was that she would remember more detail and be able to help them out. His tactic, however, was to keep her from her job.

Sure, she was still employed. But he’d shot down her hope of storming into Hudson’s house and taking them down. She hadn’t received any new assignments in the meantime either. Listening to the questions for the fifteenth time since she emerged from captivity, she thought back to that day and the conversation she’d had with Logan.

“Take them down for what?” Logan had stopped what he was doing and paid close attention to her words. “What did you see, Fuller?”

Melissa had been afraid to say much. She recalled Asher’s conversation about Logan and she wasn’t sure how accurate it was. There was no way she wanted to risk her own life or the life of anyone else.

“Nothing,” she had replied. “They’re criminals and I want to take them down.” Her own desires started to dwindle. She may have held a grudge against Asher Hudson, but something kept her from turning on him when he’d confided in her. Something told her that his story had been true even if his intentions were not.

“Well as of now we have nothing other than the kidnapping. If you saw something while you were there, that could change. If not, then we need to focus on that. It’s a start.”

Fuller toyed with her feelings on the matter. Logan was hiding something. He couldn’t be trusted. She knew that much. So she wasn’t sure she was ready to clue him in. Or anyone for that matter. Hell, would it be considered professional misconduct to fuck her captor? Or to fall in love with him?

It wasn’t like she could tell him about the drugs and guns. Then he’d know she was roaming free. If she was roaming free, then it meant she knew more than she had told anyone. That put her life in jeopardy as well. Especially if Logan was as crooked as Hudson had told her.

“I don’t know anything.” She shrugged.

“I thought you’d remember something this important,” he’d stated as if he didn’t believe her.

“I doubt it. I wasn’t really able to do much investigating.” She had laughed and walked off towards her desk, doing her best to hide the flutter in her heart each time she thought about Asher.

“Miss Fuller.” The voice brought her out of the thought. “Can we start from the beginning and work through it again?”

“Sure,” she answered and sat back against the chair. “I was on the mike with Wallaby and he said he’d be right back. Next thing I know, I’m being taken somewhere else”

“Who took you Miss Fuller?” The voice was pressuring again. “Where did they take you? Where were you at when you were talking to Agent Wallaby?”

“I was in a closet. I had gone through a tunnel to get there. But I was stuck.” She answered honestly.

“What closet?” The questions were always the same.

“It was supposed to be Asher Hudson’s,” Melissa answered with facts everyone knew. “But I’ve never been to his house so I can’t say it was or wasn’t.”

“Why were you in Mr. Hudson’s closet?” Yet another familiar question.

“I was leading a case on Mr. Hudson and his alleged involvement in criminal activities,” she answered. “I was given the plans to catch him in a meeting with some major weapons dealers.”

“Was he meeting with those dealers?”

“I don’t know. I was in the closet and then I wasn’t.” She repeated the same words she’d been saying for weeks.

“Who took you, Miss Fuller?”

“I really don’t know, Mr. Shepard,” she addressed him by the name she’d always known him as. “I was blindfolded and never saw their faces.”

“There was more than one?”

“Can you describe them?”

“It was dark when they came in,” she continued, “and then I was blindfolded. But one of them had cold and clammy hands. The other didn’t say or do much.”

“Where did that take you?”

“I couldn’t tell, only that it was to another room. I was still blindfolded,” she added.

“Was Asher Hudson in the home?” he asked.

“I’m not sure,” Melissa answered, again with a lie. “I was blindfolded.”

“Agent Fuller.” Annoyance crept into his voice. “What
do
you remember about the experience?”

Melissa thought for a moment. She had to pretend as though she were thinking really hard and trying to figure something out. The truth was, there was nothing she didn’t remember.

“Not much,” she confessed. “It was hot. There was a bed. I was given food and water,” she finished.

“Did anyone hurt you?”

The words brought back the sting of the spankings. The feeling that crept through her skin. The way her body arched as she longed for more. She swallowed the lump that had formed in her throat. The one that made her want to break down and confess her feelings. She shook her head with certainty.

“Not at all,” she answered. “It was really uneventful.”

“Boss must suck,” Nelson laughed his redneck laugh as the guys sat around in the clubhouse. “Wouldn’t have guessed by the hoards of bitches he beds, but guess they just aren’t as picky as the hot little agent.”

“What’s yourself, Nelson,” Dakota looked at his brother.

“I’m not the one that said he was uneventful,” Nelson laughed again.

Dakota wasn’t sure where his boundaries should lie. Asher was more than a brother and leader. He was a best friend. And he was angry and hurting. Dakota had never seen him like he’d been over the last two weeks.

Of course, Dakota had never seen him fall for one of them. Any of them. He wasn’t the falling type.

But this had him shaken up and the guys weren’t helping. Especially not Nelson. He wasn’t even supposed to know about the information. But somehow he’d found out. Normally, Dakota would have told Asher about it. But right now that had only set him off.

Instead of engaging in conversation with them, Dakota finished his drink and stood to leave.

“Going to focus on the job coming up,” he answered honestly. “Something you guys might consider from time to time.”

With that he walked past three club girls that called his name and out the door. He needed to go and talk to Asher. Before this got any worse.

“Uneventful?” Logan’s voice appeared before she realized he was standing in her office. Fuller laid the papers down on her desk and turned to face him.

“Nice to see you paying attention to what I say.” She rolled her eyes and waited to see what he wanted.

“How is being captured and held by one of the most dangerous men alive considered uneventful?”

Melissa had known this was coming. Every single time she was questioned, Logan followed it up with his own version. For some reason he seemed to think that she was going to tell him something she wasn’t telling Shepard. Ego didn’t begin to define Logan’s idea about himself.

“Being blindfolded and stuck in a room without human contact
is
uneventful,” she admitted. Granted, she was lying. She wasn’t alone very often. But Logan didn’t need to know that.

“I think we’ll try again on Thursday,” he spoke as he grabbed the chair opposite her.

“Logan, this has been going on since I came back. When are you going to give up?”

“I’m not,” he answered quickly. “You are an ATF agent, Fuller,” he looked directly at her. “You are trained for dealing with situations like this. And from what I recall when you were sent here, you’re pretty good at them. So I have no doubt that before this is over, you will remember something that will help us in our case against this man.”

“If I haven’t recalled anything significant in the past two weeks, I highly doubt it is going to happen,” she stated as though she had no use for all of it. “I was held yes,” she started to speak. “But I wasn’t tortured. I wasn’t allowed to examine the criminal activity. Hell, I wasn’t even allowed to know where I was or who I was with.”

“You were there a long damn time Fuller,” he insisted. “Something must have happened.”

“I only know what didn’t happen,” she retorted. “The agents I work with—my colleagues—gave me plans, inaccurate plans. Then they left me without contact when I needed them the most. And when I was taken by what we believed to be dangerous criminals, they abandoned me. I wasn’t rescued.”

“We have to abide by the laws, Fuller,” he countered. “We can’t just storm into random houses. And even if we could, no one seems to know exactly where his is.”

“Some effort would have been nice, Logan. Did anyone even try?”

“I won’t have you turn this on me.” He stood up. “I believe I said it was a bad idea. But you had to have your way. I had a different way of approaching this, as you recall.”

Melissa had to fight the urge to blush at the thought. She couldn’t seduce Asher Hudson. He’d seduced her.

“Well it was a pretty damn good way to teach me my lesson,” she conceded. “Leave me to die.”

“No. Thank God. But I’m also not working. When will I be cleared?”

“As soon as you tell me something useful.”

“Actually, that will be now.” The voice took them both by surprise and they lifted their heads to the doorway. Shepard looked from one to the other. “Agent Fuller has been questioned daily since her return. Other than adding it was hot in the room, her details have not changed.” He took a breath.

“She needs time,” Logan offered. “It was traumatic.”

“The department can no longer authorize the expenses being put into questioning this. No one is at fault in the kidnapping. But no one has any new information. The case against Asher Hudson will be stopped immediately. It will resume when any new evidence comes to light.”

Melissa felt herself breathe a small sigh of relief. It sounded so loud against her own ears that she was certain that everyone heard her.

“Agent Fuller may return to normal duties as of tomorrow.” Shepard announced and turned to leave. “And Agent Logan,” he said over his shoulder. “This
will
be the end of that discussion”

Melissa tried to hide the smile she felt inside. “So when can I expect my new case?”