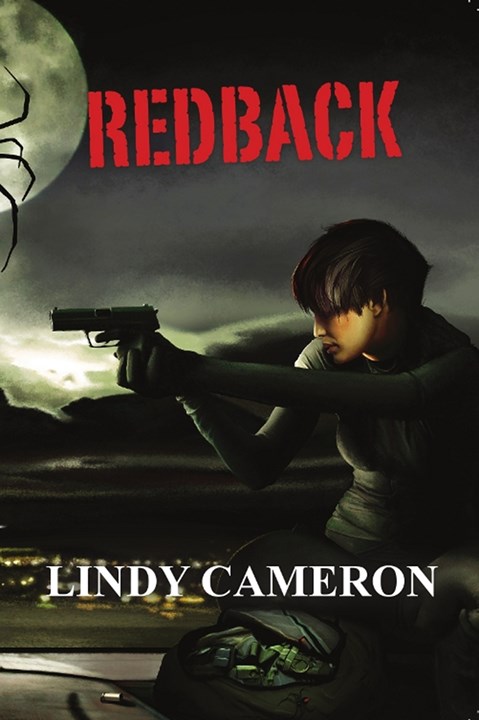 My all, my one, my love, my forever moo.

My friend and mentor.

A universe of thanks to my precious family, and family of precious friends:

Mum, Fin and Steve - wish you were still around the corner.

Chele Cooper - my split-apart, who makes everything possible.

Special
Redback
thanks to:

Helen, my proofing first line of defence; Sue, my first-draft reader; Paul for
on-the-spot research in Japan; Demet for the Turkish and Greek; David for the helicopters; Rae for
the cover type; Penny for the first edition; & Catharine for the green roof et al.

In memory of Bill Cooper: a most remarkable man.

Only one who is thoroughly acquainted with the evils of war,
can thoroughly understand the profitable way of carrying it on.
The Art of War
Sun Tsu 544-496 BC

It is forbidden to kill,
therefore all murderers are punished
unless they kill in large numbers and to the sound of trumpets.
Voltaire 1694-1778
All warfare is based on deception.
The Art of War
Sun Tsu 544-496 BC

It was the last good night of Lord James McQuade: he'd been wined, dined and
royally screwed. Truffles, a vintage red and sweet Miss Jones. Sixty-six years old tomorrow and not
destined to outlive his wolfhound.

Dargo looked down at the sad old drunk, dribbling and asleep in a dining chair with his pants
around his ankles. A peer of the realm who thought cheating on his wife with a tart from Chelsea was
a manly way to ring in his next year.

Lulu had been a birthday gift from a supposedly trusted colleague, but Dargo's presence was the
price, for Lord James McQuade was an irritation, a sacrifice, a pawn.

Dargo clenched his fist and flexed his wrist. An eight-inch blade of the finest Toledo steel
flashed from its cradle and across the back of Dargo's hand, the sound of its unsheathing more
thrilling to him than any of the noises Lulu had made to tease and please her lord.

But a man should only die of old age in his sleep. Any other death, he should see coming. Dargo
kicked his quarry in the foot.

McQuade stirred, opened bleary eyes and took a moment to focus on his fate. Lulu was gone and a
stranger stood over him with… What was that, a sword? His horror was matched by his disbelief.

'You've got ten seconds to put your oldfeller away.'

McQuade automatically reached for his trousers. It was pointless yelling for help. The private
dining room was soundproof. The intercom was over by the door.

'Shh,' Dargo pressed his finger to his lips. He waited until McQuade was presentable.

'If it's money you want,' McQuade offered.

'I apologise your Lordship,' Dargo said, rolling his blade-hand before him, elegantly tracing the
symbol for eternity, 'but you have a part to play in something far bigger than both of us.'

The speed with which Dargo now wielded his blade was remarkable. McQuade had but a moment to be
impressed by the action before he realised his throat and chest had been sliced in an X, from each
ear diagonally down across his pectorals.

Blood splashed across the remains of his last supper, bleeding into the white linen tablecloth.

Lord James McQuade: 65 years old tonight. And that's the end of it.

Dargo left the way he'd come: quietly, and with a key.

Scott Dreher waved his pen over the box marked 'occupation' and for the hundredth
time in a decade decided not to write 'journalist'. He knew the Australian authorities wouldn't care
that he was a reporter but, as so many countries did, it was easier just to put 'writer'. That way,
if anyone official asked, he could blather on about writing photocopier manuals, sci-fi, or the
great American novel.

The one time he had revealed his true identity, he'd spent 72 hours in a windowless backroom of
Tangier airport giving any number of possible reasons for an American reporter to be visiting
Morocco. In some countries, journalist equalled troublemaker, activist or even spy. And when
Algerian militants have just skipped across the border to blow up a French cruise ship in Tangier
Bay, then American journalist obviously equalled CIA.

Scott realised the young guy from the window seat was on his way back from the bathroom, so he
stood up in the plane's aisle to let him in. He slipped the Immigration card back into his money
belt and arched his back to get the kinks out before sitting again. He'd had the two business class
seats to himself all the way from London, until Mark the New Zealander had boarded in Dubai half an
hour ago.

Scott opened his laptop to have another go at the game. So far he'd died 16 times, lost three
squads in the jungle and was responsible for his entire platoon being blown sky higher when his
Hercules exploded over the Marianas Trench - twice.

WarP
was infuriating, ingenious and damn hard but then that was the point. It began life
as a recruiting tool for the Australian Defence Force, but its combat scenarios and authentic
military tactics had infiltrated the ranks of hard-core gamers. Always looking for sophisticated
play they were drawn to the game's hyper-realistic graphics and smooth action.
WarP
had gone
mainstream, big time, and made a truckload of money for its designers. The original online version,
like the ADF's equally popular
AttackSub
and the US military's
America's Army
, now had
nearly 10 million registered users worldwide.

Gamers literally got to design their own strike team instead of choosing characters from a bank
of generic animated steroid hunks. Scott had started in the program's Identikit Bank where he
created his soldiers from thousands of possible features, choosing everything from hair and eye
colour to height, weight, age and sex. He named his comrades, devised their personal histories,
families, even love lives and, most importantly, assigned their military training and combat skills.
One of the raves, to which Scott could now attest, was that the sense of losing comrades-in-arms was
almost palpable.

They were his team now and damn it if he didn't keep letting them down.

Oh Scotty boy, get a grip
. He took a moment, between keystrokes, to realign his
priorities. As much as he loved the challenge, except for the guilt of regularly annihilating his
crew, he was really only playing
WarP
for research.

'Yes!' he cheered quietly, as his Viper Squad dealt with the island rebel scouts, finally.

Kiwi Mark next to him grinned and then, in what amounted to game-upmanship, began piling his tray
table with a laptop, 20 or so compact and mini-disks, and a TekBox - the absolute latest in portable
game consoles from Nayazuki Firebolt in Japan.

'Believe it not,' Scott smiled, switching from the game to his research notes, 'I am actually
working.'

'Oh yeah, me too,' Mark said, nodded and glanced out the window like he expected to see some
flying sheep.

Scott looked down at his notes. He really was en route to Melbourne to interview the
WarP
design team. It was all as part of a series of articles on 21st century recruiting propaganda
and how the internet and the virtual world had been hijacked by real-world warmongers.
Now that
sounds as boring as a photocopier manual
.

Scott's research had started with how the West's modern enemies - the nefarious terrorist
brigades and loudly visible insurgent groups - had long been using the internet to communicate,
spread their various beliefs and attract human resources from an international pool.

Now he was investigating how the good guys got their message out. And 'bizarre' was not even a
strange enough word to apply to the very idea that some of the most world's powerful and legitimate
military authorities had resorted to playing games to boost their falling recruitment levels.

Scott returned to
WarP
and sent Captain Dash and a Viper sniper forward to take out the
rebel scouts.
Woops, oh shit, didn't see those innocent villagers taking refuge there.

Where were the moral crusaders who so liked to condemn violent computer games and TV shows for
breeding a generation of violent adults? Surely not silenced by the kids who actually understood
they were playing at killing game monsters? And why was there no universal condemnation about this
game now that their governments were advocating these same 'playgrounds' to recruit real live cannon
fodder for real-world warfare? Maybe the military should be just the place for violent game-addicted
teenagers? Those who don't stay home to become serial killers, that is.

Promoting war as a valid career option was what he was really writing about. Admitting that
would've got doors slammed in his face though, so his cover story was much more unassuming: he was
simply writing a feature on modern recruiting techniques.

So far his research had taken him to Washington, London and Tel Aviv. He'd interviewed one of the
Joint Chiefs at the Pentagon, observed an SAS recruitment program in the UK, and met a couple of Top
Guns from the Israeli Air Force. He'd also been to a few very strange places in his own head - he'd
discovered his own latent urge to 'shoot-em-all up'.

'Have you tried this one yet?' Mark asked him, swivelling his TekBox so Scott could see the
opening credits for
GlobalWarTek
.

'Yeah, but only the online version,' Scott said. 'And I really am playing this one for work. I'm
writing a thing on games, like these two, being used to recruit people to join the real
military.'

'Really?' Mark said, then tapped his TekBox. 'Oh shit. This disk is the stupid pirate version -
but I didn't say that. It's not working properly, hang on, I'll find the right…'

'Yeah sure,' Mark hit the return button a couple of times, 'but this version really is screwy, I
can't get past Level 2.'

'That's okay. It's the start of this particular disk I want to see again.'

'Where did you get this game?'

'In a market in Cairo last week,' Mark said.

The mini-movie prologue of
Global WarTek
, played by a million Japanese gamers and a
growing host of westerners since its English translation, was a visual treat in its own right. Like
most games it introduced the game's universe, the main characters and the battles they would
face.

But it should not feature a bearded three-eyed character carrying a rust-coloured book with
the word 'Rashmana' on the cover
.

That word should not be in this game.

A Man Called Ove: A Novel by Fredrik Backman
Paterno by Joe Posnanski
Today & Tomorrow by Susan Fanetti
State of Grace by Joy Williams
CapturedbytheSS by Gail Starbright
Amok and Other Stories by Stefan Zweig
The Vivisector by WHITE, PATRICK
Blood Safari by Deon Meyer
The Scottie Barked At Midnight by Kaitlyn Dunnett
A Witch In Time by Alt, Madelyn