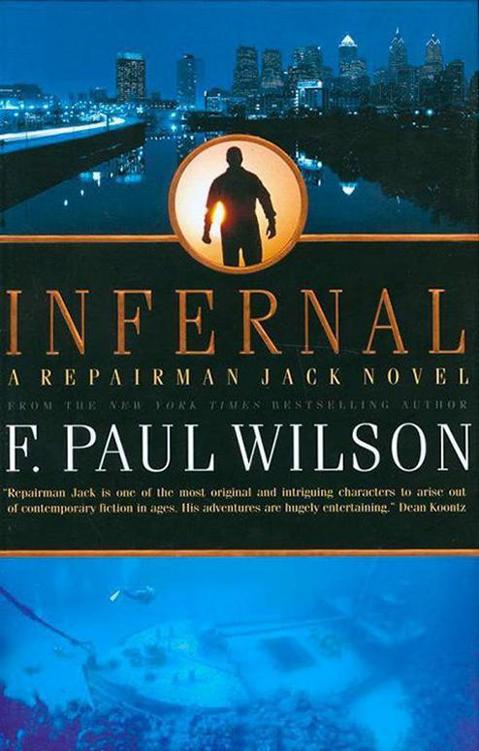 Unknown
SUMMARY:
The ninth Repairman Jack novel begins with a tragedy that throws Jack together with his brother Tom, a judge from Philadelphia. They've never been close and Jack, the career criminal, soon finds that he adheres to a higher ethical standard than his brother the judge. Determined to get to know his brother better, Tom convinces Jack to go on a wild treasure hunt together. Armed only with a map pointing the way to a desolate wreck off the coast of Bermuda, the brothers come across something much stranger, and much more dangerous than mere treasure. 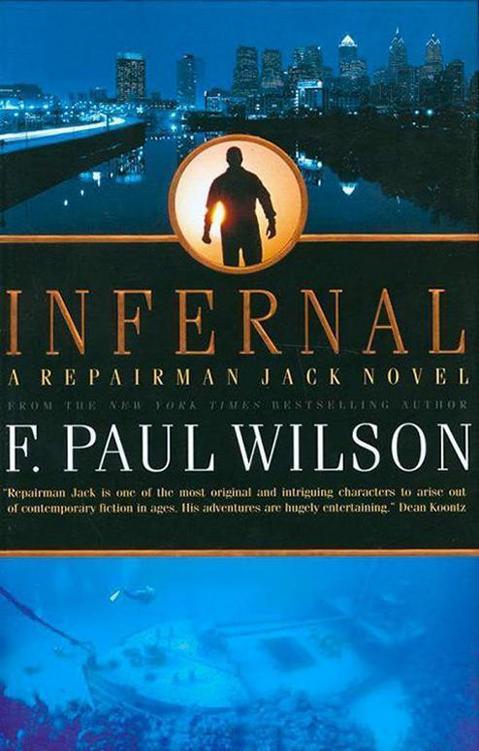 Thanks to the usual crew for their editorial help on the manuscript: my wife, Mary; my editor, David Hartwell; Elizabeth Monteleone; Steven Spruill (especially Steve); and my agent, Albert Zuckerman.

Thanks, too, to all the gunnies on the repairmanjack.com Forum for their spirited and informed debate about Jack’s new backup pistol. As usual, I did a little improvising along the way, so any errors in the weaponry department are mine.

Additional thanks to Peter Wilson, Douglas E. Winter, and Paul Stanko for insights on legal and judicial matters, and to Ken Valentine for his tip on disabling a revolver.

Jack checked his watch:
2:30
. Dad’s plane would be touching down in an hour.

“I should hit the road.”

He and Gia sat in the antiquated kitchen of number eight Sutton Square, in one of the most select neighborhoods in Manhattan. The low December sun kept the room bright despite the dark cabinets and paneling.

Jack drained his Yuengling lager. He’d rediscovered the oldest working brewery in the country a few weeks ago. The name had triggered memories of summer afternoons in his backyard, his father sipping from a Yuengling between tossing him pop flies. So he’d tried it and liked it so much he’d made it his official house brew. And Gia’s house brew as well, since he made sure to keep her fridge stocked with at least a six-pack.

Gia glanced at the Regulator clock from her seat across the round oak table where she sipped her tea.

“He’s not due in for an hour. You’ve got a little time.” She smiled at him. “Are you looking forward to seeing your father or not? You’re hard to read on this.”

He gazed at the love of his life, the mother of his unborn child. Gia seemed to thrive on her pregnancy. Jack had always thought the old saw about the “glow” of mothers-to-be was a sentimental fiction, but lately he’d had to revise that: No question, Gia glowed. Her short blond hair seemed glossier, her eyes brighter and bluer, her smiles more dazzling than ever. She was still in the warm-up she wore for her daily walks. Though nearing the end of her sixth month, she looked like other women do ending their third. The loose-fitting top hid the bulge of her abdomen, still barely noticeable even in more form-fitting outfits.

“I’m definitely looking forward to it. And to introducing him to you and Vicky.”

Gia smiled. “I’m dying to meet him. You’ve talked so much about him since your Florida trip. Before that, it was as if you were an orphan.”

Yeah, the Florida fiasco had changed things. He and Dad had been close during his childhood, but estranged—not completely, but mostly—during the past fifteen years. The goings-on in South Florida had forged a new bond between them. And Jack had learned that he wasn’t the only one in the family with secrets.

“Glad as I’ll be to see him, I’d prefer going to him instead of him coming to me. No lodging problems that way.”

Wide-eyed, Gia said, “Did he think he was staying with you?”

She stifled a laugh. “How did you tell him that
nobody
stays with his son?”

“Nobody except you.” And only when Vicky was sleeping over somewhere.

“How did you break it to him?”

“Told him my place is too small and too crowded.” He shrugged. “Best I could come up with on such short notice.”

His father’s holiday jaunt had been sprung on Jack. Dad had planned to be moved back to the northeast by now. He’d found a buyer for his Florida house and had had a signed contract in hand. Then, a week before closing, the buyer dropped dead. Talk about inconsiderate.

So Dad had had to put the place back on the market. He found another buyer, but the new closing wasn’t until mid-January.

He’d planned to be settled in time to spend Christmas with his sons and grandkids. Since that wasn’t happening, he’d decided on the spur of the moment to come north just for the holidays. Spend a couple of weeks up here, then head back to finish packing for the move.

Great, Jack had thought, until Dad had announced that his first leg involved a stay in New York City.

“But didn’t you tell me you think he has a pretty good idea of what you do?”

Jack nodded. “Yes. An
idea
. But he doesn’t
know
. And I’d like to leave it like that. It’s one thing for him to suspect what I hire out for; it’s another entirely for him to get involved in the day-to-day workings of my life.” He had to laugh. “He’ll be giving me all sorts of advice and maybe even trying to set up a pension plan for me. He’s very big on pension plans.”

“—coming here for the first time in ages to visit his son, and he gets stuck in a hotel. It’s not right.”

“Gia, we were together in his place down there maybe three or four days and he was making me crazy, always asking me where I was going or where I’d been, worrying about me if I was out late… like I was a teenager again. I can’t handle that.”

He could hear Dad’s voice in his head now. He’d meet Gia, his future daughter-in-law, and be enchanted by her and Vicky, but when they were alone he’d start in on how they did things differently in his day: First they got married,
then
started a family. Jack didn’t want to hear it.

A tough old bird, Dad, and traditional to the core.

“You’re making me sound like a Blue Meanie. I can’t have him nosing around my place while I’m out. He might pull open the wrong drawer. You know how that is.”

Jack remembered the time, early in their relationship, when she’d wanted to surprise him by cleaning his apartment. She’d happened upon a stash of guns and phony ID and he’d almost lost her.

“Well, did he buy your too-small story?”

“I doubt it—not completely. It was awkward, and it’s going to remain awkward the whole time he’s here.”

“It’s going to be
really
awkward when he sees your place and notices the daybed in the TV room.”

“I’ll think of something.”

She held up her hand. “Too late. I’ve taken it into my own hands. It’s a fait accompli.”

“As much as I love when you speak French, what are you talking about?”

“I canceled your father’s hotel reservation.”

“I’m the one who made it, remember? So I figure I have a right to cancel it.”

“Do you know how hard it is to find a hotel room this time of year?”

She smiled. “Virtually impossible. Which means he’ll have to stay here.” She reached across the table and took his hand. “Come on, Jack. Lighten up. He’s going to be Vicky’s adoptive grandfather. Shouldn’t she get to know him, and he her?”

Jack couldn’t argue. It would take his father ten minutes—probably less—to fall in love with Vicky.

“I just don’t like the burden it’ll put on you, being pregnant and all. The extra work—”

“What extra work? I’ll bet he makes his own bed. That leaves me with the burden of putting out an extra coffee cup and toasting extra bread in the morning.” She gave a dramatic sigh and pressed the back of her wrist against her forehead. “It’s going to be rough but I think I’ll be able to muddle through.”

“Okay, okay. He stays here.” He stared at her. “Have I told you lately that you’re wonderful?”

She smiled that smile. “No. At least not in recent memory.”

Tom quelled a ripple of anxiety as he started down to the baggage claim area. The flight had been perfect, the attendants beautiful, the food… edible. If this were Miami International he’d feel fine; he could make his way through there blindfolded. But he’d never been to La Guardia.

He supposed it was part of aging: You come to depend on things being comfortable and familiar, and get rattled by the new and different. But a big part was Jack’s damned secretiveness. He’d said he’d meet him in the baggage area, but what if he forgot? Or what if he got tied up in traffic or delayed by something? Tom wasn’t averse to taking a cab, but to where? He didn’t know Jack’s address. Oh, he had a mailing address, but Jack didn’t live there.

Relax, he told himself. You’re borrowing trouble. You have a cell phone and you know his number.

A gaggle of bearded men in black hats or yarmulkes and women in wigs and long-sleeved dresses descended ahead of him. These fifty or so Orthodox Jews—he’d heard someone mention that they were Hasidic—had occupied the rear half of the plane. Tom wondered what they’d all been doing in Miami. Not one of them looked tan.

He reached the bottom of the stairs and followed the crowd along a short corridor that opened into the baggage claim. He found a lake of expectant faces spread out in a thick semicircle. Dozens of black-suited, white-shirted limo drivers milled about, some holding up handwritten signs with the names of their fares, others simply killing time until a given plane arrived. Behind them stood relatives and friends waiting for loved ones. Jack would—should—be somewhere in the throng.

Possession by C. J. Archer
The Goblin Wood by Hilari Bell
If I Break by Portia Moore
Kethril by Carroll, John H.
The Axe by Sigrid Undset
New Reality: Truth by Michael Robertson
I Know Not (The Story of Fox Crow) by Ross, James Daniel
Raw Desire by Kate Pearce
Tempestuous/Restless Heart by Tami Hoag
The Bleiberg Project (Consortium Thriller) by Khara, David