Read Rescue of the Bounty: Disaster and Survival in Superstorm Sandy Online

Rescue of the Bounty: Disaster and Survival in Superstorm Sandy 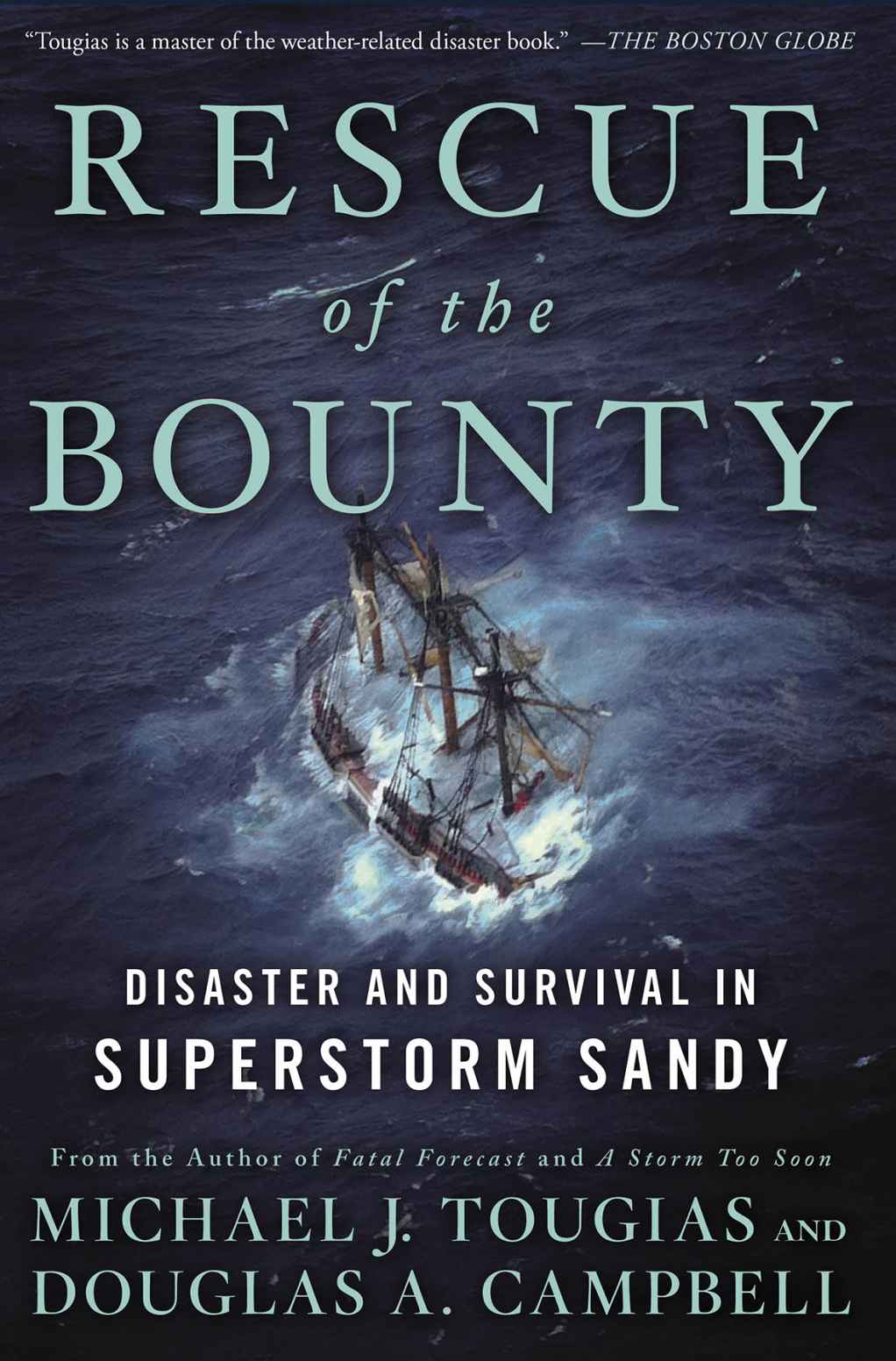 Thank you for downloading this Scribner eBook.

Chapter 3: A Voyage with Purpose

Chapter 11: From Trucks to Tall Ships

Chapter 14: Mutiny in Her Blood

Chapter 22: A Rushed and Urgent Call

Chapter 25: One Small Strobe All Alone

Chapter 30: Running out of Time

Chapter 31: Held by the Sea

About Michael J. Tougias and Douglas A. Campbell

To all the librarians who have helped my writing and speaking careers. Our public libraries are national treasures.

To those who loved Robin Walbridge and Claudene Christian and who now grieve.

PART ONE
CHAPTER ONE
THE SPEECH

The autumn afternoon was perfect, untroubled on the New London, Connecticut, waterfront. The rippled river water sparkled; the blue sky was washed clean as fresh laundry. The late-October sun came low behind the woman’s right shoulder, casting sharp, long shadows before her. For twenty years Beth Robinson had been part of the engrossing world of tall ships and she still thought,
This is why we go to sea, days like this.
She walked onto the City Pier, where, ahead of her, a crew of sailors hustled to their assignments on deck below the three towering masts of the historic square-rigger
Bounty
. Robinson, a relief skipper on a nearby schooner, knew the ship, a 180-foot, fifty-year-old wooden ship—an expanded replica of the original 1784 ship HMS
Bounty
. She made a casual inspection, passing the soaring sixty-foot bowsprit, thrust upward toward shore, before reaching the freshly painted black hull. She knew
Bounty
’s captain, too, Robin Walbridge, and thought her friend of two decades had his boat looking pretty good.

Robinson had come to see Walbridge for just a passing hello.

“Hi, Captain,” she called out.

Walbridge gave a similar greeting—nothing elaborate. He, like Captain Robinson, was native New England stock, a taciturn man who saw eloquence in one’s work and ideals, not in words or attire.

Walbridge mentioned that
Bounty
was preparing to leave port, but the exchange was brief as the captain was focused on a serious problem and had urgent business to attend to.

During the day, several of Walbridge’s fifteen subordinates had received text messages or phone calls from family and friends who knew the ship was set to embark on its annual southward voyage, heading for a winter dock. The callers were concerned about a hurricane, brewing in the Bahamas and heading north, named Sandy.

A twenty-five-year-old crewman, Joshua Scornavacchi, had received a text message from his mother in Pennsylvania. She was worried about the storm. “I’ll be fine,” he replied, adding that
Bounty
had been through rough weather before.

Another twenty-five-year-old got a worried text message from her mother on Cape Cod. The young woman, a maritime academy graduate, was not concerned, though, nor were most of the other crew members, many of them considered “green” sailors as far as experience aboard
Bounty
was concerned.

However, among the more experienced crew, there were worries. The chief mate, John Svendsen, forty-one, now in his third season aboard
Bounty
, had spoken earlier with his junior officers. The third mate, Dan Cleveland, on board
Bounty
five years, and the bosun, Laura Groves, on board three years, had doubts about sailing offshore toward a hurricane. The second mate, Matt Sanders, was moderately concerned. The conversation convinced Svendsen that he needed to talk with Walbridge and present the captain with options.

Svendsen knew that the New London City Pier, which projects out from the west bank of the Thames River, would be exposed to heavy weather by way of Long Island Sound, which lay two miles south via a straight path of open water.
Bounty
was moored to the exposed south side of the dock, where the fetch to the Sound invites trouble. Svendsen knew that if
Bounty
remained where she was and Sandy arrived, the storm’s winds and surge could race up that fairway, presenting the possibility of serious damage to the ship.

Svendsen, who had become aware of the hurricane two days earlier, thought there were better choices than heading offshore.
Bounty
could simply sail farther up the Thames to where the US Coast Guard Academy’s tall ship
Eagle
had docked.
Bounty
could sail east, to where the city of New Bedford, Massachusetts, had a hurricane barrier—a stone wall across its deep harbor.
Bounty
could also sail farther north, to Boston. Svendsen even thought sailing toward Bermuda, 650 miles to the southeast, might be an option.

From the moment the crew awoke on Thursday, October 25, 2012,
Bounty
had been crammed with activity. The crew was preoccupied with more important considerations than their coming departure. Company was expected—special visitors.
Bounty
’s owner, a wealthy Long Island businessman, had invited the crew of the navy’s newest submarine, the
Mississippi
, for a daysail aboard
Bounty
on Long Island Sound.

Soon after daybreak, the crew was busy preparing. One team washed the decks. Two hoses were neatly stowed on deck: one to reach forward to the bow, and the other to extend to the stern. On the ship’s third and lowest deck, down a set of stairs and then a ladder, two diesel engines powered electric generators whose most important function was to run the electric bilge pumps that kept the ship afloat. Without pumps, like any other leaky wooden boat,
Bounty
would eventually sink.

Below the floorboards of the third deck, which housed crew quarters and fuel and water tanks, pipes and hoses extended from the two pumps to the bilge space. The hoses sucked up water in the bilge space and discharged it amidships back into the sea. But the process could also be reversed and seawater could be sucked up into the deck-washing hoses. As the team used this seawater that bright autumn morning, one team member noticed something different, troubling. Instead of a powerful stream, the washdown hoses gave him barely enough spray to wet the deck boards. Normally, the pressure in the hoses would be too high if some of the water wasn’t diverted overboard. Yet this morning, even using the full capacity of the pump, the crewman could not fully charge the hose. He mentioned the problem to his two teammates, who seemed unconcerned, and then reported his observation to the ship’s engineer. In the end, the pump problem was ignored.

The sun was high when the crew from the
Mississippi
arrived at the City Pier.
Bounty
’s owner, Robert Hansen, and her captain, Robin Walbridge, greeted them. Then
Bounty
’s crew cast off the dock lines and, engines running, pointed her lancelike, uptilted bowsprit south on the Thames.

Bounty
’s crew led the visiting submarine sailors as they climbed aloft in the 111-foot-high rope rigging, teaching them how to set the sails in a light breeze. For a while, the canvas billowed white and full until the wind died.
Bounty
circled the Ledge Lighthouse, a redbrick, two-story cube just off the mouth of the Thames, drifted in place for a while, and about midafternoon motored back to the City Pier.

Walbridge made a point to catch one of his guests—New London dockmaster Barbara Neff—before she went ashore. He told her that although
Bounty
had originally been scheduled to spend another night in the city, he had decided to leave that evening due to the oncoming hurricane. He explained that sailing around the hurricane could give
Bounty
a good boost of following winds after the storm passed.

Neff was mildly disappointed. When she got ashore, she and some others planned to set up a Halloween corn maze on the waterfront—she thought that
Bounty
’s tall masts in the background would add a nice touch. However, having been acquainted with Walbridge for over fifteen years, she knew him to be low-key and intelligent, never cocky or pompous, and she felt his explanation for the change of plans both understandable and reassuring. She trusted his judgment.

As Walbridge talked with Neff, his crew accepted an invitation to visit the
Mississippi
. Walbridge joined them, but was among the first to return to
Bounty
, sometime before five o’clock.

Now Chief Mate Svendsen saw his chance. Asking Walbridge to join him on the dock and away from the rest of the crew, he told the skipper about the apprehension among the junior officers.

“There are people concerned about the hurricane,” Svendsen told his boss. “I want to discuss options, including staying here.”

Walbridge listened to his chief mate, as he always did, then offered his own thoughts. “A ship is safer at sea than in port,” he told Svendsen, and said he would hold a meeting with the crew and explain his plan.

At about five o’clock everyone returned from the visit on the
Mississippi
. Often a recluse aboard
Bounty
, Walbridge nevertheless conducted an all-hands meeting every day, so this muster was far from unusual. Walbridge used these musters as teaching opportunities, for in part he saw his purpose aboard
Bounty
as an educator. He had come from a family of teachers as far back as his grandparents and some of his great-grandparents.

This muster would be different, though. Walbridge, celebrating his sixty-third birthday that afternoon—a low-key event he marked by splurging on a bottle of ginger ale—climbed atop a small deckhouse called the Nav Shack (below its roof were the ship’s navigational equipment and chart table) and in his quiet way began talking.

In retrospect, this moment seemed preordained. Even as a boy, Walbridge thought through his options in silence, arriving at a decision well before those around him realized there were choices to be made. Similarly on this afternoon, he had decided, selected a path—his path—and he did not seek suggestions. Certainly there were alternative routes for
Bounty
in the days to come. Yet, like the chess player he’d been for fifty-five years, the captain considered all those moves and dismissed them.

“There is a hurricane headed this way,” he told his fifteen shipmates with the falling sun at his back. “It’s called Frankenstorm. There will be sixty-knot winds and rough seas. The boat’s safer being out at sea than being buckled up at a dock somewhere.” Then he laughed a little and, as if in jest, added, “You guys will probably be safer if you take a train inland.” The levity ended there.

“I know that some of you have received phone calls and text messages from worried friends and family. If anyone wants to go ashore, now is the time. I won’t think any less of you. Come back to
Bounty
when the weather clears up.”

No one budged, nor did anyone speak.

“My plan is to sail south by east, to take some time and see what the storm is going to do.” He told them about hurricanes
Bounty
had encountered under his command. The ship had made it through then, and she would do so now.

Cullotta: The Life of a Chicago Criminal, Las Vegas Mobster and Government Witness by Dennis N. Griffin
Jerry Junior by Jean Webster
Bystander by James Preller
Alibi in High Heels by Gemma Halliday
1 PAWsible Suspects by Chloe Kendrick
The Lost Voyager: A Space Opera Novel by A. C. Hadfield
Samson's Deal: A Laid-Back Bay Area Mystery (The Jake Samson & Rosie Vicente Detective Series) by Shelley Singer
Forever As One by Jackie Ivie
Out of Promises by Simon Leigh
River of No Return : A Jake Trent Novel (9781451698053) by Bertsch, David Riley