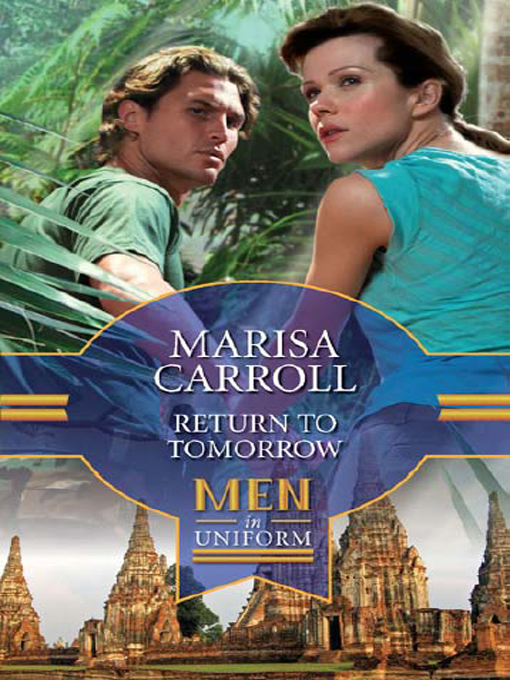 Courteous, courageous and commandingâthese heroes lay it all on the line for the people they love in more than fifty stories about loyalty, bravery and romance. Don't miss a single one!

A Vow to Love
by Sherryl Woods

Who Do You Lov
e
?
by Maggie Shayne and Marilyn Pappano

A Randall Returns
by Judy Christenberry

The Man from Texas
by Rebecca York

Heart of the Tiger
by Lindsay McKenna

The Sheriff of Shelter Valley
by Tara Taylor Quinn

A Match for Celia
by Gina Wilkins

That's Our Baby!
by Pamela Browning

Baby, Our Baby!
by Patricia Thayer

My Baby, My Love
by Dani Sinclair

The Marriage Conspiracy
by Christine Rimmer

The Woman for Dusty Conrad
by Tori Carrington

The White Night
by Stella Bagwell

One Last Chance
by Justine Davis

By Leaps and Bounds
by Jacqueline Diamond

Too Many Brothers
by Roz Denny Fox

Strangers When We Meet
by Rebecca Winters

Babe in the Woods
by Caroline Burnes

Serving Up Trouble
by Jill Shalvis

The Major and the Librarian
by Nikki Benjamin

A Family Man
by Mindy Neff

The President's Daughter
by Annette Broadrick

Return to Tomorrow
by Marisa Carroll

Remember My Touch
by Gayle Wilson

Return of the Lawman
by Lisa Childs

If You Don't Know by Now
by Teresa Southwick

The Good Daughter
by Jean Brashear

The Hero's Son
by Amanda Stevens

On Pins and Needles
by Victoria Pade

AKA: Marriage
by Jule McBride

Pregnant and Protected
by Lilian Darcy

is the pen name of sisters Carol Wagner and Marian Franz. They have been writing bestselling books as a team for almost twenty-five years. During that time they have published more than forty titles, many for the Harlequin Superromance line and Feature and Custom Publishing. They are the recipients of several industry awards, including a Lifetime Achievement Award from
RT Book Reviews
and a RITAÂ® Award nomination from Romance Writers of America, and their books have been featured on the
USA TODAY,
Waldenbooks and B. Dalton bestseller lists. The sisters live near each other in northwestern Ohio, surrounded by children, grandchildren, brothers, sisters, aunts, uncles, cousins and old and dear friends.

For Nancy Roher, editor and friendâ¦because you knew Rachel deserved a love of her own before we did.

“I
DON'T THINK IT'S
a good idea for Rachel to be going back to Thailand.” Micah McKendrick swirled the ice in his glass of lemonade, special lemonade, laced with smooth, aged whiskey. He watched his brother from hooded blue-gray eyes.

“You aren't going to get an argument from me.” Simon McKendrick settled back against the cushions of the couch, his gaze wandering around the firelit room. It was a shambles; cushions and pillows scattered everywhere, paper plates and cups sitting on tables and cluttering the mantelpiece. It was exactly what a room that had just housed a combination rained-out Fourth of July picnic/high-school graduation celebration was supposed to look like. Leave it to his Annie not to let an unseasonably cold and wet Chicago holiday spoil her funâ¦or the celebration of Doug's triumph. A year ago he wouldn't have believed the boy would achieve that goal. He had Micah and his bride to thank for setting his stepson on the right path.

The twins, and the dog, raced through the room, stirring debris as they went. “Slow down,” he yelled automatically.

Domestic chaos, he was learning, was something you got used to, living in a house where there were two teenagers, two almost-teenagers, and one just-about-on-
his-own college junior and a geriatric dog underfoot and under the same roofâhis roof and Annie's. He could hardly believe they'd been married a year and a half.

“Didn't you try to talk her out of it when she came down here last month?” Micah asked, returning to the subject uppermost in both their minds.

Simon didn't answer for a moment. Instead, he glanced at Micah over the rim of his glass. There was a little more silver in his thick, dark hair but, all in all, he looked better than Simon could remember seeing him in a long time. Domesticity, hard as it was to believe, seemed to suit his brother almost as well as it did himself.

“Of course, I did.” Simon looked down at the floor. Half a hotdog bun had rolled off a plate and lay by his foot. He picked it up and put it on another abandoned plate on the coffee table. “I talked a blue streak.” And he'd gotten exactly nowhere. Rachel, the eldest of the three siblings, was every bit as stubborn as he and Micah.

“How about Annie?” Micah asked.

“Annie thinks she should go.” He didn't often quarrel with his wife. But on this subject they'd had a major difference of opinion. “She thinks it will do her good.”

“Carrie thinks so too.” Micah shook his head in bewilderment. “How can going back to the place that stole half your life do you any good? Women. Their reasoning is beyond me.”

Simon knew living with and loving his taciturn and reclusive brother was a challenge that many women wouldn't have accepted. But Carrie Granger McKendrick,
like his Annie, wasn't just any woman. She was one in a million. They'd both been luckier than any man deserved to be to have found them.

“Carrie knew Rachel had been in touch with this Dolph character three weeks before I did,” Micah continued.

“I checked out Father Dolph,” Simon revealed, taking a healthy swallow of his lemonade. It went down smooth and mellow. He gave Micah a small salute in appreciation of the added whiskey. “He's legit. He's in charge of one of the smaller, Church-affiliated refugee camps along the Thai-Laotian border. I didn't visit that one when I was there last fall, but they're all pretty much alike.” His voice was grim. “Adequate food and housing but a pretty bleak way to live.”

“Unless you consider the alternativeâbeing marched off to Saigon or Hanoi or Phnom Penh as forced laborâor worse.”

“We don't know for certain that would happen.”

“The hell we don't. Tigerâ¦” Micah broke off, leaving the sentence unfinished.

“I should have known you were still in contact with the guy.”

“Don't change the subject.” Micah took a big swallow of his drink.

“Be careful how far you trust the man.” Simon obliged his brother by returning to the original topic of conversation, but his thoughts remained troubled by the reference to Tiger Jackson, Micah's expatriate air force buddy. At best, the man was a mercenary, at worst, a criminal in league with one of the most notorious and ruthless drug lords operating out of the Golden Triangleâthat remote
area of Southeast Asia where Thailand, Laos, and Burma meet. “At least she's agreed not to leave until after the rainy season. Maybe Mom can talk her into staying in the States until Christmas.”

Micah snorted. “How safe will she be at this camp? Most of them aren't more than a grenade throw away from the border.”

“This one's practically rear echelon. Twenty klicks or so from Laos.” Simon tried to smile but gave up the attempt. He leaned forward, his hands between his knees, twirling his glass as he talked. “We're working on getting these people someplace permanent to stay.” He'd been traveling openly for the government in the past six months, inspecting refugee facilities around the world, reporting back to his superiors, testifying before various congressional committees and doing his damnedest to get innocent victims of half a dozen warring nations a place to live, to belong, to call home. It was a far cry from the undercover work he'd been involved in for many years, less exciting and somewhat less dangerous, but more rewarding.

“You don't think we can change her mind, do you?”

“Carrie wants you to please give him his bottle. With any luck he'll fall asleep.” Leah cocked her head, straight, night-black hair falling over her shoulder, and examined the bright-eyed baby. “I don't think that's going to happen,” she observed with all the knowledge
and experience four years of baby-sitting had given her. “He looks like he's ready to party.”

Micah took the little boy who would soon be legally his son, accepted the bottle Leah held out to him and settled the infant in the crook of his arm. “Tell his mother I'll do my best.” Micah grinned at the pretty teenager, then looked down at the baby with great contentment.

“Don't forget to burp him when he's done. They always spit up on you if you don't, and that is so gross.”

“Don't I know it.” Micah held the bottle to his son's mouth, and the baby sucked contentedly. “Don't look at me like that,” he growled, catching Simon's amused eye on him.

“I think it's sweet,” Leah said dreamily. “Men holding babies are so sexy.” She drifted out of the room on a wave of perfume.

“Beware,” Simon said dryly. “They grow up and turn into teenagers.”

“Yeah.” Micah was suddenly serious once again. The old haunted look came back into his eyes. “I still don't think Rachel should be going back. Nam screwed us all up pretty good but Rachel most of all. And regardless of what your buddies at State tell you, we don't know for sure that this Father Dolph is on the up and up.”

“His full name is Dolph Hauer,” Simon said very quietly. “He's Father Pieter's nephew. I don't think there's anything in the world we could do to stop our sister from going to Thailand if she's doing it to honor the old man's memory.”

“No, you're probably right there.” Micah looked as
strong and unbending as the mighty oaks of his north country home, but his big, scarred hands were gentle as he resettled his son in his arms. “But there's one man over there I can trust to keep an eye on her.”