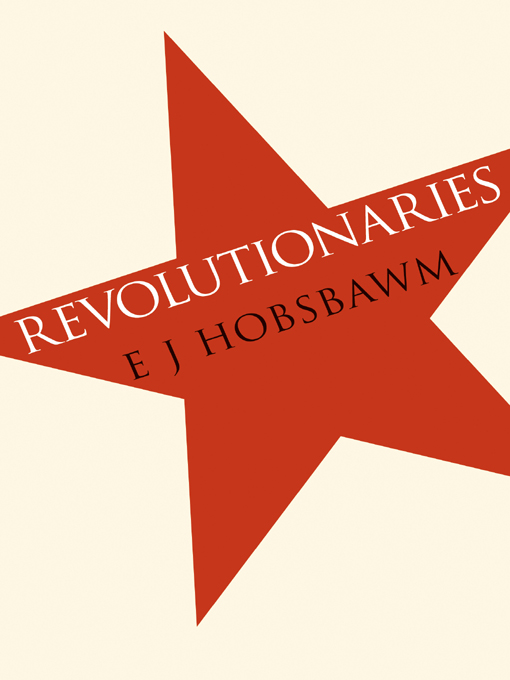 Eric Hobsbawm was born in Alexandria in 1917 and was educated in Vienna, Berlin, London and Cambridge. A Fellow of the British Academy and the American Academy of Arts and Sciences, with honorary degrees from universities in several countries, he taught until retirement at Birkbeck College, University of London, and since then at the New School for Social Research in New York.
Also by Eric Hobsbawm:
The Age of Revolution 1789â1848
The Age of Capital 1848â1875
The Age of Empire 1875â1914
The Age of Extremes 1914â1991
Primitive Rebels
Labouring Men
Industry and Empire
Bandits
Worlds of Labour
Nations and Nationalism Since 1780
On History
Uncommon People
The New Century
Globalisation, Democracy and Terrorism
Interesting Times: A Twentieth-Century Life
Revolutionaries
Eric Hobsbawm

2 Radicalism and Revolution in Britain

5 The Dark Years of Italian Communism

8 Bolshevism and the Anarchists

11 Intellectuals and the Spanish Civil War

13 The Dialogue on Marxism

14 Lenin and the âAristocracy of Labour'

16 The Principle of Hope

17 The Structure of Capital

19 Vietnam and the Dynamics of Guerrilla War

20 Civilians versus Military in Twentieth-Century Politics

23 The Rules of Violence

27 Intellectuals and the Class Struggle

This book consists of essays on a number of related subjects. The first part deals with the history of communism and communist parties, mainly in the period of the Communist International. The second part deals with anarchism, a movement in which interest has revived of late, the third part with various aspects of the international debate on Marx and marxism, which has been lively since the middle 1950s. It contains some footnotes to Marx and Lenin, but consists chiefly of comments on some rediscovered old and some new marxist writers, and on the debates to which they have given rise. Finally a number of topics are considered which can be loosely grouped under the heading of âviolent politics' â revolution, insurrection, guerrillas, coups d'Ã©tat and such like.

Writers choose some subjects and have others chosen for them. The great majority of those in this volume have been chosen for me, partly by those who invited me to give various lectures but mainly by editors who commissioned them in the form of book-review essays. No doubt they thought that a marxist of the âold Left' ought to know something about the subject-matter of the books they sent me and might be interested in expressing his views about them. The second assumption is evidently correct, but the first cannot be made without substantial qualifications. Over the years I have acquired some
knowledge both of marxist ideas and of the history of recent revolutions and revolutionary movements but, speaking as a historian, these are not fields in which I would claim professional expertise. Much of what I know comes from the authors reviewed here. Little is based on first-hand research. The most I can claim is to have kept my eyes open during the past decades as a modest participant, or what the anthropologists call a âparticipant observer', to have listened to friends in numerous countries who know a great deal more than I, and to have had at least a tourist's view of some of the activities with which these essays deal.

Still, first-hand observation ought to count for something. If the results of reflection upon it can be communicated, it may perhaps help those who have not lived through the era which formed my generation â the period during which the hopes and fears of revolutionaries were inseparable from the fortunes of the Russian revolution â to understand an important part of twentieth-century history. That is why I have tried to be as lucid as possible about the movements of that era. As for the more recent episodes discussed here, I have done my best to write about them realistically though not dispassionately. It is improbable that the lessons which may be drawn from such an analysis will be learned, but the least a historian can do is to provide material for education.

The object of these essays is not to add to an already vast literature of polemic and counter-polemic, accusation and justification. It is not even certain whether the questions which haunt middle-aged and elderly men and women who gave themselves â and others â to their cause, will strike their less committed contemporaries or their younger successors as equally important. Their object is to assist clarification and understanding. What the author's views are on the polemical issues discussed, should be clear. However, it would be a pity if interest in these papers were confined only to those who agree with them.

The dates of writing of the essays have been indicated. A small part of
chapter 5
first appeared as a review in the
Times Literary Supplement
, while
chapters 11
,
20
and
27
were given as lectures respectively at the University of Lausanne, in Montreal and in London. The rest of the chapters first appeared in English in the
Times Literary Supplement
, the
New York Review of Books
, the New York
Nation, New Statesman, New Left Review, Marxism Today, The Spokesman, Monthly Review, History and Theory
and
Architectural Design
.
Chapter 8
appeared in
Anarchici e Anarchia nel Mondo Contemporaneo
(Fondazione Luigi Einaudi, Turin, 1971). Minor changes have been made in almost all, but some have been more or less extensively rewritten. My thanks are due to the publishers for permission to reprint.

We are today at the end of that historical epoch in the development of socialism which began with the collapse of the Second International in 1914 and the victory of the bolsheviks in October 1917. This is therefore a suitable time to survey the history of the communist parties which were the characteristic and dominant forms of the revolutionary movement in this era. The task is difficult because communist party historiography has special complications, but also for wider reasons.

Each communist party was the child of the marriage of two ill-assorted partners, a national left and the October revolution. That marriage was based both on love and convenience. For anyone whose political memories go back no farther than Khruschev's denunciation of Stalin, or the Sino-Soviet split, it is almost impossible to conceive what the October revolution meant to those who are now middle-aged and old. It was the first proletarian revolution, the first regime in history to set about the construction of the socialist order, the proof both of the profundity of the contradictions of capitalism, which produced wars and slumps, and of the possibility â the
certainty
â that socialist revolution would succeed. It was the beginning of world revolution. It was the beginning of the new world. Only the naÃ¯ve believed that Russia was the workers' paradise, but even among the sophisticated it enjoyed the general indulgence which the
left of the 1960s now gives only to revolutionary regimes in some small countries, such as Cuba and Vietnam. At the same time the decision of revolutionaries in other countries to adopt the bolshevik model of organization, to subordinate themselves to a bolshevik international (i.e. eventually to the
CPSU
and Stalin), was due not only to natural enthusiasm, but also to the evident failure of all alternative forms of organization, strategy and tactics. Social democracy and anarcho-syndicalism had failed, while Lenin had succeeded. It seemed sensible to follow the recipe of success.

The element of rational calculation increasingly prevailed, after the ebbing of what had, in the years after 1917, looked like the tide of global revolution. It is, of course, almost impossible to separate it in practice from the passionate and total loyalty which individual communists felt to their cause, which was equated with their party, which in turn meant loyalty to the Communist International and the
USSR
(i.e. Stalin). Still, whatever their private feelings, it soon became clear that separation from the communist party, whether by expulsion or secession, meant an end to effective revolutionary activity. Bolshevism in the Comintern period did not produce schisms and heresies of practical importance, except in a few remote countries of small global significance, such as Ceylon. Those who left the party were forgotten or ineffective, unless they rejoined the âreformists' or went into some overtly âbourgeois' group, in which case they were no longer of interest to revolutionaries, or unless they wrote books which might or might not become influential on the left some thirty years later. The real history of Trotskyism as a political trend in the international communist movement is posthumous. The strongest among such exiled marxists worked quietly in isolation until times changed, the weakest broke under the strain and turned passionately anti-communist, to supply the
CIA
culture of the 1950s with several militants, the average retreated into the hard shell of sectarianism. The communist
movement was not effectively split. Still, it paid a price for its cohesion: a substantial, sometimes an enormous, turnover of members. The joke about the largest party being that of the ex-communists has a basis in fact.

The discovery that communists had little choice about their loyalty to Stalin and the
USSR
was first made â though perhaps only at the highest levels of the parties â in the middle 1920s. Clear-sighted and unusually strong-minded communist leaders like Palmiro Togliatti soon realized that they could not,
in the interest of their national movement
, afford to oppose whoever came out on top in the
CPSU
, and tried to explain this to those less in touch with the Moscow scene, such as Gramsci. (Of course even a total willingness to go along with Stalin was no guarantee of political, or for residents of the
USSR
physical, survival in the 1930s.) Under the circumstances loyalty to Moscow ceased to depend on approval of the Moscow line, but became an operational necessity. That most communists also tried to rationalize this by proving to themselves that Moscow was right at all times is another matter, though it is relevant to the argument, because it confirmed the clear-headed minority in the belief that they would never be able to take their parties with them against Moscow. A British communist who attended the meeting of the leadership in September 1939 which was told that the war was not, after all, supposed to be a people's anti-fascist war but just an imperialist one, recalls saying to himself: âThat's it. There's nothing to be done. An imperialist war it is.' He was right at the time. Nobody bucked Moscow successfully until Tito carried his party against Stalin in 1948 â to Stalin's and a lot of other party leaders' surprise. Still, he was by then not only a leader of a party but also of a nation and a state.