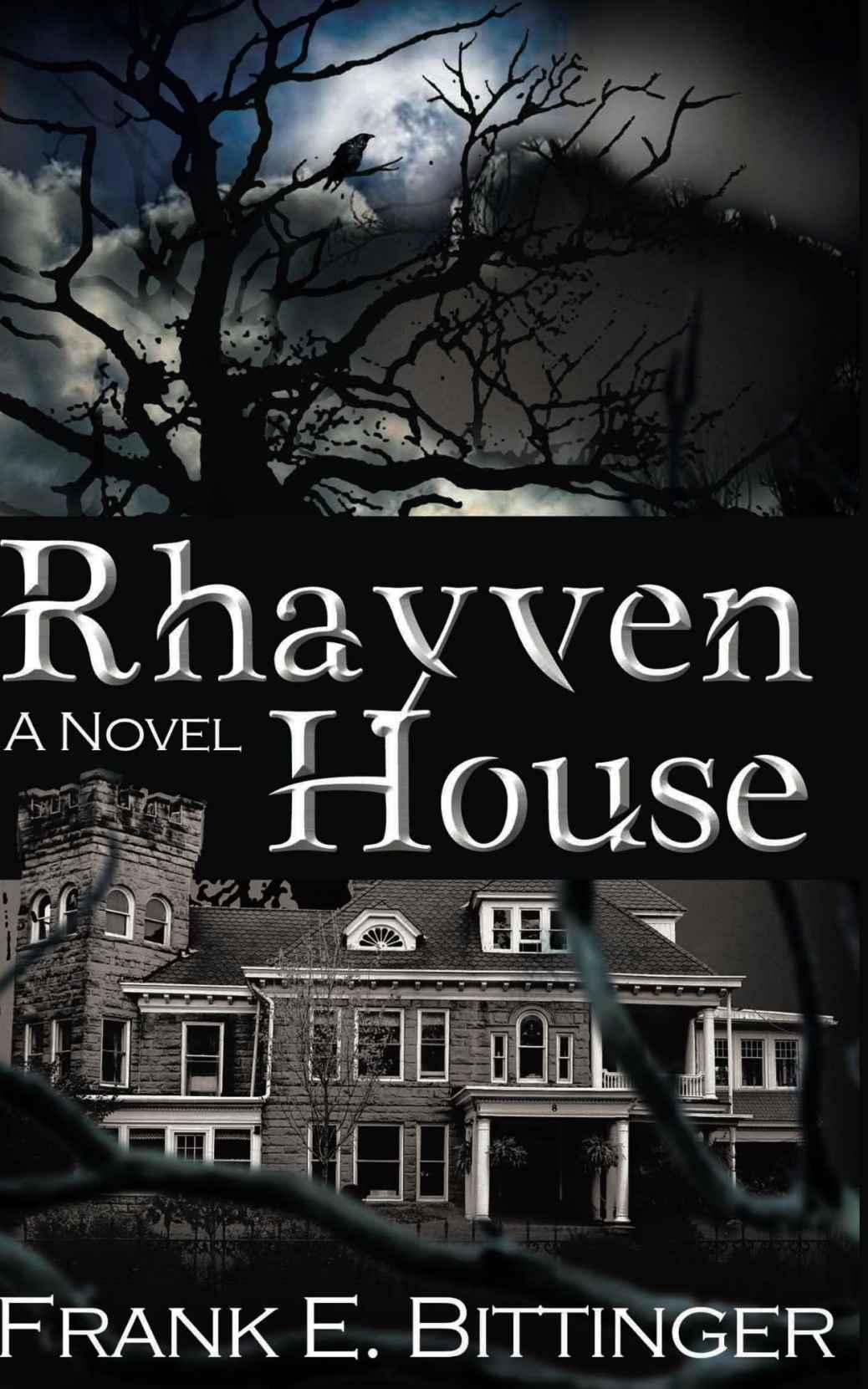 "You're beautiful and I will stab anyone who says otherwise."

Angels of the Mourning Light:

“...an interesting mix of shadowy horror and sunny humor with unpredictable twists and turns. Frank E. Bittinger's unique style will draw you in, entertain and raise the hair on the back of your neck."
—Christina Moss, Author of
Vampire of My Dreams

Lead Me Into Temptation
story
from
Sinister Landscapes
:

"Bittinger created a story that is deep and compelling. The characters are intense and as real as it gets. I couldn't put this book down."

—Mark Miner; Author of
The Home

“If HGTV’s
Fixer Upper
merged with SyFy’s
Ghost Hunters
, it wouldn’t be nearly as good as
Rhayven House
! Readers will love the chills (including an inexplicably icy doorknob), the surprises, the uncovering of secrets, and the hero, Ian. It's a touch of
Grand Guignol.
To paraphrase Poe, 'Quoth the raven—buy this book!'”

This is a work of fiction from the author. Names, places, characters, and the story within are either from the author’s imagination or used in a fictitious manner. Any resemblance to anything/anyone is unintentional and coincidental.

No part of this book may be used or reproduced by any means, graphic, electronic, or mechanical, including photocopying, recording, taping or by any information storage retrieval system
without the written permission of the publisher.

of all the animals

who never knew love or kindness—

may you be blessed and at peace.

For the people who work so hard to help the animals—

keep up the good work; bless you.

To my baby girl Chiffon, who loved her peanuts and held my hand when she wanted her head scratched.

To the memory of my little girl Mango who always said “Hello” and did her fancy little bow.

To Jeanean Beachy for helping me try.

And last, but not least:

For all those military and law enforcement personnel

—past, present, and future—

who work so hard to make the world safe

and to protect me.

with shades of the dead.

someone must not be remembered.

sexual attraction to and/or sexual interaction

Into the Mirror Black

Angels of the Seventh Dawn

Angels of the Mourning Light

(story
Lead Me Into Temptation
)

As Dark As I

Shadows Amongst the Moonlight

Memory in a Dream

He struck the match and it ignited with a crack that sounded nearly as loud as the thunder outside. The bitter smell of phosphorous filled the air and he could taste it on his tongue when he swallowed.

Quickly he lit the old lamp, taking off the glass chimney and holding the matchstick to the wick before the match either sputtered out or burned his fingers and made him drop it.

The flame danced, reaching real high, and throwing light across the room before he turned it down. It cast just enough light for him to see by. He put the chimney back on. Looking up at the window, he saw nothing but his own reflection. His grandmother hadn't drawn the drapes when she'd put him to bed. The darkness outside and the lamp inside had combined to turn the glass panes into mirrors.  He gave his image a big grin before turning away.

A flash of lightning made him jump and he steeled himself for the accompanying rumble of thunder, hoping it wouldn't be too loud. That meant the lightning had crashed close by.

Moving away from the window, he made his way slowly to the bathroom, carrying the glass lamp as carefully as he could. The storm had knocked out the power and he hadn't been able to find the flashlight his grandmother had placed on the nightstand when she'd tucked him in earlier. If he'd been at his house, he could've found his way to the bathroom in the dark, but his mom and dad had brought him over to his grandmother's house like they always did when there was a bad storm.

Maybe they believed the trailer they lived in, which had a metal shell, would attract the lightning. Besides, they wanted him to be somewhere safe just in case. So every time the forecast called for a bad storm, they bundled him up and brought him to his grandmother's house.

He knew she kept an oil lamp and matches in each of the four rooms of her old block house, not counting the little bathroom. He'd quietly crept out of bed and fumbled around in the top dresser drawer until he'd found the stick matches.

It never dawned on him he should have called out for his grandmother instead of getting the matches and lighting the lamp. Seven was old enough to start acting like a big boy, and big boys didn't need anybody to take them to the bathroom.

Not even in the dark.

The heavy wood door to his bedroom was already open so he didn't have to worry about balancing the lamp and opening the door. He could easily walk right into the living room. Being quiet because he didn't want to wake his grandmother, not after he realized she might get real mad because he'd used the matches to light the lamp, he walked.

Stopping in the doorway between the living room and the kitchen, he listened to the rain coming down outside. What if he saw the white-haired man again? He remembered seeing the man several times before when he was little, but he hadn't seen him in a while.

One night when he was almost five, his parents and grandmother sat down with him and showed him old family photo albums, asking him to pick out the white-haired man if he saw him. He was able to pick the man with the white hair out readily enough.

The man was his grandmother's husband, his dad's dad, or so his parents told him. The grandfather who had died six months after his grandson was born.

He'd been too young to remember him, too young for his mind to conjure up images of a dead grandfather. No, the white-haired man had been real each time he'd appeared.

Maybe he should go back to his room, put the lamp back, blow it out, and then call for his grandmother. But he really had to go and by the time he did all that, it might be too late. The only thing worse than getting yelled at by his grandmother would be her knowing he wet the bed.

Across the kitchen was the bathroom. He'd put the lamp on the sink, pee, and get back to his room. It would only take a couple minutes.

Lightning flashed outside, lighting up the kitchen. It was soon followed by the rumbling. He swore he felt the floor move beneath his feet. The sound of the rain really made him have to go. Real bad.

“
Don't you be here, white-haired man,”
he briefly squeezed his eyes shut and whispered.

Steeling himself once more against the storm and against the thought of the white-haired man, he put one foot in front of the other and counted his steps across the kitchen. Casting a glance at his grandmother's bedroom, he saw she'd left the door open, so he had to make sure he was quiet enough not to wake her. After what felt like an eternity, he finally made it to the bathroom.

Gently, he set the lamp on the sink, making sure it was far enough from the edge so it wouldn't accidentally fall off. The glass against the old porcelain sink made a slight ringing and he winced, hoping the sound wouldn't be enough to wake his grandmother. Then he turned to stand in front of the toilet. He couldn't wait any longer. Lifting the toilet seat with one hand, he pulled his pajama pants down with the other.

The flickering flame cast odd little shadows on the walls and after making sure his aim was true, he closed his eyes. Relief came instantly; it was so great his flesh broke out in goose bumps. He nearly audibly sighed.

Then, he felt a hand on his shoulder...