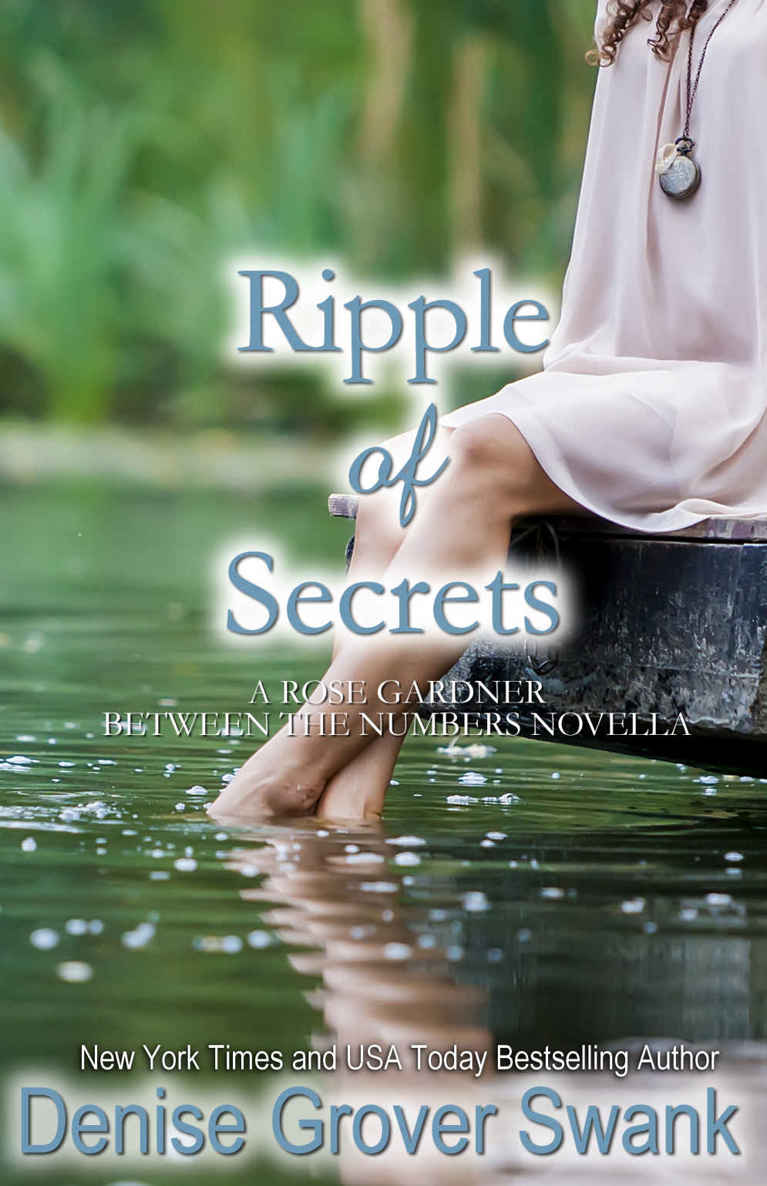 A Rose Gardner Between the Numbers Novella

Between Thirty-Three and Thirty-Four

Ripple of Secrets was originally released in three parts on the Denise Grover Swank website. It was available as a free read to newsletter subscribers from January 29 to March 16, 2015.

This book is a work of fiction. References to real people, events, establishments, organizations, or locations are intended only to provide a sense of authenticity, and are used fictitiously. All other characters, and all incidents and dialogue, are drawn from the author
’
s imagination and are not to be construed as real.

Part One
Chapter One

My parents’ house was the last place I wanted to be on Christmas Day.

Coming home for just the day had become a tradition after I started law school in Little Rock. It fulfilled my family obligation without forcing me to spend any more time with my parents than necessary. Even before my entire life fell apart back in September, I’d hoped to get out of going to my parents’ house for Christmas. Only I’d hoped to be spending Christmas with Rose, planning our wedding and our family, our life together. Now my future seemed as barren as the gray day outside my car.

As I drove through the open gate, I considered pulling around the circular drive and taking off, but I knew it was just a fantasy. Still, I was grateful to find the brick-paved drive surprisingly empty. My parents usually threw elaborate Christmas parties. They must have still been too humiliated by my state senate loss to host one this year. Especially one I would be attending.

I parked close to the front door, then gripped the steering wheel and took a deep breath as I stared at the massive brick and stone house. Thank God for my sheriff patrol shift later. I’d volunteered to fill in for one of the deputies with a family so he could spend the entire day with his kids. I would have pulled a double shift if I could have gotten away with it, but my father had made some vague threat about “that Fenton County tart” and I’d mumbled that I’d figure out a way to come.

Rose and I might not be together, but I would gladly spend the rest of my life keeping her safe, whether she knew it or not. It was my penance for failing her.

A lump filled my throat, catching me by surprise. My good days outnumbered my bad ones lately, but the holidays had been rough. I’d purposely tried to avoid Rose over the last week, a difficult task given the fact that we were now business partners. But that was no one’s fault but my own. My last-ditch effort to keep her in my life. While I’d gone into it knowing her initial outrage would soften, I’d hoped her resistance to taking me back would fade as well. But her relationship with Mason seemed stronger than ever, especially after Mason’s brush with death in the fire at that strip club Gems. It was all I could do to block out the mental image of the two of them celebrating Christmas at Rose’s farmhouse.

That was supposed to be me.

But it was time to suck it up and accept the situation. At least for now. I still held out hope. Things changed. The crash course of our relationship was proof enough of that. Rose had told me she wanted safe instead of risky for now. She had been talking about the business, of course, but the look in her eyes had given me hope that her words might hold a double meaning. I’d bide my time. Rose was worth waiting for.

I squared my shoulders and climbed out of the car, grateful the forecasted rain had held off and the sun was peeking through the clouds. It bolstered my resolve as I knocked on the front door and waited. My parents’ butler, Gerald, opened the door moments later, a grim look on his face.

“Cheer up, Gerald,” I said, brushing past him as I walked through the door. “It’s Christmas and my parents don’t seem to be having their usual boisterous party.”

Gerald’s only response was to close the door behind me. He’d worked for my parents for nearly twenty years and truth be told, I couldn’t remember Gerald ever looking happy. But then again, look where he worked.

The entryway was covered with Christmas decorations. Real evergreen garland was wrapped around the staircase railing, as well as an elaborate holiday arrangement on the mahogany credenza. The image was worthy of a magazine layout. In fact, it had probably been featured in one. My parents were known for their multiple holiday parties and my mother hired a decorator every year. It took the decorator days to make the house visually ready for Christmas. But no matter how perfect it looked, there was always something missing—something only I seemed to notice. Heart and love. The setting was as soulless as it was beautiful.

Just like the woman who claimed to be carrying my child.

My parents were already sitting in the living room. My mother was dressed to impress in a cream-colored suit that blended in strategically with the off-white sofa, sipping a mimosa from a champagne flute. Dad was in an overstuffed chair, drinking coffee while reading a newspaper.

Mom noticed me first, her gaze lifting to my face. A soft smile lifted her mouth and I had a hard time figuring out if it was genuine or if she thought it was expected of her. Maybe both.

She kicked into hostess mode, even if it was only a party of three. “Joe, how lovely for you to join us.”

I considered adding that I hadn’t had a choice in the matter, but we all knew it and I would come across as a sulking child. “Merry Christmas, Mom.” I tried hard to keep the sarcasm from my voice.

Dad barely glanced up at me. “Joseph.”

I was tempted to pay a visit to the wet bar in the corner, but I’d done a lot of soul-searching lately, and I realized I’d used alcohol as a crutch for too long. Instead, I sat on the opposite end of the sofa from my mother. It occurred to me that while it was a relief my parents hadn’t included their usual guests, it also meant there was no one else present to distract them.

“How’s your new job?” Mom asked, the disgust in her voice only partially veiled.

“It’s going great, thanks for asking.” The sarcasm in my own voice was far more obvious.

“Are you really moving to that
farm?
” The way she said ‘farm’ made it sound like I was moving to third-world Africa.

Her upper lip curled. “I don’t understand why you don’t move in with Hilary. She’s leased such a lovely house, a rare find in that dump of a town.”

“For the hundredth time, I’m not moving in with Hilary. And I’m definitely not marrying her.”

My father looked up, as if finally taking notice of our conversation. “You will not make that child a bastard, Joseph.”

My hand balled into a fist. “This is the twenty-first century, Dad.”

He set his paper down in his lap and narrowed his eyes. “That child will be a Simmons. I will see to it.”

“J.R.,” an all-too-familiar voice cooed from across the room. “No need for threats.”

My chest tightened as I glanced at the woman in the doorway. “You invited Hilary?”

She stood in the threshold wearing a gray linen skirt paired with a white silk blouse that revealed her growing cleavage, but she’d dressed down the outfit with two-inch heels instead of her usual three or four. Her long red hair was loose today and her makeup was understated. Hilary was a beautiful woman and she knew it. In fact, she relied on it. This morning it was obvious she was going for a Christmas casual look, only it looked plastic on her. I couldn’t help but wonder what Rose was wearing.

“Of course we invited Hilary,” Mom said as though I’d asked the stupidest question in the world. “She’s the mother of your child. She’ll be with us
every
Christmas.”

My father’s eyes found mine and his jaw clenched. “Our grandchildren will spend Christmas at
our
house every year.”

If Rose and I ever had children together, I would sooner throw myself on a grenade than bring them here. Why was I so apathetic about the child Hilary was carrying? I might not like the baby’s mother, but he or she would still be mine. I needed to accept that and do my level best to protect him or her from these narcissists.

“
Of course
our baby will spend Christmas here,” Hilary said, moving to the wet bar. “Don’t be ridiculous.” She poured herself a glass of orange juice and sat down on the sofa between my mother and me.

I expected her to put her hand on my knee or drape herself against my arm, but she kept her body parts to herself, unlike her usual modus operandi. Hilary had used sex as a way to sway me since we were teenagers. So she was changing tactics. Again. Whatever her plan, she took a sip of her juice and turned to my mother. “My parents called and said they were going to be a few minutes late.”

I wasn’t surprised to hear that her parents were coming too. This was probably all planned weeks ago. The five of them would gang up on me and try to wear me down. I glanced at the grandfather clock in the entryway. Five minutes down. Three hours and fifty-five minutes to go.

“Hilary, dear, how have you been feeling?” Mom asked her with more warmth than she’d used for me.

“Surprisingly well. Very little morning sickness.” She paused for dramatic effect and gave my mother a soft smile. “I’m just exhausted all the time.” She released a pretty laugh. “I find myself falling asleep at
ridiculous
times. Just this Wednesday I fell asleep at eight o’clock, if you’d believe it.”

My mother grabbed her hand. “You should come back home, Hilary. Let your mother and me take care of you.”