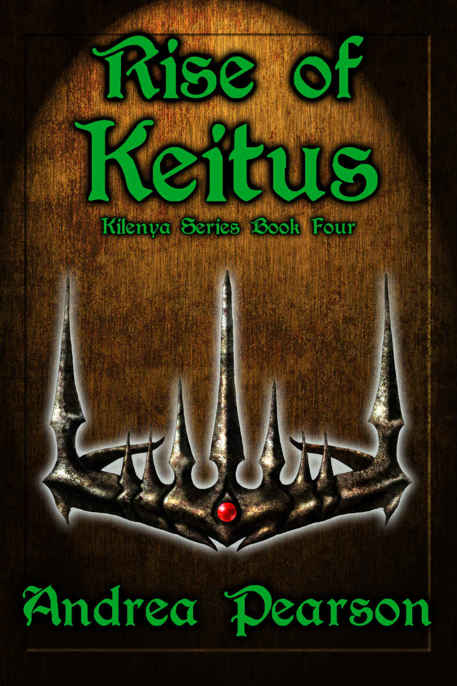 Chapter Fifteen: A Way In

Chapter Twenty: Is It Possible?

The Key of Kilenya: Special Edition with Illustrations

Grail Bestiary Volume I: Creatures of Grail and Kilenya

Praxis Bundle One: The Focus, The Manor, The Angel

For information on the above books, click
here
. (http://www.andreapearsonbooks.com/p/my-books.html)

This book is available in print at most online retailers.

This ebook is licensed for your personal enjoyment only. This ebook may not be re-sold or given away to other people. If you would like to share this book with another person, please purchase an additional copy for each recipient. If you're reading this book and did not purchase it, or it was not purchased for your use only, then please return it and purchase your own copy. Thank you for respecting the hard work of this author.

This is a work of fiction, and the views expressed herein are the sole responsibility of the author. Likewise, characters, places, and incidents are either the product of the author's imagination or are represented fictitiously, and any resemblance to actual persons, living or dead, or actual events or locales, is entirely coincidental.

Summary
: Jacob Clark's fantasy adventure has reached its most dangerous phase yet. A swarm of blood-ridden insects overwhelms Taga Village—threatening the existence of the Makalos—and the secret regarding Akeno’s strengths is about to be revealed. Not only that, but Jacob’s newly honed abilities allow him to discover the origin of the evil Lorkon. But finding out may be his deadliest mission yet.

Join Jacob and his friends in this fourth installment in the Kilenya Series as they strive to prevent the Lorkon disease from destroying Eklaron and Earth.

To Tristi Pinkston and Jenni James

Thank you for your friendship and for always motivating and uplifting me. May the words freely flow as you write your next masterpiece! :-)

Jacob pulled the Key of Kilenya out of his pocket and looked at his dad and then his brother, Matt. “You guys ready?”

“Yeah! Let’s go save some Wurbies!” Matt’s characteristic color of bright green for excitement flooded the air around him. He grinned at Jacob.

“Calm down,” Dad said, laying his hand on Matt’s shoulder. “You need to understand the seriousness of what we’re about to do. Gallus said the only reason the Wurbies are ready so soon—”

“Like, three weeks after Jacob met with them? Yeah, that’s soon.”

Dad glowered at Matt. “Shhh. They’re only ready because the Ashay Hills have become overrun with Lorkon spies. Wurbies are getting murdered, and all of them are moving to Taga Village.”

“Wow. Things must be really insane out there,” Jacob said. Especially since Dad—Dmitri, King of Gevkan—was going. This was the first time he would be appearing as the leader of the war-ravaged and suppressed people.

Dad waited a moment longer, making sure Matt was sufficiently calmed, then motioned for Jacob to go ahead. Jacob lifted the Key, which was attached to his belt loop with an extra-thick chain so it couldn’t get lost again, and put it in the lock of their front door.

“Gallus’s shop in Macaria,” Jacob said, turning the Key to the left and creating a link between his home on Earth and Eklaron. He pushed the door open and peered into the shop. It was dark inside. The sun had already set, and there were no lights lit.

“Hello?” he called softly before entering the room.

Dad strode around Jacob into the room, seemingly following Gallus’s voice. “So you
do
expect trouble, then?”

Gallus sighed. “Yes. It’s been a stressful few days since returning from August Fortress. The Lorkon have placed spies everywhere, and we’ve all felt the pressure.”

He lit a candle, showing he was totally decked out in hardened leather armor with aggressive-looking decorations and designs imprinted in it. Jacob raised his eyebrow. The black man really wasn’t kidding. Too bad Jacob, Dad, and Matt wouldn’t be wearing something like
that
. Jacob looked down at his black hoodie and dark jeans. He’d just have to rely on his powers to protect him.

“The Wurbies have been arriving in trickles through the castle tunnels over the last couple of days. I’ve situated them throughout the city with friends. Once we leave the shop, we must hurry—the Lorkon will be sending someone to stop us.” He looked at Dad. “If things get sticky, Jacob will return you to Mendon immediately—we can’t risk your life. But you already know how I feel about that.”

“Where do I take the Wurbies?” Jacob asked, already knowing he’d be the one to do that since the Key only worked for him.

“Brojan says they’ll be safest if you take them to the tree first—he and the others will make sure they get where they need to go after.” Gallus adjusted his armor, using the light of the candle to make sure the leather straps were tight. “I’ll lead you from home to home.” He then motioned to Matt and Dad. “You two follow behind.”

“Wait a second,” Matt said. “Why don’t we just have Jacob Key us around?”

Gallus stared at him for a moment before responding. The expression on his face showed he felt Matt should already know the answer. “Because you’re on my turf, and I’m not comfortable with walking blindly into situations. You never know what you’ll find, and a simple inspection of the exterior of a building may tell you a great deal about the interior. For all we know, one of the places could be a trap for us.”

He undid several latches then grabbed the knob. “Ready?” When the others nodded, he blew out the candle and pulled the door open. “Follow me. Quickly, quietly.”

Jacob’s eyes took a moment to adjust to the darkness. The sky was full of stars, illuminating the white buildings across the street. Gallus pointed to the left and raced that way, surprisingly quiet for a man his size. Jacob dashed after him, listening to the soft sound of footsteps behind him as Dad and Matt followed.

Gallus paused at the building next to his shop and knocked softly. His wife, Bezza, opened, and the colors surrounding her changed quickly from fear—yellow-orange—to a green-blue, representing relief. Jacob never tired of watching this sort of transformation. It was amazing how quickly the colors altered.

Bezza ushered everyone in, and as soon as Jacob stepped over the threshold, a small object in bright blue collided with his legs. It took him a second to recognize that the three-foot-tall creature was a Wurby.

Fubble, leader of the Wurbies, stepped back, shaking his head. “No, no.” He put his hand on his chest. “Fubble
the Wurby
.”

“Eeep!” Fubble’s hands turned into a blanket and covered his head, causing the adults to chuckle—except for Gallus, who maintained a serious expression.

“No time to get reacquainted,” he said. “Fubble the Wurby, we need to get you to safety as soon as possible.”

Fubble dropped the blanket, his hands returning to normal, a serious expression on his face. “I go with Jacob. Tast and Pug,” he motioned to a female Wurby holding a baby, “go to Taga Village with rest. I take care of Wurbies.”

Jacob was surprised that Fubble hadn’t reacted to Dad’s presence—Dad was the actual king of Gevkan. The way Fubble treated Jacob, who was only a prince, was way over the top.

Fubble motioned for the woman to step forward. “You be safest with Makalos.”

Tast kissed Fubble on the cheek. “We is fine. You is be okay, okay?”

“I is be okay.” Fubble searched the room, then pointed at several other Wurbies huddled in a corner. “Come. Now.”

Jacob opened a link to the tree in Taga Village and held the door open for Tast and the other Wurbies. He looked into the empty, dark interior of the tree and back at Gallus. “We’re okay to send them? No one is waiting.”

“Yes. And either way, the Wurbies will be fine. With the entrance to Taga Village sealed, nothing can touch them.”

Jacob glanced down, nodding. He nearly freaked out when he saw a bug that looked like a large earwig with wings on his hoodie. Disgusting—he hated earwigs. He flicked it off and tried to conceal the shudder of revulsion that ran over him.

Bezza noticed, though. “Move aside.” She picked up a broom and started whacking the insect repeatedly. “I hate these things!”

Gallus grabbed her arm, stopping her. “You already know that does no good—they don’t die.” He glanced at the others. “We’ve been seeing these bugs everywhere lately. Not sure where they come from. Their larvae are especially vicious. They ate all Bezza’s house plants.”

Bezza swept the bug through the open doorway. “I won’t have them in my home!”

Gallus shook his head. “Better not send them to Taga Village, though.” He grabbed a piece of cloth, picked up the bug from the floor of the tree, shut the door—closing the link—then reopened the door and threw the bug onto the street in Macaria.

He pulled his wife close, tucking a strand of dark hair behind her ear. Then he kissed her and bade her farewell. She picked up their youngest child and watched as Gallus stepped out and looked both ways, crouched over. The man nodded, then ran, waving for the others to follow.

Jacob dashed through the door, rushing to catch up with Gallus. At the next building, Gallus knocked and was allowed to enter by a black man with a really long gray beard.

Fubble took over once inside, surprising Jacob. He instructed one of the Wurbies to stay in Macaria to help, then told the rest to leave through the link Jacob created to Taga Village.

The next several stops were similar to the first: A human opened the door, Jacob Keyed several Wurbies to the tree in Taga, and Fubble asked one Wurby to stay behind.

Gallus objected at first, but Fubble looked at him sternly. “They is warriors. Prepared to fight. They protect.”

A while after they started Keying Wurbies to Taga, the stars and moon disappeared, covered with thick clouds. The wind picked up, and Jacob pulled his jacket tighter. The weather had been mild so far, but December was still chilly.

Jacob didn’t think anything of the storm until he noticed Gallus staring up at the sky, fear flashing across his face, mirrored by the lightning streaking through the clouds.

“Lirone. It’s apparent the Lorkon aren’t happy about what we’re doing—they haven’t sent their sky monster to Macaria in several years.” He ran forward. “We must hurry. It doesn’t take long for Lirone to ready himself. He’ll attack quickly.”

Love Her Right by Christina Ow
Marlborough by Richard Holmes
Baby My Baby (A Ranching Family) by Pade, Victoria
Thanksgiving by Michael Dibdin
The Winged Serpent (The Order of the Oath) by Aidan, Nadia
Gift Horse by Dandi Daley Mackall
Hunter by Huggins, James Byron
Capital Bride by Cynthia Woolf
Exploited (The Dark Redemption Series) by Lane Hart
From The Wreckage - Complete by Michele G Miller