Read Rise of the Fey Online

Rise of the Fey 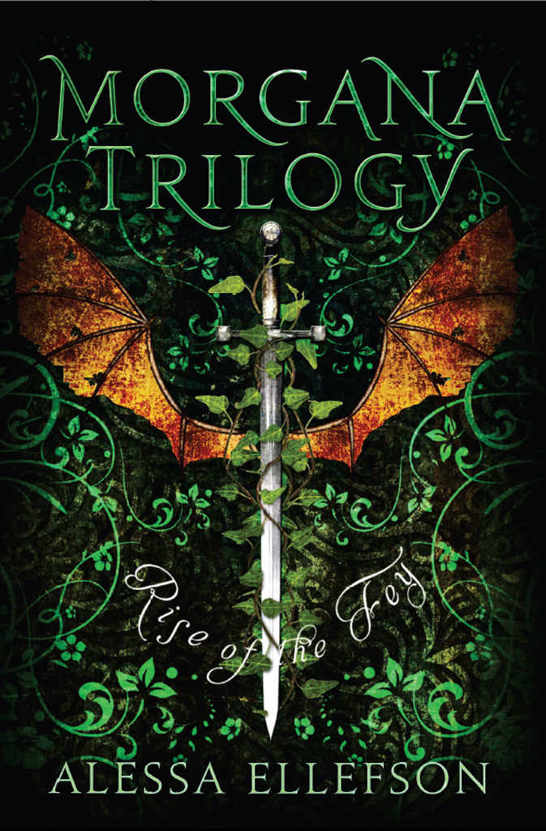 This book is a work of fiction. Any references to historical events, real people, or real locales are used fictitiously. Other names, characters, places, and incidents are the product of the author’s imagination, and any resemblance to actual events or locales or persons, living or dead, is entirely coincidental.

Copyright © 2015 by Alessa Ellefson
All rights reserved, including the right of reproduction in whole or in part in any form.

Sequel to: Blood of the Fey.

The first book in the Morgana Trilogy:

Blood of the Fey

Let no one deceive you in any way… For that day will not come, unless the rebellion comes first, and the man of lawlessness is revealed, the son of destruction, who opposes and exalts himself against every so-called god or object of worship, so that he takes his seat in the temple of God, proclaiming himself to be God…

“Dear Lord, I am heartily sorry for having offended thee, and I detest all my sins because of Thy just punishment, but most of all because I have offended Thee my Lord, Who is all good and deserving of my love.

“Though frankly, between you and me, I don’t see how I could be blamed for what my parents have done. Come to think of it, you do have a tendency to hold grudges, or you wouldn’t have punished all of mankind because Adam and Eve happened to disobey you that one time…

“So let’s strike a deal: If you’re willing to discard my past, I’ll be more than glad to overlook yours. And I promise to be really, really good from now on. After I’ve made Arthur pay for being a lying, scheming, good-for-nothing prat, that is. Thank you. Amen.”

I sign myself then let out a heavy breath as I slump back down onto the freezing floor.

“Psha!” a voice utters in the darkness, making me jump. “That ain’t gonna make a slick of a difference. He hasn’t listened
to the Watchers’ endless mumblings for millennia. A minute of your whiny self isn’t gonna make a ripple in the Almighty’s conscience.”

“W-Who are you?” I ask, my voice shaking. I didn’t see anyone else in the split second it took for Irene to throw me in jail. “Are you a…a ghost?”

My eyes dart about uselessly. Half-Fey or not, I still can’t see without light. I hear someone expectorate and wince as a fat, wet glob lands on my arm.

“There’s no such thing as ghosts,” the disembodied voice says. “And I’m hurt you wouldn’t remember me. We had such a lovely time together—hoppy beer followed by a romantic boat ride on the lake. It was great till your brother cut me up and you disfigured me.”

I cringe away from the venomous tone. There’s only one who would fit that description, and it happens to be the only Fey in the world who has every right to rip my heart out.

“In the flesh,” the clurichaun says, “or what’s left of it.”

He shifts around and I hear the sound of clinking chains. I let myself relax a little—at least he can’t attack me in here.

“Say,” Nibs says, “you wouldn’t happen to have some aqua vita
1
on you by any chance?”

A long stretch of awkward silence settles between us, punctuated by the occasional dry cough.

“That jerk isn’t my brother, you know,” I finally say, feeling my breath steaming in the air. “Arthur’s a traitor. He lied to me, manipulated me, tried to—”

“Who cares what he is?” Nibs cuts me off. “He ought to be skinned alive.”

“Couldn’t agree with you more on that one,” I say.

“You too, for that matter,” Nibs adds.

“Right,” I say, my discomfort spiking again. “So how long have you been in here for?”

His restraints scrape softly against the wall as he shrugs. “Days, months, years? Does it really matter? I’m probably going to be stuck in here for the rest of my eternal life. Unless…”

“Unless?” I ask, my ears perking up. Could it be he knows a way to get out or here, or someone who might help us escape?

“Unless your fake brother finds my last ogham and affixes me to one of his noisome devices,” Nibs says. “Or kills me outright.”

“Your other ogham?” I ask stupidly. “I thought you guys only had one.”

“Some of us can split our oghams,” Nibs retorts nasally as if he’s digging his nostrils for boogers. “Though it hasn’t done much for me except prolong the torture.”

“Oh.” I let my chin fall back onto my chest in disappointment. If a full-blooded Fey can’t get out of here, I have no hope of making it out alive either.

I think back to my last moments of freedom, a few hours ago. Despite all my warnings, Carman, the wickedest witch of the west, is back from the dead to wreak havoc all over the globe in her frenzy for vengeance.

And after meeting her, being locked away down here might not be such a bad thing after all. It’s not like we parted on friendly terms her and I, considering I’m somewhat responsible for her son’s death, and may or may not have thwarted her attempt to kill Arthur and Lance. I wonder if she’ll believe me if I tell her that last one was a mistake I’m not likely to make again? Probably not.

Might as well make myself comfortable in this damp, cold, smelly, dirty tomb of mine….

I sit up suddenly, my stomach spasming.

“Don’t worry,” Nibs says, matter-of-fact. “Any bug you may have felt crawling on you is just a trick of your imagination.”

I crouch against the wall, all muscles tense, forcing myself to breathe through my nose.

“Seriously,” Nibs adds, more alert. “This place is as good as airtight—anything that tries to crawl in or out without going through the door the proper way gets zapped.”

Tears spring to my eyes with the effort of self-restraint. I whimper. “I-I have to pee,” I breathe, biting on my lower lip as the full extent of being left to rot in this cell finally hits me.

I stop yelling, my breath coming out in rough gasps, my fists laying useless at my sides, stinging from having beat on the iron door for hours.

This is worse than being locked up in the prayer room by Sister Marie-Clémence; worse than my week stuck inside Irene’s house.

I sigh, looking sightlessly at my hands. “You’d think being Fey would be useful,” I say bitterly. “Like allow me to open doors or something.”

Nibs spits loudly and I hear a fat glob of phlegm hit the wall inches from me. “You’re dumber than I remember. This place is lined with iron, no Fey can get out.”

Nibs chuckles. “With you too now, though you’re lucky your human blood prevents you from feeling any pain at its touch.”

I slump back down as the last embers of hope die out inside me, leaving a black hole in their stead—Jesus’s agony in the Garden of Gethsemane was nothing compared to this.

“My soul is overwhelmed with sorrow to the point of death,” I mutter, remembering the verses from the Bible that Sister Marie-Clémence liked to recite whenever she was exasperated, which had been a daily occurrence with me. If only she could see me now. I sigh. “I’m going to die and I don’t even know a thing about my real parents.”

“Could you please stop with all the moping and whining?” Nibs asks. “It’s already bad enough that I have to stay chained to this wall for the foreseeable future.”

“Saint George’s balls!” I say, irritated. “Why can’t you just let me pray in peace?”

Nibs lets out a disgusted snort. “You should pray to Carman instead. The sooner she gets her ass here, the sooner she can kill all those knights off and free us.”

I shudder at the demon witch’s mention. If Carman comes over, then my death is going to come sooner rather than later. Besides, why would she bother coming to this rat hole when she’s got a whole world to conquer? Unless Nibs knows something I don’t….

Before I know it, I’m back on my feet, heading for Nibs when I trip over his chain and fall, smacking my head against the wall.

Nibs’s laugh rings out just inches from me. “Why so worked up?” he asks. “Think about it. The knights are the ones who put you down. And what for? Did you do anything to hurt them? No. Though between you and me if they hadn’t been so brainless themselves they would’ve locked you in here sooner. They would’ve prevented this mess, not that I’m complaining since—”

“Shhh!” I say, accidentally slapping him in the face.

He snarls and I snatch my hand away.

“I think I heard something,” I whisper.

“Doubtful,” Nibs says, “very doubtful. This place is about a hundred feet below ground, so unless—”

But he shuts up when a keening howl pierces our cell’s walls. The hairs at the back of my neck stand up. Despite it being muffled, I would recognize that sound anywhere.