Read Rise of the Firebird Online

Rise of the Firebird 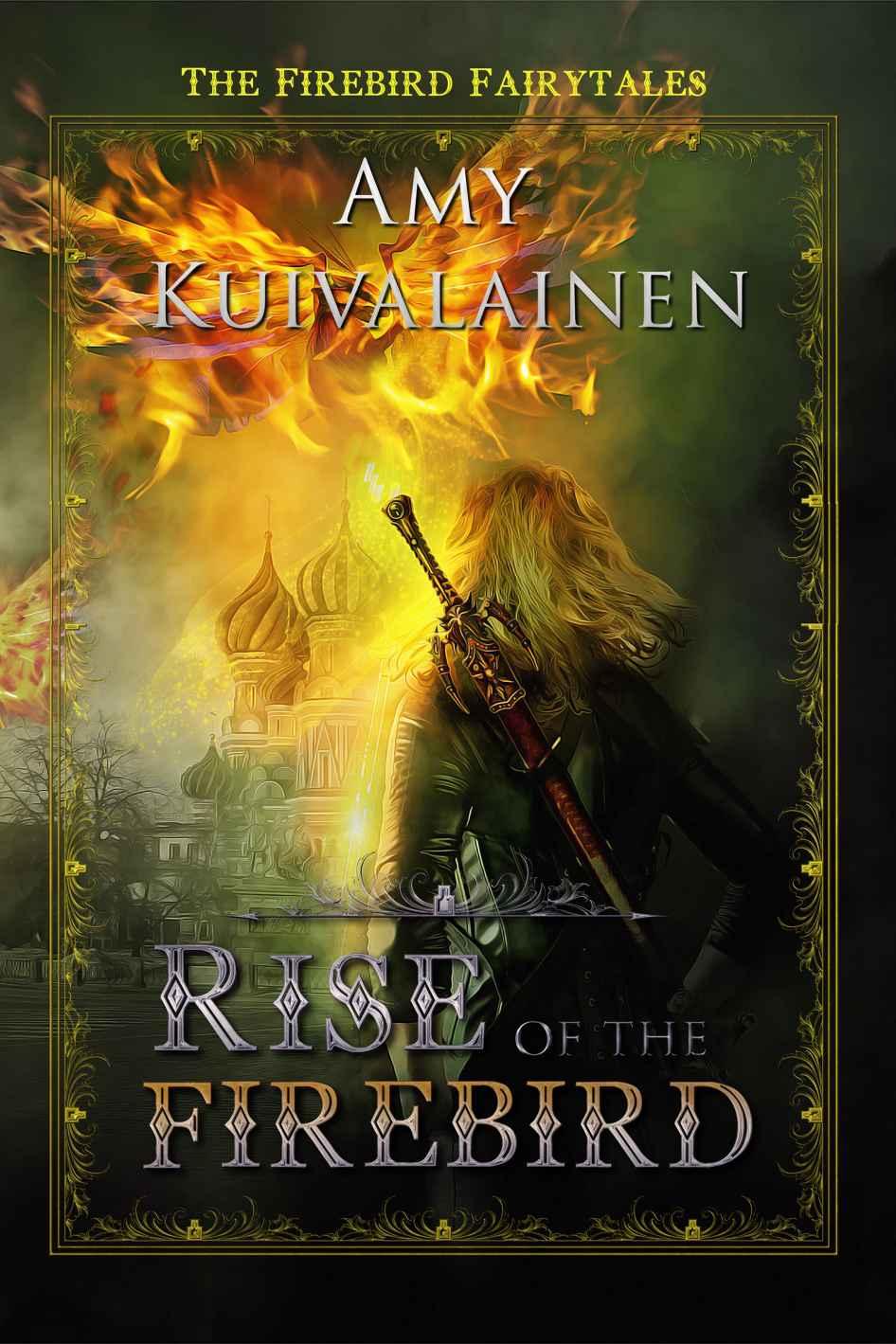 “…the story incorporates a fair share of surprises, and never fails to provide new scenes featuring bloodshed and strange new creatures…The beasts, in particular, help this story to move beyond the genre’s many clichés, and their complexity extends well beyond typical fantasy creatures. Fantasy fans will likely enjoy Anya’s adventures, which feature novel supernatural elements in a modern setting.”

“A series that promises a fresh twist on the world’s mythologies and folklore. Kuivalainen immerses her tale in the fantastic - a fact that will no doubt thrill fantasy enthusiasts. It also has enough love triangles and romance subplots to keep this genre’s fans entertained for days. Cry of the Firebird contains a compelling cast of characters and a delightful grounding in the some of the world’s most ancient legends - all told by a natural storyteller.”

CRY OF THE FIREBIRD

ASHES OF THE FIREBIRD

And for Jack, who had the vodka ready when I finished writing The End.

Rise of the Firebird

Look through the cold forest and see the burning rumble. A concrete building lies in ruins. Chunks of debris lie in all directions, the cries of the wounded and the dying pierce the night in a howling song of anguish. The smell of burning flesh, chemical smoke and the mossy forest fills the air. A shimmering green light moves through the trees and five men appear. They are dressed in sturdy leather armour and they are carrying sharp steel. Their leader surveys the wreckage with cold eyes.

“
Finna Elenya
,” he says as his men spread out, picking through the ruins. He has seen this kind of destruction before and steeled himself for the inevitable. Dirty blonde hair floats in the dust and smoke. He picks his way carefully through the chunks of rock, concrete and steel to where the girl lies. In her arms, he sees the broken dead man that she cradles so closely to her. With care, he gently untangles her grip.

“You need to let him go now,” he says as she starts to protest. Words have failed her. The sound of pain and loss is primal. It is the sound of agony and heartache. He grips her tightly in his arms and lifts her broken body effortlessly. “Shhh, I have you,” he croons to her. “Never fear, we won’t leave him.”

He summons the green light to him and steps through into nothingness.

Chapter One - After Shock

Anya could hear the voices around her. Words were being said like, comatose, shock, and grief. She kept her eyes closed, a pillow tucked up close to her. She wasn’t any of those things. She was tired. An ache started in her chest and filled her body with sharp nails. Every time she went to sleep, the dream would start again. She would see and hear Trajan whispering, “Run.” Yanka and Vasilli would be standing over his body, his heart in her hands. Then they would start to eat the heart as if it was the most succulent of delicacies. Anya always woke scared, shaking and alone.

Anya couldn’t remember how she got into the suite she was currently lying in. She didn’t know how many days she had been in bed. She didn’t care. She had the will to do nothing except to sleep and to dream. If she woke, the broken nightmare that was her life would start all over again.

She dreamt of the farm and of the past months away from it. In the dreams, Trajan was everywhere. The light in his red streaked eyes when he smiled at her, and the feeling of being absolutely safe in his arms. She saw him twisting a piece of his dark hair as he read in front of the fire, heard his laughter on the edge of her mind, but she would never see the light in his eyes again or feel the brush of his lips. Vasilli and Yanka had taken that light away. Words flowed over her like water and leaked into her dreams and subconscious. They played over and over in her mind.

“
Vekja
Elenya,”
a voice commanded, pulling her from the layers of dreams. “No one else is here but me.” Anya opened her eyes very slowly. Søren sat on a chair next to her bed. Horrible hot tears filled her eyes and gushed down her cheeks. He handed her a dark green, silk handkerchief.

“I apologise, I didn’t mean to make you cry,” he said half-heartedly. “Not yet in any case.”

“Where am I and how did I get here?” Her voice was husky and her throat sore from disuse.

“You’re with the Álfr in Alaska. Welcome back.”

“Where’s Yvan?” There had been so much blood and confusion. She couldn’t remember past the blinding light and Yanka’s cold smile.

“He’s healing like the others. That is what you should be doing.”

“The Álfr let you bring us here? I thought they had rules about privacy.”

“They do,” his lips pursed together. “They’ve made an exception for you on account of the
elvianth
and that the
Groenn Skær
marked you.”

“The Álfr want to kill me themselves, don’t they? I swear, Søren, I had no idea that this would happen. I thought…”

“You were doing the right thing? Being the hero and saving the day?” he said snidely. “You’ve no idea what you have done by letting Yanka loose in the world again.”

“Trajan was murdered before my eyes. I know what I’ve done.”

“I’m sorry…about the Thanatos,” he said hesitantly. “I don’t have much respect for his kind but I know he loved you in his way, and protected you when no one else did. He didn’t deserve such a death.”

“I’ll kill Vasilli and Yanka for this,” she swore. “If I die trying so be it.” She felt the cold dark flower of revenge buried deep in her soul open and bloom. She’d never truly understood black rage until the moment Trajan fell to the ground.

“Aramis told me that she admitted Vasilli is her son. The Álfr didn’t know that and neither did he.”

“How is Aramis?” Anya remembered the sickening smell of burning dead flesh, the hand he held out to channel his power mangled from the magic.

“He’s alive but his soul is broken. The Álfr aren’t happy with his actions but it wasn’t entirely his fault. He didn’t know many things, but that’s not something that you should be worrying about now. Now’s the time to grieve for fallen companions and heal.”

Anya felt blood leave her face, “Who else?”

“The Twin’s human bodies have been too damaged. They are god heroes in this land, so they have taken on their animal forms. They aren’t too far away. When you’re better, we will hold funeral rites. Harley’s knife wound is healing though it’s been a tough battle. The others have minor wounds, but like you, they’re hurt in their soul, the ones with magical ability most of all. Yanka hit you with such a force that I am surprised any of you are alive at all.”

“I shielded them. I’m not sure how I did it. I joined my power to Aramis and made it, I don’t know, bigger,” she tried to explain.

“I’ll have to tell Ruthann that. He will be impressed.”

“Thank you for coming for us. I know you didn’t have to bring us back here,” Anya managed a weak smile and tried to ignore the pain in her chest.

“I knew if I didn’t take the rest of them, you’d never have forgiven me.”

“Whatever the reason, I won’t forget it.”

“Sleep
Elenya
,” he said. “Worry about the world tomorrow.” He brushed his fingers over her forehead and she slept.

Anya watched Yanka and Vasilli appear through the gate that bordered the farm. Yanka wore a long, heavy coat that had been placed over her thin cotton hospital scrubs. Emotions flittered across her face as she looked at the burned out rubble before finally going blank.

“You did this?” she asked as she surveyed the wreckage that was now the farmhouse.

“I lost my temper,” Vasilli shrugged. “I inherited it from my mother.” Yanka ignored him and picked her way through the burnt possessions.

“They aren’t here,” she muttered as she walked through the ash.

“What are you looking for?”

“They could’ve been destroyed.”

“No, they couldn’t have. I put spells on them myself. They would survive a blacksmith’s forge. I’d sense them if they were among the wreckage.”

“The old man that looked after Anya never taught her magic, so I don’t think she would have recognised their power. Rumour has it that she wasn’t taught because she was too much like you.” Yanka flicked her long hair behind her shoulder.

“She looks like me but that’s where the similarity ends. That girl is weak. If she had any kind of power, she would’ve stopped you from killing her lover. Her magic was strong enough to rouse me from my sleep. She’s served her purpose. If she gets in my way, I will kill her.”

“She’s untrained but she has potential.”

“She is the least of our concerns,” Yanka interrupted. “Is my house still standing?”

“Of course, you are the Dark Princess.”

“Good, I’ve had enough of this sad corner of hell.” With an effortless wave of her hand, Yanka summoned the gate and they stepped through it, fading like smoke.

Anya woke jolting and thrashing out at her sheets and blankets. “
Shalosť
wake up, you are dreaming.” Warm hands found hers and helped untangle her. Yvan’s eyes hovered over her and her panic faded.

“Yvan.” She threw her arms around him, pulling him down on the bed next to her. “I was so worried that you…” She held him tightly, her choking sobs wracking her body. He pulled her close, his arms wrapping around her.

“Little
shalosť
it’s okay, I have you.” His long fingers stroked her hair as she tried to stop her tears.

“I was so angry at him, Yvan. I thought he had abandoned me and that he’d run away like last time. I should’ve known better. I should’ve thought better of him…”

“You cannot think this way. Even if you were upset with him, he knew that you loved him. You can’t change what happened so don’t let it make you bitter. Don’t let his death change you. It wouldn’t be honouring his memory to let the darkness surround you. I know better than most what you are going through. Vasilli killed my wife in front of me. It didn’t matter that she had betrayed me. It didn’t matter that she didn’t love me. What matters is how I live with it, how I hold onto who I am. You can’t let the bitterness cripple you.”