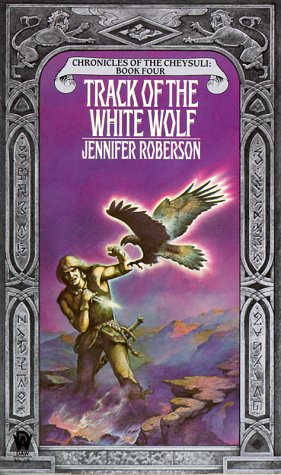 I knelt in silence, in patience,
right knee cushioned by layers of rain-soaked leaves. Boot heel pressed against
buttock; the foot within the boot, perversely, threatened suddenly to cramp.

Not now, I told it, as if the thing
might listen.

My left leg jutted up, offering a
thigh on which I could rest the arm supporting the compact bow. Support I
needed badly; I had knelt a very long time in the misted forest, keeping my
silence and my patience only because the discipline my father and brother had
taught me,, for once, held true. Perhaps I was finally learning.

How many tones did Carillon kneel as
I kneel, lying in wait for the enemy?

My grandsire's name slipped easily
into mouth or mind.

Perhaps for another man, perhaps for
another grandson, it would not. But for me, it was a legacy I did not always
desire.

Distracted by my thoughts, I did not
hear the sound behind me. I sensed only the shadow, the weight of the stalking
beast—

Even as I tried to turn on cramping
foot, the bow was knocked flying from my hands. Half-sheathed claws shredded
leather hunting doublet and, beneath that, linen, shirt. Weight descended and
crushed me to the ground, grinding my face into damp leaves and soggy tun.

In the cold, breath rushed out of my
nose and mouth like smoke from a dragon's gullet. Mountain cat.

I knew it at once, even as the cat's
weight shifted and allowed me room to move. there is a smell, not unpleasant,
about the cats. A sense of presence. An ambience, created the moment one of
their kind appears.

I rolled, coming up onto my knees,
jerking the knife free of the sheath at my belt—

A female. Full-fleshed and in prime
condition. Her lush red coat was a dappled chestnut at shoulders and haunches.
The tail lashed in short, vicious arcs as she crouched. Dark-tipped ears
flattened against wedge-shaped bead as she snarled, displaying an awesome
assemblage of curving teeth.

She hissed, as a housecat will do
when taken by surprise.

And then she purred.

I swore. Slammed the knife home into
its sheath. Spat out mud and stripped decaying leaf from face and hair.

And swore again as I saw the
laughter in her amber, slanted eyes.

And suddenly I knew—

I glanced back instantly. In the
clearing, very near the place I had waited so patiently, the red stag lay dead,
the fang stag, with the finest rack of antlers I had ever seen.

And a red-fletched arrow stood up
tike a standard from his ribs.

The cat sat down in the clearing,
commenced licking one big paw, and continued to purr noisily.

"Ian?" I looked
suspiciously at the cat a moment.

"No—Tasha." Still there
was no answer. It was all I could do not to fill the trees with my shout.
"Ian, the stag was mine—do you hear?" I waited. Wiggled my foot
inside my boot; the cramp, thank the gods, was fading.

"Ion," I said menacingly;
giving up, I bellowed it. "The stag was mine not yours!"

"But you were much too
slow." The answering voice was human, not feline. "Much too slow; did
you think the king would wait on a prince forever?"

I spun around. As usual, with him, I
had misjudged his position. There were times I would have sworn he could make
his voice issue from rock or tree, and me left searching fruitlessly for a man.

My brother sifted out of trees,
brush, slanted foggy shadows into the clearing beside the dead stag. Now that I
saw him clearly, I wondered that I had not seen him before. He had been
directly across from me. Watching, Waiting. And laughing, no doubt, at his
foolish younger brother.

But in silence, so he would not give
himself away.

I swore. Aloud, unfortunately, which
only gave him more cause to laugh. But he did not, aloud; he merely grinned his
white-toothed grin and waited in amused tolerance for me to finish my royal
tirade.

And so I did not, having no wish to
band him further reason to laugh at me, or—worse—to dispense yet another of his
ready homilies concerning a prince's proper behavior.

I glared at him a moment, unable to
keep myself from that much. I saw the bow in his hands and the red-fletched
arrows poking up from the quiver behind his shoulder. And looked again at the
matching arrow in the ribs of the red king stag.

Conversationally, I pointed out,
"Using your lir to knock me half-silly was not within the rules of the
competition."

"There were no rules," he
countered immediately.

"And what Tasha did was her own
doing, no suggestion of mine—though, admittedly, she was looking after my
interests." I saw the maddening grin again; winged black brows rose up to
disappear into equally raven hair.

"And her own, naturally, as she
shares in the kill."

"Of course," I agreed
wryly. "You would never set her on me purposely—"

"Not for a liege man to
do," he agreed blandly, with an equally bland smile. Infuriating, is my
older brother.

"You ought to teach her some
manners." I looked at the mountain cat, not at my brother. "But then,
she has arrogance enough to match yours just as she is, so I am sure you prefer
her this way."

Ian, laughing—aloud this time—did
not answer. Instead he knelt down by the stag to inspect his kill. In
fawn-colored leathers he blended easily into the foliage and fallen leaves.
Another man, lacking the skills I have learned, would not have seen Ian at all,
until he moved.

Even then, I thought only the glint
of gold on his bare arms would give him away.

I should have known. I should have
expected it. All a man has to do is look at him to know he is the better
hunter. Because a man, looking at my brother, wul see a Cheysuli warrior.

But a man, looking at me. will see
only a fellow

Homanan. Or Carillon, until he looks
again.

For all we share a Cheysuli father,
lan and I share not a whit of anything more. Certainly not in appearance.

Ian is all Cheysuli: black-haired,
dark-skinned, yellow-eyed. And I am all Homanan: tawny-haired, fair-skinned,
blue-eyed.

It may be that in a certain gesture,
a specific movement, Ian and I resemble one another. Perhaps in a turn of
phrase. But even that seems unlikely. Ian was Keep-raised, brought up by the
clan, I was bom in the royal
palace
of
Homana-Mujhar
, reared by the aristocracy.

Even our accents differ a little: he
speaks Homanan with the underlying tilt of the Cheysuli Old Tongue, frequently
slipping into the language altogether when forgetful of his surroundings; my
speech is always Homanan, laced with the nuances of Mujhara, and almost never
do I fall into the Old Tongue of my ancestors.

Not that I have no wish to. I am
Cheysuli as much as Ian—well, nearly; he is half, I claim a Quarter—and yet no
man would name me so. No man would ever look into my face and name me, in anger
or awe, a shapechanger, because I lack the yellow eyes. I lack the color
entirely; the gold, and even the language.

Because in addition to lacking
Cheysuli looks, I also lack a lir.