[Roger the Chapman 04] - The Holy Innocents 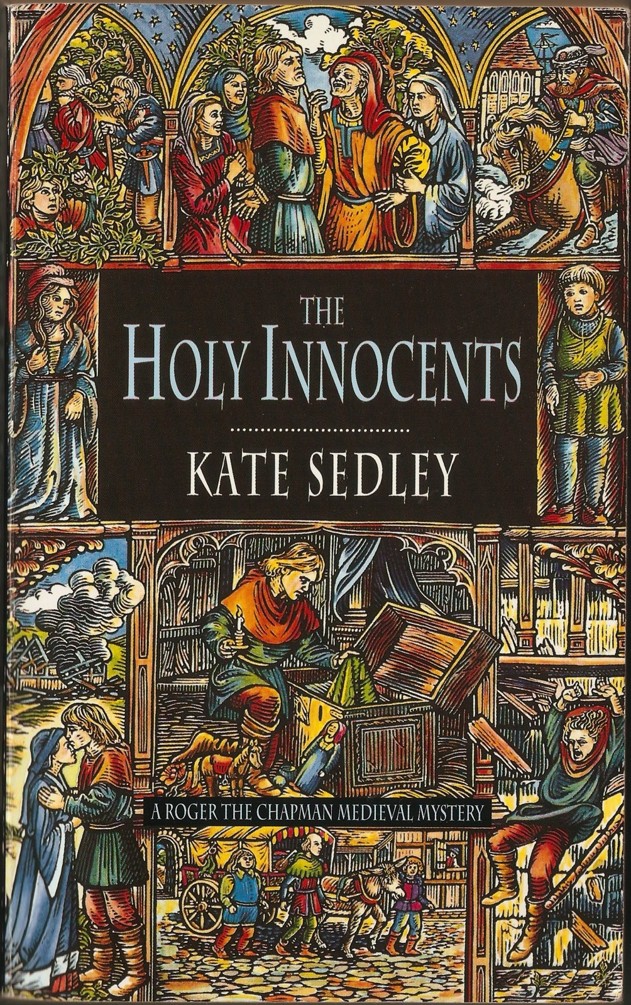 Kate Sedley was born in Bristol and educated at The Red Maids' School, Westbury-on-Trym. She is married, has a son and daughter, and one granddaughter. THE HOLY INNOCENTS is her fourth detective novel, and follows DEATH AND THE CHAPMAN, THE PLYMOUTH CLOAK and THE HANGED MAN.

Praise for her earlier novels:

'For those who like a crime novel with that little extra, I would wholeheartedly recommend Kate Sedley's ... the author gives us a glimpse into the lives of the ordinary people of the times which is enthralling because it has the ring of authenticity' - Jean Plaidy DEATH AND THE CHAPMAN 'Fifteenth-century England is artfully rendered in this suspenseful tale ... keeps the reader guessing right up to an unexpected but fitting denouement' Publishers Weekly

'Charming period piece. The scenery, occupations and finery are medieval, but the foibles are of a contemporary nature' - Kirkus Reviews

The right of Kate Sedley to be identified as the Author of the Work has been asserted by her in accordance with the Copyright, Designs and Patents Act 1988.

First published in paperback in 1995 by HEADLINE BOOK PUBLISHING

All rights reserved. No part of this publication may be reproduced, stored in a retrieval system, or transmitted, in any form or by any means, without the prior written permission of the publisher, nor be otherwise circulated in any form of binding or cover other than that in which it is published and without a similar condition being imposed on the subsequent purchaser.

Henry Skelton, a few years ago her deceased first husband

Andrew and Mary Skelton, their children

Grizelda Harbourne , caretaker of the children

Joan Elizabeth and Ursula, their daughters

Gregory Napier, her husband, a goldsmith in London

I saw them before they saw me, and so was able to step aside into the shadow of the trees which crowded down to the water's edge on either bank of the River Harbourne. It was barely dawn, and a cold, clinging, grey mist, filtering through interlaced branches of oak and alder, ash and beech, helped my presence to remain undetected as the robbers approached.

They walked in single file, their feet making no sound on the thick carpet of last year's leaves, sodden now with the rains of early April. Once, there was a crackle of beechmast and the snap of a twig as someone stepped carelessly, only to be reprimanded instantly by an angry hiss from his companions. By now, I could smell them, the mixed scent of damp and sweat and dirt emanating from their clothes, and I stealthily withdrew yet deeper into the shelter of the bushes, putting a brake of holly and stunted elder between myself and these desperate men; for one glimpse had been enough to assure me that they were outlaws, wolf-heads, living rough in the forests of south Devon.

As the leader drew abreast of my hiding-place, a shaft of watery sunlight pierced the overhanging canopy of trees, illuminating a narrow, weasel-like face and a back bent almost double by the weight of a sack slung across one shoulder. His night's booty plainly included animals from some outlying farm, judging by the blood which dripped from the coarsely woven fabric and spread in a dark stain across the mesh. The next man also carried a bulging sack, although its bumps and protrusions gave no clue in this case as to what it might contain. The third outlaw had not bothered, or had been in too great a hurry, to tie the neck of his bag securely and it had burst open to reveal its contents, a crop of vegetables from plundered gardens and smallholdings. The fourth villain held a live and struggling hen beneath one arm, its beak tied with a strip of filthy cloth in order to muffle its hysterical clucking. At that moment, however, the sunlight faded, and the rest of the ragamuffin procession became nothing more than shadows as they followed each other along the track, carved through the undergrowth by the passage of many feet.

I counted ten of them in all, a band of cut-throats who were obviously terrorizing the districts about the township of Totnes. That they were desperate men, prepared to stop at nothing, not even murder, was attested to by the wicked-looking array of knives and daggers which they wore in their belts. I had no doubt that any one of them would kill as much for pleasure as for gain, and would have no compunction whatsoever in dispatching any poor soul unfortunate enough to fall in their way. As for myself, a chapman carrying money as well as goods about his person, I should have been a dead man had they chanced to clap eyes upon me.

Long after the final robber had passed from my line of vision, I stood quietly, hardly daring to breathe, lest some straggler should yet be hurrying to catch up his evil brethren.

I was conscious of the deep quiet of the woods, of the pillared trees and thickets of bramble stretching down to the river's edge, the sliding sparkle of water showing where the Harbourne lapped placidly over its stony bed. Satisfied at last, that the outlaws must be well out of hailing distance, and offering up thanks to the Virgin for my deliverance, I stepped down once more on to the track and resumed my journey.

For, provided he could not call upon the aid of his fellows, the possibility of a man on his own did not trouble me. My height and girth, as readers of my previous chronicles will know, was sufficient in those days to assure me of victory in any hand-to-hand combat.

I had been on the road now for at least two months, making my way south from Bristol, which, after the events of the past year, had become my home. I had spent the winter in the cottage of my mother-in-law, Margaret Walker, venturing out to sell my wares only as far as the surrounding villages during the months of frost and snow, and trying to console her in some measure for the loss of my wife, her only child.

In this, I was greatly helped by the existence of Elizabeth, my baby daughter, whose birth had caused her mother's untimely death. My deepest regret, which still remains with me even to this day, when I am an old man of seventy, was that I could feel so little grief for Lillis. But I had known her for less than a year when she died. I had not been looking to settle, but circumstances had forced me into marriage; and had God not decided, in His wisdom, to take her from me, it is possible that we might have been happy together, although somehow I doubt it. Lillis was too possessive, and I too anxious to get back on the open road once the lighter nights and longer days of spring approached, for us to have achieved much domestic harmony.

My mother-in-law was far more willing to accept me for what I was; and although she made no secret of the fact that she would have liked me to stay in Bristol and help with the rearing of the child, she did not attempt to stop me when, well before Easter, I announced my intended departure.

'I shall return before winter is far advanced,' I told her, kissing her weather-beaten cheek and humping my pack on to my shoulders. 'Look after Elizabeth for me.' She nodded, and I salved my uneasy conscience by leaving her sufficient money to ensure her independence from the spinning which was her trade, did she so wish it. She came to the cottage door and watched me as I set off in the direction of the Redcliffe Gate, but even with her eyes upon me, I was unable to keep the spring from my step which the prospect of freedom gave me.

I walked south, selling my wares in the coastal villages and hamlets of Somerset and Devon, where I did a roaring trade, the inhabitants being starved of visitors and news throughout the long months of winter. I was treated royally, as befitted one of their earliest harbingers of spring, and was offered many a free meal and bed out of gratitude. In return, I gave them such gossip concerning their neighbours as I had managed to glean during my travels, and was able to inform them of the rumours which had reached Bristol just before I left: King Edward was cajoling money from a reluctant Parliament and mustering his forces in order to mount an invasion of France. Finally, I turned inland, across the wastes of Dartmoor and so down into the lush peninsula which lies south and east of Plymouth. The Hams our Saxon forebears called it, a countryside which, with its luminous fairy uplands and mysteriously shadowed dales, must surely be the equal of anything to be found in the whole of Christendom. And so, by slow degrees, I reached the cluster of houses at the mouth of the Dart, then followed the river's southern bank until I reached Bow Creek and the Dart's tributary, the Harbourne, where I did good business among the wives and, daughters of Tuckenhay, an isolated settlement, as anxious for news as everywhere else on my journey.

The next day being Sunday, I had rested, spending an unexpectedly warm night out of doors and rising before dawn to swill my face and hands in the crystal clear water of the Harbourne. Somewhere far above me, glimpsed between the boughs of the trees, the last star burned, blue-white like frost, before it, too, began to fade with the advent of the light. And the first, muted strains of birdsong had just fallen on my ears when I espied the band of outlaws, treading softly, coming along the track towards me.

I was hungry by the time I reached Bow Bridge, so I sat down by the water's edge, lowered my pack to the ground and took out the lump of wheaten bread and slab of goat's milk cheese given me by one of the Tuckenhay women for the previous day's supper. The portions had been generous, so I had prudently saved some for the morning, knowing how empty my stomach always felt on waking. On the opposite side of the river, the woods rose steeply, promising a hard climb, so, having finished eating, I lay back on the turf and closed my eyes for a few minutes; or, at least, that was all I intended. By the time I opened them again, however, the sun was well above the horizon, its rays spreading outwards in a shallow saucer of light which foretold another warm day, like the one before. A man, crossing the bridge, an axe resting on one shoulder, grinned and gave me 'good-day'. He was shortly followed by others, the first carrying a billhook and the second swinging a spade from one sinewy hand. I was reminded that, it now being April, there was much work to be done in the woods; felling timber before the ground became too soft for the carters to cart it away, stripping bark for the tanyards and replanting saplings.