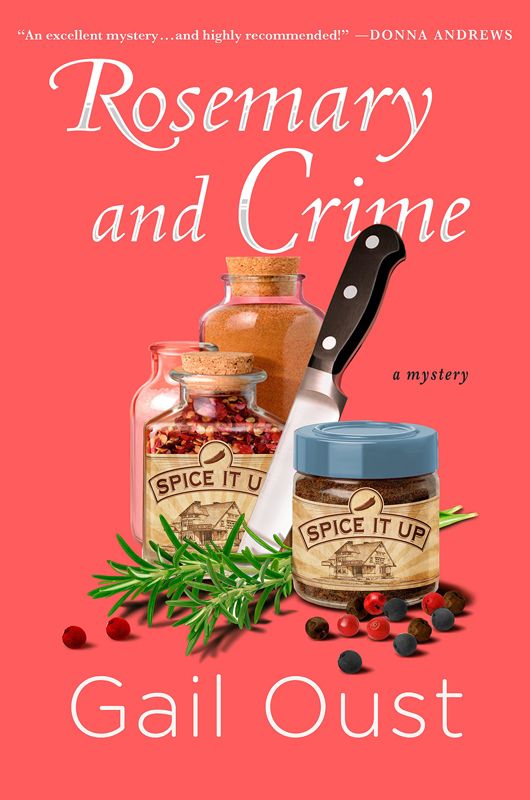 To my Michigan and South Carolina BFFs.

For me the book isn’t really finished until I’ve given special thanks to some people who have helped along the way. Leading the list is Mary Ann Beyer, amateur genealogist, golf buddy, and guardian of the books. What started out as a simple question from me ended up as a family tree. Thanks for Brigance and Zelda Zither. Friends Ann McNab and Fran McClain generously raided their cookbook shelves to come to my rescue. As for your cooking and entertaining, you set the bar high. Jessica Faust, BookEnds, LLC, superagent. What can I say, Jessica? You’re a treasure. Last, but by no means least, thanks to Bob, husband and trusty sidekick. You make my life so much easier by valiantly tackling the lion’s share of household chores—even grocery shopping, although I know you’re often befuddled by all the brands and labels.

A
CROSS THE SQUARE,
a Confederate soldier atop a concrete pedestal stared sightlessly at a couple enjoying ice cream on a wrought iron bench. Wrens warbled in the willow oaks. The sky was cerulean and cloudless; the breeze warm and gentle. But anyone who’s ever been in the path of a hurricane wouldn’t be lulled into complacency by ice cream, blue skies, or a balmy breeze. They’d recall another time, perhaps another place, and remember what it was like—this calm before the storm. Unfortunately, I had no such experience and thus went merrily about my business, unaware of the havoc barreling in my direction.

“I declare, Piper Prescott, you’ve gone and outdone yourself.”

I gave Reba Mae Johnson, my very best friend in the whole wide world, a friendly jab in the ribs. “Unless my memory’s failing, you told me I was out of my cotton pickin’ mind the first time I mentioned a spice shop.”

Reba Mae grinned, unabashed. “Guilty as charged. Wasn’t just me who said that, either. Half the folks here thought you’d gone off the deep end, what with CJ dumpin’ you and all. Talk was, you might be havin’ a breakdown or somethin’.”

I refused to take offense. Granted, owning a spice shop is a far cry from playing bridge at the country club, but like the sign over my brand-new antique cash register says,
WHEN LIFE GIVES YOU LEMONS, MAKE LEMONADE.
It just so happens that Spice It Up!, Brandywine Creek’s newest enterprise, happens to be my own particular brand of “lemonade.”

After my dear husband “dumped” me, as Reba Mae so inelegantly phrased it, in favor of chasing ambulances and a twenty-four-year-old in a short skirt, I squeezed my lemons dry. I’d taken the plunge and invested the entire sum of my divorce settlement in a dream I’d harbored for years. Even more than I loved to cook and bake, I loved to experiment with food, to improvise. And the best way to do this, I found, was by using spices. A pinch of this, a dash of that, and abracadabra, a good recipe became a great recipe.

After twenty-some years married to a control freak, being my own boss held enormous appeal. I’d been such a bundle of nerves after signing the documents that made me proprietor of a building dating back to Prohibition that I barely made it to the ladies’ room before throwing up.

The original establishment, I’d been told, had burned to the ground when the still in the basement exploded and set fire to half the town. Two of the bootleggers had been killed outright, another injured. People still bemoan the fact that the event garnered little press since the fire coincided with the St. Valentine’s Day massacre in Chicago. A small town in Georgia, even one that boasts a reenactment of a Civil War battle and is home to the Brandywine BBQ Festival, can’t compete with names like Al Capone and Bugs Moran.

Unable to support the tanning salon–movie rental business of the previous tenants, the building had stood vacant for a couple years. The bank had been more than happy to unload it, and I counted myself fortunate it fit my limited budget. The upper floor provided living quarters—nothing fancy, like the home I’d once shared with CJ and my son and daughter, but adequate. I might be broke, but at least I wasn’t homeless.

I drew in a deep breath and let it out in a contented sigh. The heady scents of cinnamon, cloves, and nutmeg permeated the air. “Don’t you just
love
the smell of this place?”

I aligned an already neat row of apothecary jars that contained sticks of cinnamon from such exotic locales as Sri Lanka, Sumatra, and China. “That’s because you spend all day sniffing those nasty chemicals—perm solutions and the like.”

“Maybe, but you won’t catch me bellyachin’.” Reba Mae fluffed her spiky magenta locks. Reba Mae loved nothing better than to experiment with hair color. She confessed she’d been aiming for auburn but wound up with magenta instead. “The Klassy Kut puts food on the table and a roof over the heads of me and my boys. Besides, there are certain perks that go along with runnin’ the best beauty shop in the county.” She gave me a wink. “You know I’m among the first to hear all the juicy gossip. Ask me, sugar, and I’ll tell you, life is good.”

“Yes, life is good,” I agreed. “It’ll be even better if tomorrow’s grand opening goes off without a hitch.”

“I think you’re mighty brave askin’ Mario Barrone to give a cookin’ demonstration. He’s got quite the reputation with that temper of his.”

I shrugged off Reba Mae’s concern. “So, he’s a little temperamental. That’s the way with a lot of great chefs.”

“A
little
? Honeybun, he’s got the worst temper of anyone I know.”

“He’s a fabulous cook,” I countered. I refused to admit, even to my BFF, that I had doubts of my own about Mario.

“Hmph! A fabulous cook with a fabulous ego. The man’s not a happy camper unless one of his staff’s in tears. Some nights you can hear him hollerin’ and carryin’ on clear out on the sidewalk.”

At that precise moment, none other than the subject under discussion himself stormed into my shop. Mario is owner and chef at Trattoria Milano, Brandywine Creek’s answer to fine dining. Most people simply refer to the little restaurant as the “Tratory,” knowing it annoys him … but always with a quick glance over their shoulders first to make sure Mario isn’t within earshot.

“This…?” Mario stuck his opened palm under my nose. “This is what you give me when I ask for juniper berries?”

I stared down at the waxy purple-black berries the size of small peas. I must admit they looked a little less round, and a lot more squishy, since I’d personally delivered them earlier that day to Mario’s newest sous chef. What had the guy done to the poor things? Sat on them?

“What do you take me for? A fool? An imbecile?”

Angry at his tone, I felt my cheeks burn—the curse of being a redhead. I had half a mind to pull a Donald Trump and, with ringing finality, utter the words, “You’re fired!” But I bit my tongue instead. My dream of a spectacular grand opening would go up in smoke. All the hard work and elbow grease. All the money spent purchasing only premium spices, choosing the best containers, designing the cleverest labels. Everything would be in vain without Mario Barrone, my superstar, to lure people through the front door. The man might be a prima donna, but no one, and I mean no one, questions his ability to prepare dishes that cause mouths to water. Temper or no temper, the man was a true genius in the kitchen.

Reba Mae shifted to peer over my shoulder. “Those … those … berries look okay to me. I don’t see anythin’ wrong with ’em.”

“Bah! What would you know about such things?” Mario glared at her briefly, his dark eyes glittering, then directed his ire back at me. “And furthermore, I distinctly requested juniper berries grown in Italy. Not ones grown in Albania.”

That did it! Folding my arms across my chest, I looked him square in the eye. “Look here, Mario, stop treating me like
I’m
the idiot. You asked for juniper berries grown in the Mediterranean and that’s exactly what I gave you. For your information, they are the only type I stock.”

In a fit of rage, he hurled the juniper berries onto my newly polished heart pine floor and stomped out the front door.

Reba Mae wagged her head. “You’ve gone and done it this time, girlfriend.”

“Dammit,” I muttered as I trailed after him. “Mario, wait…”

We were now out on the sidewalk and passersby paused to watch the fireworks. But I ignored them. “The reporter from
The Statesman
is going to be here. He’s bringing a photographer. Think of all the publicity for the trattoria.” I’d nearly slipped and called it the Tratory but, thank goodness, caught myself in the nick of time.

He stopped and turned at hearing this. “Photographer, you say?”

I felt encouraged. “I was thinking of sending the photo along with a press release to
Southern Living.
” Necessity makes salesmen of us all.

“And from time to time, Paula Deen features regional chefs in her magazine,” I continued, ad-libbing at a furious pace. “Who knows, maybe…?”

“Fine,” Mario snapped, saving me from even bigger whoppers. “I will cook for you my roast lamb with juniper and rosemary. But this time, remember,” he warned, shaking a thick finger in my face, “I want only the best.
Capisce?
”

“If that means ‘understand,’ then yes, I
capisce.
”

Mario turned on his heel and marched off.

The crowd parted in his wake. No one, it seemed, wanted to antagonize the man further. I found myself the center of attention and sensed sympathetic glances directed my way. I was about to return to my shop when I noticed a familiar figure lounging against the fender of a shiny silver Lexus. My heart sank. It was Chandler Jameson “CJ” Prescott III, my ex-husband. From the smirk on CJ’s face, I knew he’d enjoyed seeing me grovel.

C
J STRUTTED INTO
my shop as though he owned the place. “How ya doin’, Scooter?”

I gritted my teeth at hearing the nickname I’d once thought endearing but now detested. “Fine and dandy, thank you very much.”

“So this is what all the fuss is about.” He made an expansive gesture, taking in the shop and all its accoutrements. “Rumor has it you invested every red cent I gave you into what’s bound to be a losing proposition.”

Cuna de gato by Kurt Vonnegut
You Are Not So Smart: Why You Have Too Many Friends on Facebook, Why Your Memory Is Mostly Fiction, and 46 Other Ways You're Deluding Yourself by David Mcraney
Here Where the Sunbeams Are Green by Helen Phillips
Blue Twilight by Jessica Speart
Danger on Vampire Trail by Franklin W. Dixon
Runaway Bride (Across the Stars: Book 2) by Nordin, Ruth Ann
Thicker than Water by Rett MacPherson
Play to Win by Tiffany Snow
Neverseen by Shannon Messenger
Love in the Time of Technology 1 by Veramu, Joseph