Rotting to the Core (Keep Your Crowbar Handy Book 2) 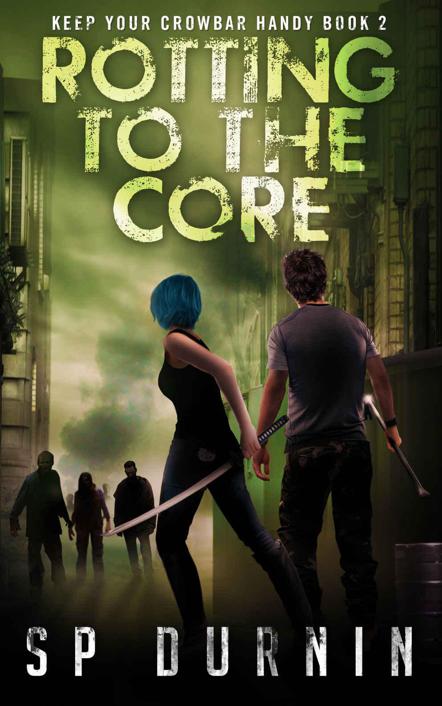 PRAISE FOR
ROTTING TO THE CORE

“
S.P. Durnin is a unique voice
in the world of horror. This book will leave you wanting more! Well
written and well-paced, you won’t be able to put it down!”

“
S.P. Durnin’s masterful
storytelling and well developed characters pull you in from the
first chapter, grabbing you by the throat and holding your
attention to the very last sentence. Fiction this powerful is
nothing short of addicting!”

-Devan Sagliani, author of
UNDEAD L.A.
and
ZOMBIE ATTACK!: RISE OF THE HORDE
.

“
The Crowbar Chronicles is a
rousing good tale. S.P. Durnin takes you on a wild ride at high
speed into the aftermath of a zombie apocalypse. You’ll fall in
love with the characters, and there’s someone for everybody. I
highly recommend the novels in this delightful series!”

-Sean Liebling, author of
BLOOD, BRAINS AND BULLETS
and
THE REAPER: NO
MERCEY.

“
Durnin pulls no punches in
this thrill ride through the apocalypse!”

-Jason Brant, author of
ASH
and
THE HUNGER TRILOGY: DEVOURED
,
CONSUMED
, and
RAVAGED
.

PRAISE FOR KEEP
YOUR CROWBAR HANDY: THE CROWBAR CHRONICLES

“…
There’s a reason the
characters, and the reader, will want to keep that crowbar
handy!”

-Tony Monchinski, Author of
I
KILL MONSTERS
and the critically acclaimed
EDEN
novels.

“
KYCH is a rollercoaster ride
of action, adventure, suspense, horror, gore, and personal
relationships at the end of the world as we know it. If this is
only the first book in the series then hold on to your socks, the
rest will blow them off!”

-James Jackson, survival
instructor/weapons advisor, and author of
UP FROM THE
DEPTHS.

“
S.P. Durnin manages to bring
a shining light into the quivering darkness of the
apocalypse!”

“…
The humor is great, the
survivors are fun to follow, and each truly speaks with a voice of
their own.”

“
I found myself hooked into
the book early on and kept getting mad that I had to stop reading
it to do things like work my day job, sleep, and tend to other
annoying but necessary interruptions.”

“…
A high-action story of
survival, love, betrayal and sacrifice. If you enjoy the zombie
genre, they you’ll definitely enjoy this book!”

-Patrick S. Dorazio, author of
COMES THE DARK, INTO THE DARK,
and
BEYOND THE
DARK.

“…
S.P. Durnin takes you on a
wild ride through the zombie apocalypse, all the while showing us
both the best and the worst in people. If you like zombies, you
will love this book!”

-Cedric Nye, author of
THE
ROAD TO HELL IS PAVED WITH ZOMBIES

ROTTING TO THE
CORE

Book Two of the Crowbar
Chronicles

ROTTING TO THE CORE

This book is a work of fiction.
People, places, events, and situations are the product of the
author's imagination. Any resemblance to actual persons, living or
dead, or historical events, is purely coincidental.

No part of this book may be
reproduced, stored in a retrieval system, or transmitted by any
means without the written permission of the author and
publisher.

Once again, I should take this
opportunity to profusely thank a few people, even though most
already know Who They Are. Those who, through advice and
encouragement (which sometimes entails putting a swift boot upside
my butt cheek), keep that crowbar swinging.

Tony (The Beast) Monchinski, Sara
(Baconhugs!) Beverage, J.L. Bourne, Bowie V. Ibarra, Michael (Our
Benevolent Overlord) Wilson and all the Mighty Minions of Permuted
Press for their herculean efforts, my editor Bobbie Metevier (who
–once again- didn’t lynch me over my “comma fetish”), Jason
(because the apocalypse should be fun!), Brant, James R. Jackson of
The Ward Room (author resource extraordinaire!), Roy Migabon (for
another awesome cover!), Shawn (Walking Corpse) Riddle, John (The
Camel Spider) Brewer, Jackie Chin and the Merry Marauders of
Zombiepalooza Radio, Guy Cain (ZASC!), Brian (Gnash) Parker, Thomas
(OMI) Wolfenden, Devan (ZA!) Sagliani, Eric S. Brown, Danielle
Pascale and Jeffery Clare of All Things Zombie, Chris Claremont
(for years ago taking the time to talk with a young punk at a comic
book shop, back when I was a young punk), Michael S. Gardner, Shana
Festa and the gang at The Bookie Monster, and George A. Romero and
Tom Savini (the High Lords of Harmful Matter) for paving the
way.

*Special thanks goes out to my
Beta (reader) Corps. Tim (Good Stuff) Wendt, Keith (Jitterfreak!)
Rogers, Anthony (X) Masten and Leslie B. Foster (See? Told ya you’d
make it into the book kid).*

Lastly (and certainly not least)
thank you to my Better Half. Not only because she’s the buxom,
intelligent Ginger that haunts every Irishman’s dreams, but because
she’s able to quiet the horrors that reside in the deepest,
darkest, most terrifying corners of my back-brain.

Even the ones that scare the shit
out of me...

People don't appreciate what they have.

It takes something pretty drastic to shock
the average person out of their own head—9/11, Hurricane Katrina,
Benghazi, something to that effect. A traumatic, usually bloody and
well-televised, event that reminds them that neither they nor their
loved ones are immortal.

Except for now, of course.

Anyone left alive is very appreciative of
said fact, and most likely feel lucky enough to roll double-sixes
all night long.

Four months ago, much of human civilization
came to an end. Don't get the wrong idea. There wasn't a nuclear
war, no sudden polar shift and (as far as we know) the Ozone layer
is still up there. We weren't hit by a rogue comet from space. I'll
bet the sky-watching doomsayers were all pretty upset planet Nibiru
never showed up. Aliens didn't invade either. No super-intelligent,
highly-evolved space badgers swooped down to raze cities in flying
saucers, and there was no cataclysmic volcanic activity that
blotted out the sun causing an ice age. Some of those scenarios
would've almost been preferable actually...

What happened? The recently deceased got up
and started chowing down on the living.

You read that right.

Zombies. Mobile corpses. We call them
Maggot-heads. Kat thinks the label is hilarious, and Foster insists
it's good for morale. You know, comedic objectification of
something frightening?

Yeah. I didn't buy it either, but what can I
do? The name stuck.

Now, as to what caused dead bodies to get up
and kill? Nobody has the first clue. Space-borne, parasitic
organisms? An Amazonian super-virus? Hell was full so all the dead
were sent back? Who knows? No one cares at this point. Believe it
or not, when you're fighting (or more often running) for your life,
there's normally not a lot of free time to ponder the mysteries of
the universe.

It's no picnic, let me tell you. Almost every
day is a new lesson in
disturbing
with a side of
That's
Just Fucking Nasty in Unheard Of Ways
. The maggot-heads (the
dead) are shambling around everywhere, there are people out there
preying on the living for food, weapons and other less, shall we
say, “innocent” reasons. It shouldn't surprise me how little time
it took for much of humanity to regress back into what amounts to
barbaric tribalism.

Gods, what a crock. Ignore me. Occasionally,
I have bouts of contemplative naval-gazing and spend too much time
thinking about what I
should
do, instead of what I
have
to do. That's Rule One in the zombie apocalypse. “Do
what ya gotta do,” as the Chief says. Good advice, but difficult to
adhere to sometimes. Maybe it's easier if you're alone, without
anyone to look out for, or to watch
your
back when you need
it. I couldn't be that way though. The survivors we've gathered
since this whole thing started? I wouldn't trade any of them.
Alright, yes, we're each a little crazy in different (and sometimes
disturbing) ways. No problems admitting that here. But together
we're stronger than any of us could be on our own. No matter how
screwed up our little group is, it's a really good feeling to have
people you care for and who care about you. Especially when one of
them is the woman who ended up...