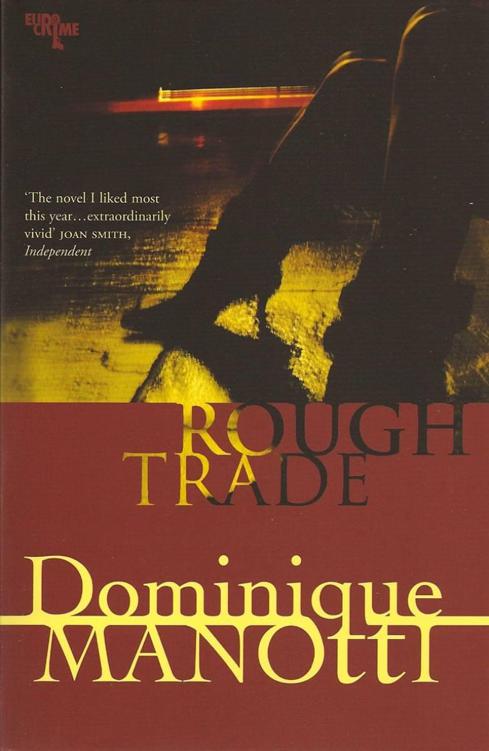 ‘The best French crime novel in a very long time and moreover a thriller you couldn’t improve on.
Rough
Trade
is proof of a towering talent. Manotti has set herself a high standard to live up to’ –
Libération

‘A fierce pace, grungy rogues and
flics
, and a racy translation make for a memorable trip down the mean streets of the 10th
arrondissement
’ – Christopher Hurst,
Independent

‘There is already a Manotti style, confident and exciting. Readers gripped by a passion for intrigue are in for a treat!’ –
Elle

‘Hard-hitting “bulletins from the street”, of a kind rare in UK crime fiction … the major strength of Manotti’s complex,
well-plotted
novel is its pace and documentary realism, a major concern the political and social forces at work both in and beyond the city’ –
Tangled
Web

translated from French by
Margaret Crosland and Elfreda Powell

Everything, or almost everything, has been invented in this story. The characters, plot and action are entirely fictitious: any
resemblance
to real events or personalities is therefore, as they say, entirely fortuitous. On the other hand, quotations from the press are accurate, as is the context in which they were written, in
particular
that of the Sentier in spring 1980 and the illegal workers’ endeavours to obtain legal status.

Heroin is now entering from Iran, Pakistan and Afghanistan. Last year Iran harvested 1,500 tons of raw opium. It is in these countries that the opium is being refined – and particularly in Turkey – then transported by road into Western Europe. Note, however, that this heroin is 20 per cent pure, as opposed to only 3.5 per cent as produced in Mexico. In Germany last year there were 600 cases of overdosing as a direct result of this new heroin.

There’s a girl, sitting naked on the edge of a vast white bed in the middle of a room, with mirrors all around. She’s childlike yet
already
world-weary. In a corner is a Louis XV armchair; at the far end, a table-height fridge. On it are tumblers, flutes, goblets, an assortment of glasses. She’s gently swinging her legs and singing to herself. A man comes in. He’s also naked. She studies him, gives him the once-over. Around forty-five, bullneck, fat, small bum, thin legs, balding, but a real mat of ginger hair on his chest. She smiles and beckons, and he, with gluttonous face, sidles slowly towards the ice-box, opens it, pours himself a very generous whisky –‘Want a drink, baby girl?’ – he raises his glass to her. The gesture is rather too expansive: he sloshes the whisky on the thick white carpet. She shakes her head, says nothing, but has a constant smile. He drinks, lets the glass fall on the carpet, goes over to her, collapses on the bed, laughing.

She makes him lie face down, sits on the small of his back. Next to him, she’s incredibly fragile. She begins massaging him,
mewing
softly to get herself into the rhythm. He lets her do it, groans with pleasure, encourages her. ‘Give your little daddy a cuddle.’ She lies on top of him, nibbles his neck, his ears. He stirs slowly, emits a few inaudible sounds, snatches at the carpet with his
fingers
. She turns him over on to his back. He looks pleased. She gently massages his dick. The man leans up on his elbows. He looks at this tiny body barely able to balance on his, turns towards the mirrors and smiles at them. He’s humming. She solemnly applies herself to her task. Her face is more attentive, her smile fixed, her eyes watching the other person’s reaction.

All at once the man senses he’s being watched. He seems to be waking from a long sleep, but his eyes are glazed. The girl slowly raises her hands towards the man’s nipples and starts pinching them gently. The humming transmutes to a long moan. He sits up and she falls on the bed. He’s overcome with panicky fear. His eyes are dilated. He screams ‘She’s going to kill me’. He curls up, hands over eyes, and starts kicking out at the girl. ‘Is it a game?’ she asks, still smiling, but seems a little anxious. She avoids the kicks and tries to calm him by drawing him down on the bed, caressing his shoulders and nipples. ‘Remember, I’m your baby.’ But he screams again. ‘Don’t grow up, don’t grow up.’ Then he grabs her by the throat, shakes her, throws her down on the bed and squeezes, squeezes. ‘You won’t have me.’ She struggles a bit, not much, she’s completely crushed by the man’s massive weight. She can’t cry out any more. After one, two minutes she stops struggling altogether.

A group of Turks, about fifteen in all, and five or six Frenchmen, are crowded together at the back of a café-tabac opposite the station. Everyone’s drinking black coffee and the French are eating
croissants
. On a table are two huge piles of leaflets in salmon pink paper, typewritten then just roneoed, recto in French, verso in Turkish.

The Defence Committee for Turks in France calls upon the Turkish workers of the Sentier district to stop working on Monday 3 March, and to assemble at the Sentier Metro station at midday. The purpose of this meeting is to get your papers legalized and have better working conditions.

They cluster around a map of Paris. Soleiman’s forming small groups of five, made up of Turks with a Frenchman in charge. Each group receives a list of streets to cover, some are jotting down names on a bit of newspaper or cigarette pack. The scene has an air of Bolshevik Russia, pre-1917.

Everyone stands up – there’s bedlam – and goes out into the square. It’s going to be a beautiful day. Like plunging into the complete unknown, but that’s too shaming to admit. You must look as though you know what you’re doing.

Soleiman takes charge of a group and begins to tackle rue d’Aboukir, a female journalist from
Libération
in tow. He’s tall, slim, very erect, even a bit rigid, with a longish face, high
cheekbones
, a thin prominent nose and huge blue eyes, a light brown mop of hair, dark complexion. The Turks listen to him, the girl looks on. Each building is to be gone into, the names read on the mailboxes, and any picked out that look Turkish or Yugoslav. They climb the stairs. In the old buildings the entrance halls are dark, staircases tortuous. On every floor the noise of sewing-machines can be heard. Soleiman knocks on the door. The boss opens up, or more often a worker. A discussion then ensues, either in Turkish or French. ‘Good morning. We’re the Defence Committee for Turks, we’ve come to talk to you about the strike and the rally to get legal papers for Turkish workers.’ Whoever opens the door turns to the workshop: ‘What d’you reckon? Shall we let him in?’ ‘Yes … sure …’ Not a single door is shut on them the whole morning.

Cramped, ill-lit, overheated workrooms, smells of dressing. But a warm atmosphere. Enormous radio sets broadcast news and music from back home. There’s talk, banter. From time to time a cousin drops by to say ‘hallo’ or a worker goes downstairs to play the
pinball
machine.

When Soleiman and his group enter, the machines stop, people jostle between the tables, coffee’s passed around, the boss joining in the discussion. The idea seems remote. But will they come for the midday meeting in the Sentier? Maybe. Soleiman leaves a few leaflets. The group heads for the next floor up or the next building.

Boulevard Saint-Denis, then rue du Faubourg-Saint-Martin … the buildings become more spacious, the workrooms better lit, more airy. Behind the nineteenth-century façades, some of the courtyards are real factories, with tailoring on every floor and
female
workers living in the servants’ quarters in the attics; women in headscarves and long skirts open the door. Soleiman doesn’t know what to say to them. He must find it inappropriate for them to go down into the street.

The group works its way back up as a far as rue de Belleville. Really dilapidated buildings sometimes, seedy corridors, miserable workrooms, some even without a door, just a big cardboard box blocking the entrance, but the same welcome everywhere. The group’s worn out, it’s hot at this hour of the morning. More and more frequently they stop at bistros, and here workers are already coming to ask Soleiman for leaflets themselves (for here everyone knows everything). Now they must turn back in order to be at the Sentier Metro station at midday.

In the street running down towards the square, small groups of militants are joining forces, overexcited by the welcome they’ve received. They move out on to the square. No one’s there. Of course, it’s what you’d expect. Imagine opening the workroom door, listening, yes, going down to the street: they mustn’t
fantasize
. But the militants have a fighting spirit and are used to being on their own. Soleiman puts the PA system in position. They unravel some rolls of red fabric to mark boundaries for their meeting place. That raw red is beautiful in the sun. Soleiman begins
speaking
in Turkish. He gives an account of what it’s like to have illegal status, disguised as a tourist with a camera slung over his shoulder; the fear you have to overcome when you see a policeman on the street, the way you have to go on walking, the friskings, the nights in police stations, deportation orders. It’s over. We want no more of it. We’re here, we’re working. We want residence permits, work permits. Dignity.

And then the nearest cafés, packed full, begin to empty on to the square. The men listen, discuss things among themselves, enter inside the red cloth boundaries.

Little groups come down from adjacent streets, in small prudent clusters, but there are more and more of them. By 1 p.m. more than 2,000 workers have assembled inside the boundaries; in rue Réaumur the traffic is brought to a standstill – but not a cop in sight. It’s intoxicating. The illegal workers are occupying the street, and no one’s coming to move them off. The men are shouting ‘
Yasasin
grevi
– Long live the strike. Residence permit, work
permit
’. The PA systems move about, everyone wants to put in a word. Soleiman is shivering in the sunshine. He has wanted this moment with every breath in his body, but he couldn’t believe it – only now does he become aware that he never believed it – this heady
moment
when the masses begin to be real, and abstractions are left behind, this moment where everything becomes – perhaps –
possible
… when the world will erupt into change.

No one knows what to do with this huge, unexpected crowd. Even if the cops aren’t here, they could still come. Staying in this one place makes them too vulnerable. But the men don’t want to leave any more. Unobtrusively Soleiman moves the cloth
boundaries
forward towards the Bourse du Travail – the Trade Union Centre. Here they can get news on the negotiations taking place with the government: they must stick together. They’ll be in a safe place too. The demonstration’s running very smoothly, it’s
impressive
seeing this really compact group of swarthy moustachioed men all in shades of grey, shouting slogans in Turkish without ever pausing for breath and clutching those long, silent red banners.

Three Scenarios in Which Hana Sasaki Grows a Tail by Kelly Luce
Into the Lion's Den by Tionne Rogers
The Autobiography of Jack the Ripper by James Carnac
How to Deceive a Duke by Lecia Cornwall
A Cookie Before Dying by Lowell, Virginia
Balto and the Great Race by Elizabeth Cody Kimmel
Love on the Horizon (A Northern Woods Novel) by Roberts, Charliann
The Wedding Sisters by Jamie Brenner
The Scarlatti Inheritance by Robert Ludlum
A Katie Kazoo Christmas by Nancy Krulik