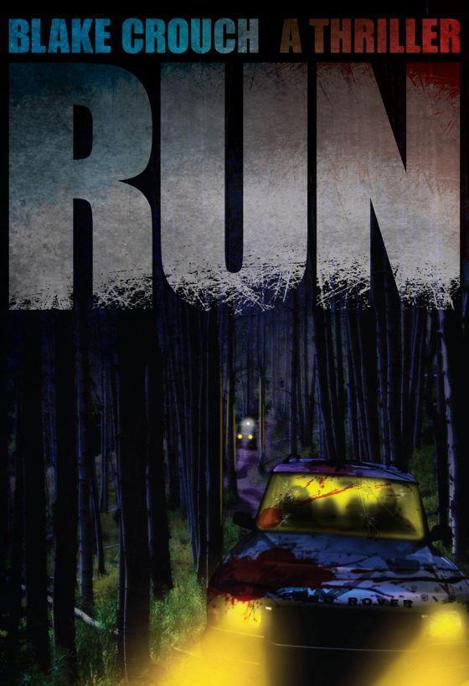 Picture this: A landscape of American genocide...

5 d a y s a g o
A rash of bizarre murders swept the country...
Senseless. Brutal. Seemingly unconnected.
A cop walked into a nursing home and unloaded his weapons on elderly and staff alike.
A mass of school shootings.
Prison riots of unprecedented brutality.
Mind-boggling acts of violence in every state.

3 d a y s a g o
The President addressed the nation and begged for calm and peace...

T o n i g h t
They're reading the names of those to be killed on the Emergency Broadcast System. You are listening over the battery-powered radio on your kitchen table, and they've just read yours.

Your name is Jack Colclough. You have a wife, a daughter, and a young son. You live in Albuquerque, New Mexico. People are coming to your house to kill you and your family. You don't know why, but you don't have time to think about that any more.

You only have time to...

RUN is a work of fiction. Names, characters, businesses, organizations, places, events, and incidents either are the product of the author’s imagination or are used fictitiously. Any resemblance to actual persons, living or dead, events, or locales is entirely coincidental.

For more information about the author, please visit www.blakecrouch.com.

For more information about the artist, please visit www.jeroentenberge.com.

This ebook is licensed for your personal enjoyment only. This ebook may not be re-sold or given away to other people. If you would like to share this book with another person, please purchase an additional copy for each person you share it with. If you're reading this book and did not purchase it, or it was not purchased for your use only, then you should return to Smashwords.com and purchase your own copy. Thank you for respecting the author's work.

Confirmation of the murders came by way of two shocking films shot by holidaymakers. The first was initially believed to show a dolphin fishing for salmon - until closer examination revealed a relentless attack on a porpoise. . .The team described the mammals’ injuries as “perhaps the worst example of inter-specific aggression any of us had ever seen. This young female had literally had the life beaten out of her.”

The attack was. . .the first recorded instance of lethal raiding among chimpanzees. Until the attack. . .scientists treated the remarkable violence of humanity as something uniquely ours. Scientists thought that only humans deliberately sought out and killed members of their own species.

THE tattered windsock hangs limp against its pole. Weeds erupt through fissures in the ancient pavement of the runway where she stands, and in the distance, support beams rise from heaps of twisted metal—three hangars, long since toppled upon a half dozen single- and twin-engine airplanes. She watches the Beechcraft that brought her here lift off the ground, props screaming, and climb to clear the pines a quarter mile past the end of the runway. She walks into the field. The midmorning sun blazing down on her bare shoulders. The grass that grazes her sandaled feet still cold with dew. Someone jogs toward her, and beyond them she can see the team already at work, imagines they started the moment the light became worth a damn.

The young man who has come to greet her smiles and tries to take her duffle bag, but she says, “No, I’ve got it, thanks,” and keeps walking, her eyes catching on the colony of white canvas tents standing several football fields away near the northern edge of the forest. Still probably an insufficient distance to avoid the stink when the wind blows out of the south.

“It’s so cool to finally meet you. I’ve read all about your work. I’m even using two of your books in my thesis.”

“That’s great. Good luck with it.”

“You know, there’s a few decent bars in town. Maybe we could get together and talk sometime?”

She lifts the strap of her heavy bag, swings it onto the other shoulder, and ducks under the yellow crime scene tape that circumnavigates the pit.

They arrive at the edge.

The young man says, “I’m doing my thesis on—”

“I don’t mean to be rude, Matt, but could you give me a minute alone here?”

Matt heads off toward the tents, and she lets her bag slide off her shoulder into the grass, estimating the dimensions of the pit at thirty-five meters by twenty meters, and presently attended to by nine people, seemingly oblivious to the flies and the stench, each in their respective worlds, doing what they walk this earth to do. She sits down and watches them work. Nearby, a man with shoulder-length graying hair buries a pickax into a wall of dirt. A young woman—probably another intern—flits from station to station, filling a bucket with backdirt to be added to the mound of gravefill near the southern edge of the pit. Everywhere that human remains have been exposed, red flags stand thrust into the earth. She stops counting them after thirty. The nearest anthropologist appears on the verge of pedestaling a skeletonized body, down to the detail work now—poking chopsticks between ribs to clear out the dirt. Other skeletons lie partially exposed in the upper layers. The remnants of human beings with whom she will become closely acquainted in the weeks to come. Deeper, the dead are more than likely mummified, possibly even fleshed depending on the water content of the grave. Beside the autopsy tent on the other side, tables have been erected in the grass, and at one of them, a woman she recognizes from a previous UN mission is at work reassembling a small skeleton on a black velvet cloth to be photographed.

She realizes she’s crying. Tears are fine, even healthy in this line of work, just never on the clock, never in the grave. If you lose control down there, you might never get it back.

Approaching footsteps snap her out of her reverie. She wipes her face and looks up, sees Sam coming toward her, the bald and scrawny Australian team leader who always wears a tie, especially in the field, his rubber boots swishing through the grass. He plops down beside her, reeking of decomp. Rips off the pair of filthy, elbow-length gloves and tosses them in the grass.

“How many have you taken out so far?” she asks.

“Twenty-nine. Mapping system shows a hundred and fifty, hundred and seventy-five still down in there.”

“Yeah, we’ve collected a ton of .223 Remington casings. But this is another weird one. Same thing we saw in that mass grave in Denver. Maybe you heard about it.”

“Have you determined what was used?”

“In most instances, it’s not a clean break, like a machete or ax strike. These bones are splintered.”

“A chainsaw would do that.”

“So I’m thinking they cut everyone down with AR-15s, and then went through with chainsaws. Making sure no one crawled out.”

The blond hairs on the back of her neck stand erect, a rod of ice descending her spine. The sun burns down out of the bright June sky, more intense for the elevation. Brushstrokes of snow linger above timberline on the distant peaks.

“Yeah. Just that this is my first mission out west. I’d been working New York City up until now.”

“Look, take the day if you want. Get yourself acclimated. You’ll need your head right for this one.”

“No.” She stands, hoisting the duffle bag out of the grass and engaging that compartment in her brain that functions solely as a cold, indifferent scientist. “Let’s go to work.”

There is no decent place to stand in a massacre.

THE
president had just finished addressing the nation, and the anchors and pundits were back on the airwaves, scrambling, as they had been for the last three days, to sort out the chaos.

Dee Colclough lay watching it all on a flatscreen from a ninth-floor hotel room ten minutes from home, a sheet twisted between her legs, the air-conditioning cool against the film of sweat on her skin.

She looked over at Kiernan, said, “Even the anchors look scared.”

Kiernan stubbed out his cigarette and blew a river of smoke at the television.

“I have to report tomorrow morning.” He lit another one. “What I hear, we’ll just be patrolling neighborhoods.”

“Keeping the peace until it all blows over?”

He glanced at her, head cocked with that boyish smirk she’d fallen for six months ago when he’d deposed her as an adverse expert witness in a medical malpractice case. “Does anything about this make you feel like it’s going to blow over?”

A new banner scrolled across the bottom of the screen—45 dead in a mass shooting at a Southern Baptist church in Columbia, South Carolina.

Kiernan dragged heavily on his cigarette. “Something’s happening,” he said.

“What are you talking about?”

He didn’t answer right away, just sat there for a while, smoking.

“It’s been coming on now, little by little, for days,” he said finally.

“I barely do myself.”

Through the cracked window of their hotel room—distant gunshots and sirens.

“This was supposed to be our week,” she said. “You were going to tell Myra. I was—”

“You should go home, be with your family.”

“Your kids at least.”

“What is this, Kiernan?” She could feel an angry knot bulging in her throat. “Are we not in this together? Are you having second thoughts about everything or what?”

“Do you have any concept of what I’ve already sacrificed for you?”

She couldn’t see all of his face in the mirror on the opposite wall, but she could see his eyes. Gaping into nothing. A thousand-yard stare. Somewhere other than this room. He’d gone deep, and she’d sensed it even before this moment, in the way he’d made love to her. Something held back. Something missing.

HIS Choice: An H.I.S. Novel (H.I.S. series Book 2) by Sheila Kell
The Violent Century by Lavie Tidhar
Temptation, Chronicles of the Fallen, Book 3 by Brenda Huber
Baby & Bump (The This & That Series) by Moss, Brooke
The Implosion of Aggie Winchester by Lara Zielin
Burn With Me (Legend of the Sun Whisperers) by Gray, Christle
The Providence Rider by Robert McCammon
Coach: Lessons on the Game of Life by Lewis, Michael
Mana by John A. Broussard
Phoenix by Miller, Dawn Rae