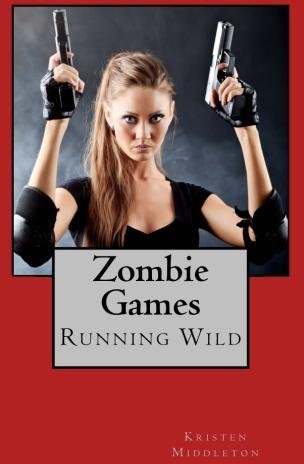 This book is purely fiction. Any resemblances to names, characters, and places are coincidental. The reproduction of this work is forbidden without written consent from the author.

This eBook is licensed for your personal enjoyment only. This eBook may not be re-sold or given away to other people. If you would like to share this book with another person, please purchase an additional copy for each reader. If you’re reading this book and did not purchase it, or it was not purchased for your use only, then please return to Amazon.com and purchase your own copy. Thank you for respecting the hard work of this author

I would like to dedicate this book to my loving family; Dave, Cassie, and Allie. Thank you for your support and patience with me while writing.

I would also like to thank Kristie for allowing me to use her family as an inspiration to create such fun and humorous characters.

Finally, I would like to thank everyone who’s read my first book and has inspired me to keep writing. Without you, the game would be over…

Like most children growing up, I was afraid of the dark. Or, rather, what was lurking inside of it. Every night, I’d insist on having a nightlight in my room and beg my mother to keep my bedroom door open. Most nights, she’d be tucking me into bed, reassuring me that there weren’t any boogiemen hiding under it, nor were there any monsters watching from outside of my window. When that wasn’t enough to satisfy me, she’d sigh wearily, look me straight in the eye and say, “Wild One, your daddy will shoot anyone or anything that tries to harm you, so please, just go back to sleep.”

That statement made perfect sense to me; my daddy
had
lots of guns and he certainly knew how to use them. So, I’d finally relax and fall asleep, content with the fact that he wouldn’t let anything harm me or my sister. Little did I know that my mother’s promise would someday come back to haunt us; when we’d discover that there were indeed monsters and that daddy was only human; he couldn’t protect his daughters every second of the day. This rang especially true when the zombies arrived in Wolf Creek and all hell broke loose.

It had been only four days since our lives were completely shattered. An untested flu vaccine had basically killed most of the population; leaving in its wake horrors that fed upon the rest of us who were struggling to survive. Now, many of my loved ones were missing, including my mother and younger sister, Allie. My dad and I were in the process of preparing to search for them; apparently my sister had been attacked by a zombie and mom had taken her to the only place she could think of for help; the CDC (Centers For Disease  Control and Prevention) in Atlanta, Georgia. Miraculously, some scientists were still alive, racing to fix the mayhem they’d helped to create. Now, ironically, they were our only hope.

“Cassie!” called my father from the kitchen, which was just down the hall from my bedroom.

I was in my bed, lying down with Goldie, a young Golden Retriever puppy I’d helped to rescue a couple of days before. She’d worn herself out by getting into my closet and tearing up some of my old stuffed animals. Not that I cared much; she gave me something I needed right now, a reason to smile. Watching her play, made it happen every time.

I crawled out of my bed and glanced back at her. “You coming with girl?”

She stretched out her front paws, then jumped off the bed and followed me out to the kitchen.

My dad looked up. He was sitting at the kitchen table cleaning some of his guns. Bryce, who’s my karate instructor and the guy I’m hopelessly in lust with, sat across from him, helping.

“So, this is the plan,” said my dad. There were dark shadows underneath his brown eyes and wisps of silvery gray hair near his temples that seemed to have sprouted overnight. “All three of us are going back to my dealership to pick up a suitable vehicle for the trip to Atlanta. I’m thinking a Suburban or an Escalade would be our best bet.”

“Oh? Why can’t we just save time and take the truck you brought home yesterday? That thing would plow through zombies like nothing.”

My dad had borrowed a Sierra from the Chevrolet dealership he works for. He’d been M.I.A. during the initial zombie attacks and I’d almost given up on him until he surprised us all by making it home yesterday.

He smiled at my last comment. “Plow through zombies, huh? Well that may be so, but it’s not big enough to hold everyone. There are what…six of us going? And you can’t forget the two dogs. We certainly can’t leave them behind.”

I raised my eyebrows. “Six of us?”

“Bobby and I are coming with,” replied Bryce, “and don’t forget your personal bodyguard, Austin.”

Bryce was coming with
? I tried not to squeal in pleasure, on account of my dad. He wasn’t aware of my feelings for Bryce and knowing him, wouldn’t be too fond of the idea. My dad was over-protective of both of his daughters and didn’t think any boy was good enough for them.

Bryce was keeping his distance as well. He’d already expressed mixed feelings about starting a relationship with someone who was three years younger and one of his karate students.  His mentors had been strictly against involving one’s self with a student, and Bryce had even received a tongue lashing about flirting with me from the Karate Master a few days before. It hadn’t stopped either of us in weak moments of passion however; we’d shared a few hot and steamy kisses; ones that had left my knees weak and my heart doing flip flops.

Just then Eva entered the kitchen, who I’d known from high school. We weren’t exactly friends and as far as I was concerned she was a selfish and arrogant nitwit who’d recently stolen my best-friend Paige’s boyfriend. Now her newest conquest seemed to be Bryce, who was so naïve about the whole thing. Needless to say, I wasn’t happy that we had to drag her along for the ride. Her mother had also been injured by a zombie, so for now Eva was our problem until we could drop her ass off in Atlanta.

“When did Kristie and the others leave?” she asked yawning. I was happy to see she was wearing a long t-shirt and shorts, not one of her “rub it in your face” expensive designer outfits or short skimpy nighties that left little to the imagination.

“They left a few hours ago. Sara, Megan, and Hannah tagged along,” I answered, pulling my long brown hair into a ponytail.

Kristie had taken her daughters, Paige and Kylie, along with three other survivors to the safety of her mother’s cabin, in Wisconsin. Apparently, the zombies preferred the luxuries of city life a little more than the deep woods.  Unlike our home, the cabin not only had a large generator, but also a good supply of food that could keep them comfortable for a few weeks. We were going to try and meet up with them later and Kristie had given my dad directions.

Eva’s face lit up. “Great. Now I don’t have to put up with Paige’s snide comments. Just because her boyfriend dumped her, doesn’t mean she has to take it out on me.”

I wanted to punch her. “Like you didn’t have a hand in that,” I muttered under my breath.

She apparently heard me because she tried to look innocent but ended up failing miserably. “Well, maybe she doesn’t know how to treat a man. I’m sure Bryce would even agree with me when I say that a guy wants to feel appreciated and not like their girlfriend is always trying to show them up.”

I glared at her, even though I was trying my best to remain calm. I knew exactly what she was referring to this time; Bryce and myself.

“Well, if the guy has enough self-confidence then he wouldn’t feel threatened by his girlfriend’s independent nature,” I snapped.

“How ‘bout those Vikings last season?” interrupted my dad. “Bryce, are you a football fan?”

“Definitely, but I’ve always been more of a Packer’s fan myself,” he replied, loading my dad’s new Berretta. “The Vikings just can’t seem to get their stuff together.”

I cringed. My dad was a
huge
Vikings fan, through and through. I knew that housing a “Packer Backer” would be a thorn in his side.

My dad scowled. “Son, saying anything negative about the Vikings in this house is bad for your health. I’ll let it slide this time, because you’re holding a loaded gun.”

“Oh dad,” I laughed nervously, “you’re such a kidder.”

“Did someone say Vikings?” drawled Austin as he swaggered into the kitchen. “I may be from Texas, but I have to say I’ve always enjoyed watching those guys kick the ball around.”

Austin was the ruggedly handsome military soldier my mother had saved the night the zombies started waking up all over the world. He’d been shot in the shoulder by some hysterical woman, thinking he was trying to attack her. My mother had risked her life by driving him to the hospital and now he felt he owed something to her. This included being my personal bodyguard. Needless to say, Bryce wasn’t exactly thrilled about the idea.

Bryce rolled his eyes. “When do you find time to watch the Vikings Tex? Between sweeping up hay and saving damsels in distress?”

Austin smiled smugly. “What can I say? I’m a man of many talents.”

“Well I for one think that it’s wonderful that you are helping us, Austin,” gushed Eva. “I’m sure Cassie’s mom will be especially delighted to find out you have such a soft spot for her daughter.”

My face turned beet red, I so wanted to hurt her. The truth was that Austin and I hardly knew each other, but she was acting like we had something special going on between us.

“Well,” beamed Austin, “not only is she beautiful, but she has a lot of fire in her belly. This little philly isn’t afraid of anything,” he said staring at me. “If you ask me, it’s quite an honorable trait.”

Everyone turned towards me, their eyes filled with amusement. I just shrugged.

Bryce turned back to Austin and snorted. “Are you referring to Cassie or a horse?”

“Listen up kids, let’s get serious here,” interrupted my dad, I could tell his patience was wearing thin. “There’s only a few hours of daylight left so we’d better get-a-move-on. Austin, you stay here and watch over Eva and the dogs. If everything goes the way that I’ve planned, we should be back in less than two hours with a new vehicle and a full tank of gas.”

“I feel more comfortable coming with,” replied Austin. “I promised your wife I’d stay close to Cassie at
all
times. I’d hate to have anything happen to her. It’s just too dangerous out there.”

Infinity by Andria Buchanan
The Library - The Complete Series by Amy Cross
Volle by Gold, Kyell, Sara Palmer
The Ghosts of Athens by Richard Blake
The Enigma of Japanese Power by Karel van Wolferen
Finnikin of the Rock by Melina Marchetta
Falling For You - January Cove Book 3 by Rachel Hanna
Finn (Blue-Collar Billionaires #2) by M. Malone
Cold Hard Cash: A Story of Erotica by Bebe Wilde
Cayos in the Stream by Harry Turtledove