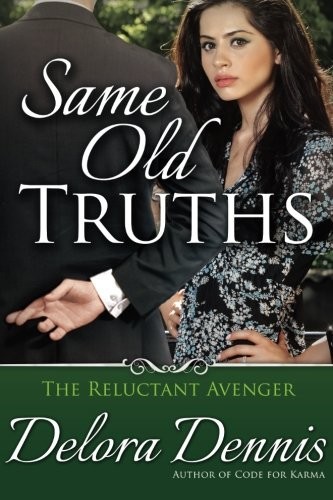 5 - With a Little Help From My Friend

7 - Disappointment, Thy Name is Sapphire Moon

14 - Ignore Isaac Newton at Your Own Peril

Settle down! It’s still early. You don’t want him to find you bleeding.

Every time Kay heard the approach of a car her stomach lurched and she’d jump up to look out the window. This last time she had failed to scoot her chair out far enough and scraped the tops of her thighs on the underside of the table. Trying to enjoy her first cup of coffee of the day was proving to be a lost cause.

As she rubbed her stinging thighs, she peered out over her weedy, unkempt lawn and felt a pang of embarrassment. Why hadn’t she spent a little of her Saturday “policing the area,” as her dad used to say, instead of sleeping in? It wasn’t right to make her neighbors suffer just because she’d lost interest in keeping up any display of neighborhood pride.

I hope he doesn’t notice.

Kay didn’t want to admit it, but she was excited to see him. And way, way down in the furthest reaches of her heart, she secretly hoped he was feeling the same about her. After all, it only stood to reason that two people who had shared a life and two daughters, must surely miss each other from time to time.

But as the time grew closer to his arrival, she couldn’t help feeling a familiar dread and apprehension. It was only natural given all the bombs he’d dropped on her over the years.

Still, she couldn’t shake the foreboding that gnawed at her insides. She was tempted to pacify her anxiety with a healthy slice from the fresh loaf of banana bread sitting in her bread box. Instead, she averted carb overload by running to the mirror to check her face one more time.

Her dark hair (which he used to refer to as “light-black” just to make her laugh) was arranged in thick, soft curls which spilled across the tops of her slim shoulders. She’d been careful not to use too much make up, lest he think she’d purposely dolled-up just for him.

A quick breath into her cupped hand suggested a couple of Tic-Tacs might be in order. She was rooting around in her purse for the mints when the knock at the door finally came.

The two of them stood there on opposing sides of the threshold, looking at each other, not knowing quite what to do next. Dave made the first move with a tentative step forward, arms opened in invitation, causing Kay to reflexively step back in a slight recoil. She was embarrassed (and surprised) at her involuntary rejection of his friendly gesture, but tried to cover it up with an enthusiastic,“come in.” She hoped he couldn’t pick up on her nervousness/excitement (or her bad breath).

“Have a seat,” Kay said, breezily motioning toward the dining room table, flinging the two breath mints she was holding across the room. The sight and sound of those little white pellets ricocheting off her hard Mexican tile in fifteen different directions was just too comical. As gracefully as she could, Kay chased and picked up the errant mints, letting out a little cough to stifle the giggle trying to bubble up out of her throat.

“Sure, that would be great,” Dave said, looking at her contorting face with that expression of annoyance she had come to know so well during their marriage. He took a seat and fidgeted trying to find a comfortable position which was neither too formal or too familiar.

Kay poured him a cup, freshened her own and discretely popped the mints in her mouth. Immediately she felt hair and other unwanted particles on her tongue. With a tight-lipped smile she slid into her chair. Their eyes met for the briefest of moments, triggering an involuntary heart flutter. The big green, puppy dog eyes, rimmed with thick dark lashes had always been his best feature…next to a dazzling Kennedy-esque smile and full head of ash brown hair.

Damn. He’s still got it.

But he wasn’t able to hold her gaze for more than a nanosecond. Kay couldn’t decide if his lack of eye contact was due to guilt or because the sight of her repelled him. Regardless, she took advantage of the moment to discreetly pinch the floor debris off the tip of her tongue.

Once he had given his eyes the appropriate interval of rest, he looked back at her and smiled as he glided the palm of his hand across the surface of the table. “I can’t believe you still have this old table. Does the leaf still give you problems?”

He laughed too and nodded. Then his face turned wistful. “Look at us. Sitting here having coffee. Just like the old days.”

Her heart responded again, but this time it was sadness, not arousal, that caused the sensation in her chest. She was touched by his nostalgia.

He
does
miss us. We really
were
good together
.

Dave let out a melancholy sigh and then launched into a series of nervous, rapid-fire, small talk questions. How are the girls? How are they doing in school? How do they feel about his move back?

Reluctantly, Kay allowed him to lead her away from Memory Lane. She was attempting to answer his questions when her attention got pulled toward something weird happening with his face. It was his turn to respond but his lips weren’t in sync with what she was hearing. It was if she had just walked into the middle of a foreign movie. After a moment of trying to make sense of it, it suddenly became clear. It was a countdown.

“Yeah, we thought it was time to come home since Sandy’s mom is not in the best of health,” he began.

“Of course, the idea of being nearer to the girls and giving Little Dave a chance to have a relationship with his sisters was very important too,” he continued, making sure Kay knew the girls had also been factored into the decision.

“As luck would have it, I was offered a job here that I just couldn’t pass up.”

“The only crappy thing is, salaries being what they are here, I’ve had to take a big cut in pay.”

“So, unfortunately, your child support is going to have to take a cut.”

The mushroom cloud in her head billowed with every pound of her pulse.

Why can’t my intuition be right about lottery numbers, instead of this crap
?

“So, exactly how big a cut are we talking about?” Kay asked, when she was finally able to speak.

He looked her dead-square in the eye. There was a long, uneasy pause. It reminded her of a scene right out of Gunsmoke with Sheriff Matt Dillon standing in the street in front of the saloon facing off against some gunslinger moments before he calls out, “draw!”

“Half,” he finally fired off.

Ah hah!
Now the real reason for his request to come see her had revealed itself and it had nothing to do with working out a new visitation schedule (or seeing her because he missed her).

Hell, we could have easily taken care of this over the phone
.

There was a small (make that teeny) part of her that was impressed with his courage to give her this news in person. It was a far cry from the weasel that had put their five year old daughter on the phone to tell her he was moving out of state and taking his girlfriend, Sandy, with him.

Kay remembered her daughter
’s confused, apologetic,“He won’t come to the phone, Mommy,” when she had asked repeatedly to speak to him.
Maybe he had grown up a little in the last seven years.

Despite his cool, poker-faced delivery, Kay knew he was steeling himself against a potentially-explosive reaction. But she refused to give him the satisfaction.

Two can play that game.
I’ll see your cool and raise you a no-big-deal
.

“I don’t understand,” she said. “Why aren’t you going through legal channels to modify the order?”

Dave scooted his chair closer to the table. “I thought about it, but I just couldn’t see racking up big bills - for both of us - when I knew you and I could work something out on our own.” He gave Kay the kind of smile she hadn’t seen since they were married.

He wants to work something out with me.

This was music to Kay’s ears. Her goal of having a workable relationship with Dave had, up to this point, remained frustratingly elusive. During their years together they had always made such a good team, so she’d never been able to understand why he’d repeatedly rejected her attempts to build a new, post-divorce alliance. Now that he’d finally opened the door, she was determined to make the most of it. This was her chance to finally move forward.

“Well,” Kay began, holding on to
her
poker-face, “I’d be willing to take the cut, if you were willing to help me with the kids. I’m talking about driving them to appointments, picking them up from school when they’re sick, participating in their school activities and whatever else might come up.”

Dave was clearly relieved and Kay felt encouraged to continue. “I’m also going to expect you to help with extras like their school uniforms and supplies. And since I’m carrying them on my health insurance, I think it’s only fair that you split their co-pays with me.” She couldn’t believe how fast these demands were coming out of her mouth.

“Not a problem” Dave said.

“Oh, and as far as the girls’ visitation with you is concerned, you should know Cory has made the decision not to go.” Kay was happy to drop a little bomb of her own.

“And just why in the hell is that?” Dave said. Kay had hit her target.

“Well, I think she’s just trying to exert her independence. You know how teenagers are.”

“She’s not a teenager,” Dave snapped back. “She’s only twelve.”

“You know what I mean. She’ll be thirteen soon and she knows twelve is the age she can no longer be forced to see you.”

“Forced? I’ve
never
forced her to spend time with me. I don’t understand it. We’ve always had great times together. Just ask her.”

Kay didn’t have to ask her. Over the last seven years she had listened to both girls’ constant complaints about their miserable visits with their dad. Summer visits were “miserable” because they had to endure Sandy’s nasty attitude toward them and Dave’s unwillingness to do anything to about it. And their scheduled weekend visits, when Dave flew in to see them, were “miserable” because Sandy accompanied Dave
every single time.
It was clear to both girls Sandy’s mom was the true focus of the visit and not them. They always stayed at Sandy’s brother’s house and had to sleep on the floor. They felt unwelcome and uncomfortable.

According to the girls, on the rare occasion when they were alone with Dave, he’d revert to his old self and the three of them would have a wonderful time. Unfortunately, those times were few and far between. Cory’s impassioned pleas to Dave to come alone, “just once,” were always met with, “it’s not gonna happen.”

The Monsters in Your Neighborhood by Petersen, Jesse
Girls of Summer: In Their Own League by Browne, Lois
Drawn Together by Z. A. Maxfield
Amanda Scott by The Bawdy Bride
1066 by Andrew Bridgeford
Uncle Dynamite by P.G. Wodehouse
Never Run From Love (Kellington Book Four) by Driscoll, Maureen
Wizard's Heir (A Bard Without a Star, Book 1) by Michael A. Hooten
The Girl Who Fell From the Sky by Simon Mawer
THE ROUGH MATING OF A VAMPIRE (The Vampire Coalition: A Short Prelude) by J. S. Scott