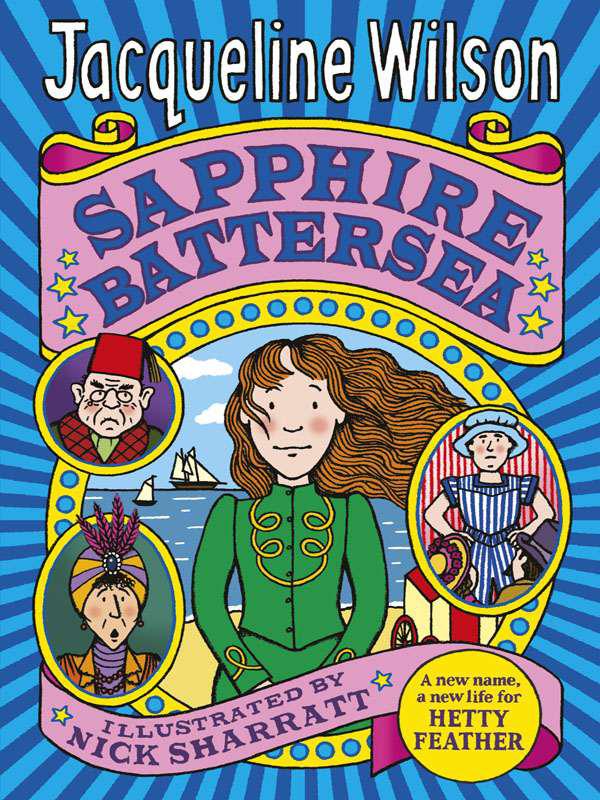 Hetty Feather was given her name when she was left at the Foundling Hospital as a baby. But she always longed to be named after her incredible sapphire-blue eyes. When she is reunited with her mother, she hopes her new name, Sapphire Battersea, will also mean a new life. But things don’t always go as planned …

Follow the twists and turns of Hetty’s adventures as she begins work. She longs to be reunited with her dear Jem, but also finds a new friend, Bertie the butcher’s boy. Despite her hopes for the future, Hetty’s life seems likely to take a darker path. Can she cope with the trials ahead?

Enjoy Jacqueline Wilson writing at her very best in this moving sequel to the hugely acclaimed Hetty Feather. 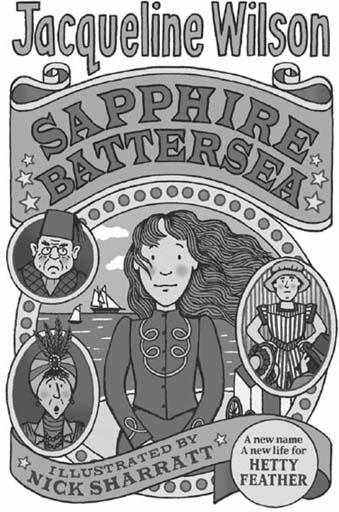 DOUBLEDAY
For my two best girls 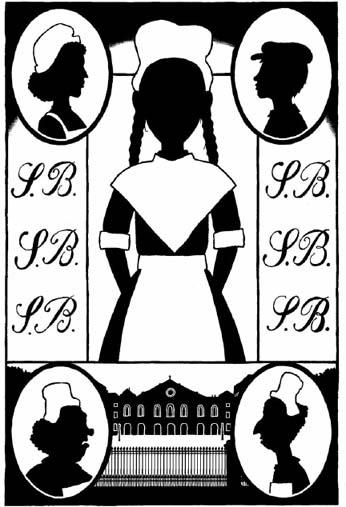 MY NAME IS
Sapphire Battersea. Doesn’t that sound beautiful? I write it over and over again on the covers of this private notebook. I stitch a secret S.B. inside the neck of my uniform. I stir a swirly S.B. into the soup when I am helping the cook. I scrub a soapy S.B. when I am cleaning the floor. I whisper my own name in bed at night in the freezing dormitory, and my breath rises and forms the letters in the dark.

I am Sapphire Battersea, but nobody calls me by my real name, not even my dear mother. Mama chose to call me Sapphire because my eyes were so blue when I was born. But even she calls me Hetty now.

‘I’m
not
Hetty. It’s such a stupid name. It’s just a hateful foundling label. I
hate
the way they change all our names, making them up randomly. They don’t sound like real names. Hetty Feather! It’s ridiculous.’

Poor Grizel is a girl in little Eliza’s year at the Foundling Hospital. Everyone calls her Gristle, and consequently she is always a grump, like her name.

‘Sapphire is so elegant, so romantic. It’s a perfect name for a writer,’ I said, signing it in the air with a flourish.

‘Let us hope you become one, then,’ said Mama, a little tartly.

‘You wait and see. I will publish my memoirs and make our fortune. Miss Smith will help me. My story will be turned into a proper book with gold lettering and a fancy picture on the front, just like all her own Sarah Smith stories published by the Religious Tract.’

‘I’m not sure
your
stories would be suitable for a religious press, Hetty,’ said Mama, laughing.

‘
Sapphire!
Why won’t you call me by my true name – the one you chose for me?’

‘I always call you Mama when we’re alone,’ I said, a little hurt.

‘Yes, but I wish you wouldn’t. It’s tempting fate. One slip in front of the others and we’re done for,’ said Mama, and she pulled me close.

‘I will never slip, Mama,’ I swore fervently. ‘No one will ever find out that you are my real mother.’

I hadn’t known myself for the first ten long years of my life. Poor Mama had been forced to give me to the Foundling Hospital when I was a little baby because she had no means of supporting me. I was soon fostered out to the country. I lived with a kind family. I loved my foster mother and father and all my foster siblings. I especially adored my foster brother Jem.

I had hero-worshipped him. I treasured the silver sixpence he’d given me when I was taken off to the Foundling Hospital at five. He promised he’d wait for me and marry me one day. I was so little and stupid I actually believed him – until young Eliza arrived at the hospital from the same foster home five years later. She prattled away about
her
dear Jem. I found out that he’d made exactly the same empty promises to her. I couldn’t forgive him. I decided to put him out of my mind for ever.

I had found the rigid life of the hospital horribly hard. Some of the nurses were kind, but the two matrons were excessively cruel. I suffered from the attentions of Matron Pigface Peters when I was small, and of Matron Stinking Bottomly when I went into the Seniors. They each went out of their way to punish and humiliate me. I hated them both.

I found it difficult to make friends with the other girls too. I made downright enemies of Sheila and Monica. When Polly came to the hospital, we were
like
soul mates, but she was adopted by rich folk and we never saw each other again.

My only true friend was Ida, the kitchen maid. I ran away from the hospital on Queen Victoria’s Golden Jubilee – and when I came back, Ida was so overwhelmed that she called me her own child when she hugged me. I could scarcely believe it! Ida was my true birth mother. She had skivvied and slaved at the Foundling Hospital for years just so that she could get a glimpse of me every day. She’d slip me an extra potato at dinner, or sprinkle secret sugar on my breakfast porridge. She’d always had a smile or a kind word, and helped me to blossom in that bleak institutional world.

When I became aware of the wondrous truth of our relationship, my whole life changed. I cannot say I became an exemplary foundling. Whether I am Sapphire or Hetty, I still have a temper that lives up to my flaming red hair. But whenever Matron Stinking Bottomly slapped me for impertinence and forced me to scrub the whole length of the hall, I knew Mama was nearby, watching and waiting, burning with sympathy. She’d catch my eye across the crowded dining room at mealtimes, and I’d feel calmed.

Sometimes, when everyone slept in the dormitories, I dared creep right out of the door, along the shadowy landing, down, down, down the great
stairs
, through kitchens that still smelled of stewed mutton and rice pudding, along the winding corridor to Mama’s own tiny bedroom. I’d push open the door and she’d leap up from her bed and hug me hard. We’d sit together and whisper well into the night. Sometimes we’d lie close together on Mama’s narrow bed, clasping each other close. I’d trace her dear face in the dark and she’d wind my long plaits around her own neck. We’d feel utterly united, making up for all those many years we’d lived apart.

But then – oh, I can hardly bear to write it. It was all because of Sheila. She was always a light sleeper. She must have woken when I crept through the long dormitory. She didn’t call out. She lay there, waiting, and then slid stealthily out of her bed, intent on following me, the sly cat. She was so furtive and silent on her bare feet that I didn’t hear her padding behind me. I didn’t notice the creak of the stairs as she followed me down to the ground floor.

She stole along behind me all the way to Mama’s room. I wonder how long she waited outside, her ear to the door? She suddenly burst in upon us, as Mama and I cuddled close in a fond embrace, clearly visible in the flickering candlelight.

‘Whatever are you
doing
, Hetty Feather!’ she exclaimed. ‘Why are you lying there with
Ida
?’

‘Go away! Get out! Get out of Mama’s room!’ I cried in furious passion.

‘It is just Hetty’s little game,’ Mama said quickly, giving me a shake.

But Sheila was no fool. ‘You are Hetty’s
mother
?’ she said.

‘No! Like Ida said, it’s just my silly game,’ I declared, springing off the bed.

Sheila was still staring, open-mouthed. ‘Yes, now I see it!’ She darted between us, staring rudely. ‘You two
are
alike. You’re both so small and slight – and you both have blue eyes. Oh my goodness, how extraordinary! Have you known all this time, Hetty? I’d never have thought you could keep such a secret so long,’ she said.

It was no use denying it further.

‘It’s the most private, precious secret! If you dare breathe a word of this to anyone, I’ll tear out your tattle-tale tongue and feed it to the pigs,’ I said.

‘Temper temper!’ said Sheila, eyes gleaming. ‘So, what will you do for me to keep me sweet and silent?’

‘This isn’t a schoolgirl game, Sheila,’ said Mama, getting out of bed and gripping her by the shoulders. ‘I haven’t lived this life year after year to have it carelessly destroyed by a spiteful girl. You
mustn’t
tell a soul. If those matrons find out, then we’re done for. Swear that you’ll keep silent!’

Ghost Sniper by Scott McEwen
Scarlett's Letter (Touched by a God #1) by Ellie Keys
Hauntings and Heists by Dan Poblocki
Beguilement by Lois McMaster Bujold
Beauty Chorus, The by Brown, Kate Lord
The Sad Tale of the Brothers Grossbart by Jesse Bullington
Heartbreak for Dinner: It's Kind of a Long Story by Rondon, Annah
Dry Bones by Margaret Mayhew
By the Rivers of Brooklyn by Trudy Morgan-Cole
Jefferson's Sons by Kimberly Bradley