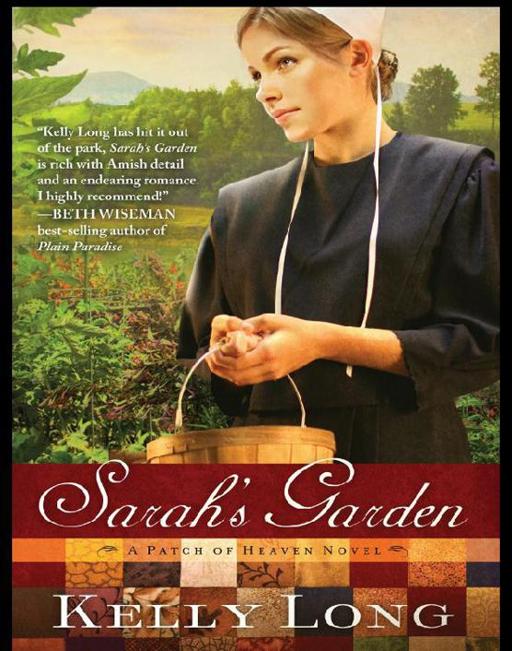 S
ARAH’S
G
ARDEN
© 2010 by Kelly Long All rights reserved. No portion of this book may be reproduced, stored in a retrieval system, or transmitted in any form or by any means—electronic, mechanical, photocopy, recording or any other—except for brief quotations in printed reviews, without the prior written permission of the publisher.

Thomas Nelson, Inc., titles may be purchased in bulk for educational, business, fund-raising, or sales promotional use. For information, e-mail [email protected]

This novel is a work of fiction. Any references to real events, businesses, organizations, and locales are intended only to give the fiction a sense of reality and authenticity. Any resemblance to actual persons, living or dead, is entirely coincidental.

For Brenda. who would not let me quit.

Englisch:
non-Amish people and their ways
Es fenschder muss mer nass mache fer es sauwer mache:
One has to
wet the window in order to clean it.

Wann er schnarit, halt er much waker:
When he snores, he keeps
me awake.

Was in der welt?:
What in all the world?

I
n researching this novel, I discovered the fact that Amish communities differ from one to another from both simple to larger-life activities. For example, there are dialectal differences in the spelling of such words as “dawdi” house, which may also be spelled “doddy” or daudi” depending on the region in question. In addition, praying aloud at the dinner table may also, at times, be a voiced prayer when there is a particular praise offered.

The Amish man who was my main source of information, the truly forthright and dry-humored Dan Miller, told me that it would be difficult to find two Amish communities exactly alike. While all may share basic beliefs in the Lord, family, and work ethics, diversity still exists.

It is a lesson to me as an
Englischer
, that though the Amish may appear to live “the simple life,” their differences provide a rich culture for both fact and fiction, and it is my honor to represent some small threads of their ways of life.

L
etty King chopped zucchini on a wooden board and scraped the skins to one side to be fried as a side dish for dinner. She grated the dense centers into neat piles and glanced out the small kitchen window. Her husband, Ephraim, was spending a rare few minutes with their toddler, Sarah, staking up tomatoes in the kitchen garden. When Letty finished her task, she covered the vegetables with a damp tea towel, praised the carrots her five-year-old daughter, Chelsea, was busy scraping, and ventured outside for a stray moment of pleasure in her husband’s company.

Ephraim’s brown eyes greeted her with warmth, and then he glanced down to where two-year-old Sarah touched the tomato vine.

“
Ach
, Letty,
kumme
and see; our Sarah loves the plants like I’ve told you.”

Letty smiled ruefully and moved to pat her younger daughter’s crop of fine, blonde curls. “Ephraim, you haven’t shown any of the other
kinner
this kind of notice. You will turn Sarah’s head for sure.”

Ephraim laughed aloud. “
Nee
, Letty. It is not me;
Der Herr
has given her a gift. The Lord, Letty. Even now, she knows how to touch a plant, to nourish it.”

“Perhaps, but Ephraim, is it seemly to draw attention to the child?”

“It is not Sarah I draw attention to, Letty. It is
Der Herr
whom I honor through the child. It is the Lord working through her whom I praise.”

Letty sighed. “That’s true, but now I must change her
windel
before the others return from school.” She scooped up the baby and patted her damp cloth diaper as the toddler’s lip puckered and she stretched over her mother’s shoulder for the vine.

Ephraim made a soothing sound in his throat as Letty carried the baby away.

When Letty reached the house, she sneaked a brief glance back to find her husband still studying the plants. She sighed to herself and went inside, closing the blue door firmly.

S
arah King passed the mounded dish of mashed potatoes to her older sister, Chelsea, then caught up the bowls of boiled turnips and fried apples to bring to the table. It was nice to have Chelsea visiting. It was her first long visit home since her wedding to John Kemp five months earlier, and having her there certainly helped when it came to feeding her three brothers. Twenty-year-old Sarah felt that being the youngest of five was not always easy, especially when spring planting came around and the boys were ravenous from working the fields from sunup until dark.

Sarah caught her mother’s approving eye at the food-laden table and slipped into her own place on the long bench at her father’s left hand. She folded her hands into the lap of her apron and bowed her head. The general rumble of male voices ceased as her father began to pray.

Der Herr sie gedankt
for this food and for those who have “labored over it, from the fields to the table. Amen.”

There was a chorus of amens, and the boys dove for the food.

“
Ach
, I nearly forgot . . .” Father held up his hand, and the boys froze in their scoops with the ladles and spoons. They dropped them with a low groan when Father bowed his head once more.

“And
Der Herr sie gedankt
for Chelsea and for the
boppli
she carries for John Kemp.”

Sarah smiled. A baby! She should have known, since Chelsea had been closeted with
Mamm
and Father for a hurried conference in the pantry just before serving time. Her brothers patted John on the back and made good-natured jokes while Chelsea glowed and met Sarah’s eyes. Sarah knew that many in her Old Order Amish community did not speak of pregnancies openly, but Father and
Mamm
encouraged conversation of all sorts in the privacy of their home in an effort to keep the family together in spirit and prayer.

Sarah was so excited at the prospect of being an aunt that she forgot to eat. Father jokingly nudged her arm and set the whole table laughing at her untouched plate. Sarah joined in the laughter, though she would not have laughed as outrightly had she been anywhere but home with her family. She gazed down the table to the tanned faces of her older brothers and the always-moving gentle hands of
Mamm
and thought how blessed she was.

“And,” Father pronounced, startling her, “I think that Sarah might make the baby quilt for my first grandchild. What do you say, Sarah?”

Sarah ducked her head at her father’s words. She knew he only made an innocent suggestion; it was her own insecurity about extending her creativity beyond her garden that shook her. She had only attempted one quilt, when she was thirteen, and her
Grossmudder
King had so criticized her handiwork that she ’d never picked up a needle again. But the table was waiting for a reply, and she nodded.

Chelsea rose and came around the table to kiss and hug her sister. “
Wunderbaar
,” she exclaimed and returned laughing to her seat.

Sarah smiled and adjusted her hair covering, tucking back the stray blonde strands that tended to escape at her temples.

Her brother Luke stopped eating and opened his eyes wide in a comedic manner, which grabbed everyone’s attention.

“
Was in der welt
, Luke?”
Mamm
asked in mock exasperation.

“I just thought of something,
Mamm
!” Luke exclaimed. “Now that Chelsea is married and working on the Kemp farm, she won’t be able to run the roadside stand. And it’s supposed to open again next week! Who will take care of the stand this year?”

The table rumbled in perplexity, and Sarah bit her lip in thought. The King family roadside stand was no mere plank of wood on sawhorses. Indeed, Father and the boys had built a full-length, open-fronted shed, well shingled against the weather and able to house many tables of produce, baked goods, and canned items in the spring and summer as well as baskets of walnuts, beechnuts, scented pine cones, and bundles of firewood in the autumn. It was a source of income for the family and was the most successful of all the roadside stands in the local Amish and English communities. To spare a boy from the fields would be unthinkable, and Chelsea was busy on the Kemp farm.
Mamm
had all of the housework . . .

“Your mother and I have thought of this, eh, Mama?”

Mamm
cleared her throat and folded her cloth napkin before replying. “
Jah
,” she announced. “Sarah will take over the running of the stand when it opens again next week.”

The sudden silence around the crowded table did nothing to ease Sarah’s swimming head as she stared at her mother in confusion. Father took up the conversation and reached to pat Sarah’s cold hand in reassurance. “
Jah
, Sarah will do it.”

Luke laughed aloud—a brief chortle cut short by a glare from his mother—and then looked apologetically at his younger sister.

“Forgive me, please, Sarah. It’s just that you’re always with your plants . . . I just thought . . .” His words trailed off and Sarah felt a quick wash of pity at his floundering.

“It doesn’t matter, Luke. It’s strange for me to think of it also,” Sarah admitted.