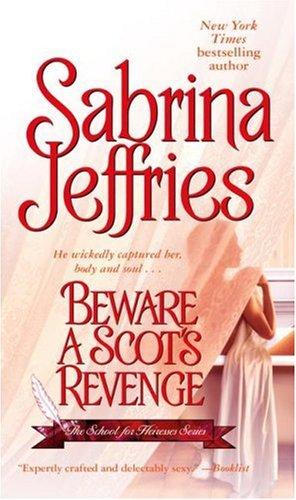 School For Heiresses 3- Beware A Scot's Revenge
Jaquette du Livre
Tags:
Sabrina Jeffries
SUMMARY:
"Someone's going to call your bluff someday, Venetia -- you'd better hope it's not a handsome man."-- Mrs. Charlotte Harris, headmistressLady Venetia Campbell's visit to her childhood home in Scotland takes a dramatic turn when she's kidnapped at pistol point by her father's sworn enemy. Sir Lachlan Ross is widely feared in his guise as The Scottish Scourge, but Venetia remembers her former neighbor as a handsome youth whose attentions she craved. Now a wickedly sexy man, Lachlan's appeal is even more intoxicating...and much more dangerous. Though Lachlan tries to treat her as his foe, his scorching kisses tell another story. And despite his plan to use her as a weapon against her father, Venetia is determined that Lachlan's lust for revenge will be trumped by an even more powerful desire....
Generated by ABC Amber LIT Conv
erter, http://www.processtext.com/abclit.html

and her sparkling, sexy series

The School for Heiresses

“Jeffries carries off this cat-and-mouse game of mutual seduction so cleverly that you’ll be turning the
Generated by ABC Amber LIT Conv
erter, http://www.processtext.com/abclit.html
pages at lightning speed…. Warm, wickedly witty and brilliantly plotted, this is a must for anyone who just wants a fast, intelligent read.”

and her previous works of fiction

“Anyone who loves romance must read Sabrina Jeffries!”

One Night with a Prince

“Jeffries not only beguiles readers with scenes of passion and vivid characters but steadily builds the story’s tension to an exciting conclusion. The details of gambling, mistresses, and scandalous conduct further enrich the tapestry against which this emotionally satisfying story plays out. Jeffries’s readers will be royally pleased.”

To Pleasure a Prince

“Jeffries’s sparkling dialogue takes center stage in an emotional, highly sensual and powerfully romantic story…. All the characters have such depth they simply leap from the pages.”

“[The] parallel courtships of the Tremaine and North siblings engages throughout. Readers will eagerly await the third brother’s story.”

In the Prince’s Bed

“A traditional Regency told with sparkle and energy…. The chemistry among all the characters—not just the hero and heroine—ensures that there’s never a dull moment in this merry romp…. Fans of historical romances will find the simple pleasures of this novel irresistible.”

“Delightful, sensual, and poignant, Jeffries’s latest brings humor and pathos to a richly peopled tale. This is a delightful start to a new series featuring a trio of heroes to die for.”

The School for Heiresses

Only a Duke Will Do

One Night with a Prince

To Pleasure a Prince

In the Prince’s Bed

POCKET BOOKS, a division of Simon &

This book is a work of fiction. Names, characters, places, and incidents are products of the author’s imagination or are used fictitiously. Any resemblance to actual events or locales or persons, living or dead, is entirely coincidental.

All rights reserved, including the right to reproduce this book or portions thereof in any form whatsoever. For information address Pocket Books, 1230 Avenue of theAmericas ,New York,NY10020 ISBN: 1-4165-6154-4

POCKET and colophon are registered trademarks of Simon & Schuster, Inc. Visit us on the World Wide Web:

http://www.SimonSays.com
To Dougie MacLean, Capercaillie, Keltik Elektrik, Peatbog Faeries, Ashley MacIsaac, and countless other Scottish bands and musicians whose music inspired me through the writing of this book.

Many thanks to Sally Avelle, for her invaluable

I used every single one doing my research.

I hear that your former pupil, Lady Venetia, has once again refused a perfectly good suitor.
Speaking as a disinterested observer, I believe the lady may have taken your rules for heiresses
too much to heart. If she isn’t careful, it will gain her nothing but a lonely spinsterhood.
Your cousin,

D
aughtersare a plague upon men.

Generated by ABC Amber LIT Conv
erter, http://www.processtext.com/abclit.html
So thought Quentin Campbell, the Earl of Duncannon, whose twenty-four-year-old daughter was giving him fits. He’d hoped that Mrs. Charlotte Harris’s School for Young Ladies would teachVenetia to be malleable, but it had just made the lass more impudent. Apparently she’d inherited not only her mother’s lovely features, but also her stubborn temperament. And he’d damned near had enough. He found her in the kitchen of theirLondon town house, preparing that vile medicinal concoction she loved to pour down his throat. “How dare you refuse the viscount’s suit after I gave him leave to court you?” he blustered.

Cool as a Highland loch,Venetia continued pounding a purplish flower into powder. “If you’d consulted me before you gave him leave, Papa—”

“Consulted you! And given you a chance to pick apart yet another fine fellow?” He stifled an oath.

“What offended you this time? His charming manner? His too broad smile? His well-groomed appearance?”

“I don’t like him,” she said with her usual maddening half-smile.

“Don’t like him! He’s fashionable and handsome, with fortune to spare—”

“So is my reticule.” She poured the purple powder into a glass of water and stirred. “Unfortunately, it also has more personality, and nearly as much intelligence.”

This
was the trouble—his daughter’s wit ran men off.

“My lord?” said a voice from the doorway.

He glanced at his butler. “What is it?”

“A Mr. Sikeston and some other men are asking to see you.”

He tensed.Sikeston and his men were
here
, inLondon ? Something must have gone horribly wrong. “I’ll meet with them in my study.”

As the butler hurried off, Quentin shot his daughter an exasperated glance. “You’ve gained a reprieve, lass. We’ll discuss the viscount further at dinner.”

Concern shone in her eyes. “Are these men here about the Scottish Scourge, Papa? You know what the physician said—you mustn’t let yourself be provoked.”

“Physicians, ha! Fools, all of them. What do they know?”

“They know enough.” She held out the glass. “You should drink your tonic before you see anyone.”

“I don’t want my tonic, damn it!” She was always trying to coddle him. He needed to be firmer with her, as he hadn’t been with her late mother, but on days like today, when she reminded him so powerfully of Susannah, it was damned hard. “Leave the men to me, ye ken? And don’t be worrying your head over them.”

She turned stubborn. “At least let me help you up the stairs.”

Generated by ABC Amber LIT Conv
erter, http://www.processtext.com/abclit.html
When she tried to take his arm, he wrenched free, horrified by the very thought of his pretty daughter going near the blackguards awaiting him. “It has naught to do with you, so stay out of it!”

His vehement protest made her wince. “Fine, do as you please.”

He started to apologize, then caught himself. This was important. He couldn’t let her stick her nose in his business this time.

Pausing every few steps for breath, he made his slow way up the stairs. Damn Sir Lachlan Ross and his shenanigans—why couldn’t the divil leave him be?

He should have known he was in trouble from the day Ross first appeared inLondon . The young baronet had demanded what he thought was due his family and the Clan Ross, and Quentin had dismissed the laird’s claim, determined never to reveal the ugly secrets of his past, to Ross or anyone else.

Since then, he’d paid dearly for his silence. The insolent young clan chief had begun riding the roads as the Scottish Scourge. Stirring up trouble, Ross was, trying to force Quentin’s hand. He robbed Quentin’s friends when they strayed intoScotland , telling them to turn for recourse to “Lord Duncannon.” Though he’d repaid their losses, it was humiliating that he couldn’t explain why the man might be robbing them, not without raising questions he refused to answer.

Quentin had endured five years of this, hoping Ross would eventually tire of the game. Then Ross had brazenly robbed Quentin’s own factor on his way to deposit the rents. His rents provided half his income, for God’s sake! At this rate, the man would bankrupt him. So he’d hiredSikeston , an action he already regretted.

Entering his study, Quentin surveyed the grim faces of the men assembled there. “I told you never to come here.”

“We had no choice,”Sikeston said. “We’re fleeing for our lives.”

That took him aback. “From whom?”

Ross’s estate. Damn. He should never have told them who he thought the Scourge really was. “You were supposed to catch him in the act and beat some sense into him so he’d stop this nonsense. Not waylay him among his own people.”

“We tried, damn it!”Sikeston cried. “But he didn’t take the bait, no matter how much of your gold we spent or how many inns we went to, bragging of being your friends on holiday.”

“We think he has an accomplice,” another man put in. “Someone inLondon who knows your friends and tells him who to attack and when.”

“Or else he’s canny enough not to fall for fools pretending to be gentlemen,” Quentin snapped. He should have hired more sophisticated men, but how was he to find them? He’d had enough trouble finding these.

“We didn’t have an easy time at his estate, neither. His clansmen don’t seem to know that their chief is
Generated by ABC Amber LIT Conv
erter, http://www.processtext.com/abclit.html
the Scourge,”Sikeston said. “They worship the man and will go to the death for him. We couldn’t even discover where he spends his nights, though it’s not at Rosscraig. He’s like a wraith, slipping in and out of that estate, always surrounded by his men—”

“That’s why I haven’t gone to the authorities. His clan would close ranks about him.” No matter how convinced Quentin was that Ross was the Scourge, proving it wouldn’t be easy. With Ross being Quentin’s neighbor, the authorities would assume their quarrel stemmed from a property dispute. And if anyone started investigating and discovered the truth…

He shuddered. “So you couldn’t lure him out.”

“We did,”Sikeston put in. “But only by blackmailing a clansman to find out where he’d be. Then everything went to hell once we caught up with him.”

Quentin glowered at him. “Because he set his clan on you?”

“No. We gave him the beating like you paid us to do.”Sikeston exchanged an uneasy glance with his men. “But…um…well—”

“Spit it out, man, for God’s sake!” Quentin snapped.

“We killed him, my lord. Sir Lachlan Ross is dead.”

It took a moment for the words to register. Then Quentin felt the room sway around him. Surely he couldn’t have heard right. “You killed him?”

“It wasn’t our fault,” another man said. “When we jumped him on the bridge, he was armed with a knife. If Johnny here hadn’t laid a cudgel to his head—”

“A cudgel!” Quentin thrust his face inSikeston ’s. “I told you I only wanted him roughed up a bit!”

Sikestonglared at him. “Indeed you did, my lord, but you weren’t there. Ross is built like an ox and fights like one, too. He also used to be a soldier, something you forgot to mention when you hired us.”

Quentin had been afraid they would refuse the job if he told them. Biting back an oath, he stared atSikeston . “So the blow killed him, did it?”

“If it didn’t, then the water did. After the man was struck, he fell over the rail and into the loch.”Sikeston

Desired By The Sacred Alien (Sci-Fi Alien Romance) by Meg Ripley
The Affair of the Bloodstained Egg Cosy by James Anderson
Ransom by Sutherhome, Erica
Sara Morningsky by Lee Driver
Angels of Destruction by Keith Donohue
Crimes of August: A Novel: 5 (Brazilian Literature in Translation Series) by Rubem Fonseca
Gambling On a Heart by Sara Walter Ellwood
Weapons of Math Destruction: How Big Data Increases Inequality and Threatens Democracy by Cathy O'Neil
Coming Home for Christmas by Carla Kelly
Jack by the Hedge (Jack of All Trades Book 4) by DH Smith