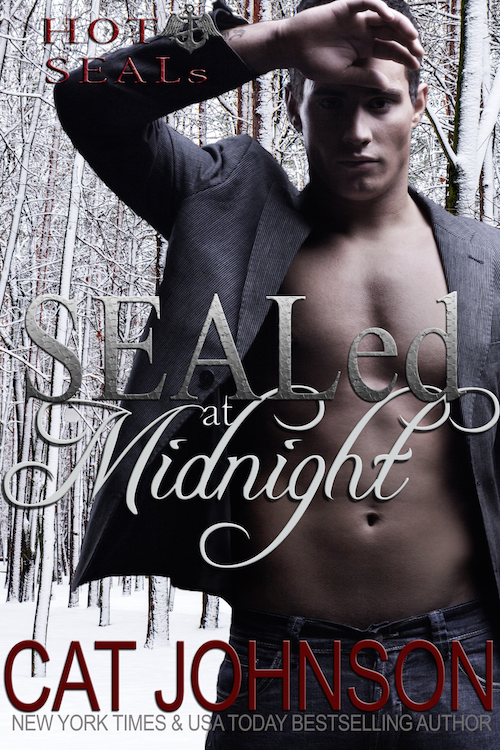 As a combat hardened Navy SEAL, Thom Grande has fought terrorism around the globe, but he can’t fight is his ex-wife. Or her lawyer. Or the alimony payments. Just when he thinks his life can’t get any worse, bad luck smacks him up side the head—literally. Now, he’s got a traumatic brain injury and can’t remember his own name. The good news? He can’t remember his ex or the woes she’s causing him either.

Virginia Starr has the worst luck ever with men. But maybe her luck is changing because one hell of a hot man just showed up at her door in the middle of the night. One problem—he can’t remember anything, including who he is. The more Ginny sees, the more she realizes, that might not matter all that much.

“Do you remember what happened to you?”

“Most of it. I remember my SUV skidding off the road, but I have no recollection of actually crashing or anything else until you found me outside.”

Not really, but he probably had more experience with traumatic brain injury than she had.

“I remember some other things too.”

“I have two kids. Jason and Juliette.” He watched her react to that.

Her surprise was apparent before she hid it. “Two kids. That’s great.”

“Oh.” That one syllable seemed ripe with so much. “Do you, uh, have a girlfriend you need to call?”

He might be rusty and a little bruised around the edges from the divorce, but he knew when a woman was fishing for information and Ginny was.

“Oh. Okay. I just wanted to check. You know, didn’t want anyone to worry.”

He smiled. “Thank you for worrying about me.”

“Sure. Anytime. I’m just glad you’re feeling better.” She bit her lip as she raised big brown eyes to look at him.

That did nothing to help the situation in his boxer shorts. The way he was positioned, so close, touching her, there was no way she’d missed feeling it.

“Good.” Her eyes narrowed as her gaze dropped to his lips for the briefest of moments.

His SEAL training had taught him to read people. Informants. Terrorists. He could detect lies and threats, but that skill transferred beyond the counterterrorism world.

If he wasn’t completely off base, Ginny wanted him as much as he wanted her.

He couldn’t seem to get the words out at first. He lifted one hand to cup her face, running a thumb across her bottom lip as he leaned in. “Tell me if I’m out of line here.”

Her throat worked as she swallowed. “You’re not out of line.”

The din inside the Black Hawk made normal speech impossible. That was perfect, in Thom Grande’s opinion.

In the midst of the deafening noise, he could finally find some peace and quiet. His teammates couldn’t ask him how he was doing. He couldn’t be tempted to complain to the guys about how shitty things actually were . . .

And things were shitty, make no mistake about that.

Never in his life had he ever believed that he’d be where he was now. No, he wasn’t talking about the fact he was inside a UH-60 packed with SEALs on the way to a mission.

That
he’d always known he’d do. From the moment he was old enough to know what a Navy SEAL was Thom knew he wanted to be one.

It wasn’t where he was at that moment, or in his career, that baffled him. It was the rest of his life that was fucked up.

A complete and utter mess.

Never did he imagine that at twenty-eight years old he’d be divorced and thanks to that divorce, impoverished, alone and lonely. Sleeping in the bachelor barracks for lack of anywhere else to live now that his wife had his house and most of his money. Not to mention control of where and when he could see his two kids.

Unlike his buddy, and a lot of the other guys who found the noise and vibration of the helicopter soothing, the ride didn’t lull Thom to sleep. He wished it would.

Then again, he didn’t sleep well in his own bed either so he shouldn’t be surprised he’d be awake now.

The Black Hawk dipped, rocking him where he sat. It was no worse than the turbulence you’d experience in a fixed wing aircraft, but in this bird it happened a lot more often, caused by the normal lifting and dropping from the blades.

The other difference was, unlike in a commercial aircraft, there was no seatbelt to secure Thom during flight. In fact, there were no seats at all.

The seats had been removed to accommodate the personnel and equipment for the mission. Guys were stretched out all over the deck of the bird, asleep. Those who couldn’t sleep, like Thom, got numb asses from sitting on the hard surface.

On a longer flight, he would have taken a sleeping pill. This flight was too short to risk taking anything that would make him groggy, so he remained awake and dealt with it.

Physical discomfort was part of the job. He was used to that after all the years he’d been in the military.

The sore ass and lack of sleep would be well worth it if the team achieved their goal on this mission. That goal being the capture of the hooded ISIS executioner responsible for the unconscionable beheading of three American and two British hostages.

Thom willingly and knowingly put himself in harm’s way when he’d chosen to enlist in the Navy at eighteen. And then again when he tried out for the SEALs.

These men who ISIS, also known as ISIL, had ordered to be savagely killed hadn’t. They were journalists and aid workers only in Syria to help people. They weren’t the enemy. They weren’t there as fighters. That made the killings even more heinous.

Countless hours had gone into discovering the identity of the killer, Jihadi John. The nickname had been given to the executioner by the British press, and had been adopted by the coalition military who vowed to find him.

FBI experts and computer programs searched through massive amounts of data, taking what little information they had from the videos and looking for a match in databases of known Jihadists.

The details they had to work with were limited but telling. His voice, bearing a distinct British accent. His eyes, visible above the mask. His height and build, even the pattern of veins on the back of his hands . . .

Given all that, as of September the experts were finally convinced they knew his identity. More importantly, they believed they’d located him.

But Thom was well aware that intelligence had been wrong before. The failed mission to save the hostages before the first beheading was one of those times. When Special Forces arrived at the location where the hostages were supposed to be, they weren’t there.

On the other hand, intel had in past been dead on, as in the case of the successful raid that took out al-Qaeda leader Osama Bin Laden in his compound in Abbottabad.

Thom could only hope the intelligence for this mission was accurate. That Jihadi John was right where the experts said he’d be.

Under cover of darkness, the helicopter would set down outside of the city just long enough for the team to unload. They’d patrol to the compound, locate, and then gain access to the building where the target was believed to be hiding.

Infiltrating would be easy. It was the exfil that would be tricky. They’d have to be quick. There was no hiding a Blackhawk in that environment. The pilot and crew would have to come back for them at the specified time, hoping the team would be at the set point with the target in hand.

The goal was to get in and out with the least amount of conflict and notice. The many coalition airstrikes against ISIS to date only angered the group and spurred backlash.

Airstrikes in this case were a weak offense. Too imprecise. The results too uncertain. Unproven. Even the experts couldn’t confirm or deny if the leaders targeted had been taken out by the strikes.

This, what the counterterrorist-focused SEAL teams trained within the Naval Special Warfare Development Group could accomplish silently and precisely, was what it would take. It was the best way to achieve their goal and obtain their target with complete and absolute certainty.

If possible, they were supposed to bring him back alive to face trial for his crimes.

Of course, deadly force was sanctioned should the target pose a threat. Thom could only hope the man pulled a gun, that the bastard would give him a reason to put a bullet in his head.