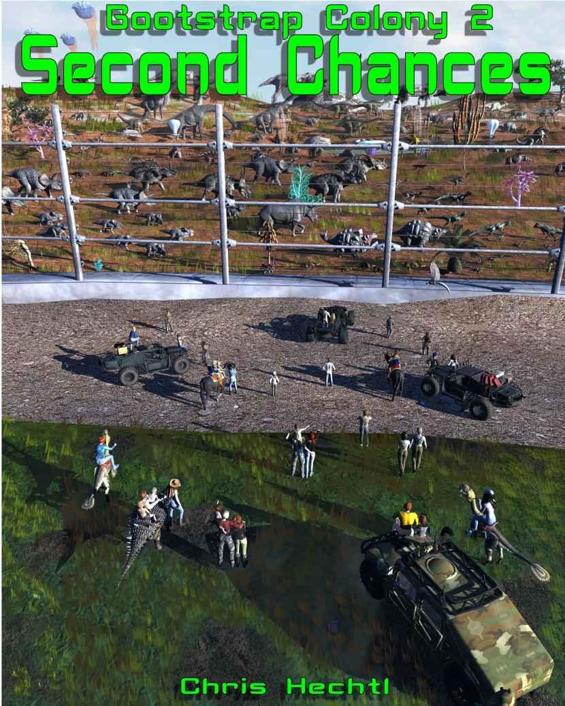 All rights reserved, including the right to reproduce this book and or portions thereof in any form.

This is a work of fiction. All the characters and events portrayed in this book are fictional. The exception is Dr. Bowyer who graciously gave his permission to use his name and his work in this book. Any resemblance to other people is purely coincidental.

I'd like to thank Rea and all the beta guys, plus the fans for putting up with my writing style. It is getting better! Honest! I think... :)

I'm trying something different here. The following is a series of short stories followed by the main story, which picks up where the first book left off. That way you, the reader, get some back story to soak up until we finally get to the main story. Oh, if you missed it, go pick up a copy of “Multiverse 1.” It has a short story for this universe as well, which will tie into this somewhere below. :)

John Duster petted his partner, caressing his ears gently as he made the rounds with the dogs. He was a loner guy living in Alaska wilderness on a nearly played-out gold mine. To him it was living the dream. He had a nice cabin, a couple square miles of land to call his own, dogs to keep him company, and a bunch of industrial equipment to play with. Every guy loved playing in the dirt as a kid; Tonka trucks were a standard.

Here he was, living that dream as an adult, digging in the dirt as his own boss. Sure he paid his taxes, everyone did. And he put up with the occasional visit from OSHA or some other meddlesome busybody. But he had it made or so he thought.

Or had thought he frowned thoughtfully. If they were right, he had a month he thought darkly. He still wasn't sure if he'd dreamed the whole encounter up or not.

If they were right, he was about to go on the journey of a lifetime, one to make any Sci-Fi buff green with envy. He was to be transported with one hundred other people of various ages and ethnicities by aliens. “Lucky me,” he muttered and then went back to the chores.

John was six foot nothing in his stocking feet, fair complexion despite being born on the west coast of America. He had sandy hair and wasn't much to look at other than his physique; he still kept in absolute tip-top shape.

He owned just over twelve hundred acres of Alaskan wilderness. His slice of paradise was on a river with a small mining claim and logging. He lived there year-round, unlike most of his neighbors who were snowbirds. He had sled dogs, half wolves with him and a pair of hawks he rescued and nursed back to health. He hunted to supplement the stock of MREs he had on hand.

Eleven months after his warning contact by the floating jellyfish he went into town, the third time that year. Even a self-proscribed hermit needed social contact every once in a while, even if it was just to get the essential foods and fuel.

Everyone used that as an excuse of course. They all complained about the long trek in, how it took precious time from their homes. But humans were social creatures; they needed that time, even if it was momentary. Just hearing your own voice wasn't enough, nor was talking on the phone or Internet. Someone to see, smell feel. He pocketed the gold he'd carefully weighed out, grabbed his jacket, made certain the animals were okay, then was off.

He crunched through the gravel and dirt roads of town. Only Main Street was paved, mainly for the benefit of the tourists. The miners, drill riggers and roughnecks in the area didn't care about pavement, nor did the mountains of snow that would turn the town into a ghost town come winter.

Parking was easy, most of the surrounding natives were on their claims and in the wild. Normally miners didn't come to town during the week unless it was an emergency anyway. He didn't even bother to lock the truck as he climbed out and headed to the assay office.

He turned in his 2.4 ounces of gold, enough to cover his taxes, bills and bar tab with a little bit left over. He deposited the check, then checked his bank account before he headed off to the general store to purchase groceries and stuff he had on his list. He tossed in a couple snacks as a last minute thing, they always tripped him up at the register, then paid and left.

Once he loaded the truck up he went to the local run-down bar. He was a teetotaler; he made a habit of not drinking. One close DUI was enough especially with his record, but just about everyone socialized in Malley's making it the center of town. He ordered a coffee from Shelly the bartender and stirred creamer into it as it steamed. Shelly was good; she liked her coffee thick and strong, just the way he liked it.

He heard locals shoot the shit and joke about various Alaskan shows on TV. He turned and snorted. “Yeah, there at it again,” Shelly said, then went to answer the phone.

Gold Rush
,
Alaska State Troopers
,
Bering Sea Gold
, the crab show,
Ice Road Truckers
, the list went on and on and on. It seemed the lower forty-eight just couldn't get enough of Alaska lately, and camera crews were crawling all over the place all the time. Of course not here, lightning hadn't been so fortunate to strike here they had thought, but from the sound of the local's chatter they were hopeful. After all, the film crews had to eat and spend their money, which meant money going into the local coffers. The current topic was how to entice a crew here in their tiny nowhere town.

John shook his head and tuned most of it out, sipping his coffee. He nursed it, reading the paper someone had left on the bar. Then the news came on and people started talking about squid aliens. That interested John enough to look up in surprise.

He looked over his shoulder, but it was the usual crap, interviews with nut-job people saying they had been abducted. He snorted turning back to take another sip of coffee. But when two people said they were about to be abducted in a month that got his attention again. John turned suddenly intent on listening, staring intently at the screen as a man told the viewers of his visit by squids and a warning. He was cut off though by the news anchor. They just let him do a sound bite, not the whole story, John thought. Figures, he thought darkly.

“We haven't seen you in a bit,” the bartender told him, wiping the bar with a rag. She turned to clean glasses.

John grunted, paying attention to the news. He'd normally be all eyes and ears for Shelly. She was a nice woman, but now...he had to think. If this was true..., he thought furiously. He'd all but screwed himself, he thought. He should have planned, done something, not put it out of his head. The news broke to a commercial. He turned back to her. “Sorry, woolgathering,” he muttered.

She nodded in understanding. “Lot of that going around,” she said in amusement. “Strange things going on in the lower forty-eight and abroad,” she said.

Revival (The Variant Series, Book 1) by Leigh, Jena
Road's End: Apocalypse Riders by Britten Thorne
Monster in My Closet by R.L. Naquin
Apres Ski by Christie Butler
Dirty by Lucia Jordan
The Loneliest Alpha (The MacKellen Alphas) by Grey, T. A.
16 Things I Thought Were True by Janet Gurtler
The Disappearing Dwarf by James P. Blaylock
Little Women (Barnes & Noble Classics Series) by Louisa May Alcott
Queen of Babble in the Big City by Meg Cabot