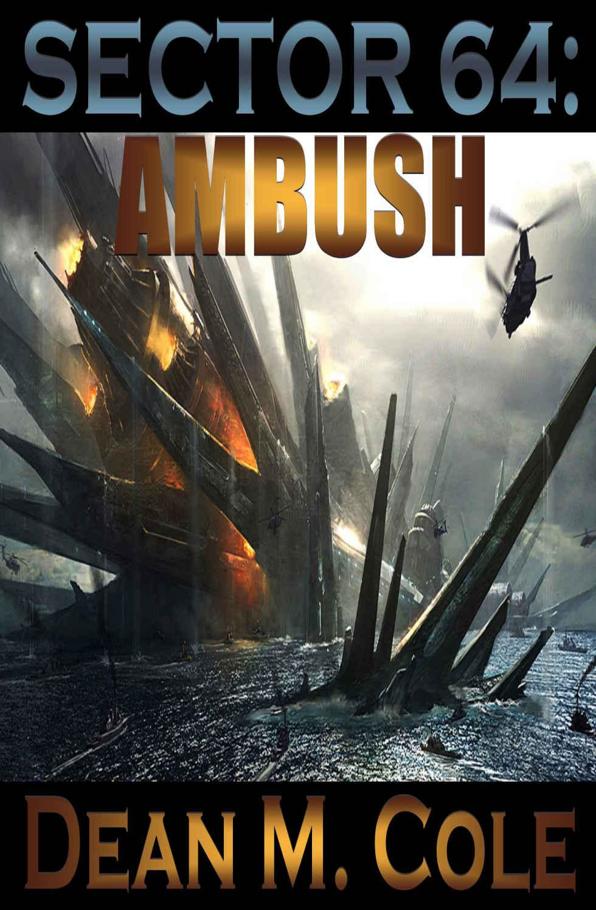 All rights reserved. This book was self-published by the author Dean M. Cole under Candtor Press. No part of this book may be reproduced in any form by any means without the express permission of the author. This includes reprints, excerpts, photocopying, recording, or any future means of reproducing text.

If you would like to do any of the above, please seek permission by contacting the author at

SECTOR 64: Ambush is a work of fiction. Names, characters, places, and incidents are either the products of the author's imagination or are used fictitiously. Any resemblance to actual persons, living or dead, events, or locales is entirely coincidental.

"SECTOR 64: Ambush was a highly imaginative action packed apocalyptic assault on your mind. Take everything that you think you know about the current military, the knowledge that we are alone in the universe, and flip it upside-down. I will continue to listen to this series."

"
SECTOR 64: AMBUSH is an engaging book from the very first page to the final words of the Epilogue.
"

"Cole has a good thing going here ... His descriptions of aerial battle and military procedure are accurately detailed and his knowledge of the aircraft themselves fascinated me ... He created a couple of races of aliens, gave them their own histories and cultures and just made them outright interesting. His characters are realistic and believable as well. Sector 64: Ambush is a great read."

For my daughter, Candace.

You'll always be my princess.

"We stand now at the turning point between two eras. Behind us is a past to which we can never return …"

Two fighter jets sliced through the night air. A crescent moon, thin as an orange peel, cast a dim glow across the Nevada desert five thousand feet below the F-22s. Even under the waning crescent, the bright desert reminded Jake of a Spaghetti Western's night scene. As if filmed during the day with a dark filter to simulate night, the excess visual detail seemed out of temporal place.

"Papa Two-One, this is Lima Two-Four, over."

The radio crackled to life again as his wingman replied. "Roger, Two-One. Come up internal."

Jake nodded and switched his radio selector to the ship-to-ship laser communication terminal. The autonomous system formed a virtual fiber optic link that allowed data to stream between the two fighters. A secure internal communication link piggybacked on the data stream. Unlike a radio signal, the laser beam couldn't be intercepted. So, fighter crews often used it like a cell phone for air to air communication.

"Uh … thanks for doing this. I know you didn't have to take a flight this late."

Jake smiled under his oxygen mask. "It's not like I had anything better to do at three o'clock on a Sunday morning." The truth was, he had plenty he could be doing. However, the junior pilot was having trouble completing his unit indoctrination training. Having already failed one checkride, Victor was struggling with the high workload of the unit's close air support scenarios. Jake had volunteered to take him out for additional iterations. However, in preparation for a combat deployment, the squadron's fighter wings were in high gear, training around the clock. So, Victor's additional period had been relegated to oh-dark-thirty in the middle of the weekend.

"Yeah right," Vic said. "I'm sure you'd rather be on a night training flight than partying a Las Vegas Saturday night away with Sandy."

"Wow, you're right," Jake joked. He broke his fighter into a left bank and rolled away from Vic's jet. "I'm outta here."

Having dropped below Victor's line of sight, Jake rolled his fighter level and passed under his wingman's aircraft. Emerging on Victor's right, Jake pulled alongside. In the moon's soft light, he could see the back of his helmet as Vic searched the sky to his left.

"Over here," Jake said with a chuckle. When the young man's head snapped right, Jake barrel-rolled his fighter over Vic, the maneuver's wide arc carrying him clear of his wingman. It ended with Jake parked off of his wingman's left wing, back where he had started. "This sure as hell beats working for a living. Doesn't it?"

Vic laughed. "When my alarm went off at two AM, it kind of felt like work." Then his tone took on a serious note. "Did you see that report on the news tonight?"

"That report? Can you be a little more specific?"

Frustrated his attempt at levity had failed to distract the young officer from his unending worries, Jake looked across to his wingman and shook his head.
I know where this is headed.

Fresh out of flight training, Lieutenant Victor Croft had never been in combat. Last week, the man's jittery nerves had kicked into hyperdrive when their squadron received orders to deploy to Afghanistan's Bagram Airfield at the end of the month. Renewed Taliban activity, coupled with enhanced weapons supplied by Iran, had NATO forces reeling.

"I'm sure they'll have it worked out by the time we get in-country," Jake said. He felt guilty playing down the threat. In the last year, the Taliban had employed Russian S-300 antiaircraft missiles with devastating results.

"Maybe," Vic said dubiously. "I haven't slept since the meeting."

"Be calm, grasshopper," Jake said. He hoped the poor imitation of a Japanese sensei would allay Vic's continuing apprehension. "You'll be fine, your training will take over once you're in combat, trust me."

"Trust
you
?" Vic asked. The humor in the lieutenant's voice was good.

Victor thickened his soft hillbilly accent in the way that endeared him with comrades—and also won him favor with the Las Vegas ladies frequenting Nellis Air Force Base's officers' club. "Why, because you're from the government, and you're here to help me?"

Exaggerating his own Texan accent, Jake said, "Oh yeah, I forgot, you Appalachians don't cotton to us governmental types."

Victor laughed. "Yep, us hillbillies have a special place in our heart for outsiders. Now, squeal like a pig, boy."

Jake's laughter broke as a tremendous shockwave, coupled with a blinding flash, rocked his fighter. Overtaking them from behind, a bright ring of lights had rocketed between the two aircraft.

"Shit! What the hell was that?" Jake said. Recovering from the shock, he adjusted the controls, reining in his battered fighter.

"I don't know. It must be doing Mach four or better—" Victor faltered as the object broke right. "What the hell?"

Bolting right, it made a ninety-degree turn, changing direction in an instant. One moment it was rocketing away from them, the next it blazed eastward at the same tremendous rate without curving.

"Holy shit, nothing can take those Gs," Vic said, thunderstruck.

"Oh my god," Jake whispered. Blinking, he tried to clear his eyes.
That's not possible.

As if it had no mass or weight, the strange object made several more instantaneous course changes. Varying from slight angles, to complete course reversals, the maneuvers kept it near their two-ship formation.

Its zigzagging path circled the fighters twice. Then it stopped for a few moments. Matching their velocity and vector, it parked a mile off Lieutenant Croft's right wing. A moment later, it snapped to within one hundred meters of Victor's side of the formation, closing the mile-wide gap in less than a second.

"Whoa," Vic said with a shaky voice. His fighter jinked away from the object.

"I've got nothing on radar." Jake paused, taking a deep breath to reel in his emotions. "When it was in front of us, I couldn't see it on infrared either."

Jake narrowed his eyes. "You're right! I see it against the background."

Gliding above the distant horizon, the ring of lights had dark voids protruding above and below. A brief eclipse of the background stars provided the only visual evidence.

"So, it's not some kind of…" Jake paused, searching for words. "Energy source. It must have mass, it's gotta be a ship of some sort." Studying it, he paused, then shook his head. "But I've never seen anything move like that."

"If this is one of ours, it's way beyond anything my physics professor knew about," Victor said.

Looking across his wingman's fighter gave Jake a chance to estimate the ship's size. Judging by the shadow, it was as tall as it was wide. Like a pregnant frisbee, it was broadest across its middle, where the ring of lights still rotated. Horizontally, it was roughly as long as the F-22, making it just over sixty feet wide.

"No idea," Jake said. He couldn't see the skin, but the silhouette's bottom was round, and it looked like the top came to a point. "This is incredible…" As Jake spoke, the ship started closing the gap. "Hey, be careful, it's getting closer!"

Jake's heart raced as he focused on the ship's middle. "Those lights…" He faltered, unable to conjure an adequate description.

"I know," Vic said. He sounded as mystified as Jake felt.

A horizontal, pulsing ring of multicolored light seemed to rotate in the air around the object's midsection. As the ship neared Victor's fighter, Jake got a clearer view of its structure. As if radiating from the ship's center, the glowing rays only extended a foot or two from the ship's skin, but he couldn't see any fixtures generating the energy. "I don't see the source of the lights. They look like … raw energy." Watching the strange ship flying in formation with his wingman was both surreal and somehow familiar.

Sins of the Titanic (A James Acton Thriller, #13) by J. Robert Kennedy
The Mystery of Flight 54 by David A. Adler
Blindsided by Tes Hilaire
We Are Not Ourselves by Matthew Thomas
Where Have All the Boys Gone? by Jenny Colgan
Lords of Finance: 1929, the Great Depression, and the Bankers Who Broke the World by Liaquat Ahamed
Winter Frost by R. D. Wingfield
China Mountain Zhang by Maureen F. McHugh
Operation Malacca by Joe Poyer
Accidentally Wolf by Erin R Flynn