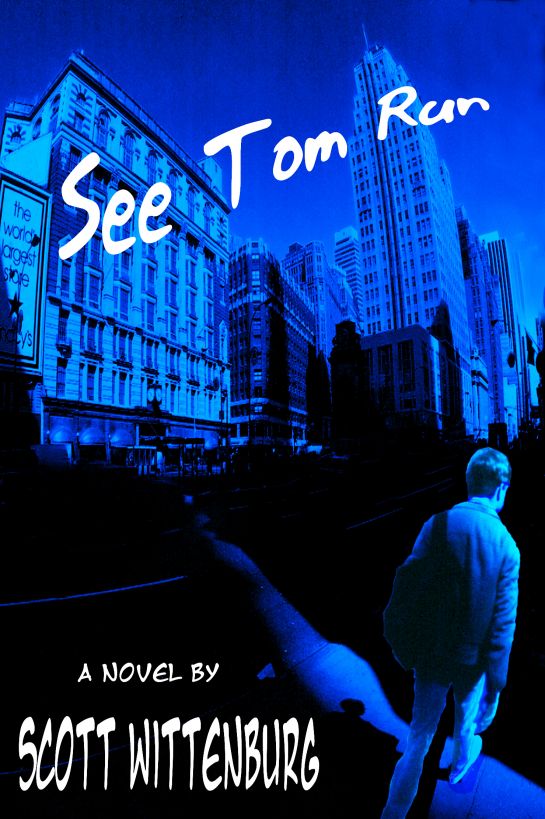 Tom Grayson returns home from a quick errand to discover that his family and guests have all mysteriously disappeared. Prior to this chilling discovery, he has been tormented with guilt by a secret that only he and a former lover share: the two have witnessed a brutal crime that Tom has refused to report. He knows that alerting the authorities would jeopardize all that he holds dear in life: his family and career. In a desperate search to find his missing family, Tom embarks on a journey that can only be described as nightmarish and surreal. When it becomes increasingly clear that Tom may lose something even more precious than his comfortable existence, his priorities in life shift dramatically as he becomes an unwitting detective with a mission. But will it be too late for him to set the record straight?

Discover other titles by Scott
Wittenburg at
www.scottwittenburg.com

This is a work of fiction. The characters and events
of this book are entirely the product of the author’s imagination,
and any resemblance to actual events, or to any persons, living or
dead, is entirely coincidental.

In loving memory of my mother and father.

Tom Grayson felt a numbing chill in the night air as
he and Tracy walked in deliberate silence toward the parking lot.
Fumbling absently through his pockets for the car keys, he was
still reeling from what had transpired only moments ago when he
arrived at her apartment …

“I’m pregnant,” she announced flatly without so much
as a hello.

“I’m pregnant, Tom, and you are the father.”

“Tom, don’t do this to me! Have you forgotten that
night after Spangler’s?”

But surely he couldn’t be that unlucky—

Oh yes he could be, he thought, and that was a
fact.

“Okay, I believe you. So what are you going to do
about it?”

“I’m going to have the child, of course! And I hope
you will be its father.”

“Whoa, wait a minute! I’m a married man, Tracy! Or
have you forgotten? I’m not even supposed to be here!”

His words stung her like a slap in the face, Tom
could tell, and he immediately regretted his brashness.

“I’m sorry Tracy, but you have to know it would be
impossible for me to be any part of this. Surely you can
understand—”

“All I understand is that you are telling me that you
won’t be a father to our child.”

“An abortion? No, Tom, I will not have an abortion.
Besides being Roman Catholic with parents who haven’t missed a
single mass since the day they were married, I don’t believe in
murder—”

Suddenly, the piercing screech of skidding tires in
the adjacent alley shattered Tom’s thoughts. The two turned in
unison to see a car’s passenger side door fly open and a lifeless
body tumble out onto the pavement. A tall, lanky man sprang out
from the driver’s side and ran over to where the body had come to
rest on its side. The man apparently didn’t notice the two of them
standing just yards away as he kicked the body a couple of times
then got back into the car and sped away.

Tom saw the man’s face clearly in the glow of the
streetlight.

He and Tracy scurried over to the where the body was
lying and huddled over it. When he knelt down for a closer look,
Tom saw a young black woman bound with rope, gagged, and
unconscious. He gingerly removed the duct tape from her mouth,
half-expecting the woman to resist or cry out in pain. But except
for a slight flinch, she remained unresponsive.

At that moment, Tom was gripped by a sudden wave of
paranoia. If he were to get any more involved with this, Peg would
almost certainly find out about his affair with Tracy Adams.

And he wasn’t about to risk that happening.

“But shouldn’t we get her out of the alley first and
make sure she’s okay?”

“We shouldn’t move her. She’s alive and seems to be
breathing okay. She needs a paramedic, not us.”

“Wait! If you call from your apartment, they’ll know
you made the call!”

“Tracy, I really don’t want to get involved in any of
this. Nor do I want you to, either.”

Her eyes narrowed. “I get it—you’re afraid that your
wife will know that you were with me and find out about—our child.
I think you’re horrible, Tom!”

“Give me a break! I just found out about all of this
ten minutes ago and it hasn’t sunk in yet! At least give me a
chance to absorb the whole concept before letting the whole city
know! Besides, we can still help out this girl without anyone
knowing it was us.”

“I’ll run to the phone booth around the corner. I’ll
call 911 then meet you back here. Then we’ll book up to your
apartment and make sure that the squad gets here okay. But we need
to hurry before the whole neighborhood comes out to see what’s
happening!”

Tracy thought a moment, and then replied, “All right.
But I don’t like any of this one bit. I think we should stay right
here until the medics arrive.”

He sprinted around the corner and called 911 from the
pay phone. When the dispatcher asked who was calling, he made up a
name, reported the incident and promptly hung up on her.

He rejoined Tracy and hastily led the way back up to
her second floor apartment. Once inside, they peered out anxiously
from the living room window until the squad arrived five minutes
later. Tom waited a moment or so then quietly slipped away before
the cops arrived.

Peg hadn’t suspected a thing when he arrived home. He
called Tracy later that night in a lame attempt to downplay the
whole incident. He insisted that the assaulted girl most likely
knew the man who had dumped her off in the alley so the cops
shouldn’t have any trouble nabbing him.

But that hadn’t quite been the case, as it turned
out.

Not by a long shot.

Tom stared at his hand and debated whether to call
spades trump or pass. He had the right bower, the king and a nine
of spades, plus an ace of diamonds. He was also two-suited. Frank,
to Tom’s left, had dealt and would probably call trump if he
didn’t—and the way his luck had been going in this game, Frank
probably had a loner in hearts or diamonds. The last thing they
needed was to give their opponents a possible four points and lose
the game.

He peered across the table at Peg, who obviously
didn’t have squat. His euchre partner and wife of eight years
always wore her cards on her sleeve. Funny how he was the only one
who ever seemed to notice that.

Frank’s wife, Julie, had hesitated a moment before
passing. Could be a bluff, but Tom doubted it. She could be holding
the left bower for all he knew—or at least a decent stopper hand
along with her husband.

Screw it, he thought. He was not feeling lucky at all
today.

The moment he looked over and saw Frank’s smug grin,
Tom knew they were screwed. He literally wanted to bust him in the
jaw for a split second.

Tom watched in horror and awe as Frank splayed his
cards on the table for all to see: a jack of hearts, a jack of
diamonds, an ace and king of hearts and an ace of clubs.

“I believe we just won the game,” Frank added, not
missing a beat.

Tom groaned, “Screw this! I knew I should have called
spades!”

“Then why didn’t you?” Julie asked.

“Oh well, it’s just a game,” Tom said, with more than
a trace of cynicism.

Just then, Kelli entered the room and tugged at Tom’s
sleeve. “Daddy, can you please tell Tyler to quit pulling my hair.
He’s acting like a little shit again!”

Tom tried his best to keep a straight face as he
reprimanded his five-year-old daughter, but he didn’t have much
luck.

“Now you watch your mouth, young lady. Your little
brother is not a little—what you just said. And if I hear you swear
again like that, I’ll take your toys away from you for a whole
day!”

“Oh, Daddy, you will not! And if you can call him a
little shit, why can’t I? What’s the difference?”

“The difference is,” Peg said, “That your father
needs to watch his mouth around his kids, that’s what. Now don’t
let me hear you swear like that again Kelli or I will take your
toys away for a week! Now go tell Tyler to come in here right this
instant.”

“Okay, Mommy,” her daughter replied with a frown.

“You have got to quit cursing around the children,
Tom! My having to endure that sewer mouth of yours is one thing but
I will not let your affliction be passed on to my children!”

“Sorry, dear,” Tom replied. “I’m working on
it—honest! Kelli must have heard me call Tyler that under my breath
earlier today after I saw what he’d done to my iPod headphones.
Neither of the kids were in the room when I said it—Kelli must have
been eavesdropping.”

Tyler came into the room, his head hung down
forlornly.

“Do not pull your sister’s hair again, Tyler.” Peg
said.

Tyler sauntered out of the room

“Anyone need another drink?” Tom asked.

“I could use a Seven-Seven,” Julie said.

“This will be my last one, Frank. I can’t help but
notice that you’re on your third beer already. So what makes you so
special?”

“I can handle my booze—you can’t.”

Tom got up and headed out of the room. Frank followed
behind and paused for a moment in the living room.

“How’s it going, pumpkin?” Frank asked his
four-year-old daughter, Brittany. “Are you and Kelli having a good
time?”

“Yes, Daddy. Guess what! We just
decided that we’re going to be
fashion
models
when we grow up!” she gushed. The
two girls then commenced to sashay around the room as if they were
doing a runway show.

“Perish the thought,” Frank sighed as he followed Tom
into the kitchen. “I don’t think I’ll ever be ready for the teen
years, Tom. I’ve been dreading that the very moment I found out we
were having a girl.”

“I know just what you mean,” Tom replied. He opened
the fridge and saw that the Seven Up bottle was nearly empty.

“Looks like we’re out of pop. I’ll go to the store
and get some more.”

“Want me to join you?” Frank offered.

They returned to the family room and Tom gave Peg a
peck on the cheek.

“I’m going to run to get more Seven Up—we’re fresh
out. Anything else anyone needs?”

“Can you get me some cigarettes?” Julie asked.

“Forget about it, Julie. As much as I don’t want to
be a party to your suicide, I will spring for the little killers
for you.”

“Be careful, Tom. The roads have surely gotten slick
by now,” Peg cautioned.

A Woman's Worth by Jahquel J
Dirty Money (Bad Money #2) by Ali Parker
Murder in the City: Blue Lights by Tatum, Clare
Yours to Savor by Edwards, Scarlett
A Is for Abstinence by Kelly Oram
Age of Iron by Angus Watson
Gasoline by Quim Monzó
Sweet Temptation by Greenwood, Leigh
Jayson: A New Adult / Coming of Age Romance by Hughes, Nicole
Yours for Eternity: A Love Story on Death Row by Damien Echols, Lorri Davis