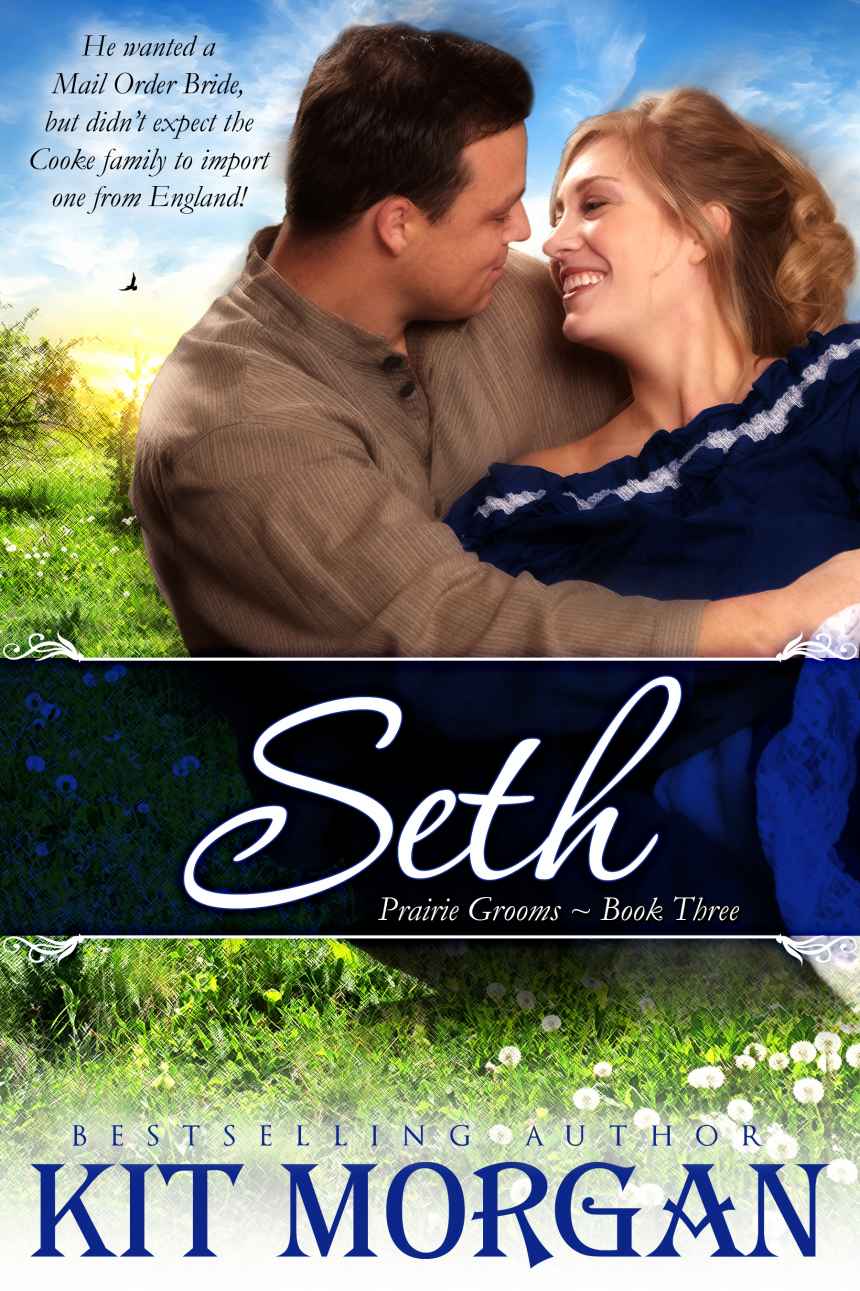 Find other titles by Kit Morgan Including:

All rights reserved. No part of this book may be reproduced in any form, except for brief quotations in printed reviews, without permission in writing from the publisher.

All characters are fictional. Any resemblances to actual people are purely coincidental.

For all those who have
been misjudged, and lost a love because of it …

In case you haven’t figured it out, all my books are interconnected. Characters from the Prairie Bride series show up in The Holiday Mail Order Brides Series, and characters from both series are now showing up in Prairie Grooms. There is an even bigger picture that binds them all together, and along the way you may find yourself asking; now why did Kit put that in there, and not go back to it? Hmmm … or, what’s going to happen to Thaddeus Slade? Why bring him up at all? Well, now, keep reading and find out! And keep track if you can … these stories are loaded with clues! All leading to that bigger picture …

Eventually I’ll give a list that tells
in what order to read the books to get that bigger picture, and then one can look at these fun little western stories, and see something entirely new. Or, you can simply read and enjoy them as the sweet, western romances they are. The choice will be yours.

Now, let’s move on to our story. Tom Turner, still at the Weaver farm, doesn’t even take a break! He moves from Ryder’s story and goes right into Seth’s …

“That’s it?” cried Calvin. “You’re just gonna up and leave us hangin’?”

Tom smiled. Yep, he’d left them
hangin’ all right, on-the-edge-of-their-seat kind of hangin’. To do so made for a better story, in his book.

Tom sat back. “I’m plumb tuckered out. Maybe we outta wait until mornin’ for me to finish.”

“NO!” Calvin and Benjamin cried at o
nce. Even though in their early twenties, they still hadn’t learned the value of patience.

Tom chuckled in response. “What about you
, Arlan?” he asked their older brother. “You up for one more?”

“Sure, why not. So long as we find out what happened to Ryder’s friend
, Cutty.”

“I like to think of him as Cutty,” Arlan told her. “I’d also like to see him brought to justice.”

“I’d like to s
ee him redeemed,” said Samijo.

“Does he?” asked Arlan. “Does the dirty varmint get what’s coming to him?”

Tom shook his head. “For such nice folks, you sure are a bloodthirsty lot.”

Calvin and Benjamin laughed. “Out here, ya sometimes have to be,” said Calvin.

Tom sat up in his chair. “Well, I’ll tell ya, justice doesn’t always come the way we think it oughta. Okay, one more, then we call it a night. Now listen up …”

“Seth!” Wilfred Dunnigan cried as he rushed into the hotel. “Come quick! It’s your brother! He’s in a bad way!”

Seth Jones looked up from
behind the hotel’s front counter. A chill went up his spine and settled in his stomach, a cold lump that sent his mind spinning out of control. Shot? Stabbed? Speared? “In a bad way” at least meant he was still alive. Seth jumped up from his chair and, not bothering to go around the counter, leapt over it instead. Wilfred’s eyes widened at the physical feat, but he said nothing, and followed Seth out the hotel’s double doors.

“Where is he?” Seth asked as he hurried down the street.

“At Doc Waller’s house. His wife brought him into town.”

“When did they get here?”

“Almost two hours ago! I’ve been looking for ya ever since. Where ya been?”

“I went for a walk
; I’ve got a lot to think about now that I’m getting married!” he said as he picked up the pace. “What happened?”

Wilfred struggled
to keep up. “Rattler,” he huffed, almost out of breath.

Seth broke into a run, and left Wilfred to
follow along as best he could. He ran straight for the house at the end of the street, and was about to run inside, when Doc Drake stopped him. “Whoa there! Slow down before you run somebody over. He’s fine.”

“What?” Seth asked as he caught his breath.
He hadn’t even seen him standing on the porch. “What do you mean, ‘fine’? Did the snake bite him when they on their way to town?”

Doc Drake shook his head. “No, he got bit out at his place. But he’s going to be fine. He’s in there speaking with his wife. Let them have a moment before you see him, okay?”

Seth slumped against the porch rail. “Thank the Lord!”

Wilfred caught up and joined them, huffing and puffing. “Land sakes, boy! But you’re a fast one!”

Seth looked at him, gave him a smile, and took a few deep breaths of air. “What happened?”

Doc Drake gave him a grave look. “Seems your brother had some unwanted visitors out at his place. I’ll let him explain, bu
t he thinks they’re the same cattle rustlers that have been giving the Cookes trouble.”

“How’d he get bit by a rattler?” Seth asked. “Ryder’s not that careless.”

Seth nodded as his mind raced. Ryder would never let himself be caught unaware out on the prairie. He was too good a hunter, and, like himself, slept with one eye open most of the time. It became habit when one lived out in the wild, not to mention with the Indians. “What about Constance? Is she all right?”

“She’s the one done brought Ryder into town,” said Wilfred.

Seth smiled. “Well what do ya know? He really is turning her into a match for him. He said he would.”

“She’s got grit, that one,” added Wilfred.

The front door opened, and Eloise stepped out. “Oh!” she said with a start when she saw the men. Her eyes gravitated to Seth. “He’s in with my sister.”

Seth smiled. “I know. Would you care to wait with me, or is it time for you to be getting on home?”

“Colin hasn’t come for
me yet. I was supposed to be at the Dunnigans’, working on my wedding dress.”

Seth nodded, suddenly tongue-tied, and stepped to her. They stared at
each other until Wilfred cleared his throat. “Best come with me, Miss Sayer. I’ll have Seth send your sister over when he goes in to see Ryder. Give the two of you a chance to visit.”

“She might want to go straight to the hotel. She’s very tired, and …” she grimaced. “…
dirty.”

Seth took in her expression and quickly put everything together. “She brought him to town injured. She must be wearing Ryder’s buckskins. I can’t imagine her hauling a wounded man all this way in a dress, trying to ride side-saddle.”

“Y
ou’re quite right,” Eloise confirmed. “She’s covered with dirt and smells like leather and horse.”

Se
th glanced at Doc Drake. “Miss Sayer can take her sister to the hotel, get her settled, then go home. Did Constance need tending?”

Doc Drake shook his head. “No, she was fine. Just shook up.” He turned to Wilfred. “He’s got the right idea. Mrs. Jones should rest and have something to eat.”

Wilfred nodded. “Okay, me and the little missy here will take her down to the hotel and have Mrs. Upton fix her some supper. Colin oughta be along any time now.Tell him where we are, will ya?”

Seth gave him a curt nod, and went back to leaning against the porch rail. Eloise watched him, took a deep
breath, and let her gaze wander across the street. “I shan’t ever get used to this.”

“Used to what?” he asked, his voice low.

She looked at him. “All this …” she closed her eyes, and he knew she was searching for the right words,“… upheaval.”

“Life can be hard out here
; I’m sorry if you don’t find it to your liking.”

She looked at him, as her eyes
glistened. Was she about to cry? His gut tightened with the thought. “It just that, ever since we arrived in your country, I’ve seen things a lady should never have to see.”

Seth came away from the rail. She was right.
If she’d stayed in England and continued her life there, she wouldn’t come close to seeing the things she had during her short time in America. She and her sisters suffered enough on the journey here, let alone any of this.

He stepped to her, and took her hands in his. “You’ll survive; we both will. Besides, we’ll be living here in Clear Creek, in the nicest place in town. What can happen?”

Her eyes widened. “I should think any number of
things, but … right now I dare not think of them.”

She gazed up at him, and he felt something, something he’d not felt before. What was it? Warmth spread through him, but it wasn’t something primal that told him to take her, that soon she would be his. No, thi
s was something else. Something that went much deeper.

Doc Drake came back, and pulled
him from his thoughts. “Okay, Seth, you can go in now.” He moved out of the way. Constance stood behind him, looking like death. She was indeed dirty, and smelled of leather and horse. Mostly horse.