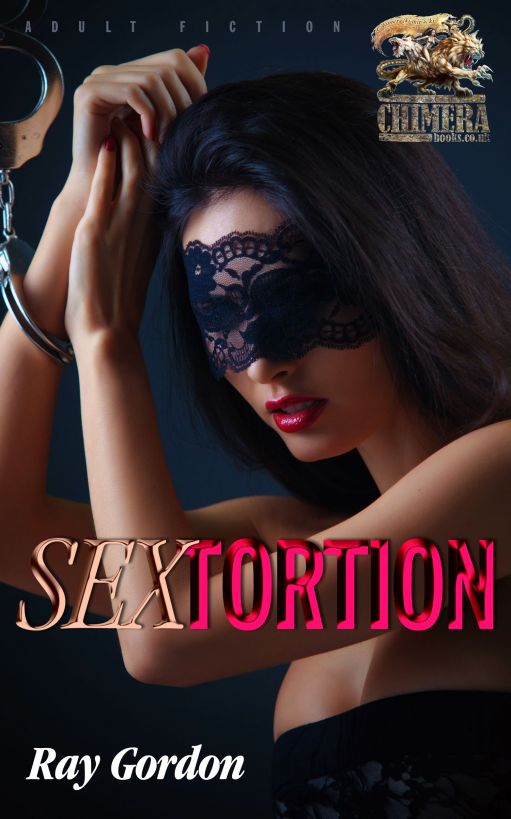 Sextortion
first published in 1999 by Hodder & Stoughton. Published as an
eBook in 2012 by Chimera eBooks.

Chimera (
ki-mir'a,
ki-
) a creation of the imagination, a wild
fantasy.

New authors
are always
welcome, or if you’re already a published author and have existing
work, the eBook rights of which remain with or have reverted to
you, we would love to
hear from you
.

This work is
sold subject to the condition that it shall not, by way of trade or
otherwise, be lent, resold, hired out or otherwise circulated
without the publisher's prior written consent in any form of
binding or cover other than that in which it is published, and
without a similar condition being imposed on the subsequent
purchaser. The author asserts that all characters depicted in this
work of fiction are eighteen years of age or older, and that all
characters and situations are entirely imaginary and bear no
relation to any real person or actual happening.

Copyright Ray
Gordon. The right of Ray Gordon to be identified as author of this
book has been asserted in accordance with section 77 and 78 of the
Copyrights Designs and Patents Act 1988.

This novel is
fiction - in real life practice safe sex.

There are two
sides to every coin. Good and bad, love and hate - sex with love,
sex with lust. Money can incite generosity or greed; success,
praise or jealousy. It was only when I'd found success that I
discovered the world to be full of greed and jealousy. I'd set my
sights on my goal and worked hard to achieve it. But the
covetousness of others loomed in the sky like a dark cloud rolling
in over the sea, ultimately and inevitably engulfing me.

Looking back
over the few short weeks of my nemesis, I see myself. My naked body
sprawled over the dining room table, my hands and wrists tied with
rope, my thighs spread to the extreme, my sexual centre is
obscenely bared. As burning sensations permeate my buttocks from
the merciless thrashing wreaked upon me, I feel the wet female
tongue exploring between my sex lips, snaking around the silken
entrance to my sacrosanct vagina, teasing my clitoris.

Steel rings
are clamped tightly around my ballooning breasts, studded leather
straps biting into my thighs. I wince as my abuser plunders her
potent fingers into my sperm-drenched, fleshy cavern, stretching
the satiny walls of my sex canal, massaging deep inside my vagina
before sucking my clitoris into her hot mouth.

Humiliation
and degradation besiege me as my naked audience look eagerly on. I
am, therefore I think. What further acts will I be forced to endure
before the night of debasement is out? Whatever follows, I can sink
no deeper into the viscous pool of depravity! Dragged across the
perilous threshold of debauched sex, there is no longer a woman in
me. My femininity has been pillaged, robbed, as my naked body has
been used to satisfy the shameful cravings of my mistress.

An ardent
finger searches the valley between my tensed buttocks, seeking
entrance to my private duct. As I whimper and beg for my freedom, I
try to block out the repugnant reality by squeezing my eyes shut.
But the poacher finds my secret rosebud, penetrates me, delves deep
into my private hole as I am forced to suck on an erect penis.

Gushing sperm
fills my cheeks. How much more can I endure - the ruthless
whippings, the crude sex? But I know there is no escape, that I'll
be forced into obscene sexual acts again and again. My body, my
temple, is nothing other than an object to gratify the carnal
desires of my abusers. I am their slave, I belong to them, I am
theirs to do with as they wish, when they wish.

I wonder now
whether I could have avoided the horrors, the degrading sexual
abuse. I wonder now if I would have chosen to avoid them. For
hasn't the coin always two sides? Love and hate, good and bad,
repugnance... and desire! If I'd known then what I know now... But
I was naive, trusting, innocent, oblivious to the wicked plans that
had been drawn against me. I'd been led unsuspectingly down a blind
alley to a world of debasement, a domain where evil reigned -
beckoned.

My journey
down the road to defilement had begun after enjoying lunch with my
editor. Discussing the huge success of my first novel, I felt
elated, heady more with excitement than the flow of sparkling wine.
With a second blockbuster in the offing, my future looked brighter
than ever. It seemed that I couldn't put a foot wrong.

I drifted home
from the metropolis on my euphoria, desperately excited to tell my
husband the wonderful news. Bursting through the front door, I
found he had some news for me. Locked to his pallid countenance, I
couldn't believe that my world had been turned upside down and
inside out. His lips were moving, his dark eyes transfixed on mine,
but the sinister words barely registered in my swirling mind. I
felt dizzy, confused, as if caught in the ethereal web of a
dream.

"Ridiculous or
not, it's true," he sighed, his expression tormented.

Wringing my
hands as I waited in anticipation for him to laugh and tell me that
he was having me on, I watched him mooch across the lounge and gaze
out of the window. His expression pained, his forehead lined, he
looked tired and drawn, mentally anguished.

My mind was a
whirlpool of devastation as I recalled leaving for London that
morning. Bubbling with excitement and enthusiasm, Danny had told me
how proud he was of me. But now? A million thoughts raced through
my head, hurting me. I couldn't think straight, my mind blurring as
he finally turned to face me.

"Selina, I'd
hardly joke about a thing like this," he scolded me with a severity
I'd not known before.

"A girl turned
up on the doorstep and demanded money for keeping quiet?" I asked
incredulously, shaking my head.

"Keeping quiet
about what?"

"She knows
about the insurance fiddle."

I stared at
him, wondering what on earth he was talking about. Insurance
fiddle? Blackmail? He was more than partial to a few glasses of
scotch and, for a moment, I thought he'd been drinking. But no, he
hadn't been on the alcohol. His expression couldn't have been more
sober!

"What
insurance fiddle?" I asked pathetically.

"The
kitchen... That was years ago, Danny! Besides, it was only a few
hundred pounds."

"It was almost
a grand."

"Whatever it
was... How does this girl know about it?"

"It doesn't
matter how, the point is, she knows."

Now he came to
mention it, I remembered the scam only too well. Desperate for
pennies at the time, inventing an insurance claim had helped us
through our impoverishment. Danny had been a struggling writer, a
failed writer, while I worked part-time at the library for a meagre
wage. Only too well aware that it was wrong, illegal, I'd filled in
and despatched the claim form. Although perfectly feasible that a
burst pipe in the bathroom could have flooded the kitchen ceiling,
I'd been riddled with guilt, my heart missing a beat every time the
front doorbell rang. Thankfully, the man from the Pru hadn't
appeared and a cheque for nine-hundred odd pounds had duly arrived,
saving us from financial disaster. We'd thought that was that.

"There's no
way she could know about it," I reasoned, trying to understand what
was happening. "Unless she works for the insurance company
and..."

"I'm sure she
doesn't work for them," he murmured.

"You should
have told her where to go, Danny! Anyway, making a false insurance
claim is hardly blackmail material! Had you told her in no
uncertain terms..."

"Initially, I
did tell her where to go. But then she..." He winced and bit his
lip. "Selina, there's more."

"She also
knows about the affair you had with Barry."

My thoughts
drifting back eight years, surfacing from the recesses of my racked
mind, I wondered how Barry could have led me down the garden path
as he had. He'd stolen my love and my virginity, promised me the
stars... before I'd discovered he was married with three children.
I'd been rocked by devastation, shaken to the very core by his
fantastic web of lies. But what had Barry got to do with this
strange girl?

"Danny, that
was before I met you!" I exclaimed, confusion spreading through my
mind like spores.

"Selina, you
were screwing a man who was married with three kids! You're a
celebrity now, in the public eye. If the tabloids get hold of this,
what the hell's going to happen to your squeaky-clean image?"

"I didn't know
he was married!" I countered. "The minute I found out, I ditched
him."

"It's a
nightmare, Selina."

It was a
nightmare, and I longed to wake up and find myself in bed with the
morning sun streaming through the window, its warmth bathing my
body. But only cold darkness engulfed me. Blackmail? Who was the
girl? How did she know so much about me? My mind was a lake with a
thousand questions riding on ripples of confusion.

"How much
money?" I asked resignedly.

"Selina, we
have no choice. You've been portrayed as Miss Perfect, happily
married, squeaky-clean... Can you imagine the headlines? Miss
Goody-two-shoes screws insurance company."

"No one's
going to bother about that!" I returned angrily. "It's hardly a
juicy story! Good God, thousands of people must have fiddled
their..."

I knew he was
right. Once the tabloids had got their sharpened teeth into me,
they wouldn't let go. They'd find Barry, talk to his wife, his
children would discover their father's dark secret and...
Squeaky-clean image? That's how the media had portrayed me.
Brilloed part-time librarian and housewife shoots to overnight
stardom. TV chat shows had embraced me, expounding on my first
novel, my love of cooking, gardening, homemaking... Lovemaking with
married men wouldn't exactly tie in!

Trying to
compose myself, I walked to the kitchen and filled the kettle. I
didn't want tea or coffee but I had to do something, occupy myself,
hold my head above the turbulent waters threatening to suck me
under. Danny followed me and leaned against the worktop, torment
mirrored in his deep-set eyes. This was what success had brought
me. Fame, fortune - and blackmail!

"Where are we
supposed to leave the money?" I asked nonchalantly, as if suddenly
resigned to the fact that I had to pay up.

"Then, let's
call the police."

"Selina, we
can't involve the law."

"Why not? Good
God, there's a girl coming here, blackmailing me, demanding money
and..."

"If we call
the police, she'll be arrested."

"And she'll
sell her story."

Nonchalance
succumbing to fear, I couldn't believe that someone could glibly
come to my house and demand thousands of pounds - and there was
nothing at all I could do about it. It was like having a thief
enter my home and steal my treasured belongings from under my nose.
The situation was incredible, like something out of a horror movie.
I couldn't just hand over five thousand pounds to a stranger!
Besides, she'd be back for more and...

"Follow her
and find out where she lives," I proffered, pouring two cups of
coffee.

"D'you think I
hadn't thought of that?" Danny snapped. "While I was waiting for
you to come home I did nothing other than think of all the bloody
possibilities! There's no way out of it, we have to pay her."

"What time is
she coming?"