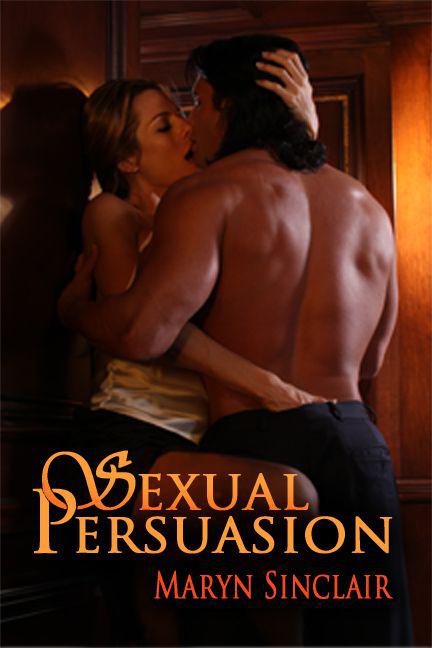 This book was originally published by Loose Id in 2011. It has been changed only slightly from the original. This e-book is a work of fiction. While reference might be made to existing locations, the names, characters, places, and incidents are either the product of the author’s imagination or are used fictitiously. Any resemblance to actual persons, living or dead, business establishments, events, or locales is entirely coincidental.

This e-book contains sexually explicit scenes and adult language and may be considered offensive to some readers. This e-book is for sale to adults ONLY, as defined by the laws of the country in which you made your purchase. Please store your files wisely, where they cannot be accessed by under-aged readers.

The Good, Bad, and Ugly Evening

And the Walls Begin to Tumble

One Baby Step at a Time

The First Step, then Another

A Bigger Can of Worms

Trust Is More than a Word

An Appetizer to Dinner

Icing on the Cake

The Gamble Pays Off

The Good, Bad, and Ugly Evening

The flurry of tuxedos hustling up the museum walkway for the fund-raising auction resembled a scene from
March of the Penguins
. Alongside, well-coiffed women in designer gowns and glittering diamonds hurried to keep pace. When the taxi pulled into the circular drive, Charlotte paid the cabbie, then she and Darcy joined the throng.

“I’m glad we didn’t drive,” Darcy said. “God knows how far we’d have to walk from the parking lot, and me in four-inch heels.”

Charlotte nodded to a few customers she knew from her home furnishings store, decked out in their evening finest. Entering through the massive double doors, she noticed a tall, olive-skinned man staring at her with an intensity that caused her skin to tingle. His date hung on to him as if Velcroed to his arm, doing her best to capture his attention. But his focus remained on Charlotte’s face and not on every man’s usual target: her voluptuous chest.
A point in his favor.

Wearing a tux that looked as if it was custom-made to highlight his trim build, he was as handsome a man as she’d ever seen. And Charlotte Stone was a sucker for a handsome man. He reminded her of a panther―sleek and dark and dangerous, with hair almost too long, but he got away with it. If Charlotte’s blush didn’t call attention to every inner thought, her nipples were a dead giveaway, puckering and tightening under the soft fabric of her dress. She wrapped her beaded shawl around her hoping he
hadn’t seen. She turned away but felt drawn back by the stranger’s overpowering electricity.

“Do you know who that is?” Charlotte whispered to Darcy, nodding in mystery man’s direction. “He’s staring at me as if I were naked.”

Darcy checked and scoffed. “Forget him. He’s an attorney.”

“Darcy, you’re an attorney, and you’ve always said you can’t meet anyone because all the attorneys were boring and looked like they’ve died in a law book. That guy’s gorgeous.”

“Let me clarify. His name is Alex Andros, and he’s the attorney for Max Carpathian. If you’ve never heard of him, Max is rumored to control all the rackets in town. In other words, Max is a crook, who also happens to be a switch-hitter. Every beautiful socialite in town has batted on one side of Max’s home plate, and Mr. Gorgeous, who’s undressing you with his eyes, bats cleanup on the other.”

“Are you saying that hunk is gay?
Impossible, Darce. He’s oozing sexuality.”

“Honey, I’m only saying what I’ve heard. At best, he’s bisexual. He and Max have been together for years, and Max is Andros’s only client. There has to be something to the rumors. Andros keeps a low profile, but he’s very smart and clever, and when he goes into court on Max’s behalf, he always wins. The man is poison to the DA’s office.”

Charlotte darted a peek over her shoulder, noting Andros’s nod of amusement when he caught her checking him out. No gay man could look at a woman like that masculine, sexy man looked at her. Even if he was bi, he was still a crooked lawyer. “Well, I’ll be. Goes to prove you can’t be sure of anything these days.”

“Come on. Let’s find our table.” Darcy pulled out a ticket from her purse and waved it. “Lucky number seven.”

Charlotte forced herself to ignore her admirer, but the heat of his stare still burned on her back. “Darn, I wish I had more time to look at the art up for auction. That’s what I get for being late.” Charlotte undraped her shawl and noticed a few ardent enthusiasts ogling her. Darcy, tall and angular with small breasts, always said if she had Charlotte’s endowments, she’d flaunt them. Though Charlotte never wore sexy clothes during business hours, she wore a low-cut dress tonight that displayed her assets in obvious fashion, and she didn’t mind the appreciative stares she was receiving. It had taken a few months to get over Jack, and now, for the first time in thirty-four years, she didn’t give a damn what anyone thought. She was a new woman.

“Find the table, Darce. I’m going to dash around the exhibit to see if there’s anything I must have.”

Charlotte plowed through the crowd, some already heading to their tables, while she toured the display. Paintings, signed and numbered prints, and one-of-a-kind pottery and glass art donated by artists from all over the country sat on tables and easels. She recognized some of the names and jotted down a few numbers with certain clients in mind, then turned back to the dining area to find Darcy’s hand waving in the air, beckoning her.

“See anything you liked?” Darcy asked.

“Quite a few pieces.
I’ll have to see how high they go before making a bid.”

The tickets for the evening cost a fortune, but the fundraiser included a gourmet dinner prepared by Mr. Louis, one of Boston’s finest chefs. A few people had already taken seats at their table. Charlotte didn’t recognize any of them but nodded anyway.

The gentleman next to her held out his hand. “Michael Branigan, and this is my fiancée, Emily Fallon.” Charlotte took his proffered hand, noticing the old goat’s gaze settled on her cleavage. He had to be in his late sixties. She smiled at his date. Ms. Emily looked to be in her midtwenties, with siliconed breasts and a rock on her finger the size of Rhode Island. Branigan was definitely a boob man.

Emily leaned forward to talk to Charlotte. “Don’t you work at that wonderful home furnishings store on Newbury Street with all the trendy furniture and accessories? I’m sure I’ve seen you in there.”