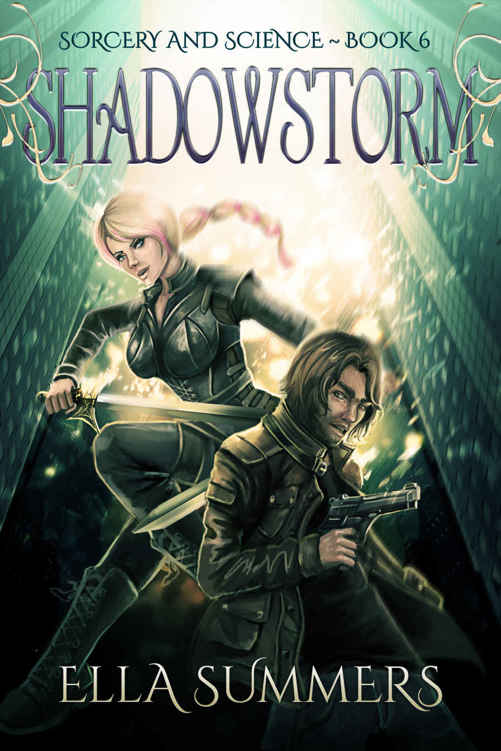 Half a year after the destruction of his home city, mercenary Everett Black is still adjusting to life in the magically-concealed town of Eclipse. His adventures with sorcerers and assassins are interrupted, however, when someone from his past returns with a chance at revenge against the empire that ordered the attack on his people.

But the box of clues doesn’t add up, and the more Everett digs into the past, the more everything points to a dark and dangerous enemy lurking in the shadows. It will take all his skills—and a lot of help from his new allies—to survive the encounter.

Shadowstorm
is Book 6 in the
Sorcery and Science
fantasy adventure series.

The Island of No Return

Love is in the Air

Eye of the Storm

WINTER HAD BEEN slow in coming to Marina Bay. Overhead, a downy sky foretold the coming of the seasonal rains; below, a crusty breeze tossed around a scattering of fallen leaves, blowing away the lingering remains of an erratic autumn.

Snow rarely fell there, in the temperate climate of the Learan Peninsula, but morning frost was a regular wintertime visitor. It just didn’t stay long. As Emperor Aaron Selpe trod down the long, sandy-colored planks of Marina Bay’s dock, the frosty crust cracked and dissolved under his boots. The chilled air nipping at his cheeks, he turned to watch the sun rise. A splotch of pink light smeared the horizon, fading quickly with every passing second.

That pale but vibrant pink—it reminded Aaron of Terra. His mind conjured up an image of his Elition wife, just as she’d looked on their wedding day. Her bright eyes, like sparkling sapphires, wide and nervous. Her long hair, naturally pink-blonde, swept across her forehead and tightly braided into coils, complemented nicely by the pink diamonds in her drop necklace. Her ice-white dress, long and elegant on the bottom, criss-crossed with ribbons in the back.

Aaron dropped his eyelids for a second and sighed. She was magnificent.

And he hadn’t seen her in nearly a month. She’d returned from Cape Midnight broken, blood dripping from her hands. Veronica’s blood. She’d killed Veronica, and her mind had paid the price. She hadn’t been the same after that. She had always been capable, always strong—but she had also been innocent. She’d managed to live nearly eighteen years in their cold world without committing any of the many atrocities of which he himself, for one, was undeniably guilty. He could see it in her eyes, the tormented guilt over what she’d done, her first and only kill.

Aaron knew her anguish was made doubly worse by her condition. Rarest of the Elition gifts, Terra was a Prophet. When she closed her eyes to sleep, she saw foresights of what was to come—or, in Veronica’s case, the murdered potential of her life, all that would never be. And from the way she’d screamed out in terror in the middle of the night, her tortured wail echoing off the walls, Aaron could hardly entertain the idea that this was a pleasant experience for her.

He regretted sending her to Veronica, not just because of her resulting pain, but because that pain had caused her to flee from him. He should never have listened to Lord Adrian, Aaron decided as he looked at the robust man walking on his left side. The veteran member of the Selpe Advisory Council—which included the Empire’s most prestigious rulers—Lord Adrian had settled himself deeper than most inside the emperor’s inner circle.

He was almost as tall as Aaron and considerably less fit, though the past year had seen a significant trimming of the once paunchy nobleman. This new figure—combined with his stately silver-grey hair and his smart jet-black suit—made him a force to be reckoned with. Nora, Aaron’s travel organizer, flirted with him shamelessly, even though she couldn’t be a day over twenty-five, and Lord Adrian was… Aaron laughed to himself. Fifty? Sixty? He’d never gotten around to asking him.

Aaron shook his head. This was no time for fun.

“Sarah Avan has brought Nemesis along,” Lord Adrian said, staring at him with narrowed eyes.

They’d just reached the end of the dock runway. Surrounded by a thin perimeter of grass, a dome-topped aquamarine building stood before them, the front doors swung wide open in mock friendliness. A lone figure stood silhouetted in front of the wall, her spiked, fiery orange-red hair contrasting violently with the blue-painted background. Nemesis. Her eyes, brilliant turquoise—though Aaron had witnessed firsthand that they sometimes shone blood-red—studied their progress, but she was posed in perfect statuesque stillness. Like a tiger lying in wait for its prey.

As they moved in closer, Aaron noticed that Nemesis’s eyelids were crested with orange-red eyeshadow—the shade a perfect match to her hair—and a mixture of colorless and red sparkling gems darted across the skin from the corners of her eyes to her ears. Her bare arms, shimmery pale like the rest of her skin, were planted rigidly on her hips. She didn’t appear cold in her spaghetti-strapped, short-skirted, red leather leotard dress, but just looking at her made Aaron shiver. The metal studs that decorated Nemesis’s dress, and formed a line up her knee-high matching leather boots, gave her a hard edge, like she was ready for battle. The belligerent sneer upon her lips only seemed to confirm this.

“Ah, the Selpe Empire’s baby-faced new emperor has arrived at last. You’re looking rather pale.” Her sneer twisted into a venomous smile as she led them inside. “Have you, as you humans are so fond of saying, bitten off more than you can chew?”

Aaron forced a smile onto his lips. “Nemesis.”

“Not much on words, I see. I suppose you were chosen for your pretty face rather than…” Her red lips twisted into a haughty smirk. “Well, I’m sure you have talents in your own way,” she said in mock indulgence. “Though, personally, I much prefer your delectable Elition wife. How is dear Terra Cross?” She turned to flash a demented smile at Aaron. Her tongue licked across her fiery lips. “Incredible to think that all those years everyone was looking for her in dusty old temples, and she turned out to be right there all along, before our very eyes.”

From Nemesis’s sour expression, it was clear that she didn’t find this the least bit ‘incredible’. More like aggravating. Like the Selpes, the Avans had searched tirelessly for Terra, renown for her power of Prophecy, for over a decade with no success. All the while, she’d been right in front of their faces, masked in the identity of the Elition orphan Isis.

Aaron had been beyond shocked to learn that the woman he loved was Elitia’s lost princess. And he wasn’t the only one. He wondered who had told the Avans. He sure as hell hadn’t.

They took a staircase up onto the center of the lit stage in a large, theatre-like room with high ceilings and upward-sloping floors. The room was a perfect circle with orbiting rows of seats positioned in rings around the stage. Blue-white spotlights shone down on Aaron and his party as they made their way across the creaking wooden stage to Sarah Avan.

The Avan empress was as tall as Aaron and very slender, to the point of willowy—yet she had an aura of strength around her. She wore a long, tight-sleeved, orange-and-gold gown. Over the dress she’d draped a white fur shrug that really stood out beside her rich mocha skin. Aaron noticed that she was still wearing her gloves, long and woven of fine white cashmere. She didn’t like the cold. Most of the Avan lands were warm, if not tropical. Her crown, gold set with rubies, was perched atop her dark brown hair, which had been pulled up into an overflowing elegant twist of gently wavy locks.

Nemesis was already at Sarah Avan’s side. “My Empress,” she chimed, looking at her with sick devotion. Nemesis’s eyes turned and leered at Aaron. “Emperor Selpe and I were just discussing Terra Cross.”

When the Avan empress spoke, her voice was both soft and harsh, like glass cutting through rose petals. “And how is your most unwilling bride, Selpe? Misplaced still?”

From her tone, she might as well have been asking about a lost sock, though Aaron knew she desired Terra more than any clothing garment. A fervent believer of Elition lore, Sarah Avan had wanted to capture Terra for as long as she’d been empress—ever since she’d taken the throne in the wake of her father’s assassination twelve years ago.

They know.
Aaron held Empress Avan’s stare.
Not only do they know who Terra is, they know that she wasn’t an entirely willing participant in our marriage.

She’s attracted to you,
he told himself.

That’s not the same as love.

She would have grown to love you.

Maybe. If she hadn’t run off. Cornering her into killing Veronica was a mistake.

Come to think of it, how exactly did the Avans know she was gone? Did they have a spy high up in the Selpe ranks? Yet another traitor. This was getting old.

“You wouldn’t know anything about Empress Selpe’s disappearance, now would you?” Lord Adrian asked, and Aaron was thankful for his deflection.

Sarah Avan’s dark eyes lit up in surprise, and in longing, for a moment—before she collected herself and put on a coy smile. She wished she’d taken Terra. Aaron didn’t need any Elition magic to see that.

“Tell me, Lord Adrian, how is it you had this exceptional Prophet right before your eyes for so long, and yet never connected the dots?” Sarah Avan inquired, her voice falsely sweet. She was calling him an idiot.

Lord Adrian glared at her, his grey eyes cold and calculating. The smile was still stuck on Sarah Avan’s painted lips, and Nemesis looked upon the Selpe party with eager belligerence.

It was then that Aaron realized there was another member of the Avan party present. A tall man with broad shoulders hovered behind Sarah Avan, his hood masking his face in total shadow. Aaron couldn’t see his eyes, but he knew they were staring at him with dark intensity. Like an invisible search scope, he could almost feel their gaze boring into his forehead.

“Now that we have exchanged the usual unpleasantries, perhaps we should begin?” Lord Adrian suggested with uncanny ease.

Aaron nodded, as did Sarah Avan. She withdrew to the opposite end of the stage, where three empty chairs waited. Nemesis and the mystery man trailed her closely—protectively—as she took her seat. The hooded man sat down beside her. Nemesis remained standing. She crossed her arms against her chest and turned her alert eyes on the Selpes, surveying them with an air of assumed superiority.