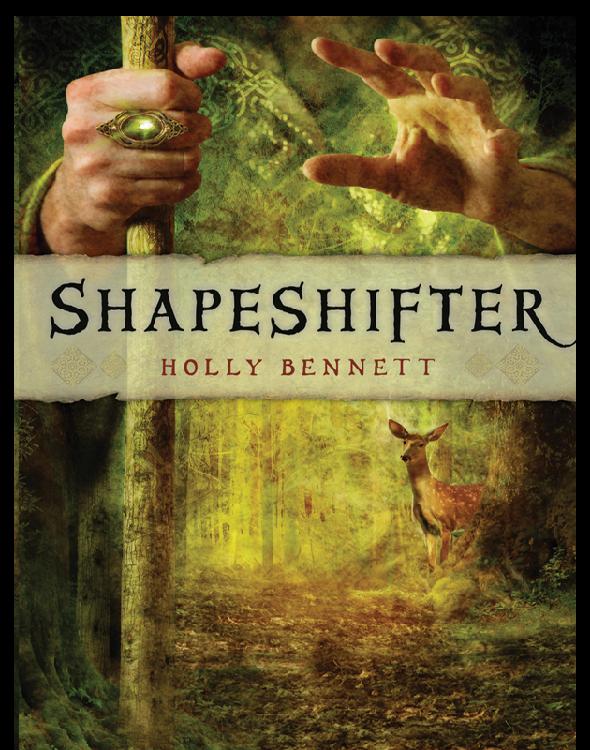 All rights reserved. No part of this publication may be reproduced or transmitted in
any form or by any means, electronic or mechanical, including photocopying,
recording or by any information storage and retrieval system now known or to be
invented, without permission in writing from the publisher.

Summary
: In order to escape the sorcerer who wants to control her gift of song,
Sive must transform herself into a deer, leave the Otherworld and find refuge in Eire,
the land of mortals.

Orca Book Publishers is dedicated to preserving the environment and has printed this book
on paper certified by the Forest Stewardship Council.

Orca Book Publishers gratefully acknowledges the support for its publishing
programs provided by the following agencies: the Government of Canada through
the Canada Book Fund and the Canada Council for the Arts, and the Province of British
Columbia through the BC Arts Council and the Book Publishing Tax Credit.

To my mom, who taught me that diving into a good book
is one of life’s great pleasures.

The Legend of Sive

T
hose of you who have read
The Warrior’s Daughter
will already know about my love affair with Irish mythology. But for the newcomers among you, here’s a bit of background:

Two thousand years ago, Ireland was inhabited by the Iron-Age Celts. Much of what we know of their lives and beliefs comes to us through the wonderful stories that somehow survived in oral form through many, many generations until finally they were written down by early Christian monks (who were supposed to be copying out the Bible).

Full of adventure, tragedy, magic and raw human emotion, these stories seem to me just begging to be brought alive for a modern audience. But since I am so often drawn to the secondary characters—the ones you don’t hear so much about—rather than the heroes, and since I love making up stories rather than just retelling them, my approach has been to imagine an “untold tale” that lies behind the legend.

Shapeshifter
is the story of Sive, a young woman from a magical realm who was the hero Finn mac Cumhail’s first wife. At first I thought it was a story about fear and lost love. But as I got to know Sive better, I realized that it is really a story about courage, and about love’s transformative power. Like any good character, there is more to her than first meets the eye.

For curious readers, I have included a version of the ancient legend of Sive on page 242.

The year Sive became a woman, two things happened that would shape the course of her life:

She found her animal form.

And the dark druid, Far Doirche, fixed his eye upon her.

S
he woke in the early dawn, the light still only a promise in the dissolving darkness. The woods called to her.

Sive had never been an early riser. In the otherworld land of Tir na nOg, there is no need to cut short the sweet ease of sleep. But this summer, the hush before sunrise filled her with expectancy. She loved to watch the world wake up, to see the leaves glow golden in the sun’s first rays. She left her warm bed, slipped out of the sleeping house and took the path to the forest.

By the time the sun spilled its bright warmth over the world, she was sitting in her favorite spot, a fallen log coated with moss as soft and deep as her mother’s silk cushions. It rested at the edge of a dark spring-fed pool. Soon, when the sun was higher and the breeze came up, the pool’s surface would dance with ripples and light. Now it lay still and smooth as polished copper. Many animals and birds came to drink at the pool, but Sive was no longer elated when they appeared, or disappointed when they did not. She was content just to sit and watch the water and breathe the fragrant air.

SHE HAD ROAMED THESE woods for years, ever since she had first told her father about the longing in her heart. To take on the form of a creature wholly different, to be utterly changed and yet yourself—this, she thought, was a true marvel.

“How is it done?” she had asked, and then added in an eager rush, “And don’t be saying I’m too young to understand. I’ve lost my first two milk teeth, and that means I’m no longer a baby.” Triumphantly, she pulled down her bottom lip as proof.

Derg peered at the pink, gummy gap and nodded solemnly. “So you have, indeed. Then I will tell you the truth: you won’t find your shape until you grow up, Sive. But that doesn’t mean you can’t do the work that comes before.”

“What work is that?”

“You must spend time in the fields and the forests, with the creatures there. Watch them, listen to them. Learn to understand them.”

As he talked, Derg pulled his young daughter onto his knee and played with the copper-gold waves that already reached halfway down her back.

“To become an animal, you must have a sense of kinship with the wild creatures,” he explained. “Shapeshifting begins with the ability to place your heart and mind within an animal’s skin. Only then will the skin itself take shape.”

Sive pondered this and then squirmed around to face her father. Her lovely face was intent.

“How do you choose which animal to become?”

“You don’t, daughter. Most of us have but one animal form; we become the animal most like our inner spirit. It’s true that the greatest shapeshifters can take on the form of several beasts, but always there is something about each animal that speaks to the essence of the person. We cannot become what is foreign to our nature.”

“What is your animal, then?”

Derg hesitated. Derg Dianscothach—Derg of the Quick Speech—was not a man of great power or ancestry, but his keen eye, quick understanding and artful tongue had earned him a place as the king’s counselor, messenger and, sometimes, spy. It would not do for his animal form to become common knowledge.

“It is secret,” he said finally. “Can I rely on you to keep it safe?” And with Sive’s solemn nod, he bent and whispered into her ear.

AT FIRST HER FATHER went with her to the woods. He taught her how to mark her path to keep from losing her way and which boggy, dangerous places to avoid. When he was convinced Sive could wander safely, he gave her leave to go alone—despite her mother’s objections. But it did not take her long to notice the magpie that flitted from tree to tree, seemingly paying no mind but never far from sight. She complained about the way Derg watched over her, but she felt safer for it too.

She was so tense and eager on those first excursions that her very presence frightened the beasts away. She would strain her eyes and ears and nearly tremble with alertness and rarely saw more than a tomtit. Any unsuspecting deer or otter that did come into view would bolt the second it noticed her presence. “Be easy, Sive,” her father would advise. “Be one of them. You would not get all excited if your sister walked into the room.”

Perhaps not, she thought. But I would not be easy either.

Sive’s half-sister Daireann was not the pleasant companion Derg saw. He thought it was kindness that prompted the young woman, on her rare visits from her father’s home, to take the time to play and talk with a little girl. But Daireann was a subtle tormentor, one with a need to feel grand by making others—even children—feel small. Sive had learned to be on her guard, to wait for her sister’s honeyed sting.

There was a game they played. “If I were an animal, what would I be?” Daireann would ask, and Sive would try to think of something clever and beautiful for her sister: a fox, a champion’s horse, a falcon. But although her sister preened at the flattery, it did not soften her tongue.

“Daireann says I will be a rabbit,” Sive told her father now. “Or a mouse.”

“Does she indeed?” Derg considered this apparent insult.

“Perhaps she says this because you are quiet and small.” He smiled at his daughter and shook his head. “But I believe she is wrong. You do have a gentle nature, something timid, perhaps, at times. But you are also strong and beautiful. Courageous too, at need.”

Sive glowed at his words. She had known better than to argue with Daireann, but she knew her father was right. She knew, too, what animal called to her above all others.

If it were given to her to change shape, she would become a deer.

ON THAT STILL MORNING, Sive was alone. Her father had not flown with her since the winter, for Sive’s mooncycles had begun and Derg knew her first change would not be far behind. That was a thing requiring solitude and not for another’s eyes to witness.

She was not even thinking of shapeshifting. She simply rested in the peaceful stillness that many hours in the woods had taught her. It was this peace, she had learned, that allowed the creatures about her to relax in her presence and go about their business right under her nose. She let the swell of early birdsong fill her, let her eyes be lulled by the gentle motion of the leaves floating on the pool.

The underbrush trembled, and a red doe stepped into the clearing. She froze, lifting her black nose to check Sive’s scent. Sive remained still, feeling the doe’s caution and her curiosity, feeling her thirst. After a long moment, the deer picked her way down the muddy slope to the pool. And then—Sive could not keep her heart from tripping faster in a rush of delight—a young fawn, dappled with its white baby spots, came after its mam. All spindly legs and wide brown eyes, he braced himself on the bank beside his mother and lowered his muzzle to the water, whiffling uncertainly at its cold touch.

It was a moment of pure magic, watching that fawn learn to drink. Sive was filled with joy, as though it were her own baby’s clever trick, as he stopped trying to suckle at the pool and instead lapped slowly with his tongue.

The fawn looked up from his drink, water streaming from his muzzle, and noticed Sive for the first time. It was comical how he started and stared. His mam startled, too, at his movement, and Sive thought they would both fly off, but after a quick check of the wind, the doe went back to her drink. Reassured, the fawn gazed at the girl and then with a friendly little tail flick began to skirt the pond toward her. He was unafraid, as though ambling over to meet one of his mam’s herd mates. Sive was enchanted and then suddenly alarmed.