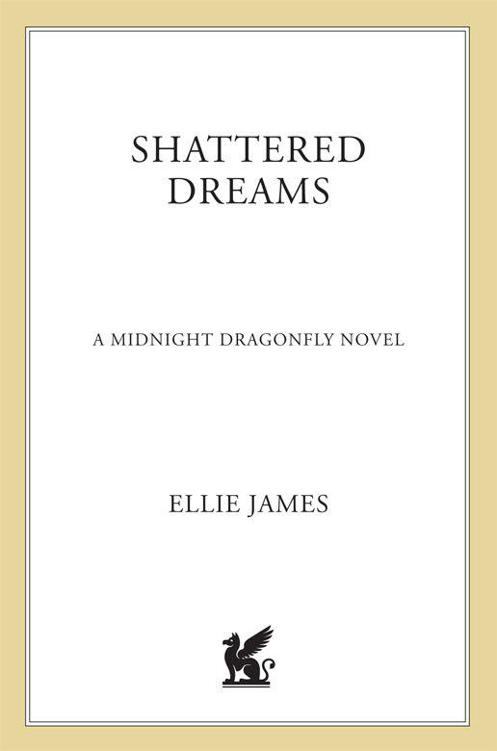 For my four favorite girls: Brittany, Victoria, Grace, and Elizabeth …

This book would not have been possible without the insight, support, and encouragement of so many people:

My awesome agent, Roberta Brown, for belief, wisdom, and inspiration.

My fabulous editor, Holly Blanck, for sharing my vision, and knowing how to make it so much better.

My super talented friends, Catherine Spangler and Linda Castillo, for always being there to answer questions and give advice.

Faye, for all things New Orleans.

Jeffery, for all things
Halo
.

My sweet friend Dawn, for gracing me with an early read.

And most of all, my husband and children, for overlooking all the things that didn’t get done while I was happily lost in Trinity’s world, and loving me anyway!

Stepping around a huge old oak, I lifted my flashlight … and saw the house. Everyone else kept tromping through knee-high weeds, but something held me there, totally still, while Spanish moss slipped against my face.

The abandoned Greek Revival rose up against the moonlit sky like something ripped straight from the picture book my grandmother used to keep on her coffee table. Surrounded by seriously old trees and nearly covered by vines, it was big and boxy, with massive columns and wide porches. Once the place had probably been white. Even at night I could tell that. But now it was dirty and worn out. Tired.

It was an odd word, but there you go. Alone. The old place with its dark windows and peeling siding looked like it was …

A warm breeze blew off the river, but I hugged my arms around myself as I watched them—Jessica, the stupidly beautiful cheerleader; her way-too-skinny best friend Amber; Jessica’s little sister Bethany; and the guys: Chase, the quarterback (and my chemistry lab partner); Drew, who rarely said more than two words at a time; and the massively tattooed Pitre—making their way toward a broken window. They weren’t that far away, but they might as well have been in another state.

At the steps leading to the porch, Jessica swung back to me. She was the one who’d invited me to tag along. “What’s the matter, Trinity? You’re not scared, are you?”

My throat tightened. I wasn’t scared. That wasn’t the right word. Just … uneasy.

“Just taking it all in,” I said, forcing my legs to move. Beneath my flip-flops I felt stuff crunch. I didn’t want to know what.

Amber made it to the window before she turned back. “Last year,” she said, her eyes glowing, “these two seniors came here—”

“Amber!” Jessica shot her friend a
shut-up
look. “What are you trying to do? Make her leave?”

That would be a yes. I was the new kid, after all. On the first day of school when the teacher had said Trinity Monsour, everyone had turned to stare at me, obviously sizing up the new girl. Being from Colorado made me an outsider, but at least I looked like I belonged. With long dark hair and dark eyes, skin my grandmother called olive, a T-shirt and low-rise jeans, I could have been Jessica’s twin.

“Leave?” Amber said. “No way.” And with that she slipped into the darkness beyond the broken window.

Two of the guys—Drew and Pitre—followed. Jessica waited until I reached the big bushes obscuring the porch before taking Chase’s hand and tugging him toward the darkness. Bethany shot me a nervous look, but followed anyway.

I recognized the voice as belonging to Amber. Sidestepping broken glass, I reached the tall window and lifted my flashlight, looked inside. They all stood there, waiting.

There was that word again.
Waiting.

And with it my throat tightened.

Or maybe that was because of what I saw behind them, neat little piles against the far wall.
Ashes.

“Of course,” I said against a slap of warm air. Until New Orleans, I’d never known air could be so thick. Breathing was hard enough, but my hair! It had been straight in Colorado. Here it was a frizzy mess. My aunt kept saying I would get used to it, but I think she was just saying that.

She does that a lot, tells me I’ll get used to things. But I’ve seen that look she gets in her eyes, the worry.

“Then what are you waiting for?” Through a mass of perfect, coffee-colored ringlets, Amber’s smile looked more like a smirk. “Want Chasey to hold your hand?”

Jessica’s eyes narrowed, invisible claws coming out for the thousandth time since she’d discovered her boyfriend and I were chemistry partners. Just because we had an out-of-class assignment—

But that was another story.

She eased closer to him, inserting herself between him and me. Through the play of shadows his eyes met mine anyway, forcing me to look down at an empty fast-food bag trapped by a rock.

I so knew he was taken.

I also knew I did not want to go into that house. Everything inside of me screamed for me to stay right where I was. But I rubbed my palms against the amazing Rock Revival jeans I still couldn’t believe Aunt Sara had bought for me, and stepped to the broken window.

(If anyone had told me back on my birthday in April, that six months later I’d be breaking into a deserted mansion in the Garden District of New Orleans in the middle of the night with a bunch of teens I barely knew, I would have thought they were on serious drugs.)

The cold hit like a punch to the gut. I must have staggered from it because Chase lunged for me, his arms reaching out. The warmth of his hand practically seared through the invisible blanket of ice suddenly covering every inch of my body.

Not in front of these people …

I stopped the thought, knowing I couldn’t just stand there like an idiot in a trance. No one else heard the buzz. No one else felt like they stood in a freezer. My flashlight showed the sheen of sweat on Chase’s forehead. Everyone had on tank tops—Jessica’s was plastered against her chest. No one was shivering.

And only on the inside.

With a pretend laugh, I stepped from the warmth of Chase’s hand and again rubbed my hands against my jeans. I didn’t bother looking at Jessica. I knew she’d be glaring in that she-animal way of hers.

“Holy crap.” I gagged on my first full breath inside. Mud and smoke and stale whiskey mixed with something else, something really foul. “How old
is
this place?”

“Wow.” The beams of our flashlights jumped through the pitch-black room, creating a strobe-light effect. I could only catch pulsing glimpses. Floor. Darkness. Empty water bottles. Darkness. Peeling walls.

By the time I caught detail, it was gone.

Refusing to let my hands shake, I played it cool and lifted my light to the far wall, and saw the tattoo. Well, not really a tattoo, graffiti was more like it, intricately painted over the faded image of a paddleboat on the river.

The heart was done in black. A red cross ran through the top, with some kind of weird swirl design and grid through the middle, like something you’d see on someone’s arm.

Actually, I was pretty sure I
had
seen it.

“Before Katrina,” Amber said, strolling over to dominate the circle of light, “you could still see the blood.”

Blood?
Inside, mine ran cold.

“You still can, dimwit,” Jessica said. “This place didn’t get any water.”

“Omigod—”
That was from Bethany. I twisted around, found her staring at the back corner. She was really pale—and really glued to Chase. His eyes were narrow, his dimples gone. “W-what’s that?”

With my light I followed her line of vision to a small collection of sticks piled on top of each other.

Except they weren’t sticks.

I swallowed hard as Bethany let out some kind of strangled sound. “I don’t think—”

“No one’s making you stay,” Jessica pointed out before her sister could finish. “If you want to leave…”

“Probably an animal.” Chase’s voice held absolute calm. “They like to die alone.”

Bethany, a smaller, less sexy version of Jessica, looked up at him as if she wanted nothing more than for him to be right. It was so painfully obvious how badly she hung on his every word. His smile was warm as he gave her a brotherly pat on the back.

I was quite sure it broke her heart.

Around us darkness throbbed, and with every warm breath of wind, the old house groaned. The place was huge. I had no idea how many rooms there were, or who (or what) else could be inside.

The urge to move was strong. To leave. The stillness felt … wrong.

“I thought everything flooded,” I said, stepping toward the wide hallway that cut through the middle of the house. I’d only been a kid, but my memories of the hurricane were vivid. My grandmother had been glued to the coverage, her eyes worried, her hands fisted together. I’d never seen her like that, and it had freaked me out.

It wasn’t until Gran died that I understood why.

She’d never been one to talk about the past, had always said,
Triny, ain’t no point lookin’ backwards.
But I’d never really thought much about it. Maybe because I didn’t have much to look back at. My parents died when I was little—I didn’t even have any pictures of them, didn’t have any brothers or sisters. I had never been anywhere besides the Colorado mountain where Gran raised me, had never even seen an ocean.

Gran always made everything sound simple.

Never, not even in the aftermath of Katrina, had she mentioned that she’d been born in New Orleans and had lived there for fifty-one years, until my parents died.

I guess that made sense. That was, after all, sort of why I was in New Orleans. Of course, being an orphan and having no living family besides an aunt I’d rarely seen was the much bigger part.

At sixteen, I was coming to realize there were some wounds you never got over.

The old house knew, too.

“… Garden District and French Quarter are on higher ground,” Chase was saying. His voice was warm, like some kind of drugging anchor I wanted to grab, but I knew how disastrous that would be.

Cienfuegos by Alberto Vázquez-Figueroa
Mickey & Me by Dan Gutman
Black Guard, The by Daems, C. R.
Love and World Eaters by Tom Underhill
The Cost of Lunch, Etc. by Marge Piercy
What's In It For Me by Nelvie Soliven
Innocent Birds by T. F. Powys
Forever by Allyson Young
PHANTASIA by R. Atlas
The Name I Call Myself by Beth Moran